From Zurich to Kempten

A last morning in Zurich

View from the Lindenhof

Having decided to catch the 13.09 train to Kempten (which meant only one change, not three!) we had a final morning free in Zurich. Yvonne and I set out after breakfast to explore together.

We started with a short walk down to the lake, but the weather was cloudier than of late and the mountains hidden by cloud. My photography for the time being had to be confined to details. 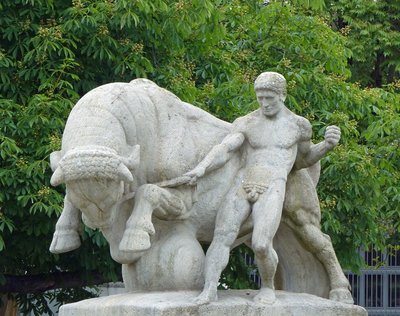 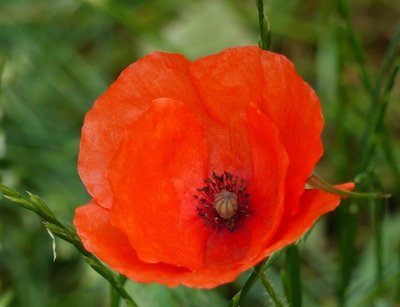 A cloudy start to the day 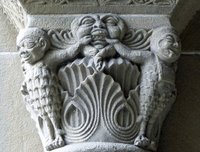 In the former cloisters

So we walked back up the opposite bank to the Fraumünster where we stopped off to look again at the frescoes by local artist Paul Bodmer in the passageway alongside (part of the former cloisters), which tell stories from the history of the city. There we were approached by a man who offered to tell us more about the pictures which we agreed to - and when he said more, he meant more!

Alex Hansen has clearly made it his life's work to study them in depth (he has even written a thesis about them) and for the next 45 minutes or so he described not only the stories told by the pictures but also many theories about the artist's use of symbolism within them. As the artist left no written record about this we have no way of knowing to what extent he was interpreting this correctly, but it made for a fascinating encounter. 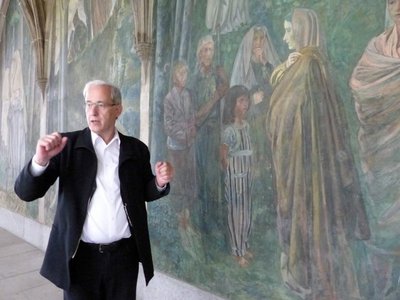 Our guide to the frescoes

There are several different stories told in these murals. One set tell of the founding of the convent, to which the Fraumünster was the abbey church, by two sisters, Hildegard and Bertha, daughters of the Emperor Ludwig. According to a legend, they were led to this spot by a deer with glowing antlers. Another set tell the story of the city’s patron saints, Felix and Regula, which I repeated in an earlier entry in this blog: Exploring the city. The remaining images, in the section nearest the river, relate tales of Charlemagne. 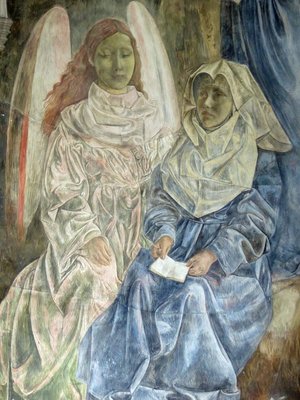 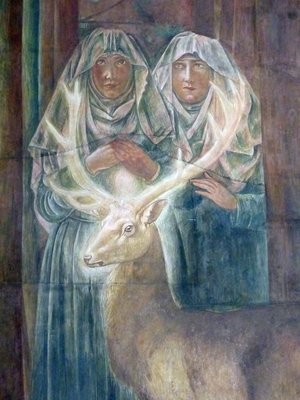 The story of Hildegard and Bertha 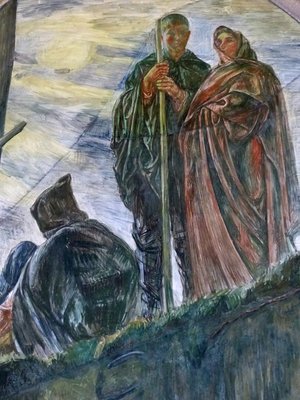 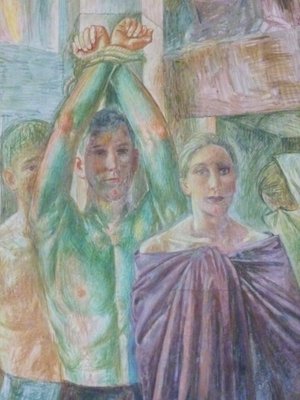 The story of Felix and Regula 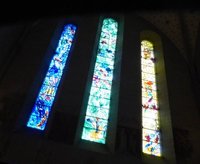 Oops, I took a photo!

After we finally left our new acquaintance I paid the 5 francs to go into the church, mainly to see the famed Marc Chagall windows. These date from 1970. The three central ones at the eastern end of the church depict (from left to right) Jacob wrestling with an Angel of the Lord, the story of Christ (from birth to crucifixion and ascension), and the End of Days or Zion. Either side are (to the north) a depiction of several of the Prophets and (to the south) Moses with the Ten Commandments setting out God’s Law.

The organ was playing which added to the atmosphere, and being quite early still there were no large groups, but I resented (as I always do) the prohibition on photography, even without flash. As it happens my camera shutter may just have fired once ? For better photos and a full description of the windows, have a look at this website: Sacred Destinations.

We stopped for coffee at a small café in a corner of the square overlooking the church, the Münsterhof. While we sat we were treated to a peel of bells from the Fraumünster, so I shot a short video to capture something of their sound.

We also checked out the building on the eastern side of the square, formerly part of the University of Zurich and before that the guild house of the Zunft zur Meisen, the guild of innkeepers, saddle makers and painters).

From its balcony fronting the square Sir Winston Churchill gave his famous speech, in September 1946, about the post-war rebuilding of Europe, popularly known as his “Let Europe Arise” speech – a speech in which he called for a sort of United States of Europe to be based on a partnership (at the time unthinkable) between France and Germany. Interestingly, given recent events, he said that Great Britain would not be part of the United States of Europe but would assist in realising the project.

On a nearby wall a small carving of a camel caught my eye. This is the sign of the “Zunft zum Kämbel”, one of Zurich’s medieval guilds, marking their former guild house here (the current one is the Haus zur Haue building on the opposite bank of the Limmat, near the Rathaus). Despite the symbol, they traded not in camels but in food and wine!

We then wandered the nearby streets till it was time to head back to the hotel. Our walk took us past St Peter's, with the largest church clock face in Europe. 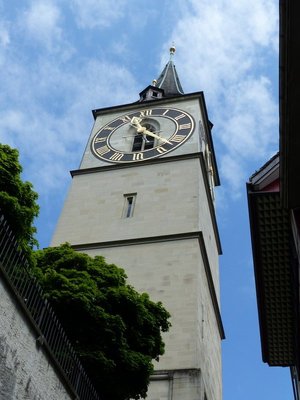 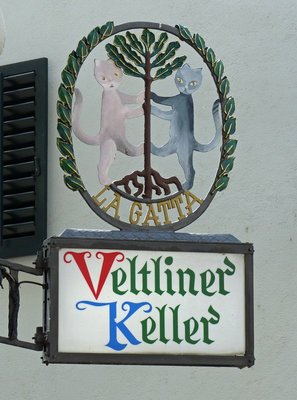 From here we walked up to the Lindenhof (the former site of the Roman castle) for views of the city, by now bathed in sunshine. A fountain here commemorates the 1291 defence of the town by its women against Albert I of Germany. This is a popular spot it seems for both locals and tourists, so expect to wait for your chance to take photos of the views! 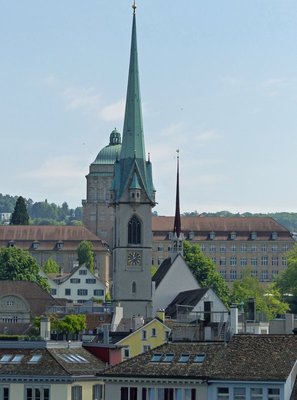 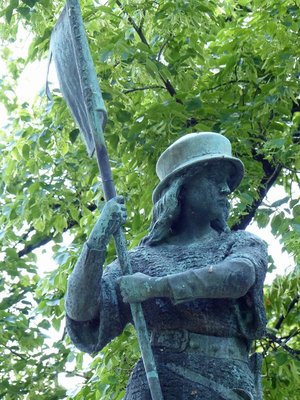 The Lindenhof - view and fountain

We retraced our steps to the hotel, collected our bags and took the tram to the station where we met up with the others as arranged.

The journey to Kempten went smoothly, with just one change at Lindau where we should have had 20 minutes to spare but owning to late running of the first train had only ten - but as it is such a small station this wasn't a problem. The scenery around there looked especially lovely so we looked forward to visiting later in the meeting. 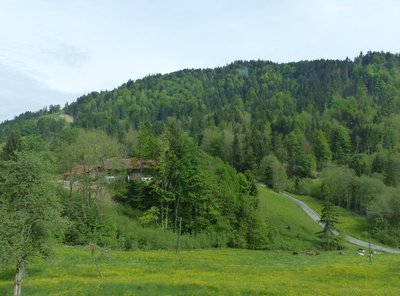 Scenery from the train

Arriving in Kempten around 16.30 we took taxis to the hotel, the Bayerischer Hof. This lies on the edge of the town centre by the river, surrounded by mature trees. While it was a bit of a disadvantage to be quite a walk from all the action, the location was peaceful. I had asked for a quiet single room when making my booking and liked my small room with a view of the surrounding trees and early morning sound of birdsong. The bed was comfortable, if small, and the bathroom had everything I needed. The mini-bar was well-stocked, with a charge of 1.5€ for any item, which struck me as very reasonable, and there was a complementary bottle of drinking water replenished each day. 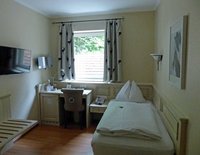 In the evening we walked into the town to seek out some of our friends staying elsewhere and also of course dinner. Our first choice of restaurant hadn't any room for us but luckily Larry and Mark had spotted an alternative, the Goldene Traube, which had plenty of room We had a long table in a side room (I felt a little sorry for the only other two people eating there, at least until later when a group of local musicians also arrived). 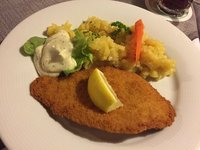 The food was good and also good value, seeming very cheap in fact after what we had been paying in Zurich. I had a nice piece of plaice with excellent Kartoffelsalat and a couple of dark beers for just 16 euros. Other friends gradually joined us as the build-up to the Virtual Tourist Euromeet gathered pace. 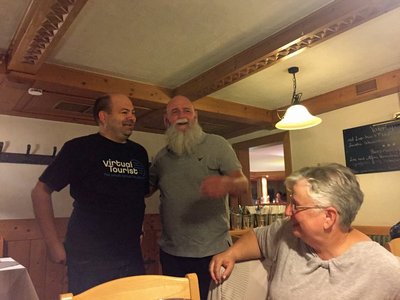 Our host in Kempten, Christian, joins us for a beer

The Euromeet proper would start tomorrow …

I love reading your entries Sarah as it brings the whole day back with such clarity. I really enjoyed the photo of Alex as it completely encapsulates his enthusiasm about his subject. Already looking forward to reading your next post.

Wow, you got in quick Yvonne - I was still busy editing to get the photo layout as I wanted it ;-)

Thank you again for your company on that morning. I'm so glad you're enjoying reliving the memories with me. The next post will hopefully follow tomorrow ...

A beautiful representation of Kempten :D What a lovely trip we had, Sarah :D

You had a very busy morning. That sounded more like an entire days activities

I'm puzzled as to who left the last comment here - care to reveal yourself?!

Hi Larry - no, it was pretty leisurely stroll actually, with time to sit over a coffee part way :-)

Another enjoyable read thanks Sarah

Thank you for visiting, Albert. The frescoes were lovely but the encounter with Alex and his stories made them more so for us

Ah, there it is - Fraumünster and the windows. Thanks for the description of the frescoes, I'll definitely have a look at them! Thanks so much for your description of Zürich :-) So good that you are continuing writing, with VT gone.

If you visit the murals Ingrid do look out for Alex Hansen. I suspect he is there most days and I think you would find him interesting to listen to, as long as you can spare the time

And oh yes, I am continuing, and happy to be blogging here

I am just reading this and reliving our time in Zurich and Kempten. And how nice to be remembered for finding the restaurant for our first night in Kempen. It's always fun to find your name in some one else's blog.

Thanks Larry - one of the joys of blogs is the opportunity they give to relive special times, and your comment prompted me also to read through and remember the fun we had at these meets!