We hit the road!

Goodbye to Seattle (for now) 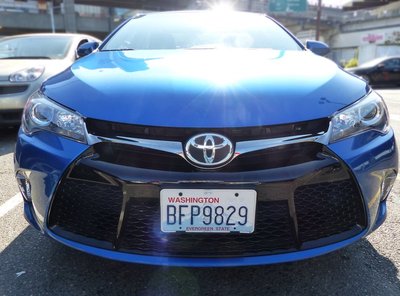 Our shiny Camry at the start of the trip
(not so shiny at the end!)

Time to leave Seattle and head out on the road! After an early breakfast at the hotel coffee shop we checked out and called the car hire company, Enterprise, to arrange for their shuttle to collect us. However, the shuttle was apparently backed up with cruise passengers (we saw later that there were three large ships docked) so we were advised to take a cab, the cost of which they would refund - very helpful.

At the Enterprise office, the paperwork was quite quickly completed and we were on our way in our bright blue Camry, having been offered a choice of several cars (Chris had driven a Camry on a previous trip and been happy with it). Incidentally, we were very impressed with Enterprise – a convenient downtown location, quick and helpful service on both collection and return of car, and very competitive prices compared with others in Seattle that I had checked. We will use them again, I feel sure.

We negotiated the city traffic (Chris driving, me as navigator) and after once missing a turning, managed at a second attempt to reach the ferry terminal. We had a 45 minute wait for the next Bainbridge Island ferry. Once on board we were able to leave the car and pass the 35 minute crossing up on the passenger deck, enjoying the views out on Puget Sound. 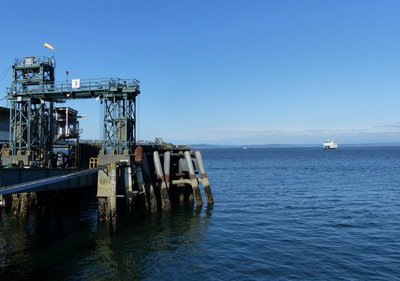 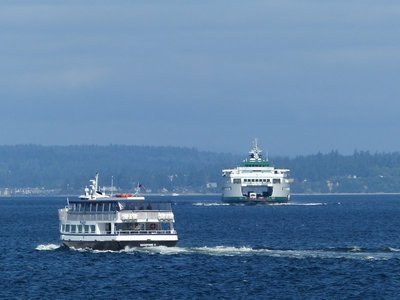 Our ferry approaching (on the right) 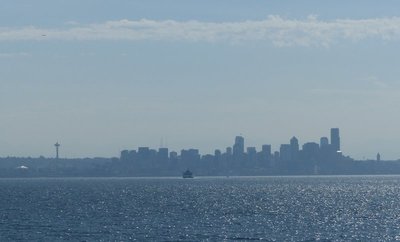 View back towards Seattle 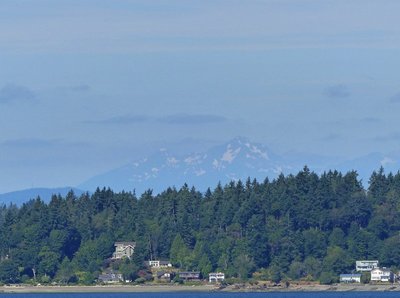 Our first stop after driving off the ferry was in Winslow, right next to the Bainbridge terminal. We found a nice coffee shop, Pegasus, and topped up our caffeine levels - rather needed as although we had both slept much better, the body clocks had not yet fully adjusted to the time difference and we had been awake since 5.30! After our coffees we took a short stroll by the water where I was pleased to see what I thought was an elegant grey heron fishing (one of my favourite birds). But even better - my VT/TravellersPoint friend Sally (Beausoleil) tells me that this is a Great Blue, a bird I have never seen till now. How exciting! There were also some quirky stone sculptures of people doing handstands, pulling chains or simply sitting or standing. 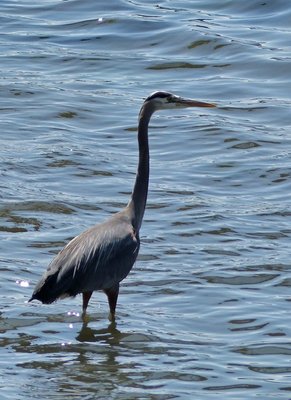 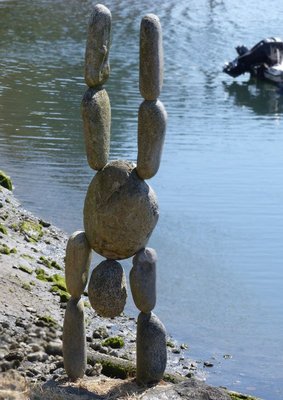 By the waterfront in Winslow

From Winslow we drove to Suquamish, to pay our respects at the grave of Chief Seattle (although his name is more accurately represented in English as Sealth). He was the leader of the Suquamish tribe in the mid nineteenth century and has become famous for a speech he is popularly supposed to have made which emphasises the importance of the environment and man’s connection to it:

‘Man did not weave the web of life; he is merely a strand in it. Whatever he does to the web, he does to himself.’ 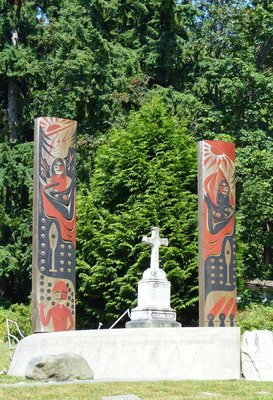 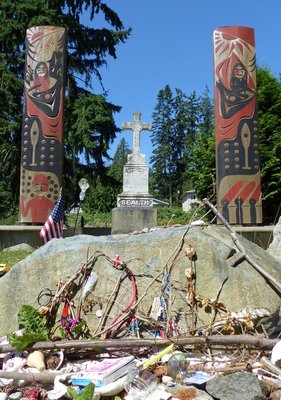 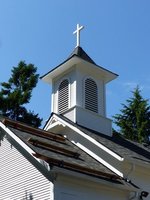 Chief Sealth was an important trading partner for Doc Maynard, who established the trading post on the Puget Sound which grew to become a great city, named for its founder’s friend – Seattle. When he died in 1866 he was buried in this peaceful cemetery behind a small mission church, St Peter’s, having been baptised (possibly through pragmatism!) in 1838. The graveyard looks across the Puget Sound to the city that still bears his name.

After visiting the grave, which is surrounded by all sorts of odd objects brought as gifts or in supplication (beads, toys, flowers, foodstuffs, ornaments), we made a quick stop by the waterfront in Suquamish, where we saw some attractively painted traditional canoes in the boathouse next to the community centre. 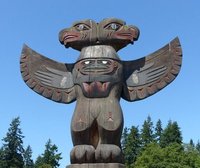 Totem pole and canoe in Suquamish

We skipped the Suquamish museum however, in favour of an early lunch in Poulsbo, a few miles further down the road. This is a slightly odd place which has gone overboard in celebrating its Norwegian heritage. 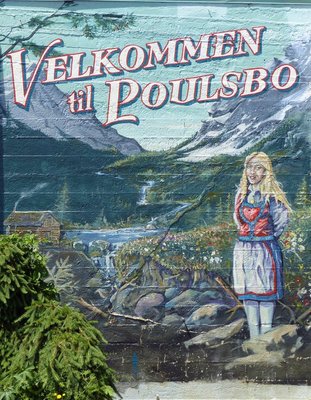 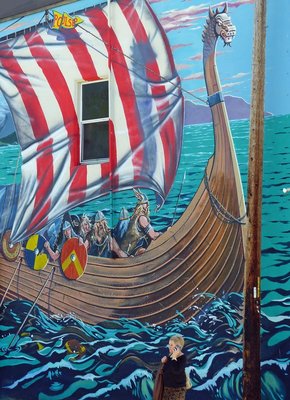 We had a sandwich in the relatively low-key Poulsbohemian Café, washed down with delicious homemade lemonade flavoured with lavender honey, before exploring the town a bit.

There are Viking longships adorning the benches on its streets, parking lots are provided courtesy of King Olaf, and most of the many quaint and arty shops follow the theme. 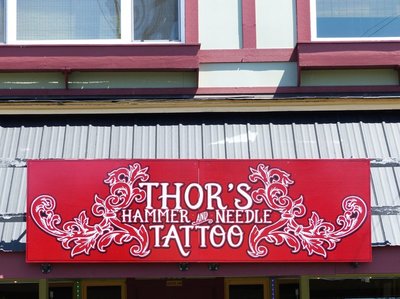 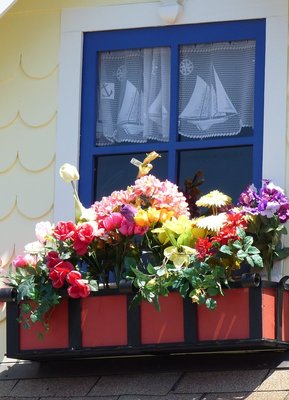 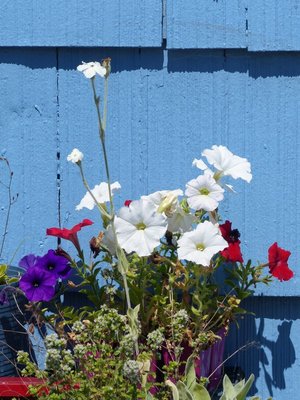 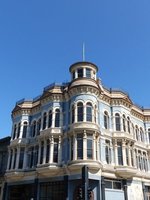 Then it was back to the car for the last leg of our drive to Port Townsend, a well-preserved Victorian waterfront town. With its safe harbour this was in the 1800s an important shipping port, and grew rapidly throughout the 19th century as it was marketed as the ‘City of Dreams’ – set to become the largest port on the west coast, outstripping even San Francisco. That never happened, but it was for a while a thriving port. But when the railroad passed it by in favour of other towns in the region, the boom was over and the city fell into decline.

This decline happened relatively rapidly, with the place becoming such a backwater that none of its Victorian buildings were torn down or redeveloped; instead they stood neglected but intact for nearly a century, until the 1970s, when the town was rediscovered by artists, city-dwellers looking for a more tranquil or alternative lifestyle, and retirees. Today it is thriving, its Victorian waterfront listed on the National Register of Historic Places, as are many of the old homes in the residential district of the upper town.

We had reserved a room at an old Victorian hotel, the Belmont, situated above the old saloon of the same name in the lower town. Although we had arrived here well before the advertised check-in time we popped into the restaurant below to announce our arrival and were told that our room was ready. Heading upstairs we found a large room, the very definition of 'faded grandeur'. The ceiling was high, the upholstery on the wing chairs shiny with wear, the wallpaper chintzy and there was a real patchwork quilt on the bed (wedding ring pattern, for those who share my interest in such things!) 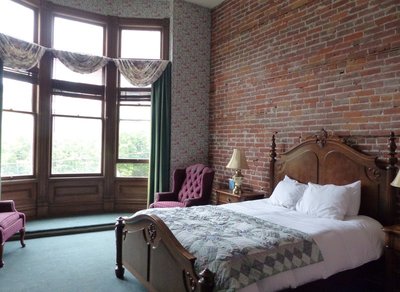 Our room at the Belmont Hotel 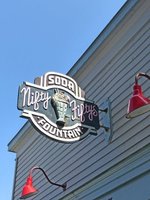 Our large bay window overlooked Water Street, the main street of this part of Port Townsend. The historic area of town is divided into an upper and lower part. The former is perched on a bluff and was the smart Victorian residential area, its old houses also still well-preserved today. Or so I understand, as we confined our explorations to the more workaday lower town, its handsome old business premises (banks, warehouses, stores etc) now home to lots of interesting shops and galleries. We browsed some of these and stopped for ice cream at the Elevated Ices parlour where a deck overlooks the channel busy with boats of all sizes. 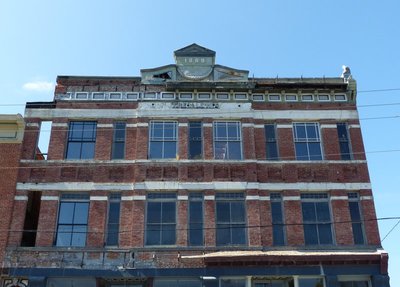 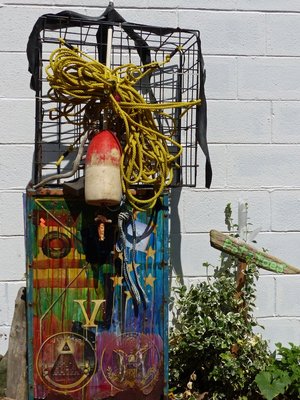 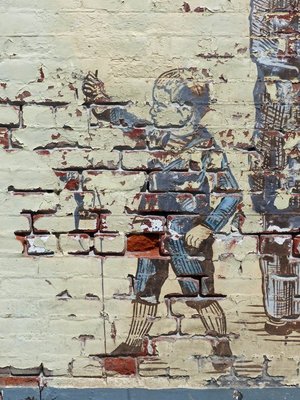 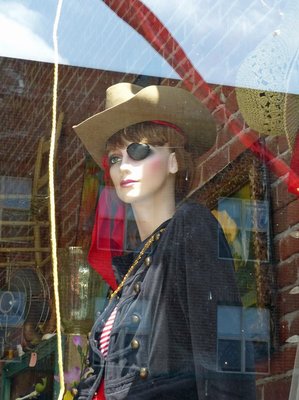 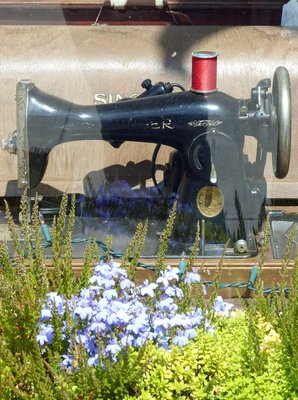 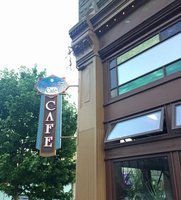 Later that evening we had dinner in the Silverwater Café on Taylor St, just around the corner from our hotel. We had booked a table earlier which proved to be a wise move - they are clearly very popular and there were several groups waiting for a table.

Judging by what we ate they deserve that popularity. We shared a couple of Dungeness crab cakes to start with, which were excellent. I then had the ahi tuna which was covered with lavender and crushed pepper and cooked very rare - beautiful! Chris liked his fettuccine Alfredo and also the local porter that he drank, while I had a glass of a Sauvignon Blanc from Walla Walla - a very good choice to accompany my tuna.

The service was good and we were very happy to be seated right by the window, as the back of the room looked a little dark. Our bill came to $72 without service - dearer than our previous two dinners on this trip, but reasonable for the quality of the food, we felt. 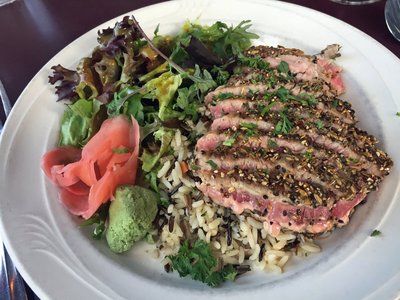 Then it was back to the Belmont Hotel for an early night, to try to catch up on that lost sleep! Tomorrow we were headed for the Olympic National Park …

Interesting about the Suquamish chief and a great saying! It looks like a very varied place to explore, with lots to see. I am not sure about the King Olaf.... did you mean Olav?

The Camry is a good car. We hired one once in the USA. Lovely blog article.

Grete, I don't think Olaf is a real king - just some character made up by the town council

Hi. I'm enjoying your tour. BTW, that is not a grey heron at the top. It is the great blue heron. It is an American species and is very similar to the European grey heron but there are some differences. We have quite a few in the rice fields near us and I love them. They are so much harder to spot than the white herons who really stand out in the bright green rice fields.

I hope you had some Poulsbo bread while you were in Poulsbo. It's fabulous. It's sold all over the northwest.

Your photos are wonderful. It looks like a lovely area to visit with a very fun hotel. The quilt was great.

Thanks so much Sally :-) I don't think I've ever seen a Great Blue so I'm thrilled with that - and will change my text accordingly.

I guess the bread in our sandwich could have been Poulsbo bread - it was certainly very good :-)

Your description of Port Townsend reminds me of Bruges/Brugge, Belgium, where a rapid decline (after the harbor entrance silted up) actually helped preserve the old buildings.

Hi Don - yes, the principle sounds the same, doesn't it? Thanks for your visit

And again thank you Albert