A day on the lake 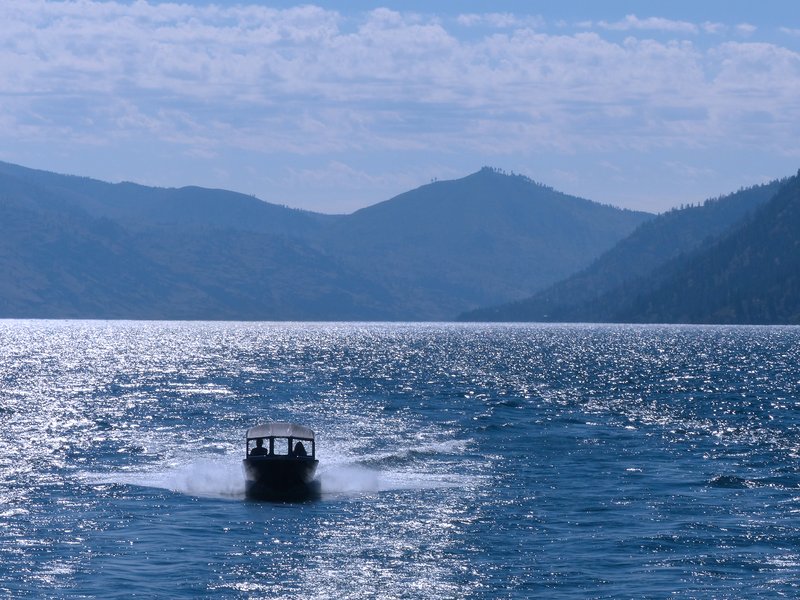 Those staying at the Riverwalk Inn get a 20% discount in the café but we would in any case have breakfasted there, because of its convenient location and extensive menu. The former was particularly important today as we had a boat to catch!

Chelan is situated at the south eastern tip of the lake that bears the same name. This lake is the third deepest in the USA (after Crater Lake in Oregon and Lake Tahoe in California) and the largest in Washington State. Its depth (a maximum of 1,486 feet or 453 metres) is all the more remarkable given its narrowness, with an average width of just one mile and length of over fifty miles. I had assumed wrongly that it was created artificially by the building of the Lake Chelan Dam in 1927, which we had passed yesterday, but that only served to deepen an already large lake which was formed by two glaciers. As a result of their action the lake is in some ways two lakes in one, with two distinct basins separated by a ridge or sill. The lower basin, Wapato, is the smaller and shallower of the two, with a maximum depth of only 400 feet (120 metres), while Lucerne, at 38 long with an average depth of 1,148 feet (350 metres), is by far the larger of the two. The town of Chelan sits at the southern tip of Wapato. 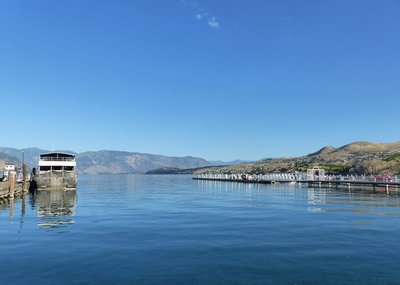 The Lady Express at the Chelan landing

At the opposite end of the lake to Chelan is Stehekin, which lies within the North Cascades National Park and is inaccessible by road. The only way to get there is by boat, either as a day tripper or for stays in the lodge or other accommodation offered there. We had reserved tickets for a day visit, travelling 'up lake' (as they say in these parts) on the faster of the two boats that ply the route, the Lady Express, with an 8.30 departure. The second boat, Lady of the Lake II, also leaves at that time but takes four hours to make the journey, stopping in several places en route, whereas the Lady Express only stops once and takes 2.5 hours. By travelling up on that boat and returning on the Lady II, as we did, you can maximise your time in Stehekin. The different combinations of tickets available give you either 60 minutes, 90 minutes or three hours there. 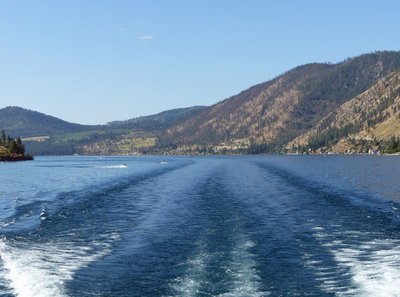 Water sports in the Wapato Basin 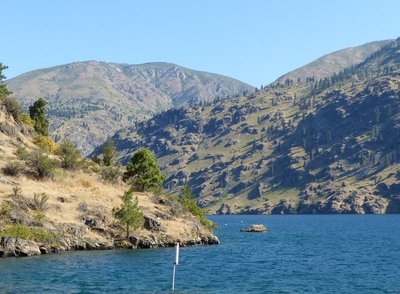 With another hot sunny day forecast we made sure to board the Lady Express promptly and secured shaded seats on the upper deck. The outward voyage passed pleasantly, and we enjoyed watching the passing scenery. The first part of the lake, known as the Wapato Basin is less deep and is the focus for human activity, with houses built along the shore and lots of boating etc. After passing the point known as the Narrows (for obvious reasons) you are in the larger upper part, the Lucerne Basin. This holds 92% of the lake's water, 5% of which is below sea level. There are no roads along the shore here and very few buildings, with the scenery mainly consisting of rocky hills dotted with pine trees. Ahead of us as we journeyed up the lake were the taller mountains of the North Cascades, with patches of snow lingering well into July. 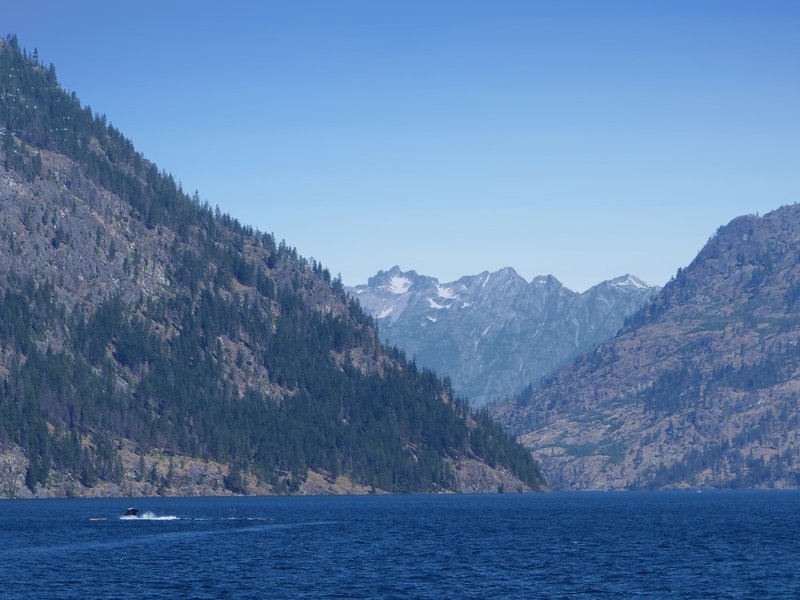 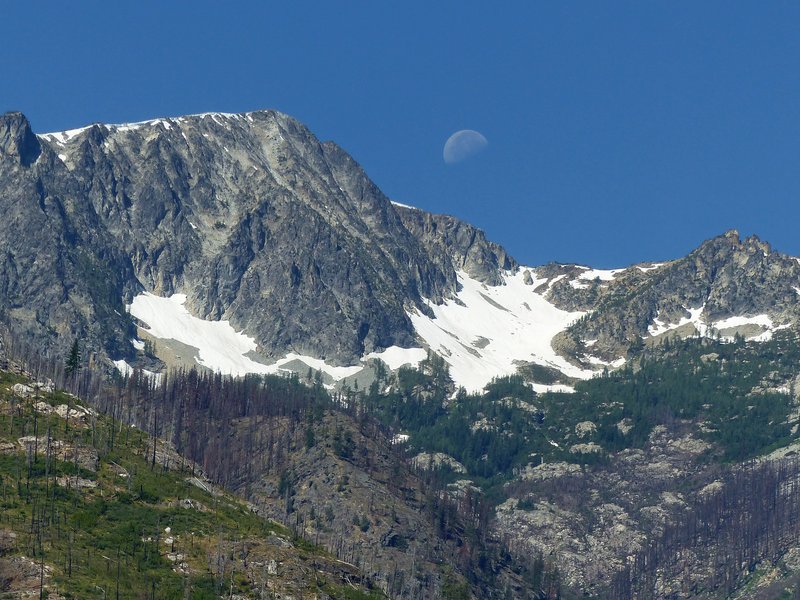 Mountain views from the Lucerne Basin 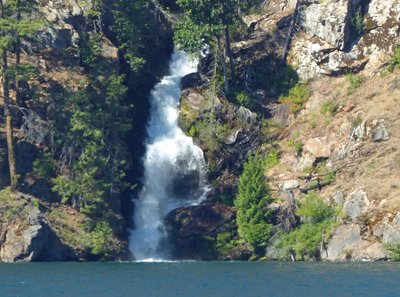 Waterfall on the lake 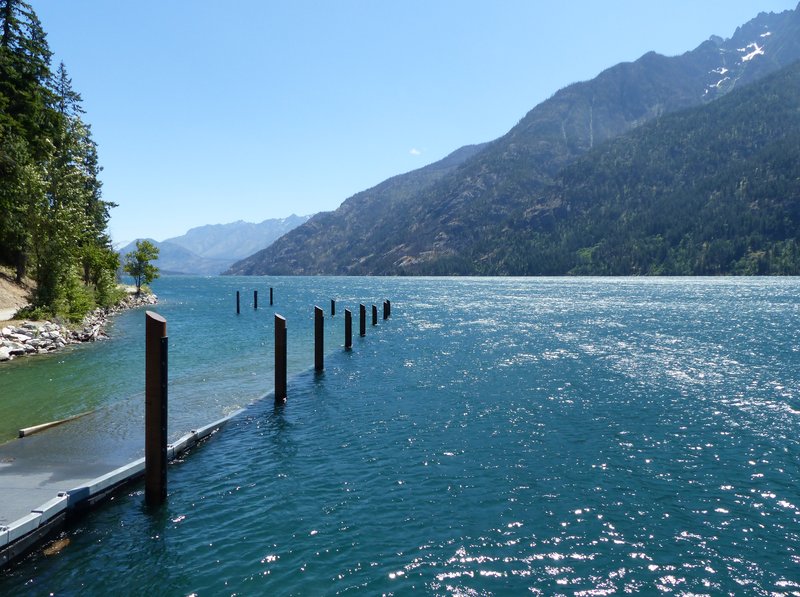 The Lady Express at Stehekin

We arrived in Stehekin at about 11.00 AM. We had decided to do the short bus trip to Rainbow Falls offered by the NPS (at a cost of $10 per adult) so we went straight from the boat to the red bus waiting nearby. The tour has to leave promptly as some passengers are likely to be travelling back to Chelan on the Lady Express's midday departure.

The bus driver also acts as guide and as we drove to the falls she told us something of life in Stehekin, which has a year-round population of just 85 (swollen by an influx of summer workers each year). There is a school with (currently) just seven pupils, a post office and just four miles of paved roads with a single stop sign! Everything the residents need has to be delivered by boat - the Lady of the Lake II for smaller items (such as groceries) and a barge for large items such as cars.

When the bus arrived at Rainbow Falls we had about 25 minutes to explore. A short path leads to a spot with good views of the waters near the base of the falls, and you can also climb further and get closer. Watch out for the spray if you do this - I rather liked its cooling effect but had to be careful to keep my camera dry. The falls are 312 feet tall and although we didn't see the rainbow in the mist that gives them their name, they were spectacular enough. 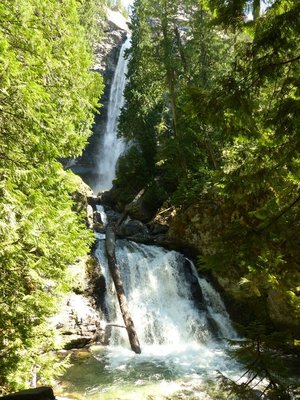 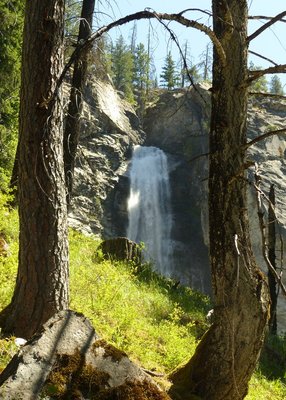 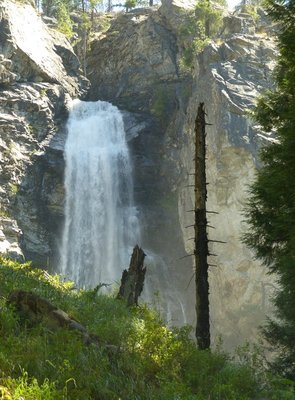 On the path to the upper viewpoint 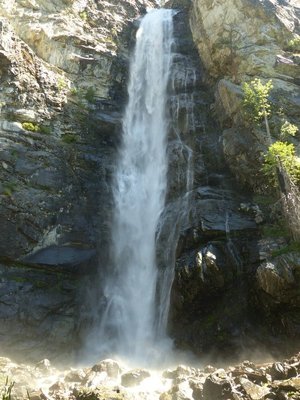 When the bus returned us to the dock area we went to the small store attached to the lodge and bought some cold drinks and snacks. We took these up the path to the Visitor Center and enjoyed our 'picnic' on a shady bench near there, with a great view of the North Cascade mountains in the distance. 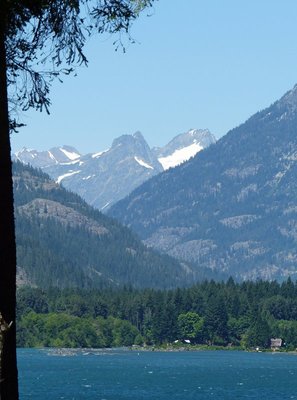 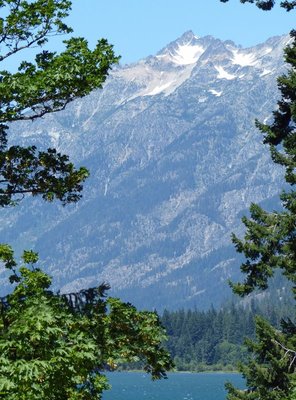 We then went to the small art gallery attached to the Visitor Center before taking a walk along the lake shore. The weather was great - hot sun but a strong wind moderating the temperature a little. 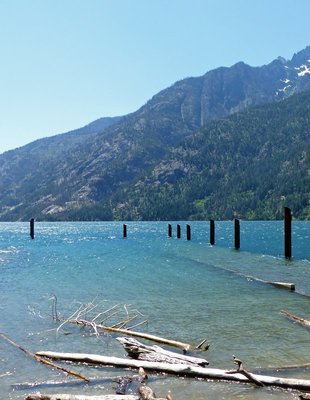 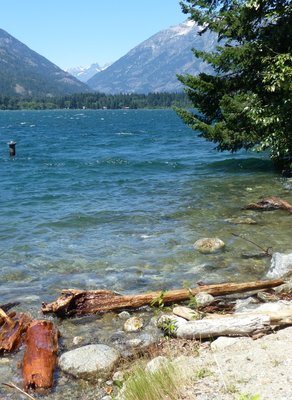 Along the lake shore in Stehekin

Our departure on the Lady of the Lake II was scheduled for 2.00 and we couldn't afford to miss what was the last trip of the day, so we were back at the dock in good time. This is a larger boat than the Lady Express, but it travels slowly and the four hours back to Chelan dragged a little, despite the scenic surroundings. 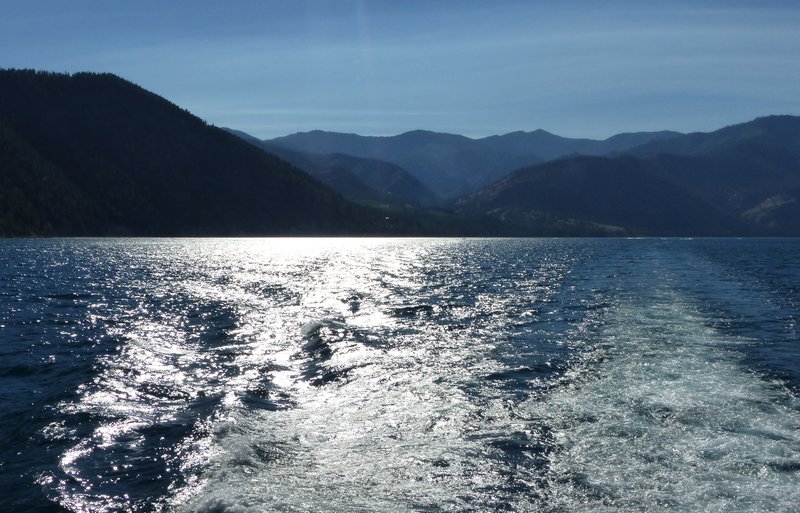 The journey back to Chelan

We were back in Chelan by 6.00 pm and once we had freshened up we went in search of dinner. We had settled on Tin Lilly, out of several restaurants that appealed to us, and it proved a great choice. When we arrived around 7.00 it was full and we were told there could be a one hour wait, so we put our name on the wait list and settled at the bar for a drink. Chris had a Black Butte porter and I tried the House Margarita, which was less sharp than usual as it mixed orange with the lime, but nice nevertheless. And so much for the one hour wait - in less than 15 minutes our name was called and we got a good table inside (there is also seating on a terrace out the back and we had said we'd be happy with either). 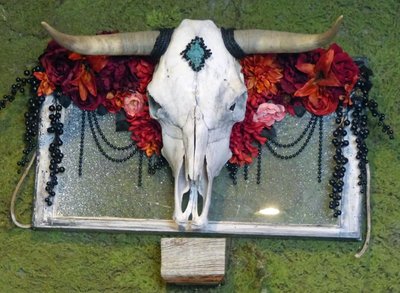 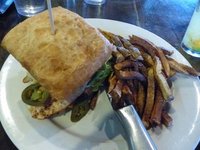 Chris looked no further on the menu than his favourite US sandwich, the Reuben, while I chose a chicken burger with avocado, cheese and jalapeños. Both dishes were great, though I was less keen on the fries which were soft rather than crisp.

With large portions we had no room for dessert but did have a couple more drinks - the porter for both of us this time. Service was friendly and the prices here were really good value, with our bill coming in around $50 for the mains and four drinks.

That sounds like a wonderfully relaxing day after your strenuous walks on previous days. I am so pleased for you that the weather made the experience just so good for you. I love all the extra information you feed us - maybe I should hire you to research my hoped for trip to the northern half of North Island (New Zealand) next year?

Indeed a nice restful daytrip after some rather more hectic days. I loved the views from your picnic spot.

I see your "First View of Mt. Rainier" is now a Featured Photo. Congratulations!

I love your shot above of the moon above the mountains. Beautiful. Very mysterious . . .

Hooray for Chris. The Reuben is my favorite sandwich too. Anything is improved with sauerkraut. Love the stuff.

Yes, we planned this as a bit of a break - mainly for Chris, from the driving. Nice to have someone else do the work for a change!

And thanks for the congrats Sally. I'm not a huge fan of sauerkraut myself but Chris loves it