The journey to San Juan Island

The Buffalo Run Inn provides a complementary continental breakfast, which in practice means helping yourself from a well-stocked fridge in a lounge area shared by all the rooms. We took a croissant each and some juice, but rather than make filter coffee went to the drive-in/walk-in espresso place next door, where we enjoyed good coffee sitting in the early morning sun. 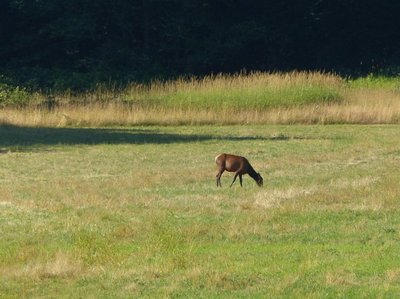 I promise you this is an elk!

Then we were on our way, travelling further west on Hwy 20, towards the coast. We stopped once in a wildlife viewing area called Hurns Field, from where elk can sometimes be seen. In the summer, though, the herd usually makes for higher ground, but we did see one lone female grazing, although rather too far away for decent photos.

An information board explains that the wild elk seen here are part of the North Cascade herd and are Rocky Mountain elk, descended from some transplanted here from eastern Washington State and from Yellowstone Park (the native Roosevelt elk having been hunted out of this part of the state by the late 1800s).

We also stopped when we reached the sea, at Padilla Bay, where the Breazeale Interpretive Center provides access to a deck overlooking the bay. This is considered part of the delta of the Skagit River although its main outlet lies some miles to the south, and is very shallow, flat, and muddy, attracting a large number of sea birds. 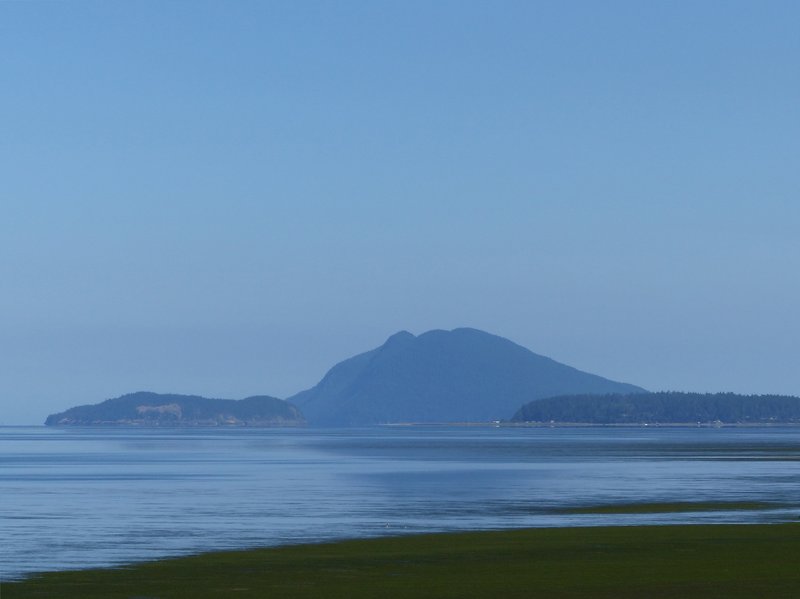 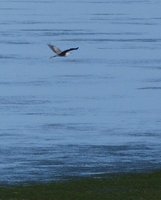 We strolled from the centre’s car park to this deck to take a few photos, but didn’t go down on the rather muddy beach. The centre itself had not yet opened for the day so once back at the car we drove on.

We continued the last few miles into Anacortes, where we got coffee in a rather nice second-hand bookshop on Commercial Avenue, Pelican Bay Books. 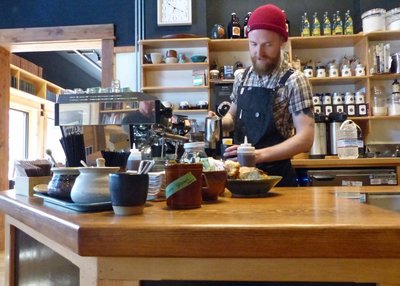 We then took a stroll around this part of town. One feature of Anacortes is the Anacortes Murals Project, created by local artist Bill Mitchell. Over 150 images of local characters past and present adorn the buildings on and around the main street, Commercial Avenue. 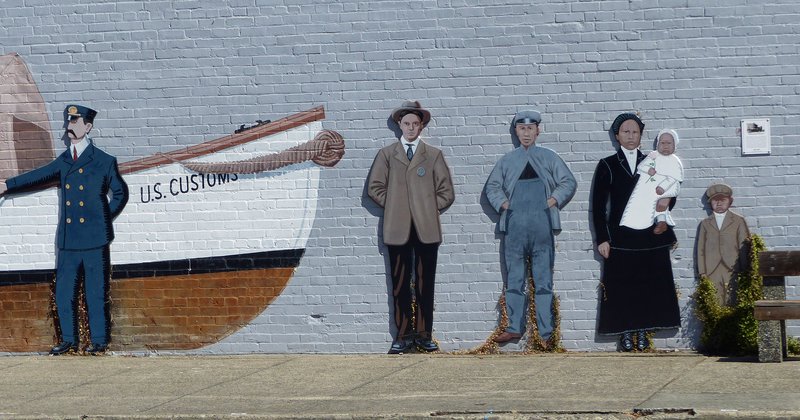 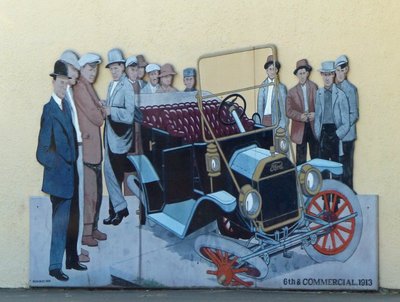 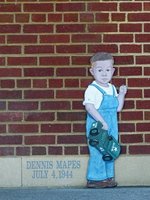 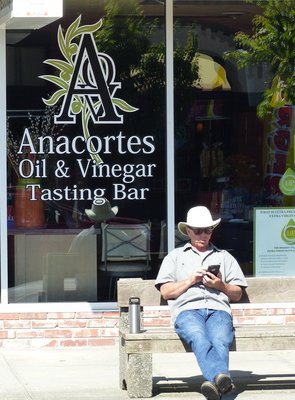 Unusually they are not painted directly on to the buildings but on plywood. Although attached to the buildings they are owned by Mitchell, a step he has taken to ensure they can’t be painted over or destroyed (if a building’s owner no longer wanted to host a mural it could be detached and moved elsewhere).

As well as the locals depicted there is also a sprinkling of famous people (John Wayne and Marilyn Monroe outside the theatre, Andrew Carnegie outside the former library) and a few imaginary ones (such as a mermaid) and even animals (a gorilla who once lived in a zoo here).

What I hadn’t realised at the time and have since discovered is that Bill Mitchell is a quadriplegic, having been paralysed as a teenager in a car accident on Whidbey Island, making his contribution to the recent revival of Anacortes’ downtown area all the more impressive.

After exploring the downtown area on foot, we drove up to the viewpoint in Cap Sainte Park, from where you can see snow-capped Mount Baker inland and the San Juan islands out to sea. There was a bank of fog lying offshore but otherwise the views were very clear.

View towards the San Juans 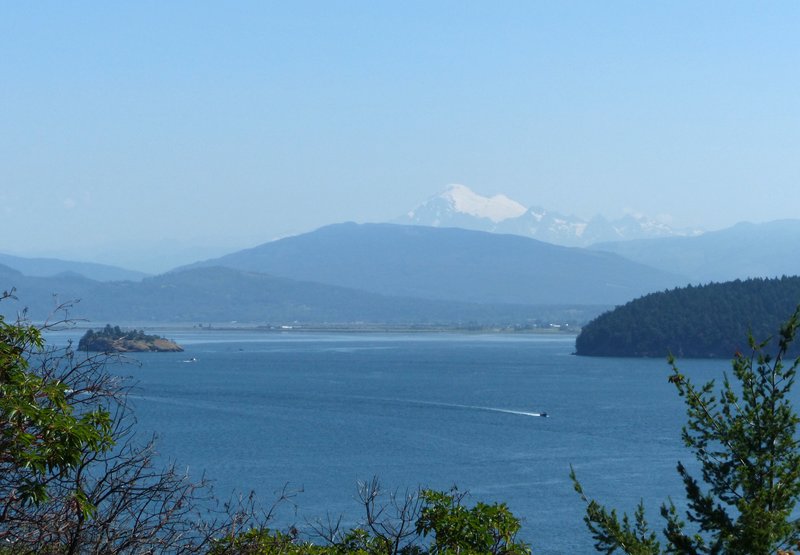 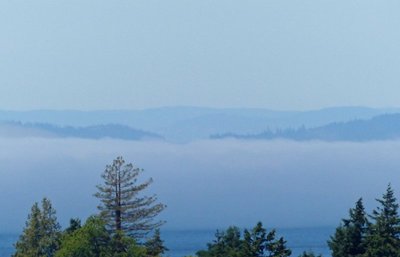 Returning to town we shared a (very large) tuna sandwich in the Gere-a-Deli, which seemed to be something of a local institution and very popular. Despite the crowds though, the service was speedy and the food good. 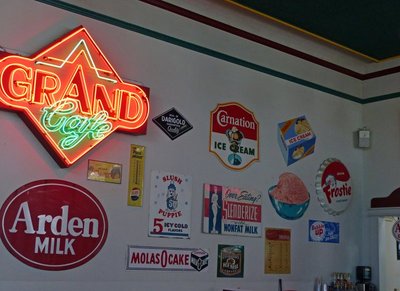 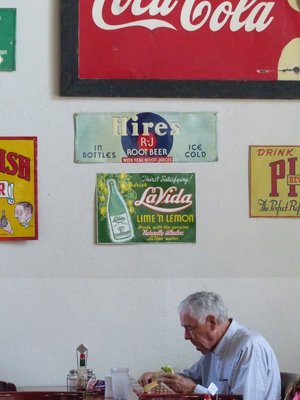 Cormorant at the ferry landing

We then drove the few miles west of town to the ferry terminal for the San Juan islands. We were booked on the 2.00 pm sailing to Friday Harbor, but when we checked in we were told that a ship had broken down and they were running behind schedule, so would put us on the next available one, which proved to be the late-running 1.10 which actually departed at 2.20! 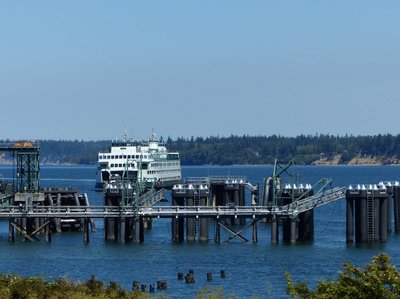 Our ferry approaching, at last!

Once finally on board the crossing went smoothly and the views were lovely - the sea sparkling in the sunlight and lots of marine activity to watch. 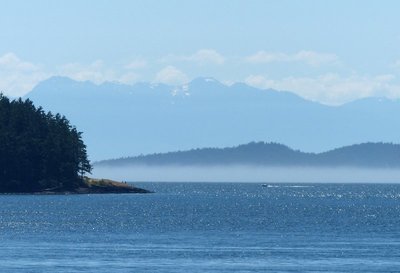 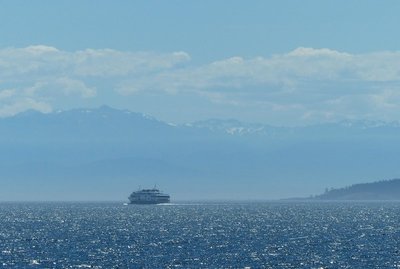 The crossing to San Juan Island 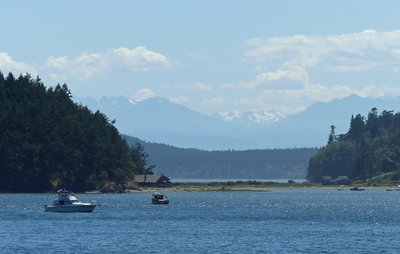 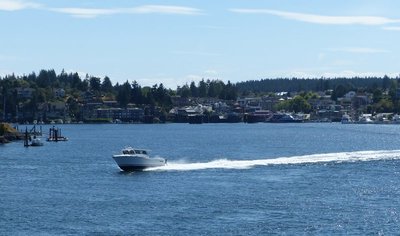 Arriving in Friday Harbor we drove the few blocks to Nichols Street where we had reserved an apartment above the eclectic Funk and Junk shop - one of two Nichols Street Suites. Both shop and accommodation are run by a friendly couple, Mike and Annie Adams, and artwork by the latter decorates the apartments. 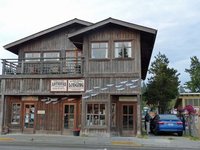 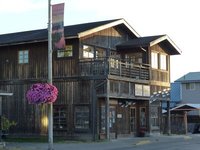 Funk and Junk with apartments above

Although the smaller of the two ours was of a pretty generous size, with two bedrooms, a comfortable sitting area (with limited cooking facilities, which we didn't use) and bathroom. Cosy accommodation for our three nights in Friday Harbor! The only downside was rather unreliable and patchy wifi, but on the whole this was probably our favourite of all the places we stayed on this trip. 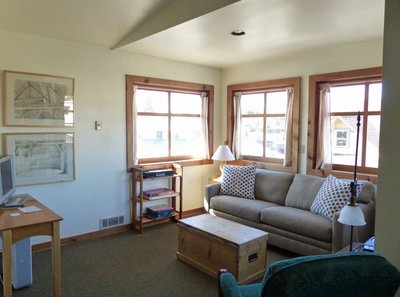 Bedrooms - we used the one on the left 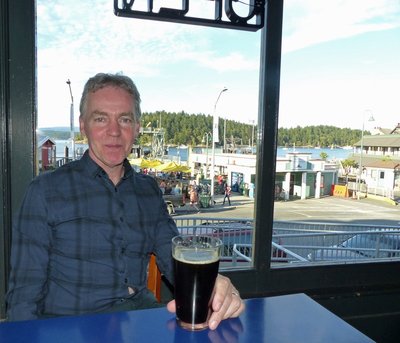 For dinner on this first evening in Friday Harbor we went to Bluewater down near the ferry landing (only a short walk from Nichols Street). We got a window table inside so we could watch all the action as we ate. 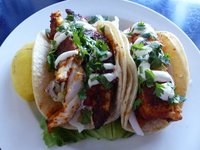 Chris ordered the burger, which he enjoyed, while I went for the fish tacos. These come in two versions - beer battered or blackened cod - and I chose the latter. When the meals arrived however, mine was barely warm. I questioned this with the waitress who was quick to offer and bring a replacement which was much hotter and was delicious. I was glad that I'd spoken up about the original plate and been able to enjoy such a good meal. 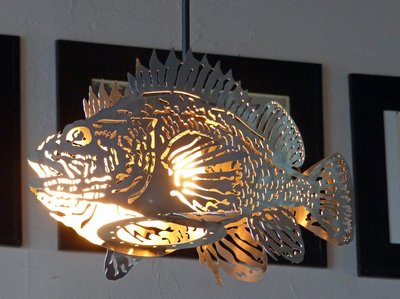 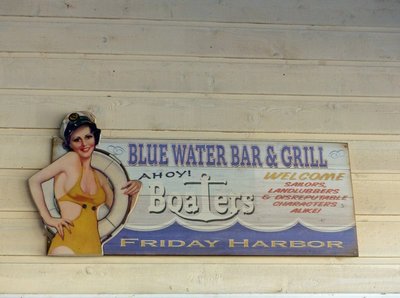 After a short stroll by the water's edge we finished the evening back in our cosy apartment, with a wonderful sunset to round off another great day. 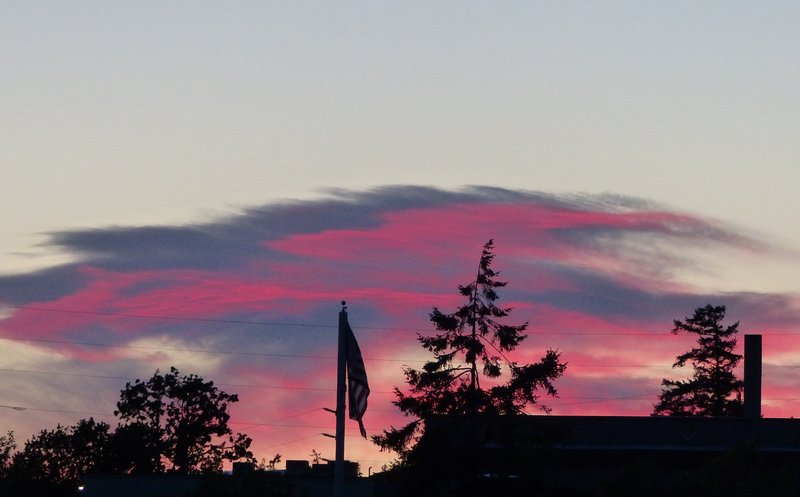 Lovely. What a perfect place for an apartment.

It was! If you do decide on a similar trip I can thoroughly recommend this place - cosy, good location, reasonable price for what you get, helpful owners ...

Another superbly illustrated and interesting piece of travel writing.

Thanks so much Adam - you are too kind!

A lovely contrast to the mountains.

Thanks for stopping by Albert. You're right, the islands did make a good contrast