Back to the mainland 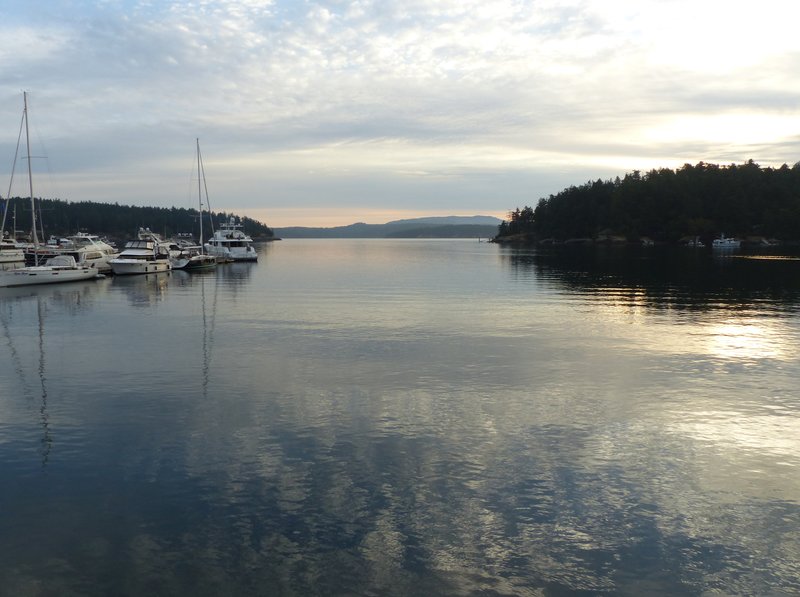 Time to leave Friday Harbor and the San Juans. With one ferry still out of service and an emergency schedule in operation, our reservation for a lunchtime boat was considered valid for any boat on the same day, so we decided to leave earlier than originally planned and spend some time on Fidalgo Island.

After getting up early and checking out of our Nichols Street apartment we parked the car as directed in one of the ferry queue lanes and were free for an hour to get some breakfast. We went to the Cheesecake Bakery again, as its waterfront setting was convenient and we liked the relaxed vibe, good harbour views and fast wifi. I had the Veggie Scramble, which came with good potatoes and a cup of delicious fresh fruit. Chris had the ham and Swiss breakfast sandwich which was also good.

We returned to the car in time to board the ferry at 7.45 and it left on time at 8.05 - none of the delays of our outward journey (when admittedly the breakdown had only just happened and the schedules had not been adjusted to compensate). The morning was fairly dull so we sat inside and I didn't take any photos.

Arriving in Anacortes we had planned to drive up Mount Eerie in the centre of Fidalgo Island to check out the views, but the road was closed for construction work and although we might have found a way round, it didn't seem worth it given the dull weather. So we headed straight for Deception Pass instead.

This is a narrow channel which separates Whidbey Island from Fidalgo Island, crossed by an iron bridge. The state park in the southern side is the most visited in Washington State - I imagine because of its relative proximity to Seattle, large size and well-developed facilities. But we had other plans before visiting the park. 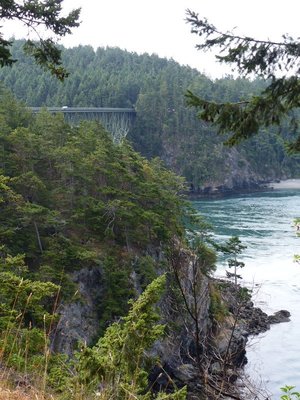 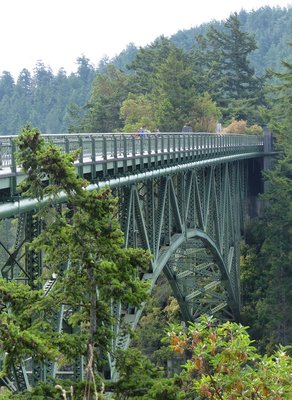 First views of Deception Pass and its bridge

A private company has the concession to run boat tours through the Pass from nearby Cornet Bay. So we stopped at their ticket office just before the bridge to make enquiries and learned we could get on the 11.00 departure. We bought our tickets, drove over the bridge (stopping in a pull-out first for a few photos) and headed for Cornet Bay. As we parked we spotted some deer on the other side of the road - a mother and two fawns. A good start to our wildlife viewing here!

Cornet Bay is part of the State Park, but we had bought a Discovery Pass in Port Townsend at the start of the trip so didn't need to pay again here (the pass is per vehicle, lasts a year and entitles you to visit any state park in Washington free of charge - the normal day fee is $10). While waiting to board the boat we wandered round to take a few photos. This is very much a boating / fishing community and I watched some men sort through their catch of crabs. 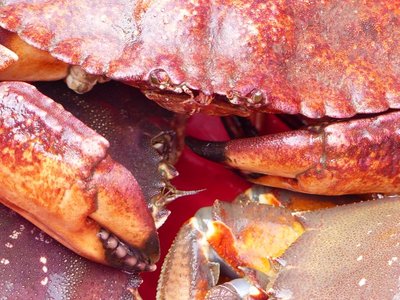 Some of the boats were in less seaworthy condition than the others! 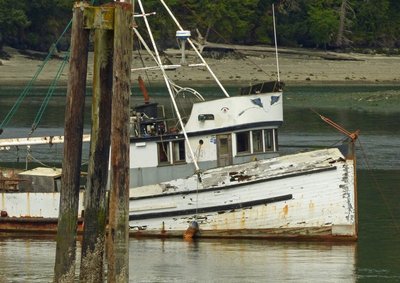 The tour boat is a jet boat and seats around 40 people I reckon, but there were only about ten of us and therefore plenty of room for all to get a good seat. The trip lasts about 50 minutes and isn't cheap (we paid $39 per person) but we enjoyed it and had a few great sightings.

The first was probably the best - soon after leaving the jetty the pilot slowed the boat to point out a pair of bald eagles on a dead tree in the water. One of them was tucking into an eel and the boat stayed long enough for us to get quite a few photos, before he tired of having an audience while enjoying his meal and flew off to eat somewhere more private among the trees on shore. 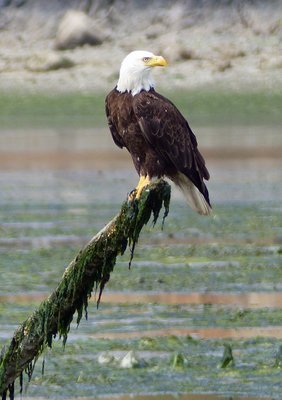 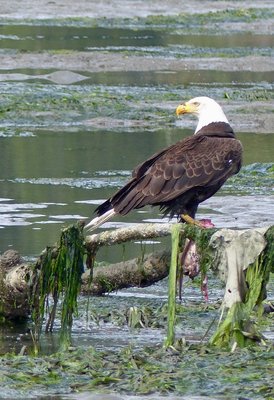 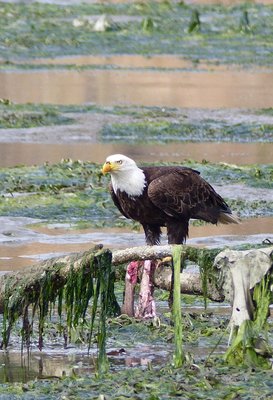 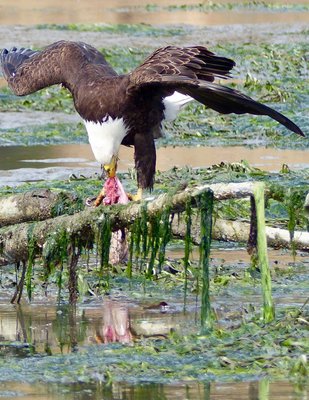 We headed out towards the bridge, which towered above us. Technically this is two bridges, which share a name – the one to the south spans Deception Pass itself, while the one to the north crosses the narrower Canoe Pass. Between the two channels is a rocky islet, Pass Island, and it was this that led to the bridge being built in this spot as it allowed the engineers to span two smaller channels rather than a single much larger one. The bridge was built between 1934 and 1935, as part of the New Deal construction programme. 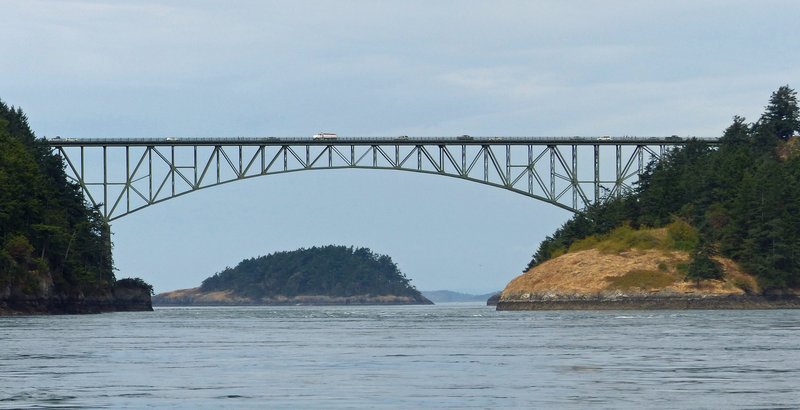 
The tide was low and we saw a very purple starfish on the cliffs at one point, as well as barnacles, some clams and other sea creatures. We also passed a few harbour seals swimming near one of the small islands in the channel. 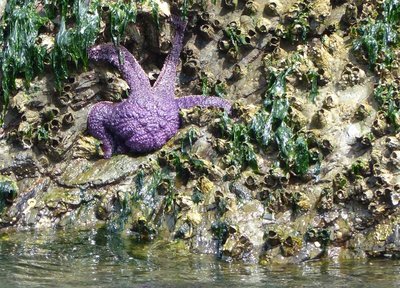 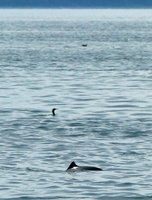 When we got out to more open waters we were excited to see harbour porpoises. These are among the smallest of marine mammals and it was good to get a slightly closer look at some after seeing one in the far distance while out whale-watching with Captain Ken a few days ago.

On the way back to the marina our guide pointed out the rock formation on Rosario Head known locally as King Kong point, for obvious reasons. 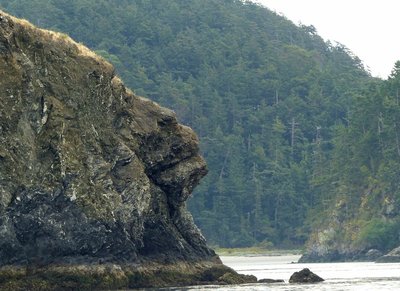 We also saw another bald eagle, this time in the trees on shore, and an eagles' nest. 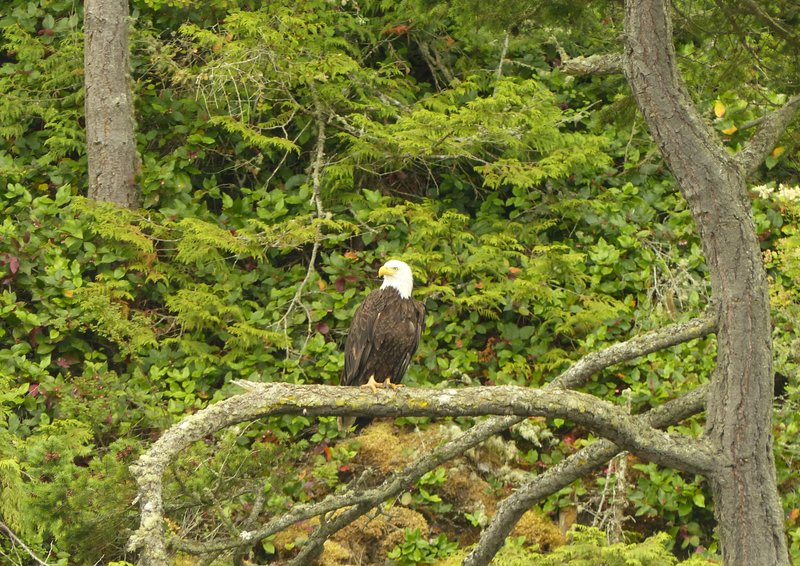 There is a military base just to the south of here (Naval Air Station Whidbey Island) and several jets flew overhead while we were on the trip. The guide explain that these were surveillance aircraft. Later we were to see, and hear, many more while visiting the state park. I don't know if they fly every day or if we caught them when practicing manoeuvres, but the noise did get rather irritating after a while!

After our boat trip we stopped off at the nearby General Store to buy cold drinks and a snack, then drove into the park. This is a large park and with no idea which part would be best to visit we took a guess and followed signs to the West Beach. This proved to be a driftwood-lined stretch of sand with views of distant islands. While pleasant enough, we had been spoiled by the atmospheric beaches of the Olympic Peninsula, so only took a short walk and a few photos here. But it was a good spot to enjoy our drinks, although the noise of the fighter jets was starting to get irritating at this point. 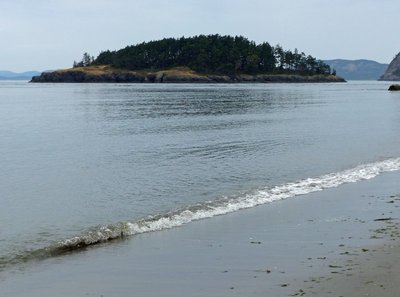 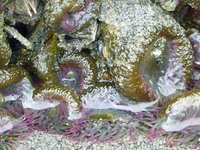 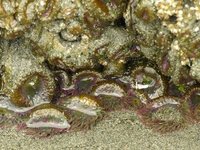 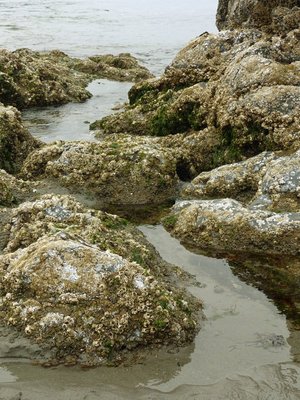 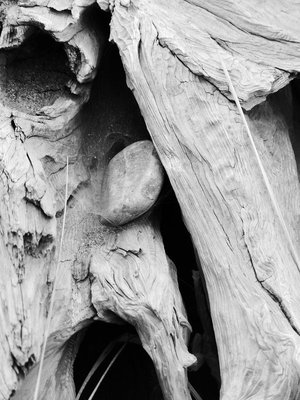 With the weather still dull and a few spots of rain in the air we decided to move on. Our base for the night was to be La Conner, a short drive away on the mainland, and I'd read good things about the museum of art there, so off we went, stopping briefly on our way to get a closer look at the bridge (there are parking areas at both north and south ends, from where you can walk out onto the bridge or down below it). 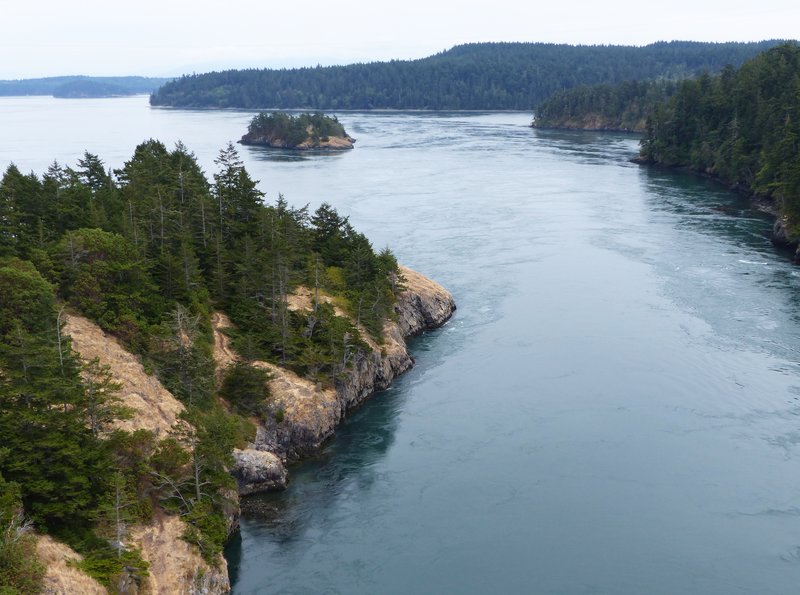 View from the bridge

La Conner when we reached it was perhaps a bit twee, full of gift shops and restaurants and not much else, and parking was a challenge. But we found a space and headed for the museum, the Museum of Northwest Art or MoNA. This has changing exhibitions featuring contemporary artists from the region, and is free to visit (though of course donations are welcomed).

There were three artists exhibiting when we visited. The first was an emerging one who had won a show at the gallery, Whiting Tennis. I have to say that his work was not really to my taste. But I did like both of the others. Kelly O'Dell works in glass and other media and is inspired by her passion for the environment and concerns about the preservation of threatened species. I loved her ammonites in particular. 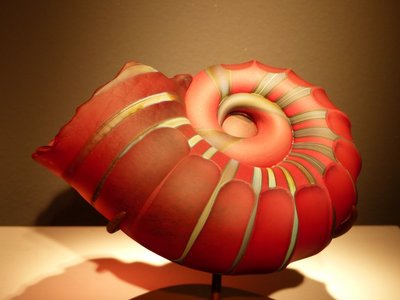 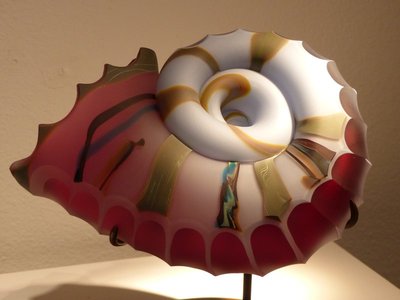 Another work by Kelly O'Dell

The upstairs gallery was devoted to the work of a local artist, Clayton James, who had died last year. I enjoyed not just seeing the pieces but also reading about his life and that of his artist wife, a former director of the museum. His sculptures appealed to me more than his paintings but it was all interesting. 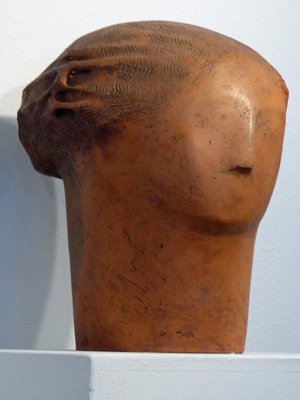 After visiting the museum we got an ice cream at one of several cafés on First Street and browsed a few of the many gift shops and galleries. 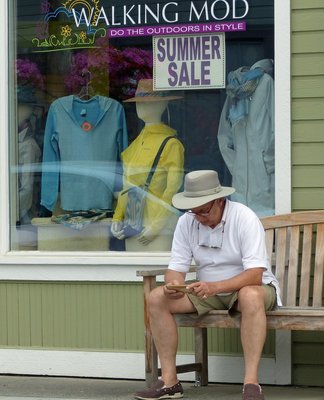 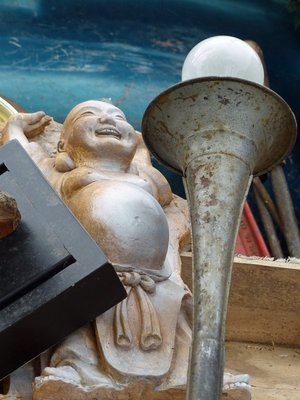 By now it was time to check into our hotel at the southern end of that street, the Planter Hotel. This is on the first floor above a gallery, Earthworks, and has an old fashioned style. Our room wasn't large but was fine for one night. The location was great, the wifi worked well, everything was clean and nicely decorated - a good choice. 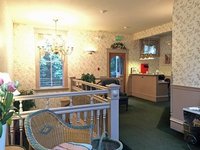 In the evening we ate at the Seafood and Prime Rib restaurant just across the street from the hotel. We shared some excellent crab cakes, then I had the halibut in a macadamia nut crust and Chris a Caesar salad with grilled chicken. I was a little disappointed with my mashed potato, which was supposed to be made with caramelised onions but tasted quite bland, but otherwise everything was very good. I drank a couple of glasses of Walla Walla Pinot Grigio and Chris had a local lager. The service was friendly and we enjoyed our evening here a lot. 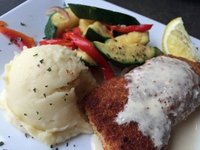 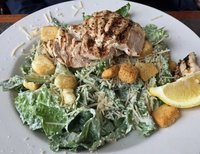 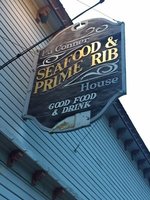 Dinner at the Seafood and Prime Rib restaurant

Enjoyed reading this Sarah. Never been to this part of the world and I've definitely never seen a purple starfish before

Still a beautiful region, even on a dull day.

The purple starfish was a new one for me too Malcolm - an amazing colour!

We have purple starfish in California too. Love them, especially when they are with the orange ones, very colorful. I loved your bald eagle pictures. They are so dramatic, particularly the one with his wings raised.

Another fantastic piece Sarah. You certainly managed to transport me over there with your words and pictures. I used to live in California but have never seen a purple starfish - must try to get a trip back one day.

Thank you Sally and Yvonne. The purple starfish really amazed me - so vivid!

And Sally, that is my favourite eagle photo too. I was really pleased how well these came out, given that they were taken from the boat especially which, though the pilot had stopped, was continually moving a little

Thanks Ann - it looks great from this angle but like many such things is just a lump of rock if you don't look from exactly the right place!

I am sure it was wonderful to see the bald eagles... would certainly be a highlight for me.

Thanks Albert - definitely my highlight of this particular day ?