The last full day of the trip! We had slept well in our cosy Planter Hotel room in La Conner and had a good breakfast in the Calico Cupboard Bakery opposite (very good cappuccinos and nice muffins). Now it was time to drive back to Seattle, turn in the hire car and get our act together for the return flight tomorrow. 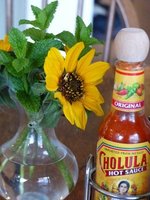 But there was one stop we wanted to make on our way to Seattle, so instead of taking the most direct route on IS 5, we turned off that road to take IS 405 which runs to the east of the city. In Renton we took a side road to the Greenwood Memorial Park, to pay our respects to (arguably) Seattle's most famous son, Jimi Hendrix. For my younger readers who may not know Hendrix (are there any?!) he was born here in 1942 and is regarded as one of the most influential electric guitarists in the history of rock. His style of playing and his songs shaped the music of the late sixties, using the electric guitar in ways not previously dreamed of.

When he died in London in 1970 his father had his body shipped home and buried here in Renton. Fans started to visit, eventually coming in their thousands, and in 2003 his father bought a larger plot in the memorial park, had Jimi moved here and a memorial erected. Despite its relative grandness the monument is unsignposted so you need to know it's there, but of course many do and continue to visit. 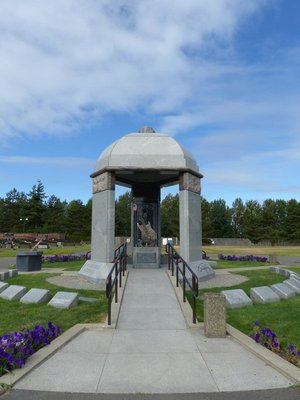 The monument consists of a statue under a granite dome, with images and quotations from his songs. Fans leave plectrums and flowers, and plant lipstick kisses on the images. 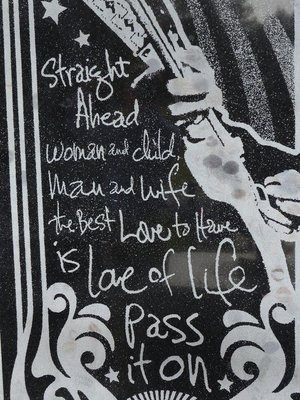 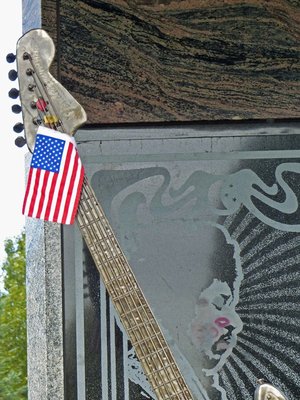 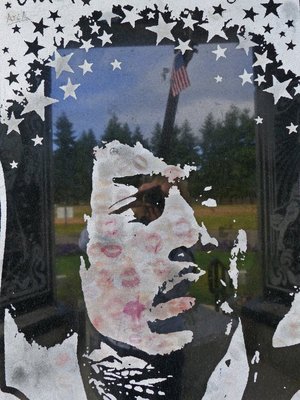 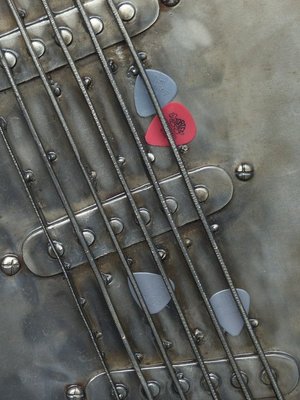 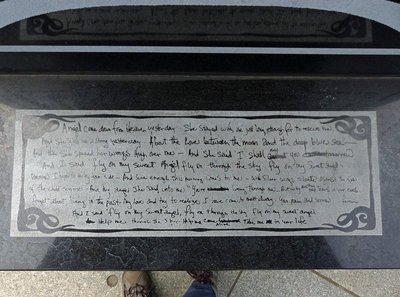 Retracing our steps north a little on IS 405 we turned off on IS 90 to drive into the city. The road was busy even though it was a Saturday, so Chris had to be alert with the driving and I with the navigating - quite a change from the mostly rural roads we had been on for the past two and a half weeks.

Our destination was the Capitol Hill district and another memorial to Jimi, the statue of him on Broadway. This is smaller - we actually drove past it without seeing it the first time and had to ask for directions. It's worth a stop if you're in the area but the memorial in Renton is the more impressive of the two and a fitting tribute to the iconic rock legend. 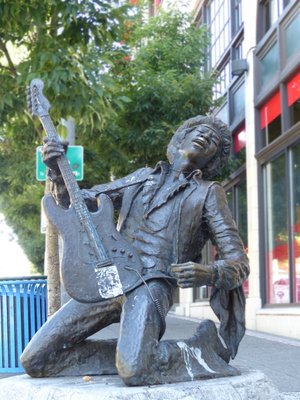 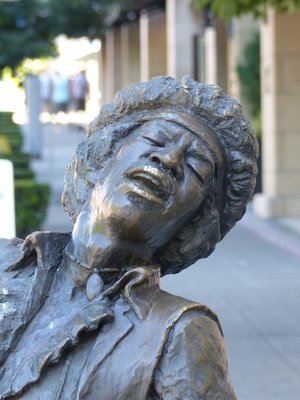 Statue of Hendrix on Broadway

Goodbye to our car and hello (again) to Seattle

From here we drove downtown, stopping off to fill the car with petrol (OK, gas!) as we had been asked to do, before dropping it off at the Enterprise office. Our hotel, the Motif, was walking distance from here, though with the sun out and temperatures rising it was a warm walk! We were pleased to find on arrival that although it was still several hours ahead of check-in time, we could already have our room. And it was a great room - the largest and most comfortable of the trip. This isn't a cheap hotel but I'd found a good deal on Booking.com and we'd decided to treat ourselves for our final night. So we had two queen beds, loads of space, very nice modern décor and all the facilities we needed - excellent wifi, coffee-making, bottled water, robes etc. etc. These things come at a price however, as there is a 'facilities charge' added to the cost of the room to cover all of the above! 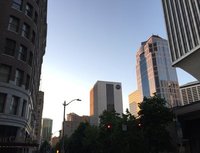 Motif Hotel and our room

But we didn't linger in our rather nice hotel room. Leaving our bags there we walked over to Westlake Station and got the light transit train down to Pioneer Square. We had thought about doing the famous tour of Seattle's historic underground but learning that eight flights of steps were involved I decided not to risk my knee. Instead we had a good light lunch at Caffe Umbria in Occidental Square (sharing a baguette and some olives, plus refreshing grapefruit granita drinks) and then spent a couple of hours exploring the district, which is great for the street photography both Chris and I enjoy. 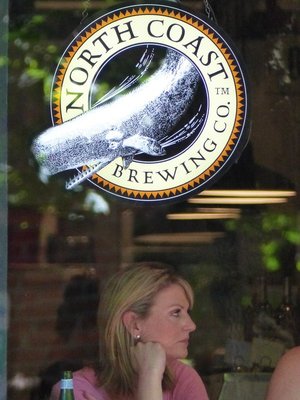 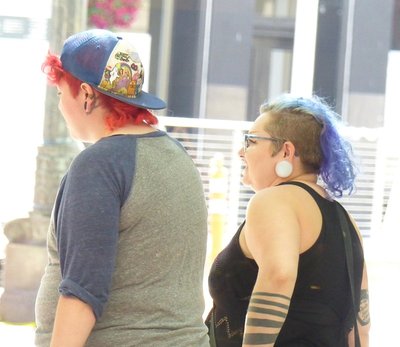 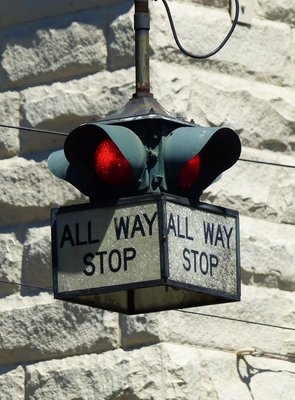 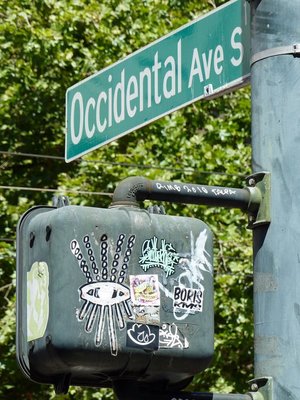 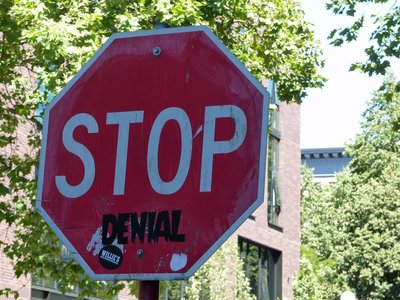 This is the oldest part of the city, having been settled in 1852, and many early buildings have been preserved here, most of them built in the late 19th century after fire destroyed much of the city centre with its largely wooden structures. At the same time the city's streets were raised several metres to combat problems of sanitation and flooding, hence the popularity of those underground tours which visit the earlier remains below the modern-day street level. But there is plenty to see above ground too. 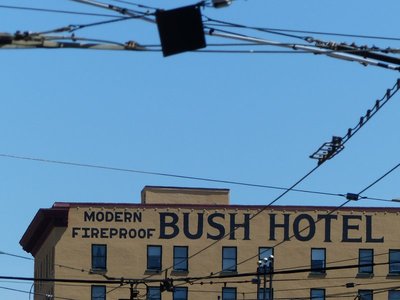 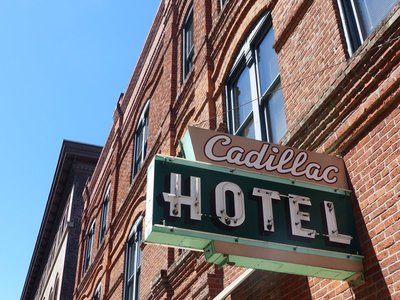 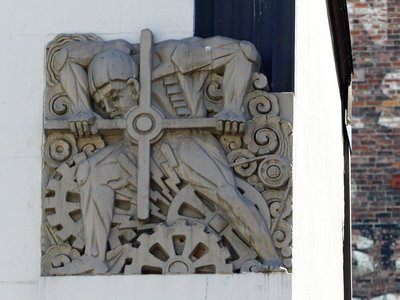 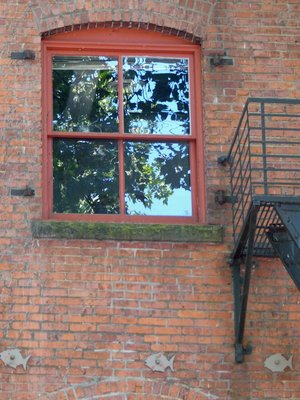 As well as the interesting architecture this area also boasts some great street art and graffiti. 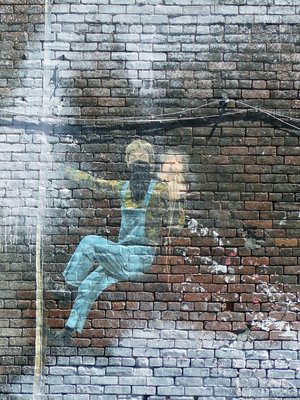 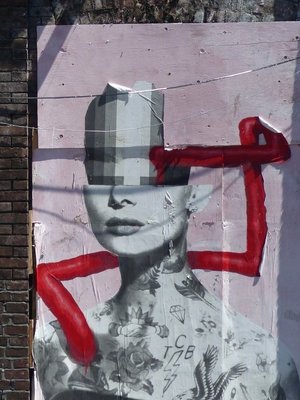 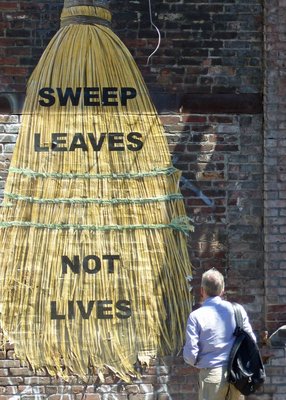 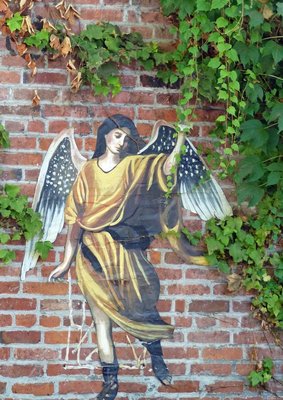 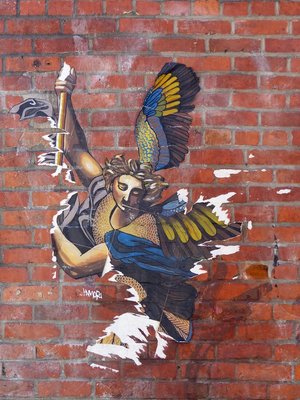 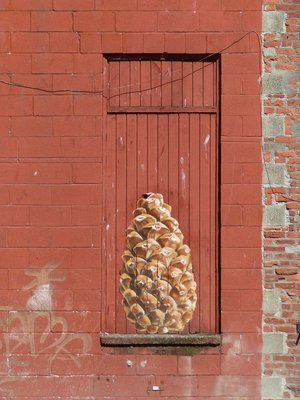 We paid our respects again to Chief Seattle, whose bust stands in Pioneer Square itself, and visited the rather surprising Waterfall Garden Park near Occidental Square, where a very realistic-looking artificial waterfall rivals in its power some of those we had seen in the national parks earlier in the trip! 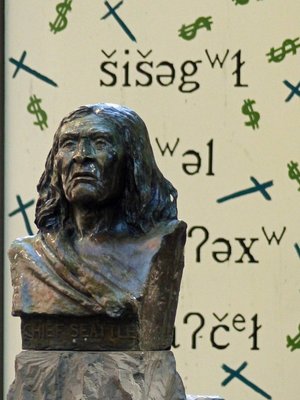 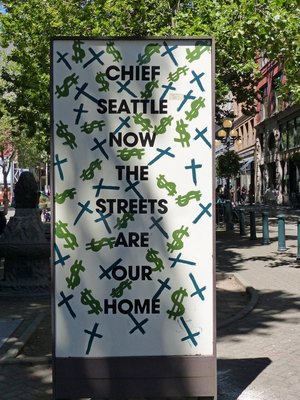 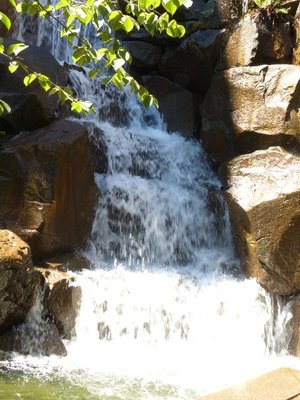 In the Waterfall Garden Park

We also went in a fantastic gallery, Stonington, which features the work of indigenous and non-indigenous Northwest artists. There were many wonderful pieces - masks, sculptures, paintings. All though were rather on the large side for our small home - much to Chris's relief!

We returned to the Caffe Umbria for ice cream, or rather gelato as this is the proper Italian stuff. I loved the two flavours I picked - a great pistachio and even better chocolate stout (unusual but very successful). After a few more photos we decided to call it a day and go back to the hotel to sort our bags, relax and refresh before our last evening out of the trip. 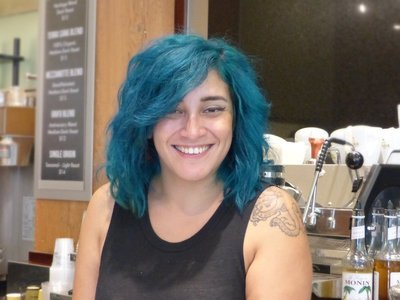 Our server at the Caffe Umbria (her mum does her hair!)

Back where it all began 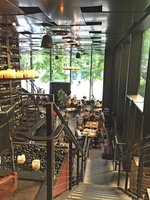 View from the mezzanine in the Purple Café

We decided to have dinner again at the Purple Café, which we felt we had been too tired to properly appreciate on our first night in the city. This time we were seated at the upstairs bar (we were lucky to get in, as it was a busy Saturday evening). We shared a fabulous starter of burata with croutons, apricots, almonds and a delicious dressing. My crab roll main course was nice, without being quite on a par with the starter, while Chris really liked his lamb burger. This isn’t a cheap place (my wine, a delicious local Semillon, was quite pricey but excellent) but worth it for the quality food, drink and great atmosphere. And also a fitting place in which to reflect on the trip, as we had started it here, and drink a toast to Hendrix and his ‘Purple Haze’.

I never knew Jimi Hendrix was from Seattle.

It's over. I am so sorry it's over. Must admit we'll find another last day. Jimi Hendrix has never been on my must-do list. Honestly, until I read this, I thought he was a female. That and I thought he was buried in Père Lachaise Cemetery in Paris. Just discovered that is Jim Morrison. Thank you Google . . .

Obviously, I'm not up on rock and roll. The rest of the trip has been fantastic and we will try to replicate it minus the beginning and ending plane trips.

Chris is the big Hendrix fan but I do recognise the significance of his contribution to rock music and in any case the memorial was interesting to see, although wouldn't be worth the detour if you're not a fan.

And Ruth, many thanks for commenting too - clearly your block does not affect all interaction on the site. Hopefully we can get that sorted soon for you

Oops, Don too - many thanks

Lovely sreet art pics again Sarah. The lipstick kisses on Hendrix's memorial reminded me of the same and other adornement on Oscar Wilde's tombstone in Pere Lachaise Cemetery in Paris. From your photos it seems that a similar (though on a lesser scale) perspex solution has been implemented here too.

Hmm, Albert, now you have me racking my brain to recall if there WAS perspex here, as I certainly didn't register it at the time!

Actually looking at it again I think I am wrong - and it may just be a shadow (pic 3 of your group of 5).