I’ve been through the desert ….

To the Atacama Desert

Sunset in the Atacama Desert

After spending a few days in and around Santiago we flew north to explore the Atacama Desert. This is truly a land of extremes:

~ The driest non-polar desert in the world

~The oldest desert on earth

~No significant rainfall for 400 years, and some areas that have NEVER had any rainfall

In the Atacama Desert everything is in superlatives. Its soil in places has been likened to that of Mars and it has stood in for the Red Planet in film and on TV, and in NASA instrument tests.

Yet the diversity of the scenery here is what struck me most – yes, we saw arid salt flats and barren plains, but also snow-capped mountains, deep blue lagoons, wetlands and even a small forested area. Here are all a landscape photographer’s dreams come true! 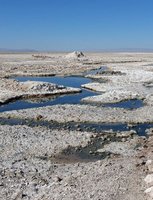 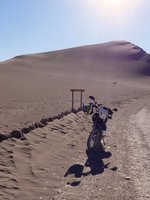 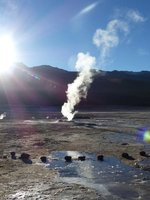 I have wanted to visit the Atacama Desert ever since reading ‘Between Extremes’ by Brian Keenan and John McCarthy. Their descriptions of the desert, and especially of the geysers at El Tatio, captivated me. Fortunately, it more than lived up to my expectations.

I was captivated not only by those geysers but also the barren salt flats, their shallow waters providing picture-perfect reflections of feeding flamingos; the ever-changing colours on the sides of the mountains and over the plains; the dramatic rock formations glowing in the sunset; the shy vicuña and other animals managing to survive and thrive in this harsh but beautiful place.

Like most visitors to the Atacama we based ourselves in San Pedro de Atacama and explored from there. And because our time was limited, we took tours to do so, and managed to see a surprising amount in just a couple of days, although not all that I would have liked to have seen. While tours may not be for everyone, we were impressed with the three we took (two private and the other a shared tour to the El Tatio Geysers) and felt it was a good way of seeing a lot in a short space of time.

But first, we have to get to the desert … 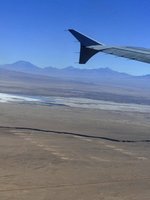 Our journey to San Pedro de Atacama was in two stages. Firstly, we flew from Santiago to Calama with Latam, a flight of just over two hours. Latam is a Chile-based airline that was formed by the merger of Chile’s LAN and Brazil’s TAM in 2010, and some of their planes are still branded as LAN. We took all our internal flights with them during our trip to Chile and were impressed with their levels of service, punctuality and standard of the planes throughout – definitely to be recommended.

A complimentary light snack and soft drinks were served on board (as was the case with all our internal flights). There were fantastic views of the Andes en route – to get the best of these try to secure a seat on the right-hand side of the aircraft (seats L, K or J). We were unfortunately not able to do this on the outward flight, but made up for it on the return (when of course the left-hand side is the place to be!)

From Calama we had a shared transfer with Transvip, who seemed to have something of a monopoly on this route. The drive took about one hour twenty minutes and was through wonderful desert scenery, especially on the final miles approaching San Pedro when the road passes through the spectacular scenery around the Valle de Muerte (the Valley of Death).

Because this was a shared service, when we arrived in the town we had naturally to go to various hotels to drop off passengers, but as it was a small vehicle this wasn’t a major issue. We only visited two other hotels before heading out of town to our own which lay at a short distance from the centre, and in fact, it was quite good to get a sense of the town before doing so.

Our base in San Pedro was the Altiplanico Hotel. We chose this hotel as it seemed to be a good mid-priced option in a town where both high-end and budget accommodations abound, and it more than lived up to our expectations.

The property consists of a main building with lobby and restaurant and 29 bungalow rooms set in three semi-circles. All are en suite and have a small terrace area with seating, but they vary a lot in design and layout (judging by the photos on the website).

Ours was #204, a superior double, with a king size bed, plenty of space and good storage with an in-room safe. Our terrace had views of the garden and the bungalows in the first section (this photo was taken from our terrace). We had a large bathroom and a separate outdoor shower – these are only in the superior rooms I believe, and I loved it!. Despite many reviews to the contrary on Trip Advisor and elsewhere, we did have wifi in our room as well as in the public areas, although it was rather weak and unreliable (the lobby wifi is better).

A buffet breakfast is included in the room rate and I thought it a good selection – fresh fruit (pineapple and melon), juice (pineapple and mango), cereals, breads, cheese and meat, scrambled eggs and sausages, and a variety of sweet items. The coffee though left quite a lot to be desired as it was both weak and odd-tasting. On the mornings when we had early departures (before 7.00) packed breakfasts were left for us at the bar and coffee and tea were available. The restaurant also serves lunch and dinner but we didn’t eat any other meals here (the dinner menu looked very limited, by the way). Between lobby and restaurant there is a cosy bar area, and a small room off this has computers for guests to use.

There is a small swimming pool with lots of seating around it in both sun and shade. Although there is a small service counter next to it, this didn’t seem to be staffed at the time of our stay (October 2016) and I had to go to the lobby to ask for a pool towel. The water was chilly (unsurprising as the temperature drops steeply at night in the desert at this altitude) but refreshing, although the pool could have been a little cleaner – there were quite a lot of dead leaves and a few dead insects floating on the surface.

Apart from the lack of pool service staff were friendly and helpful, for instance printing out boarding passes for us ready for our departing flight. I’ve seen a few comments about unfriendly staff but this certainly wasn’t our experience. I’ve also seen some complaints about barking dogs at night, but while we heard these they never troubled my sleep – and I’m a light sleeper. There was more noise from the resident peacocks however, who do have a tendency to screech rather loudly, but they are so beautiful I felt the very occasional disturbance a price worth paying

From the hotel it is about 10 minutes’ walk to the edge of town and 15 to the centre. We didn’t find this a problem (I’ve seen a few reviewers comment negatively) but you need to be prepared for this if you want to eat out in the town as we did. The road is a rough track and unlit for one stretch, so pack a torch (flashlight) for your return walk.

The Atacama Desert is a high one. In San Pedro de Atacama you are at 2,407 metres above sea level, and some other parts are considerably higher (the El Tatio geysers, for instance, are at 4,320 metres). You are highly unlikely to suffer any ill effects in San Pedro, as 2,400 metres is generally considered the lowest point at which altitude sickness can strike, but you may notice the altitude in other ways – I was taken by surprise when a lotion shot out of its tube when I first opened it after arriving here, affected I think by the change in air pressure. You will also notice the dryness of the atmosphere; I suffered a bit with dry, itchy eyes and Chris was sneezing quite a lot!

If doing any tours, and especially if going to the geysers, you do need to be aware of the possible symptoms of altitude sickness. These include headaches, nausea and dizziness, and if you feel any of these you should alert your guide if on a tour, or descend to a lower altitude if you have come independently. Even if you don’t have any symptoms, be prepared to feel some fatigue so take it easy here – no rushing around! 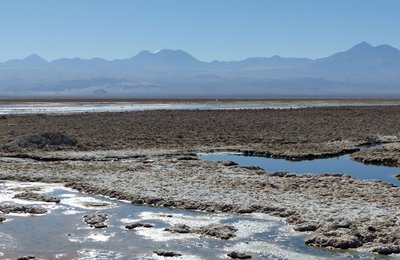 At the Salar de Atacama

An evening in town

On our first evening in San Pedro we walked into town and decided to eat at Adobe. This is a popular mid-priced restaurant option in San Pedro, and rightly so from our experience. Seating is in a partly open courtyard with a fire at the centre which is lit when it gets dark, creating a cosy and informal atmosphere (if a little smoky). We found service to be both friendly and efficient, and while the staff don't speak much English, there is an English menu so this isn't really a problem.

We arrived quite early in the evening so decided to start by just ordering drinks which wasn’t a problem. I enjoyed an excellent herby pisco sour as my aperitif while Chris had a bottle of beer. Our smiling waitress brought sopapillas and salsa dip for us to enjoy with these, while we got on with the serious business of ordering.

We decided to share the squid starter, which was good although not very generous – just five rings (Chris kindly gave me the extra one as it was my birthday!). I followed this with a very good chicken dish served with rosemary potatoes and Chris had pizza which he enjoyed. He drank a second beer with this and I had a glass of wine in addition to the pisco sour. Our bill came to 46,000 pesos with the tip, which is about average for pricey San Pedro.

We liked Adobe so much we returned a couple of nights later. Chris again had a pizza (as a pizza fanatic he was full of praise for the pizza chef here) and I had an excellent salmon dish with a really flavoursome sauce, potato and salmon roe. Judging by the quality of the food on our two visits, Adobe deserves its good reputation among visitors to San Pedro. 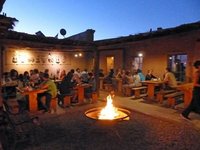 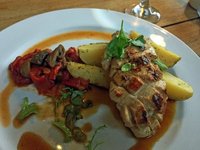 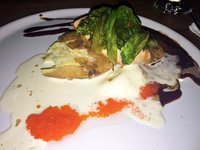 We spent the next couple of days exploring as much of the Atacama as we could pack into our limited time - explorations which I will describe in my following entries.

Wow this is bringing back some great memories from my trip here .. about 25 years ago .. I did laugh at a reference to 'both high-end and budget accommodations" abounding .. 25 yrs ago there was hardly anything here but from your photos the wonderful desert hasn't changed at all so really looking forward to your next entries (one I see waiting for me!)

I can imagine that it must have changed enormously!

Truly magnificent photos, Sarah :-) I love the one of El Tatio Geysers with the sun. Your hotel looks beautiful, just my kind of room. And the restaurant sounds delicious. (and thanks for the information about the merge of LAN and TAM. This was well after my South America trips, so I didn't know)

Thank you Ingrid :-) We loved it here as you can already see from this first blog I think