Mainz to Trier to London 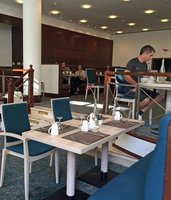 Breakfast room at the Hilton

This morning was all about taking it easy after the long day yesterday and 'excitement' of the match. We slept well and decided to treat ourselves to the hotel's buffet breakfast. Although not included in our room rate and quite expensive at (we thought) €15 per person, it would give us the leisurely start to the day we wanted. So we enjoyed fresh orange juice, good coffee, muesli, fruit salad and some nice bread and cheese in the pleasant restaurant with a lovely breeze coming in through the open door nearby (it was clearly going to be another hot day). We don't eat huge breakfasts and accepted that what we did eat was probably not worth €15 but were OK with that. We got a shock though when the bill came for us to sign - it seemed that €15 would have been the price had we opted for breakfast at check-in but walking in unreserved it had cost us a whopping €25 each! Oh well, you live and learn - but a pricey mistake.

As I have mentioned elsewhere in this blog, Chris likes when possible to get to Sunday mass when we travel, so we went to the 10.00 service in the cathedral, which also gave us another chance to look at the interior. On the way we bumped into our friend Barry who was having breakfast at the Extrablatt in the Schillerplatz - which of course is exactly what we should have done, especially on such a lovely morning! A dog was enjoying the wonderful fountain there, the Fastbrunnen. 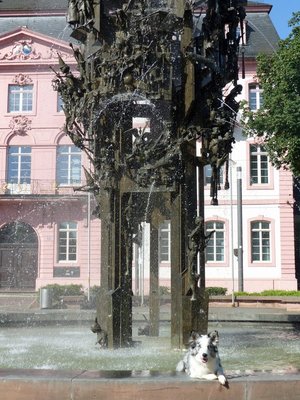 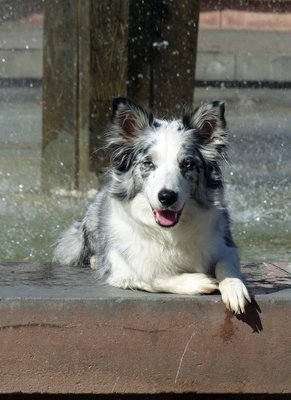 Afterwards we took a few photos in the large Marktplatz: 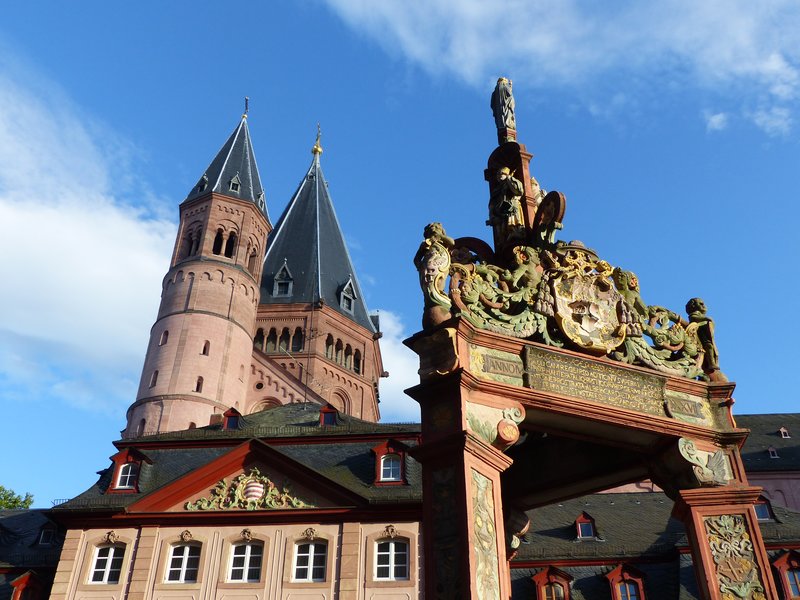 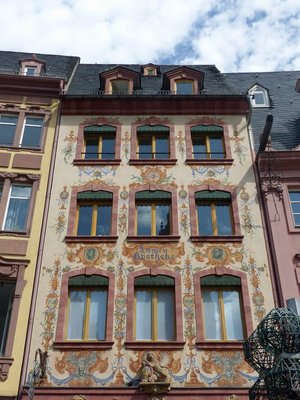 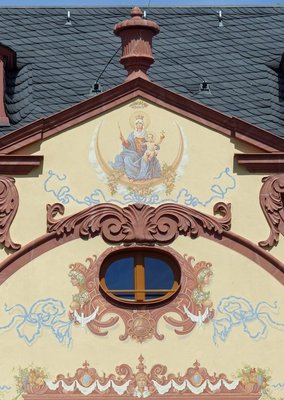 Old buildings in the Marktplatz 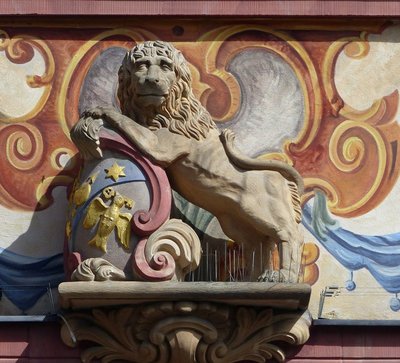 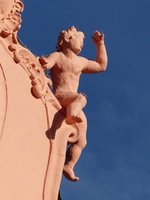 We then strolled back to the Extrablatt and relaxed with cold drinks while enjoying the Fastbrunnen for the last time.

Around midday we checked out of the hotel and walked to the Hauptbahnhof to meet up with Pete and Iris. Together we took the train to their home town of Trier, travelling firstly along the Rhine to Koblenz, where we changed trains to follow the Moselle to Trier. The scenery was lovely, with river views, vineyards and (on the Rhine especially) many castles. The first part of the journey followed a route I had taken twice by boat (on a Rhine cruise with Chris's Mum in 2010 and with VT friends in 2015 as part of a Koblenz meeting) but it was interesting to see the same views now from the different viewpoint of a train. It was hard to take photos from the moving train, and the weather had turned a bit cloudy, but I gave it a go! 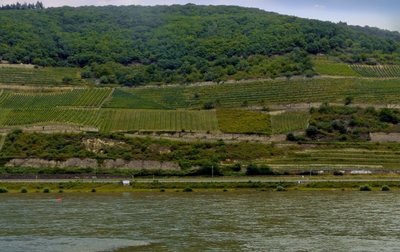 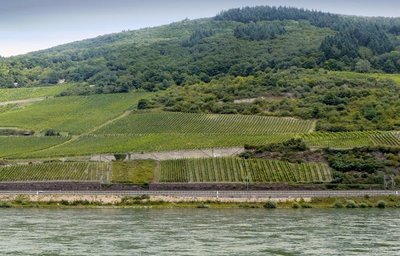 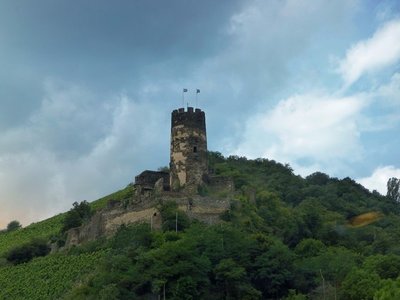 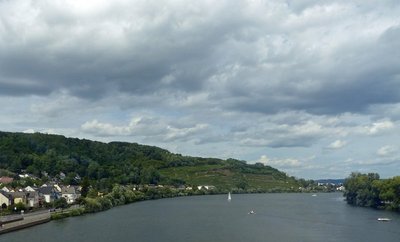 The journey to Trier took a bit under three hours, with a change in Koblenz. Pete and Iris live on the outskirts of the city so we took a taxi to their house. Chris and I were to spend the night in the welcoming guest room in the basement, so we settled in and had a brief look at the pretty garden and at Pete's pride and joy - a garden hut full of football memorabilia, mainly scarves. 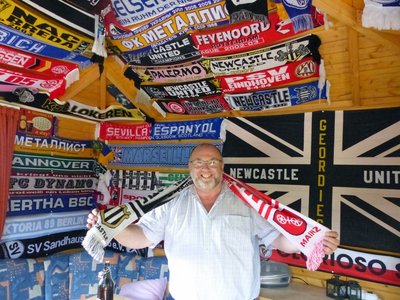 Pete in his hut!


We then headed out to enjoy ice creams at a nearby Eis Café, Agostino (great pistacchio in particular!) and later relaxed at home for a bit before going out again, this time for dinner in the Biergarten of the Blesius Hotel a couple of miles from Trier's centre. This was a lovely setting and we thoroughly enjoyed our evening. The hotel brews its own craft beers (actually known as Kraft) and both Chris's Helles and my Dunkles were excellent. We shared some 'German tapas' (various spreads with great dark bread) and I then had a very good piece of suckling pig pork with chips and a tasty mustard dip, while Chris enjoyed his Currywurst. 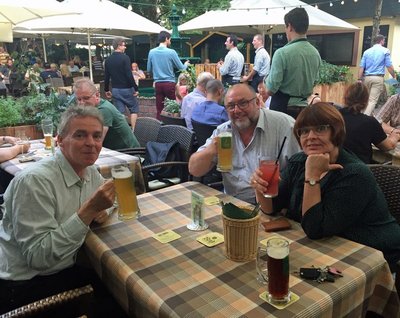 Dinner at the Blesius Hotel

After dinner it was back to the house for a night cap and then to bed. The next morning our flying visit to Germany came to an end. After breakfast Pete drove us to Luxembourg Airport, on his way to work in the city, and we flew home to Heathrow with BA. 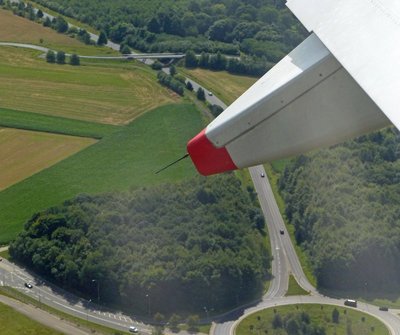 Take off from Luxembourg 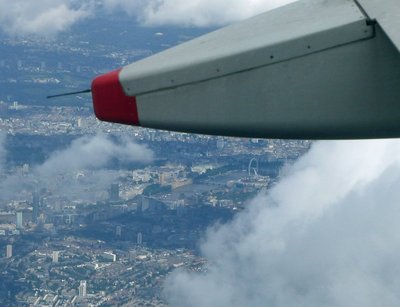 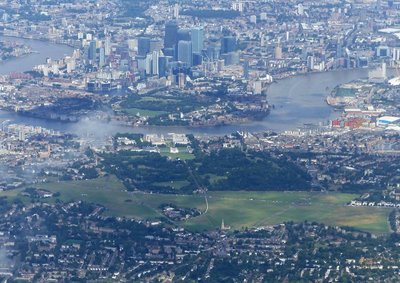 London from the air

This flight, somewhat inconveniently, landed not at Terminal Five, as most BA flights do, but at Terminal Three, so we had to transfer to the former to catch the Pod to our car. But fairly soon we were on our way, making the short drive home along the M4. It had been a rather brief visit to Germany but a great one!

What an expensive breakfast mistake Sarah but thank you for sharing that with us - I shall most certainly be aware of that pitfall when checking in anywhere in the future.

Thanks Yvonne - I reckon we've all made silly mistakes while travelling from time to time and it's useful, if a bit embarrassing, to share!

I once lived in Trier for six months in the 1960s, but haven't been back since. One of those places I keep meaning to return to.

Thanks Don. We haven't seen as much of the city as I'd have liked, yet, as we always seem to make flying visits like this, but what I've seen I like

Hi Sarah! Love your input! The cathedral & Marktbrunnen photo make the trip worthwhile for me!
No need to be embarrassed by writing about breakfast cost. A good warning. 25 Euros per person for fresh orange juice, good coffee, muesli, fruit salad & nice bread & cheese would floor even me ($37 Canadian dollars per person!) Abusive but I've had similar experiences, mostly with my parents in Europe... Mum and Dad visited me there & expected breakfast at Canadian prices... We learn through experience. The Net overflows with price comparisons and I for one forget what I read...
My way of travel is my own, I don't let other people's experience colour my own. I'm "almost" oblivious to reports on prices written by others... This is not everyone's way but it is my way to live "my" adventure. In Mainz, I'd have your warning in the back of my mind... but I would still go freely & learn from my own experiences. (I don't want to know exactly what to expect... I yearn for the unexpected.)
Be that as it may, writings by others inform me & stimulate my yearning to see the world. Thank you for your writing, much appreciated.

Thank you for your thoughtful comments Lou, and the kind words about my photo ?