Back to Chris’s roots 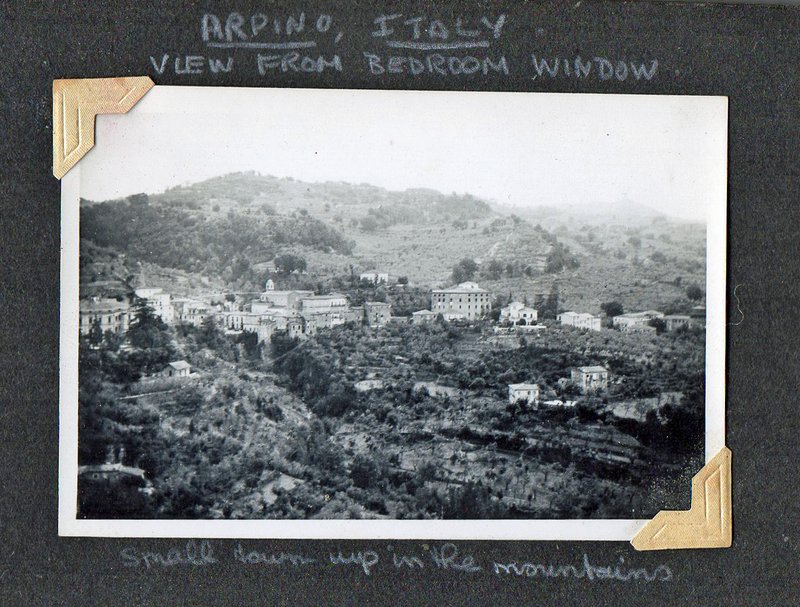 'Small town up in the mountains'
Teresa's photo, taken 1951

Towards the end of the 19th century one of many Italian families to leave their home town to seek their fortunes in England was the Quaglieri family from Arpino. They settled in Newcastle as did several other families from that region of Italy. Their small daughter, Francesca, grew up and married a local man, Walter (aka Wally), and they had three daughters - Vera, Teresa and Francesca. The middle girl, Teresa, was Chris's mother.

In 1951 Teresa’s mother took her to Italy, with a friend, as a 21st birthday present, and they visited Arpino which she described in her photo album of the trip as a ‘small town up in the mountains’. As you will see in this blog, little has changed. 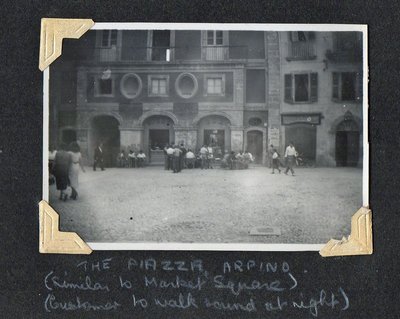 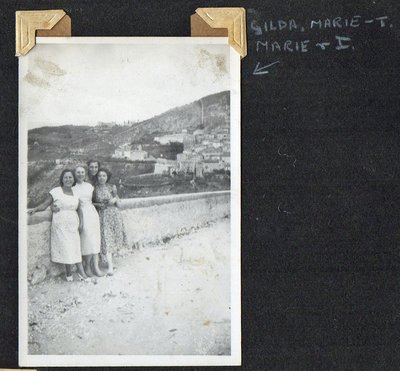 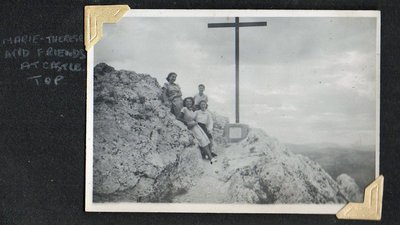 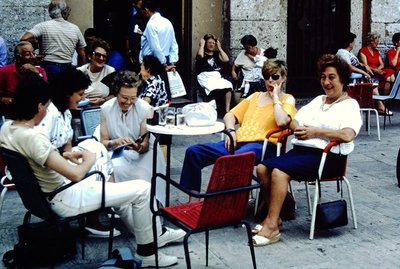 Chris, Teresa and some Italian relatives in Arpino, 1987

Thirty years ago, in 1987, Chris and I travelled with Teresa to Arpino – her second, and only other, visit to her mother’s childhood home. Thanks in part to World War Two, the Arpino and Newcastle branches of the family had not kept in touch, but Teresa had been able to track some down through a friend in Newcastle and we met up with them in Arpino (though they spoke no English and we no Italian, including Teresa).

Following that visit we again failed to keep in touch - language was a barrier and there was no social media back then to facilitate interaction. But we talked from time to time about going back to Arpino - not so much to see family as to see the town, and in particular to discover if it would still seem as charming as we remembered it, now that we are much more accustomed to the delights of rural Italy. And now, in 2017, we finally decided to make that return visit …

Arpino is not the easiest of Italian towns to get to, at least from England. Our journey involved six stages.

Stage one:
Up early on a Saturday morning we caught the Piccadilly line to Heathrow's Terminal 5 - by far the easiest and pleasantest of that manic airport's terminals. We were there in good time and had a coffee and pastry while waiting for our flight. 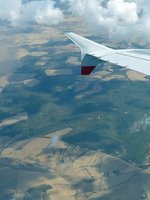 Stage two:
We flew to Rome Fiumicino with British Airways, a flight of a little over two hours. It passed uneventfully as all the best flights do, and landed on time.

Stage three:
First we had to get from the airport to Rome's main station, Termini, so we caught the Leonardo Express, the dedicated airport train, which takes about 40 minutes non-stop.

We had over an hour to wait at Termini till our next train, so we had lunch at one of several cafés on what seems to be a newly opened terrace overlooking the tracks. We didn't realise till we sat down and perused the menu that we had chosen a seafood place but I'm always happy to eat fish and Chris likes shellfish so we both found a snack to suit. My swordfish topped bruschette were a little dry however, and the buratta on Chris's prawn ones lacking in flavour. A shame, but the fresh orange juice was good and it was a relatively peaceful spot in the hubbub of the station.

Stage four:
Arpino isn't served by a direct train from Rome so firstly we had to catch a regional train to Roccasecca and change there. This train stopped frequently and took about an hour and forty five minutes to reach our destination, but we enjoyed the views of the Italian countryside and the time passed quite quickly. 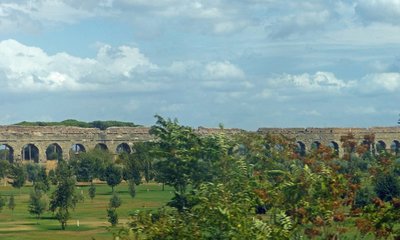 Acquedotto Claudio from the train


Stage five:
This stage should have involved another train journey but instead there was a bus replacement (I assumed because of engineering works but later learned from our host Carlo that it was a regular arrangement during the school holidays). We had to wait about half an hour at the sleepy Roccasecca station - time for a cold drink and a few photographs. 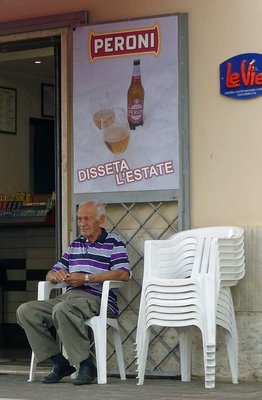 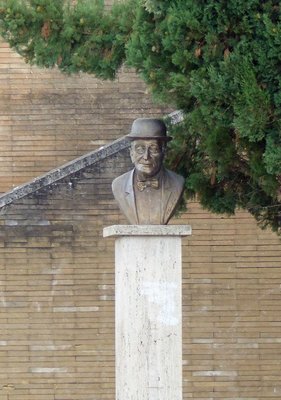 The bus arrived right on time (actually a large coach to carry just the two of us and one other passenger) and we proceeded to Arpino station by road.

Stage six:
The last part of our journey was also the shortest. The station in Arpino is near the bottom of the hill where the old city, the Centro Storico, is perched and where our accommodation was situated. 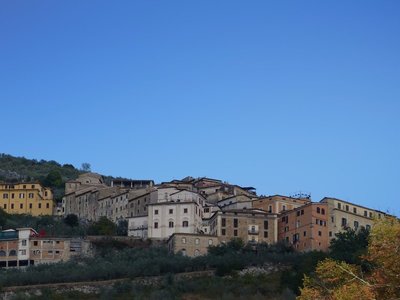 Looking up towards the town from near the station

Chris had emailed the apartment's owner, Carlo, to ask for advice on getting from station to town and he offered to pick us up if we called on arrival. We did so, he was there in minutes in his rather battered old jeep, and soon we were climbing the hill to the old town we remembered just a little from that previous visit.

As we drove Carlo asked us what brought us to Arpino and we explained. When we mentioned Newcastle he told us he had cousins there. Chris grew up hearing the names of the Italian families in the city mentioned a lot, and indeed knew some of them, and he had already recognised Carlo’s surname, Scappaticci, so he wasn’t surprised at this. As it turned out, he even knew one of those cousins, a member of the large Arpino Rea family, as they were at school together. It really is a small world at times! 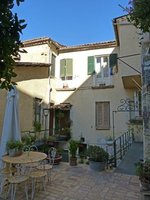 The garden,
approaching the entrance to our apartment

Carlo detoured past the restaurant where he is a chef (the Trattoria del Corso), so we would know where to find him if necessary, and then drove to his house which is about a five minute walk from the piazza (a hilly walk, as are all walks in Arpino!). This is a characterful historic house dating from 1625, according to the website. We had booked one of three apartments he offers there, the Camino (Italian for chimney or fireplace) and it was really super - a large sitting area with plenty of seating and the attractive fireplace that gives it its name (not needed, of course, in September); a kitchen area which we also didn't use (apart from the large fridge, to store water); a big bedroom with a double and a single bed and lots of storage space; and a decent bathroom. The only drawback was that we didn't have wifi, but for 50€ a night for the two of us, it was excellent value and proved to be a great base for our stay in Arpino. 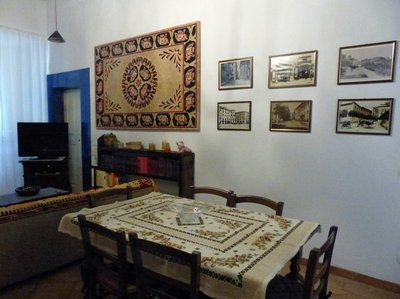 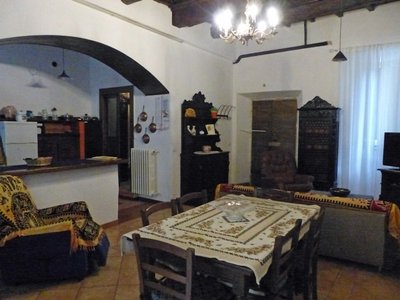 Sitting area and kitchen beyond 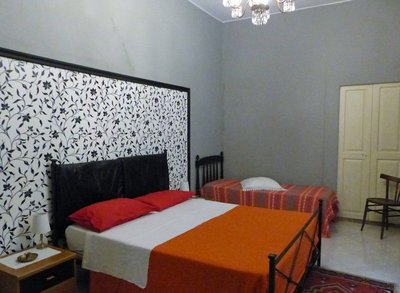 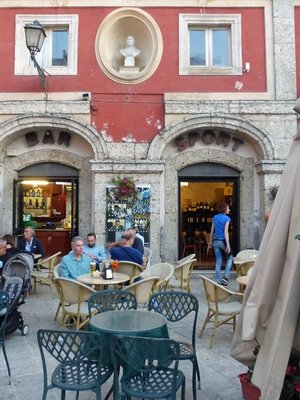 Back again after 30 years!

After a little rest and freshening up we went out to reacquaint ourselves with Arpino. We walked down to the piazza (everything is either up or down here!) and found the bar where we had enjoyed Sunday morning post-Mass drinks with the relatives (photo above, and also seen in Teresa's old photo of the piazza), as well as the one opposite, above which we had rented a couple of rooms. We settled outside the former, Bar Sport, for an aperitivo - my favourite Aperol spritz and a beer for Chris, which came with a couple of cheese pastries, bruschette and crisps.

Is there anything better than pre-dinner drinks in a small town in Italy? Locals were meeting and greeting each other after Saturday evening mass, children played in front of the statue of Cicero (more about him and his connection to Arpino later) and the buildings glowed in the early evening light. After our six stage journey we could relax and really feel that we had arrived in Italy. 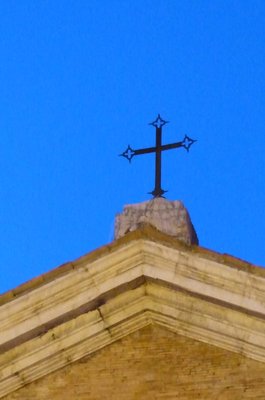 After our drinks we walked down to the Trattoria del Corso - not really because Carlo worked there but because I had seen favourable reviews of this informal local place. We enjoyed generous bowls of home-made gnocchi (made by Carlo perhaps?) and a carafe of local red wine for the princely sum of €16. Carlo spotted us from the kitchen as we were paying, and came out to check everything was OK at the apartment and we were happy with it - we were! 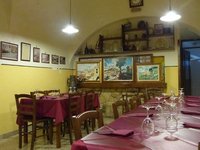 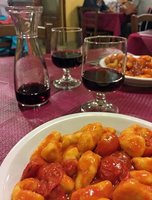 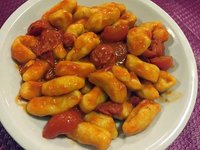 Gnocchi at the Trattoria del Corso


We strolled back to the apartment by moonlight, to relax a little before an early night. Tomorrow we would explore more of the town and seek out a few more remembered spots …

A great start Sarah,I am really looking forward to reading more on this off the beaten track place with family connections. Sometimes it's great not to have wifi .... lets you enjoy the moment more.

Great to see your old and new photos of this lovely town.
I have also not always been good about keeping in touch with remote branches of my family, so I know how you feel.

Interesting blog and a very complicated journey. All the best, Irene

I know what you mean about the wifi Albert, but it's important to me to stay in touch with family, given my mother's frail health, and luckily I can always do that with the phone

And of course, much more to come. I hope you all enjoy our explorations around Arpino and (briefly) slightly further afield

Very nicely presented. I have also made several 'roots' tours, which have always been most satisfying and interesting.