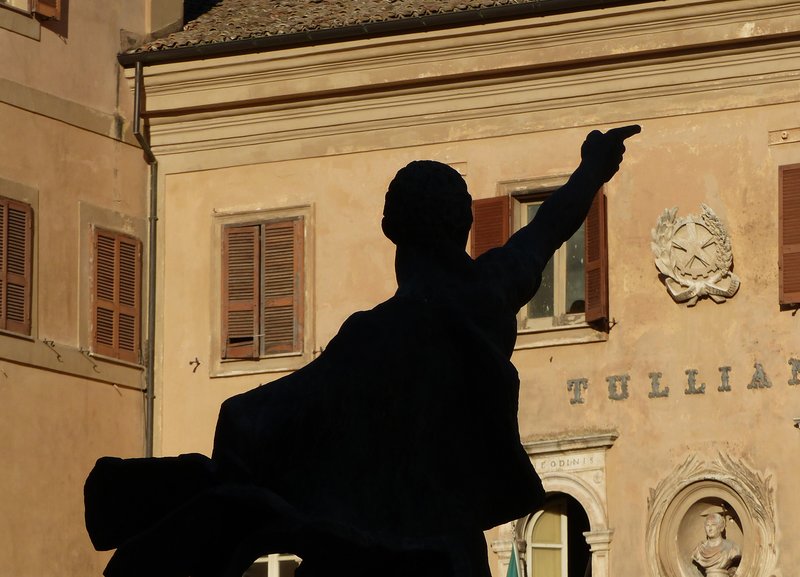 But first a final breakfast at the Bar Sport and a few last photos. 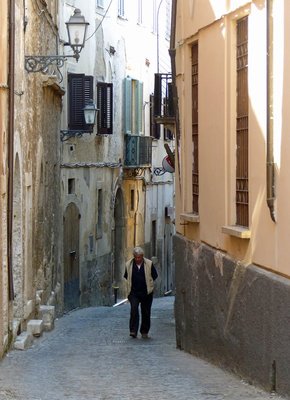 Local in via dell'Aquila Romana 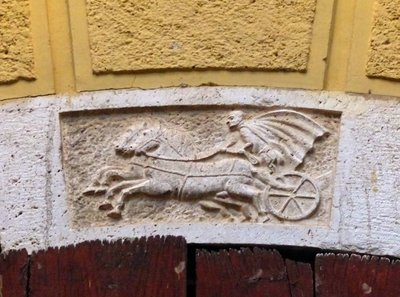 Above a door in via dell'Aquila Romana


The journey home was almost a mirror image reversal of the journey out, but with a few differences. The first of these was that it was Carlo's son who gave us a lift to the station, so Carlo himself waved us off at the apartment. We stopped briefly at a tabacchi in town as Carlo had said we would be able to buy train tickets there, but were told that not only was that not the case but that there was nowhere in Arpino, including the station, where that is possible - you have to go to the neighbouring bigger towns of Sora or Frosinone (presumably by train!) to buy them. 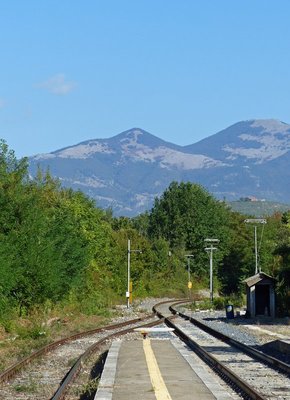 When we arrived at the station we saw that this is indeed true - it is nothing more than a couple of platforms and a shelter. There is a display board showing what trains are due and the platform they will leave from (which would be more helpful were the platforms themselves to be numbered!) and one of the machines used to validate tickets, but no sign of one from which to purchase. How we wished we had bought return tickets when we arrived at Fiumicino a few days previously! 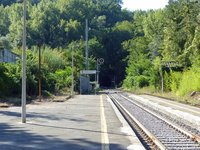 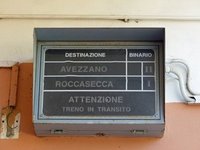 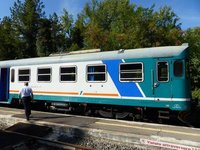 'Useful' display board - could this be our train? No - wrong platform, it turned out

So we had to board the train to Roccasecca without tickets, and that was the second difference between this and our outward journey. With the school holidays over, the bus replacement service had stopped and the train was running again.

The half hour journey passed quickly, and without any sight of a ticket inspector, and despite leaving Arpino five minutes late we arrived in Roccasecca with time to spare to buy train tickets there - only to find the one machine out of order and the ticket office firmly closed! 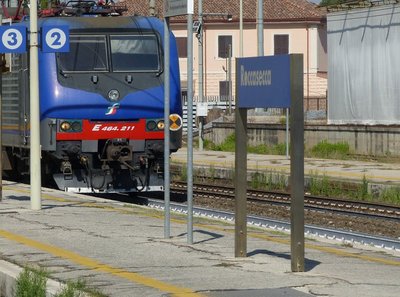 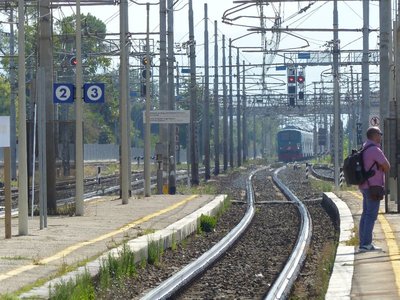 Again therefore we boarded a train ticketless, hoping that any inspector on board would understand our explanation and be prepared to sell us tickets rather than fine us! As it happened, again no inspector came along, despite this being a considerably longer journey (a little under two hours). Nor was there any ticket check on arrival at Roma Termini, so without intending to we had travelled the whole way from Arpino for free. As I said, this was not our intention, and if any officer from the Italian railways is reading this, we would be happy to pay what we owe if you care to send us the bill! 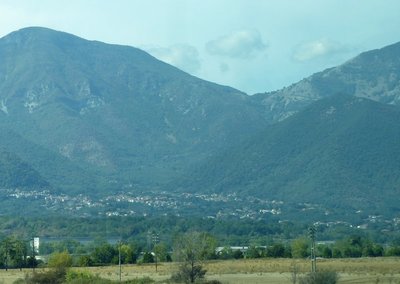 View from the train

Finally at Termini we found ticket machines that worked, so we bought two tickets for the Leonardo Express to Fiumicino before boarding our final train. This delivered us to the airport well ahead of our flight, with four hours to kill - the infrequency of trains from Arpino had meant that we had left much earlier than would otherwise have been necessary. But Fiumicino has a lovely new international terminal, with relatively quiet restaurants and seating areas, so we passed our time very pleasantly with a leisurely meal (great ravioli in butter with sage) and later a final gelato, for this trip anyway. 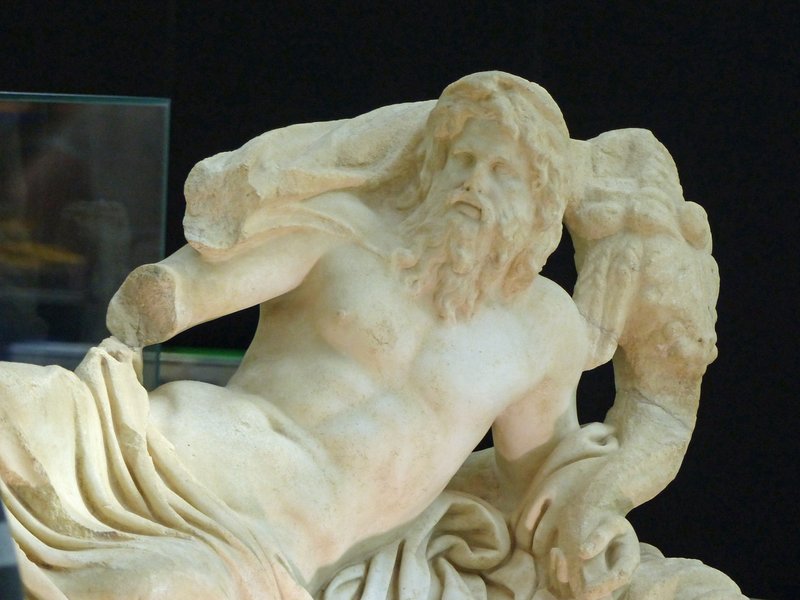 Roman statue of a river god, on display in the international terminal, Fiumicino 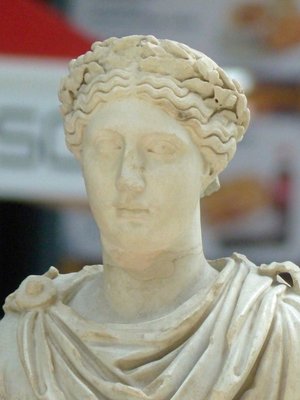 Roman statue of Appollo, on display in the international terminal, Fiumicino

Our British Airways flight left on time and passed smoothly, with good views of the Italian coast as we took off and of London as we arrived - I have even been able to make out our house in Ealing on one of the photos I took! 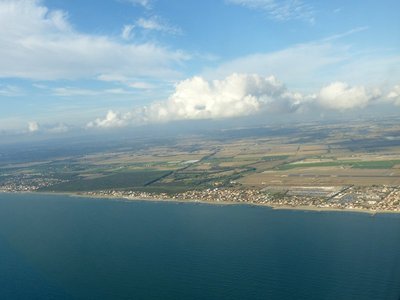 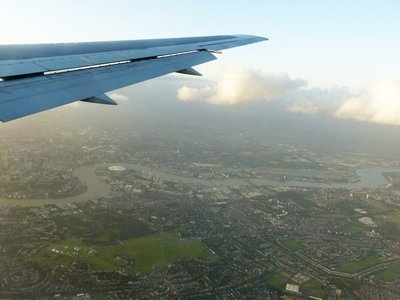 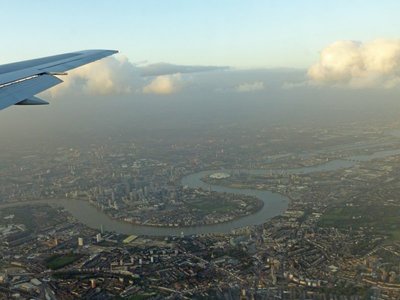 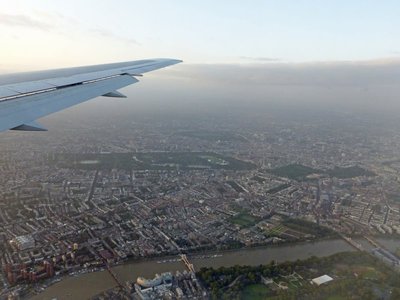 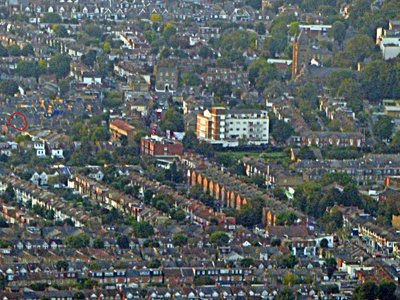 Blurry zoomed-in photo with our house circled in red!

Our arrival at Terminal Five was also smooth and we were home within an hour of touching down - just one reason we like living where we do.

Thanks for this interesting, useful entry, Sarah! Your Arpino-Roccasecca segment confirms my thought that travel in rural Italy is not that easy without a rental car... Still, you managed everything very well, I'm happy for you.
(Guess I just think/feel that in order to visit remote areas of Italy, especially for travellers on limited time & coming from North America, it's good to be prepared for connection delays when counting on train travel.) That's been my experience.
Love all the photos & will look at everything more closely soon! Thank you Sarah! Glad you enjoyed Arpino and the company!

Hi Lou, and thanks for visiting

Yes, you definitely need to allow extra time using public transport in rural Italy but I reckon that's true of many places, and it's well worth the effort!!

I very much enjoyed reading about your return visit to Arpino. Italian Railways should compensate you for the discomfort you suffered having to worry about not having a ticket for your travel!

Sorry to be slow to acknowledge your comment but I'm currently not getting alerts for comments left here. Trying to get to the bottom of the problem ...