How lucky am I! 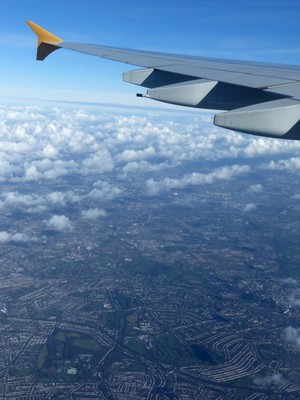 I work as a consultant in the UK public sector, and my work takes me all over the country, but very rarely out of it. But recently it took me to Abu Dhabi for a few days, and presented me with the chance to see a little of what was a new country for me. Last year Chris and I had changed planes here on our way to Kerala, but I had never actually visited any of the United Arab Emirates and was keen to explore somewhere new. So my colleagues and I arranged to fly out a day early to allow a little time for sightseeing.

While they left from Manchester I flew from Heathrow with Etihad, as on that previous flight en route to Kerala. We left on time at 9.00 AM in a half-empty plane, so as well as the extra leg room I had paid for I had the luxury of an empty seat next to me - room to spread out!

I enjoyed the inflight catering (spicy lamb kofta followed by chocolate mousse) and watched The Shape of Water, a film I had missed seeing at the cinema but was keen to catch. While a little unusual perhaps I rather liked it and was glad to have had this opportunity to see it.

We had clear skies much of the way and I had some great views of mountain ranges in Turkey, south of the Black Sea, and the barren desert and mountain landscapes to the south of Baghdad. 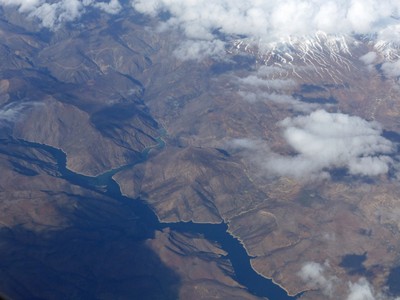 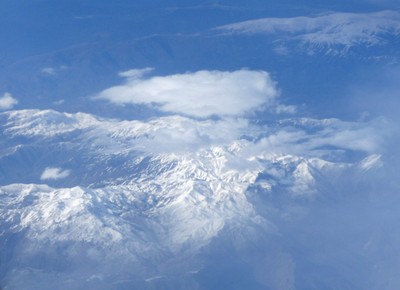 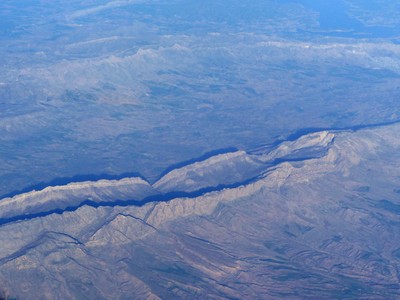 But by the time we reached the Gulf there was cloud, and although this soon cleared, darkness fell, and we came into land over the bright lights of Abu Dhabi.

We were on the ground about 40 minutes ahead of schedule, and with a smooth passage through passport control and baggage claim, I was in a taxi and on my way to the hotel (the Bab al Qasr) before I should even have landed!

The ride took about 30 minutes and the hotel when I reached it was very swish! It is very new and successfully (in my view) combines traditional and modern influences in its décor. The copper-coloured exterior shows the influence of Islamic architecture in the huge lower floor windows and entrance, while the large atrium on the ground floor, which doubles as a coffee shop, is a beautiful space, especially at night when the glass roof is illuminated in a sequence of colours. 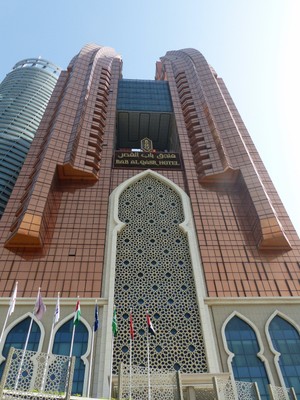 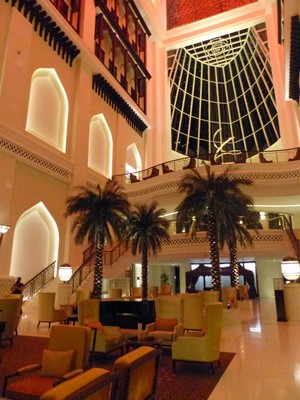 Front of hotel (taken the next day), and atrium 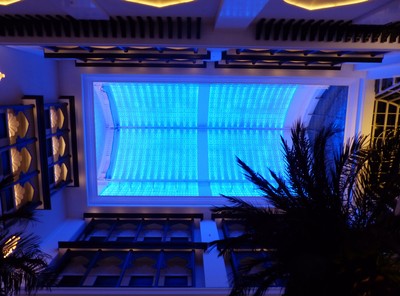 I had booked a standard room but was upgraded to a larger one on the 22nd floor, with king size bed, lots of seating, a huge bathroom with both tub and walk-in shower, and great views. But I didn’t linger long as I was due to meet my colleagues for a late dinner. I called for them in their room, which made my upgrade look pretty feeble, as they had scored with a suite! 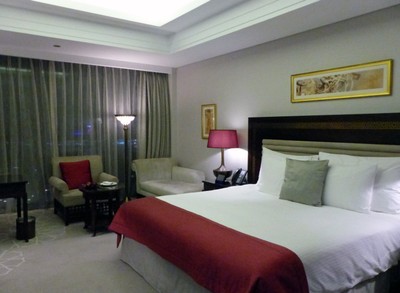 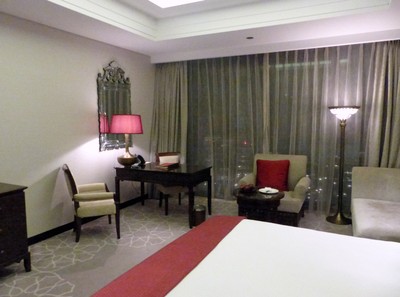 My bedroom at the Bab al Qasr hotel


We had a pleasant meal from the buffet on the lawn overlooking the beach, with lots of typical Middle Eastern dishes – I especially liked the hummus, always a favourite of mine. It was lovely after still-chilly London to be able to sit outside well into the evening. But bed soon beckoned, as it had been an early start for all of us. Tomorrow would be our sightseeing day. 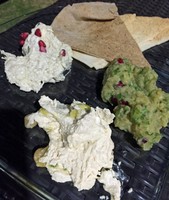 Buffet salads
(on a glass plate, not the table-top!) 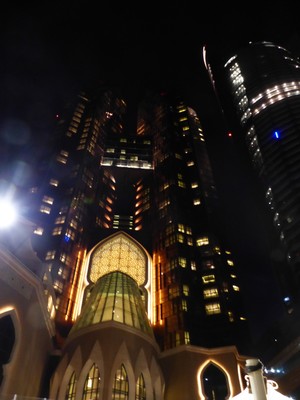 Hello, Sarah! I have always enjoyed reading your stories!

Thanks Victor - you were quick to read this, I only just posted it

Worth waiting for a day to read this Sarah and so looking forward to reading more in the days to come.

Thank you Aleksandra and Yvonne - more tomorrow I hope Yvonne

Interesting post. Whenever I come to Abu Dhabi i stay with family, so seeing what a true expatriate sees, is different.

Thanks for your visits Sally and Shane

Shane, I may get the chance to go back for more work, so if you have any recommendations please let me know!

But normally I work in exotic places such as Bedford, Newbury or Croydon (to name just three) so this was a real treat! No offence intended to those fine English towns, of course

Sounds like a wonderful beginning to your experiences in a new travel destination! Your hotel room was exceptionally nice to be sure -- what a treat! Love the photos too.

I was really lucky to have a work trip to Bellagio, Italy, way back in 2004 -- my first visit to Italy. I'm not sure any of my visits to Italy afterwards ever equaled that first one except perhaps my first visit to Venice.

Thanks for visiting my blog Sylvia. Yes, that room was lovely, as were the views from it

Visiting Italy for work must also have been really special for you. It's probably my favourite European country!