I slept well in my very comfortable bed but woke quite early (especially considering the four hour time difference) to see that I was up in the clouds - literally. Low early morning mists were drifting around and partly obscuring what will be, when I can see it properly, an excellent view of the Emirates Palace (a luxury hotel) just across the road. I battled with the only half opening window to try to capture the effect on camera, with only very limited success. 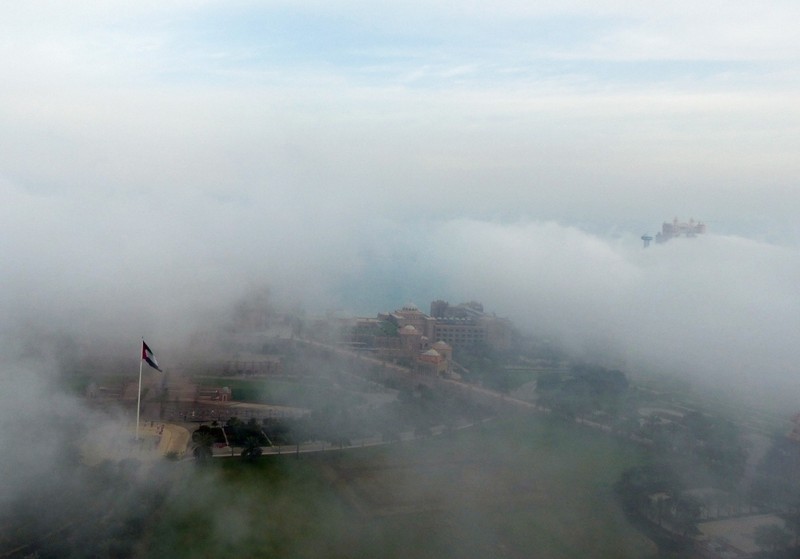 
The breakfast buffet at the Bab al Qasr is a comprehensive one, with cereals, fresh fruit, juices, yoghurt, assorted breads and pastries, cold meats, cheeses and salads, and hot food of all kinds, from an omelette station to vegetable curry and pakoras. With no appointments to keep today we lingered over this while making plans for a bit of sightseeing.

Setting out from the hotel we took a taxi to the downtown area, near the World Trade Centre and its souk. This occupies the site of a former market and opened in 2011 as a modern take on the traditional Middle Eastern shopping experience. It was designed by architects Foster and Partners to offer the traditional mix of small independent shops in a clean, contemporary environment – see https://www.dezeen.com/2011/05/06/the-souk-abu-dhabi-central-market-byfoster-partners/ for more information about the architecture, and more photos. 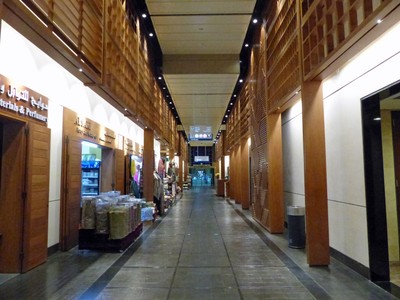 I’m not sure whether to suggest that anyone familiar with the souks of, say, Marrakesh would be disappointed with this, or otherwise. On the plus side, there is relatively little hassle to buy, but to counter that I found the modern setting very artificial and lacking in character or atmosphere. It’s certainly a good place to shop for your souvenirs however, with textiles, jewellery and lamps among the most appealing items, and bartering is fine so you should get a good deal if happy to haggle. My friend bought a pretty scarf, but I resisted all temptations, as I’m always cautious about shopping on the first morning of a trip - although with the rest of the visit to be mostly devoted to work I knew that might come to regret that restraint, as there may be few other opportunities to shop. This indeed proved to be the case, but never mind, my wallet will thank me! 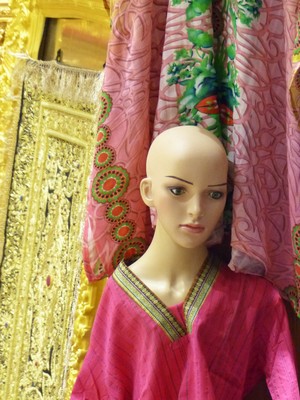 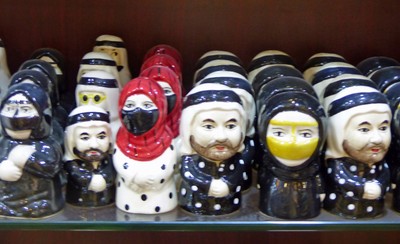 Salt and pepper pots in the souk

After spending a little time in the souk we set out to walk to the old fort, about a mile away. Our walk took us along wide streets lined with modern tower blocks, punctuated here and there by the minarets of modern, but traditionally styled, mosques. I enjoyed taking photos which reflected the contrast between these architectural styles. 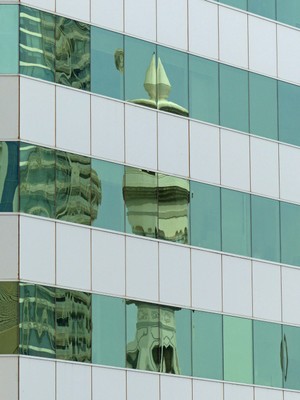 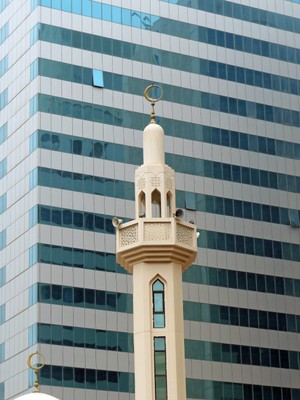 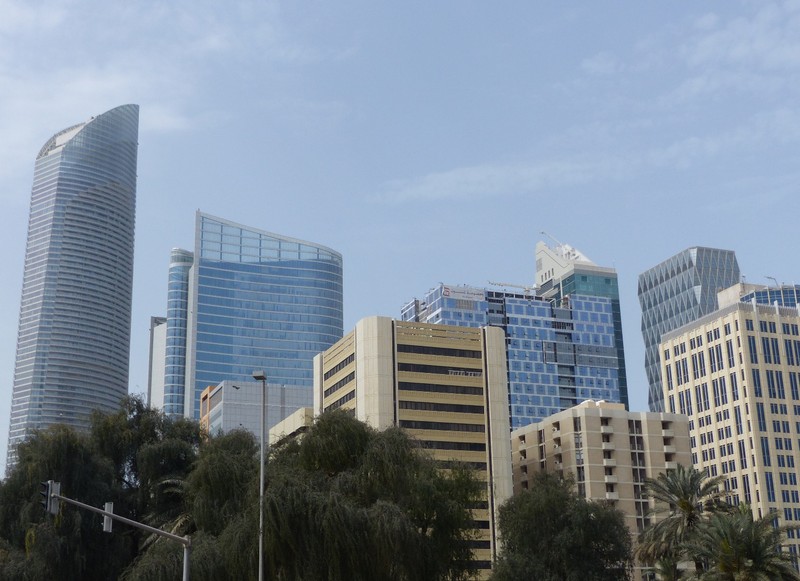 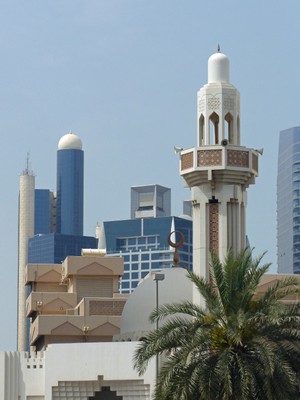 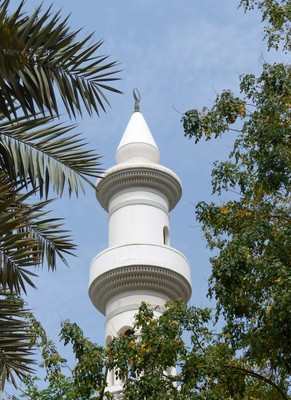 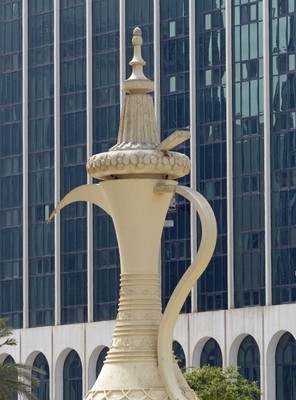 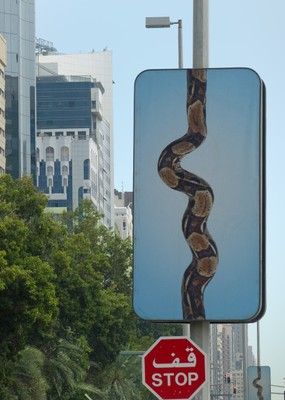 It’s as well that it was an interesting walk, as when we reached the fort we found it inaccessible due to major construction work all around it - a new cultural quarter is being built here, possibly to include a children’s library. Known as Qasr al Hosn, the fort was the first building constructed in what is today Abu Dhabi and was once home to its ruling family. It started life as a watchtower, built in the 1760s from coral and stone, overlooking the sea. Later it was extended and developed as a fort, its white walls reflecting the sun and acting as a guide to sailors. When oil was discovered in Abu Dhabi and the other emirates, in the late 1950s, it transformed the country, bringing significant wealth and leading to independence in 1971. The first Emir of the newly independent Abu Dhabi, Sheikh Zayed Bin Sultan Al Nahyan, turned the fort into a museum celebrating the country's history. 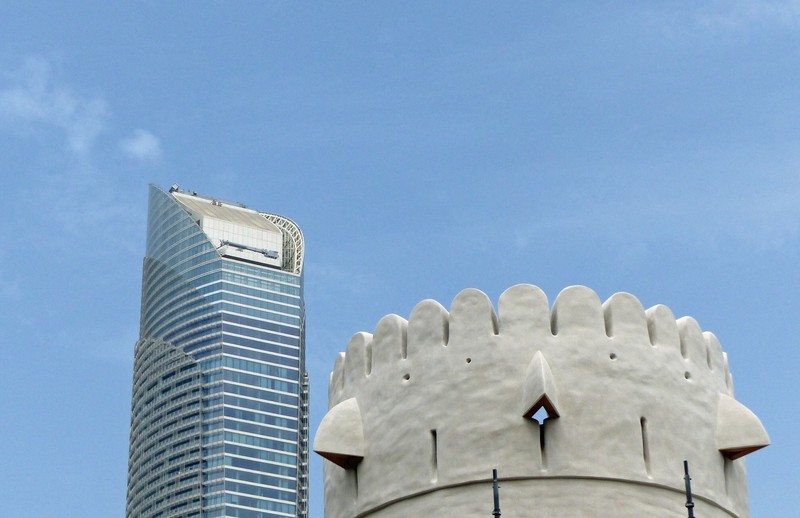 
Unable to go inside (and not learning till another day that there is a temporary visitor centre located nearby for the duration of the building work) we retraced our steps, albeit by a slightly different back streets route, and went into the large shopping mall, the World Trade Centre, next to the souk where we found refreshing drinks (fresh lemonade with mint) and clean toilets! 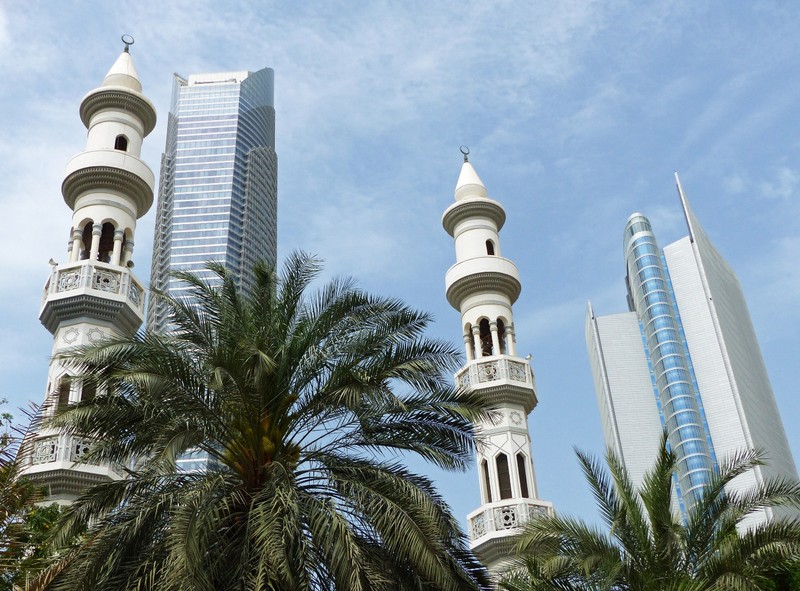 After our break we took a taxi to the relatively newly opened (November 2017) Louvre. This was developed in partnership with the Paris original and the French government, and is the first of several museums planned for the new Cultural District on Saadiyat Island where it is located – a Guggenheim Museum will follow, as will a museum devoted to the history of Abu Dhabi and named for its founder, Sheikh Zayed, and a performing arts centre to be designed by one of my favourite architects, Zaha Hadid. 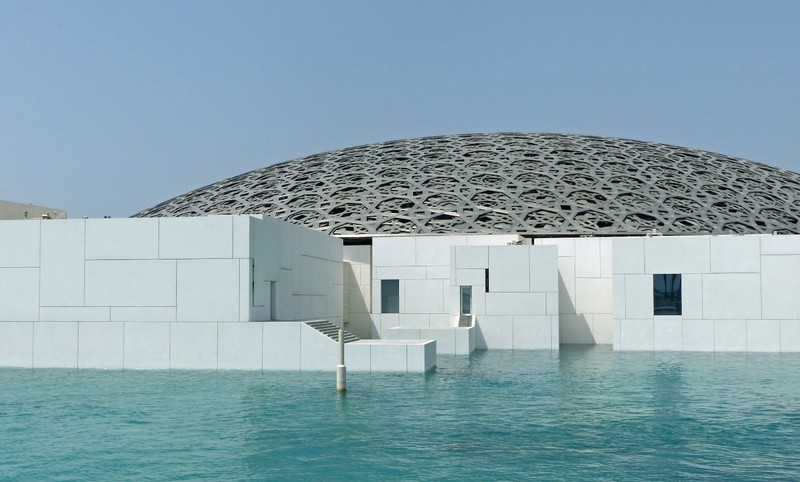 Despite being an offshoot of the Parisian museum this is very different architecturally. It was designed by French architect Jean Nouvel, inspired by the architecture and traditions of the UAE. The museum website describes it as ‘a floating dome of light and shade’, and goes on to say:

‘The centrepiece of Nouvel’s vision is a huge silvery dome that appears to float above the entire museum-city. Despite its apparent weightlessness, the dome in fact weighs approximately 7,500 tonnes (the same as the Eiffel Tower in Paris). Inspired by the cupola, a distinctive feature in Arabic architecture, Nouvel’s dome is a complex, geometric structure of 7,850 stars, repeated at various sizes and angles in eight different layers. As the sun passes above, its light filters through the perforations in the dome to create an inspiring effect within the museum, known as the ‘rain of light'. This ode to nature and the elements takes its inspiration from the palm trees of Abu Dhabi. Their leaves catch the bright sunlight from above to dapple and soften its projection onto the ground.’ 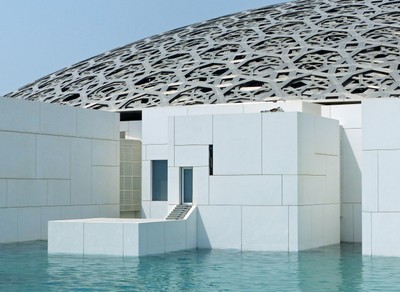 The dome arches over the 55 small buildings which constitute the museum. The intention was to create the appearance of a cluster of small, traditional houses, surrounded by the sea, as in an old coastal medina. You can read more about the design and build on the museum website.

And it was the architecture we had mainly come to see, as my companions had already been inside on a previous work trip here and I felt I had already walked a fair bit this morning and might not want to do enough more to get my money’s worth of the 63 dirham admission (about £12) before lunch. So we strolled around the exterior and took loads of photos, as every spot seemed to throw up a different vista of this striking building. 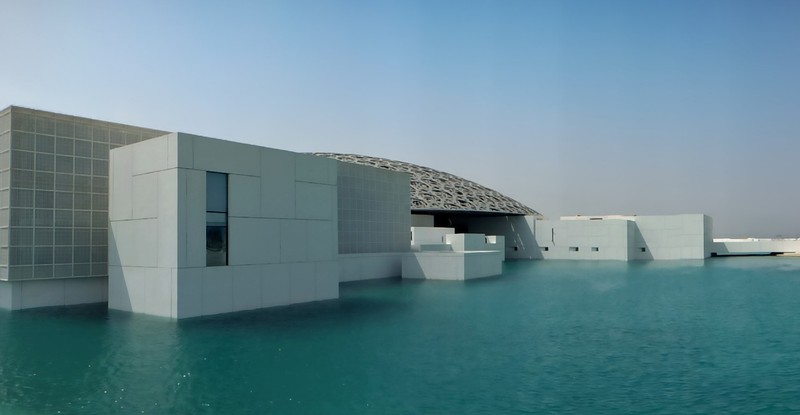 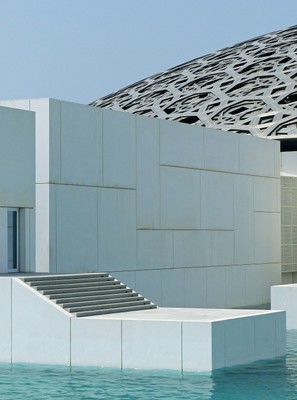 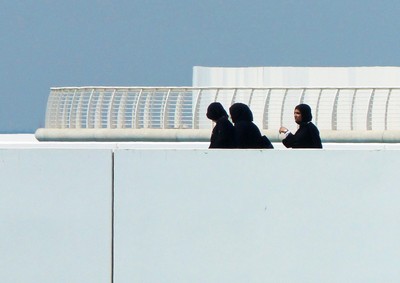 Visitors to the Louvre

We also went inside as far as we could without purchasing a ticket. The unpaid area unsurprisingly included the gift shop, but disappointingly the café was out of our reach beyond the ticket barrier. 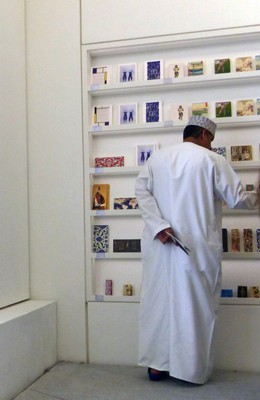 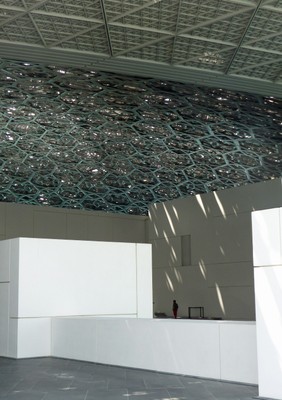 In the The Louvre 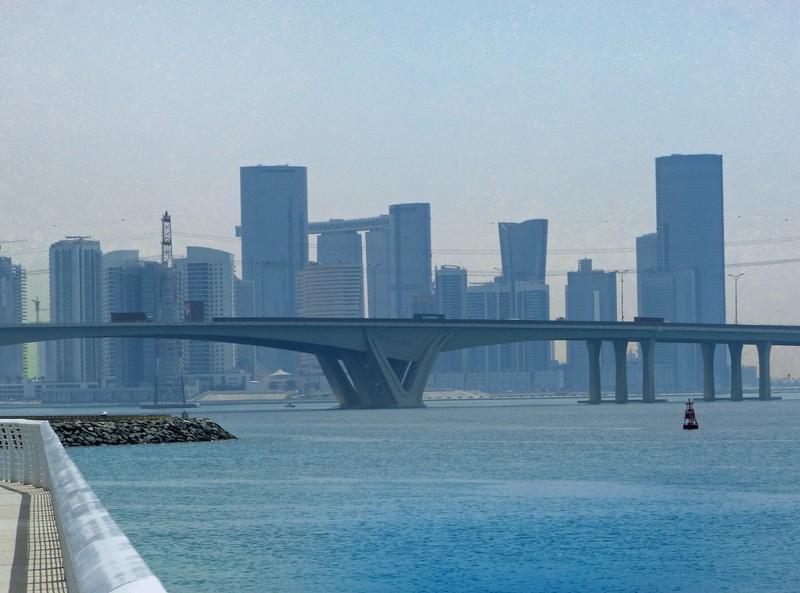 Downtown Abu Dhabi from the Louvre 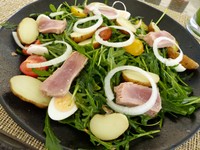 So it was back in a taxi to the hotel and a late but very good lunch at the poolside bar – a Niçoise salad with fresh tuna and quails’ eggs and more minty lemonade. 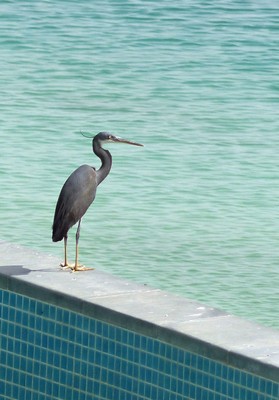 After lunch we separated, and I had a dip in the pool, rested a while on a shady lounger and then relaxed in my room sorting photos, writing this journal and doing a bit of background reading for tomorrow’s meetings.

In the evening we took advantage of the hotel’s happy hour to enjoy a drink in the bar (alcohol is served in the hotels despite this being a Muslim country) and a chat to the Nepalese barmen who served us, who told us they come to get higher wages than are paid for the equivalent work back home.

Keeping the multicultural theme going, we had dinner in the hotel’s Peruvian restaurant, Limo, which was very good – tasty food served with great style by friendly waiting staff. And I don’t think their friendliness was due just to the restaurant being very quiet (for a while we were the only guests) – good service is very much the norm here. Although it has to be said that it became a bit over-whelming after a while, and we were glad when other diners arrived to occupy the staff a little! Nevertheless, I enjoyed my ceviche, spicy chicken skewers with potatoes, mushrooms and corn, and chocolate mousse very much. 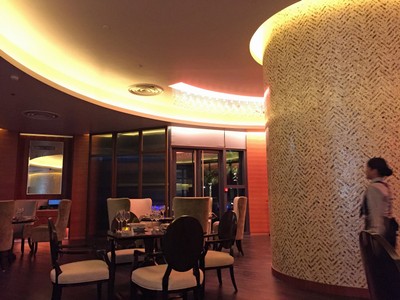 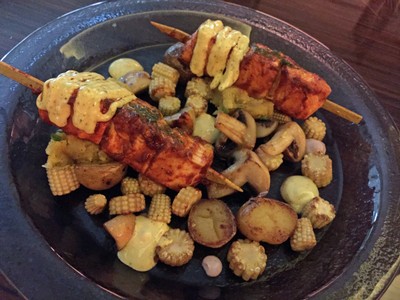 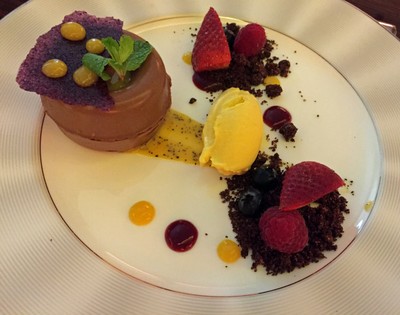 Then it was back to my room for a relatively early night - we have our first meeting at 9.00 tomorrow. But before going to bed I had to take a few more photos of the fantastic view from my room! 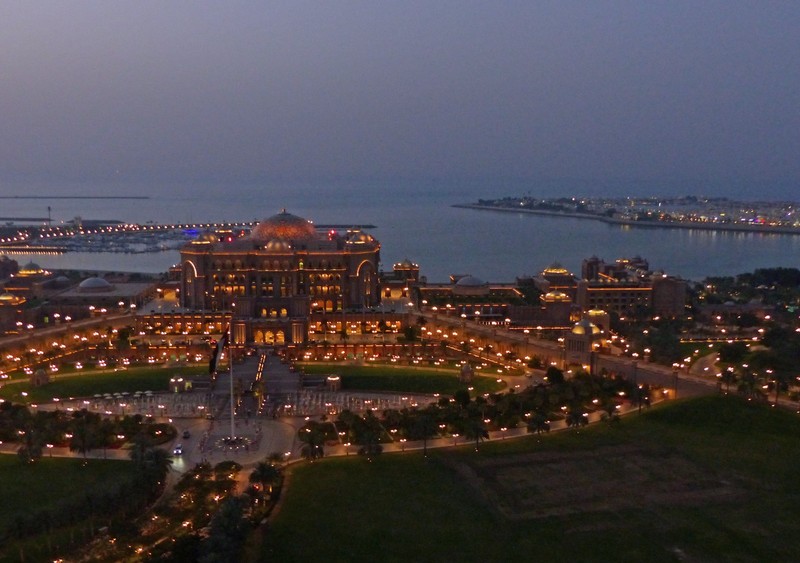 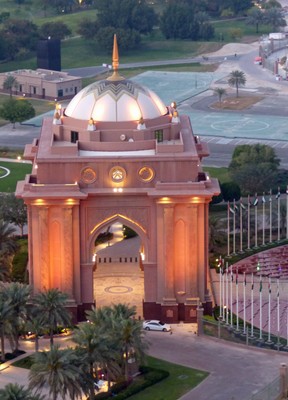 One of the gates to the Emirates Palace

What a lovely experience you had Sarrah!

Thanks for stopping by, Popi

As always Sarah, I was mesmerized by your descriptive writing and fantastic photographs. As I cannot see my aver visiting Abu Dhabi myself, I am wallowing in my virtual tour. Thankyou.

Hello, Sarah! You have an eye for beautiful things.Tyanks for your inviting story...

I love the cloud view. That must have been quite an experience. The Louvre is spectacular. Great photos.

Another super blog with some fantastic pictures

Thank you Malcolm and Sally. Yes, the Louvre is definitely spectacular! If I go back to Abu Dhabi (which is a possibility) I will make a point of going again with enough time to spare to go inside