We start our work 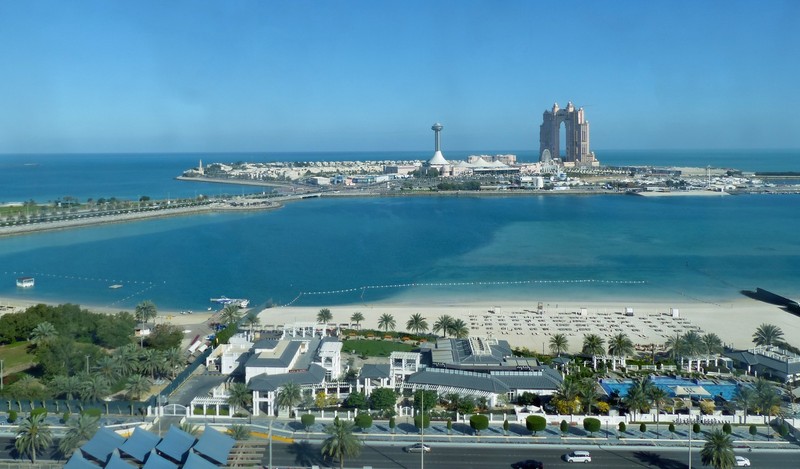 Sunday is a working day here (the weekend consists of Friday and Saturday, with the former being the day of prayer, naturally in a Muslim country) so we had our first business meetings of the trip. These were held in offices on the 12th floor of the Nation Towers, not far from our hotel, with excellent if distracting views from the meeting rooms. The towers are in fact much taller than we were ever able to go, with 52 floors to the smaller and 65 the larger. The views from the top must be amazing but we never went higher than this 12th floor.

We did however get to see an innovative facility developed for staff here, on the ninth floor, called appropriately Cloud 9. Here they can relax, eat, play (there’s a billiards table, chess boards, darts and table football), read and have informal meetings. The space is attractively decorated with natural colours and materials, and the walls have inspirational quotations. What a great space to encourage staff interactions and motivate people. 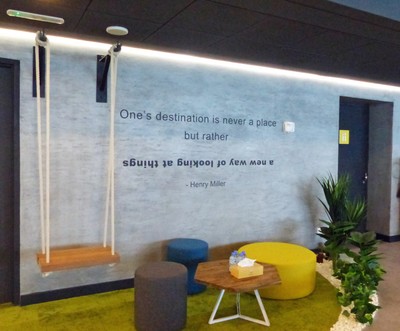 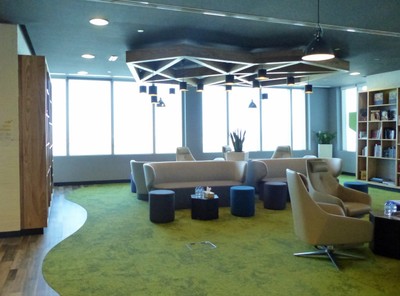 Cloud Nine at the Nation Towers

After our meetings we returned to the hotel for a late lunch in the outdoor bar and then separated - my colleagues to go shopping and me to take my camera for a walk! I first took a few more photos of the hotel. 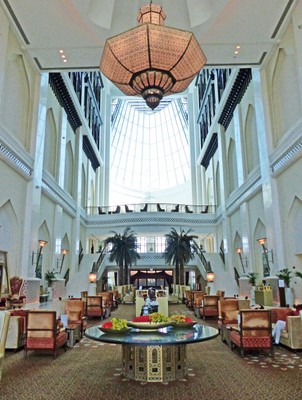 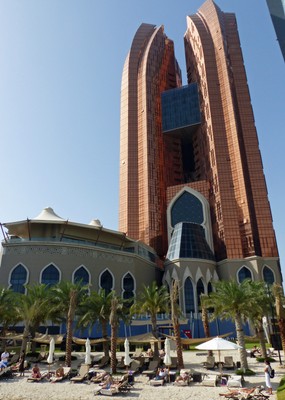 Bab al Qasr hotel atrium, and view from the beach

But I spent more time down by the beach where a cormorant caught my eye because it apparently had no fear of the nearby sunbathers and sea bathers. Research since my return suggests that this might be a Socotra cormorant, which according to Wikipedia is considered to be a vulnerable species owing to the large amount of development along this coast. If so, I was lucky to see him! 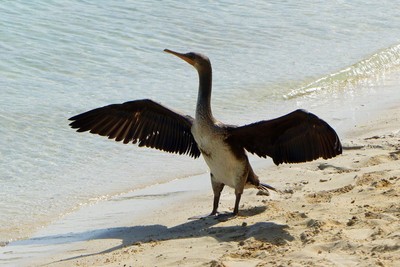 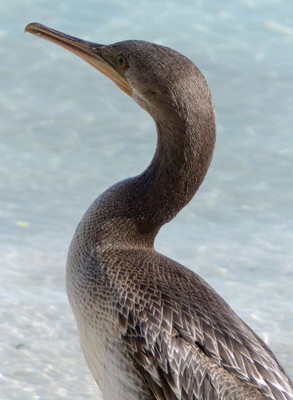 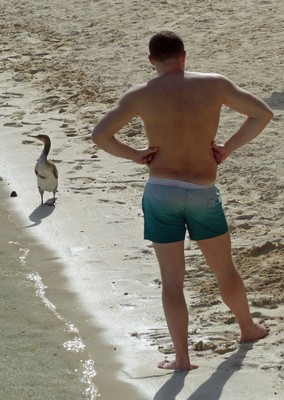 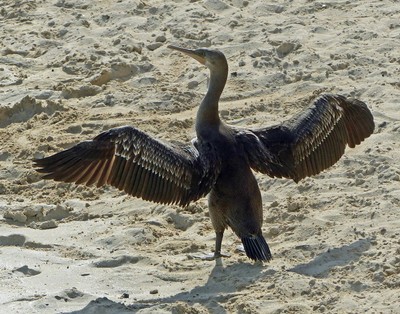 Cormorant on the beach

I found a report in an online newspaper, The National, dated January 2013, announcing a scientific study of these birds:

The Socotra cormorant, a rare bird that nests in large numbers on offshore islands in the UAE, is to be the subject of a study by the Ministry of Environment and Water … The breeding population has been estimated at 110,000 pairs, spread across the Gulf, Eritrea and Somalia. About a third of the birds breed on offshore islands in the UAE, mostly in Abu Dhabi waters. The birds live in colonies of several thousand and feed on fish. The study is part of efforts to protect the Socotra Cormorant, which is under pressure due to the destruction of its habitat and marine pollution.

Later I relaxed in my room for a bit and also caught up on emails, before being distracted for a time by the music and excitement of an Indian wedding party outside the hotel next door. My video shows just a little of the activity - and when I remind you that it was shot on full zoom from the 22nd floor you will get some idea of how noisy the music was! 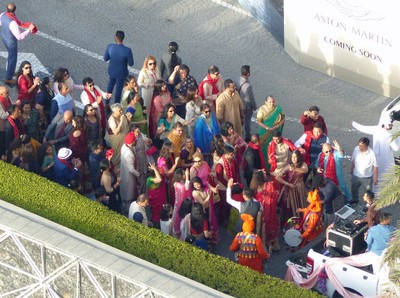 Indian wedding at the Jumeirah hotel

In the evening I joined the others for another happy hour drink. We then went to dinner at the nearby (next door but one) Jumeirah Hotel’s Lebanese restaurant, Li Beirut. We ate excellent meze including hummus, baba ganoush, moutabel (another aubergine dip), chicken livers in pomegranate molasses, tasty olives and more. 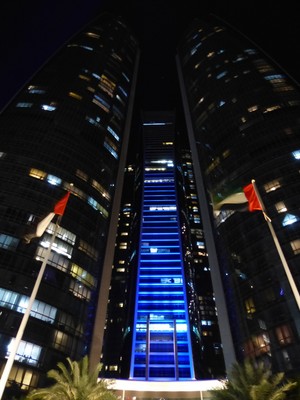 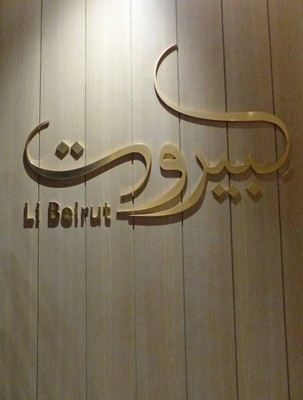 
The bonus was that the Indian wedding I had seen earlier from my room was in full swing on the terrace by the swimming pool below us and we could enjoy the spectacle and music as we ate. 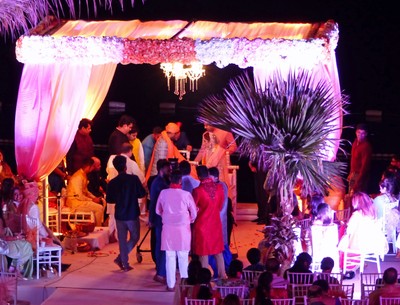 
Our outing was also a chance for me to photograph the Emirates Palace at night and the ever-changing light show and illuminated fountains at its gate. 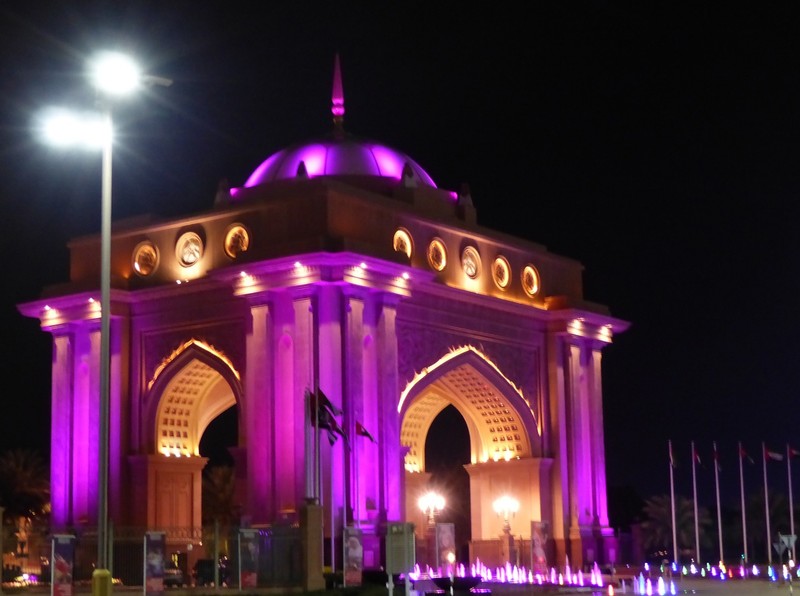 Gate to the Emirates Palace at night

This might be shorter than your usual Sarah but it was still worth waiting for. The cormorant! The wedding video!! The photographs!!! I love baba ganoush but have never heard of (let alone tasted) moutabel so must look out for a recipe and (if you recommend it) give it a try.

Just looked it up and it seems that the addition of basil and chillies is the main difference.

Thanks so much Yvonne. Yes, I can definitely recommend moutabel. It's made with tahini so is more like hummus in texture. The one we had wasn't really spicy - I checked online and I think I found the recipe you saw, but this one seems more like what we ate: http://www.alwaharestaurant.com/recipes.htm. And it was always garnished with pomegranate seeds which went well with it. They're everywhere over there!

Thanks Sarah. I will give that a try - and like the idea of added pomegranate seeds as I love those and they are full of anti-oxidants so very good for us too.

Let me know how it goes

So interesting how much you saw despite having to work. Absolutely love the photos and video here!!

I loved your brave cormorant. He was quite the showman. Amazing photos.

Yes, there was plenty to photograph here for sure Malcolm, though I only managed to see a fraction of the city and nothing at all beyond it. But, yes, we did see quite a bit between working Sylvia

The cormorant was positively nonchalant, Sally - I guess he's used to finding people on his beach!