Another morning of meetings about the library service, in the same room as yesterday - and with a short time to wait before our first meeting started I seized the opportunity to take some more photos of the view. Opposite us, across a narrow stretch of water to a small man-made island, one of many dotted around the coastline here. Indeed, the city of Abu Dhabi sits on an island. Most are connected to each other by bridges, so wherever you drive (and everybody drives here) you find yourself near or crossing water. This particular island, for which I couldn’t trace a name, is home to a shopping mall with a tower that looked to me to be one you could go up (though we never had a chance to investigate), an unusual-looking hotel (still under construction I think), some high-end properties and embassies, and at its western tip the Al Kareem Mosque. 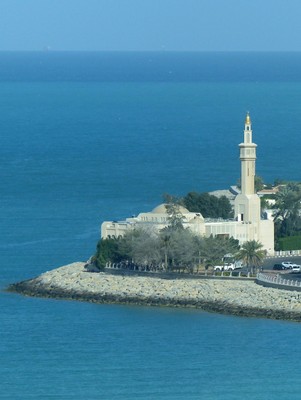 View of the Al Kareem Mosque from the Nation Towers

Over to our left I got great views of the Presidential Palace complex, beyond the Emirates Palace marina (yes, that hotel has its own marina!) Looking down at the Palace from here made us look forward even more to our scheduled visit in a couple of days’ time! 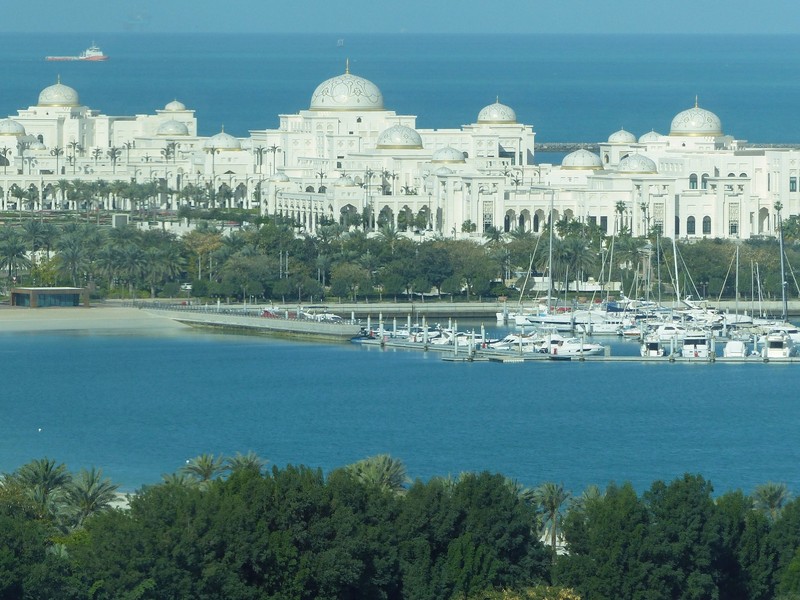 View of the Presidential Palace from the Nation Towers


The meetings went well, and we returned to the hotel in time for lunch at the pool bar (I had a nice pizza with the local touch of a spicy lamb topping) and after catching up with some notes from the meetings, we made the most of the free afternoon by relaxing on the hotel’s small beach and taking a dip in the sea. Being more of a lagoon it is very calm, and the view across to one of the many small man-made islands still apparently under construction was nothing special, but it was nevertheless a pleasant swim and at least I can now say that I’ve swum in the Persian Gulf! 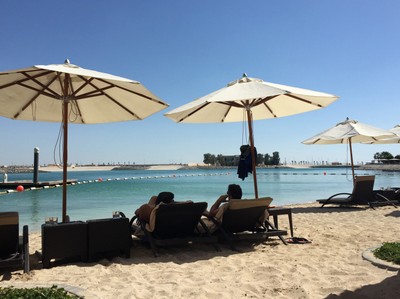 View from my lounger


Late afternoon, just before sunset, one of my colleagues and I went for a short walk armed with our cameras, with the aim of capturing the colourful lights that illuminate the Emirates Palace (opposite our hotel) and Presidential Palace (just down the road). These are both very grand and opulent, and indeed might with some justification be called ostentatious, but the use of coloured lighting at night is effective. 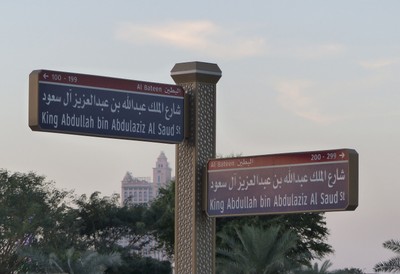 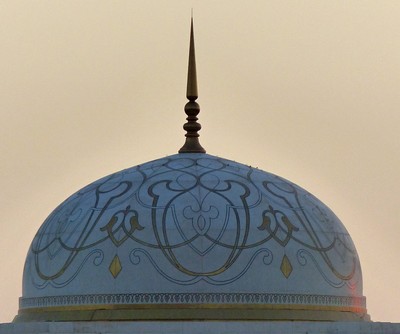 Gate to Presidential Palace at sunset 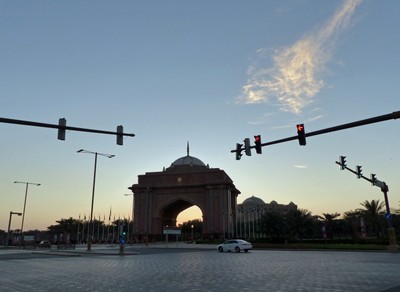 Gate of the Emirates Palace hotel 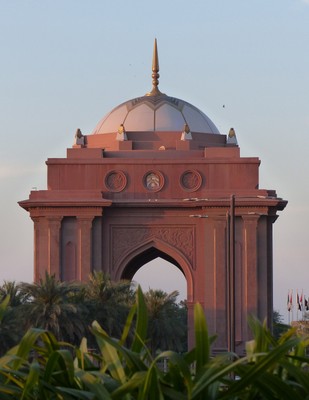 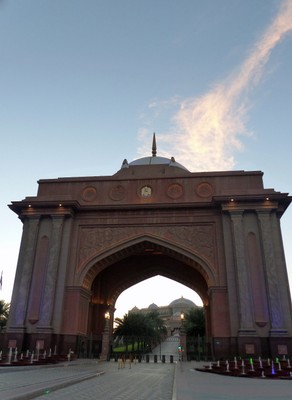 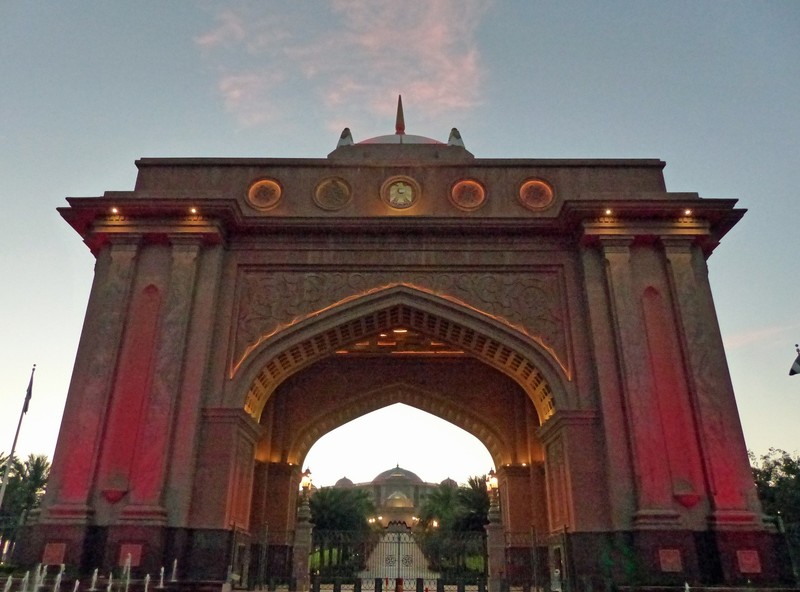 Gate of the Emirates Palace hotel

And not only are the buildings illuminated but also the many small fountains in front of the gate to the Emirates Palace. We arrived at this spot just as the call to prayer rang out over Abu Dhabi and it made a fitting backdrop to the dancing waters, which I attempted to capture in a short video . 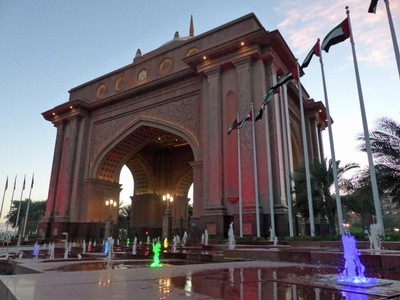 Gate of the Emirates Palace hotel at night


By the time we’d retraced our steps back past the hotel to the Presidential Palace we were a little late to get good photos, as the light fades fast once the sun has set. We will have to go back another evening if we can fit it in. 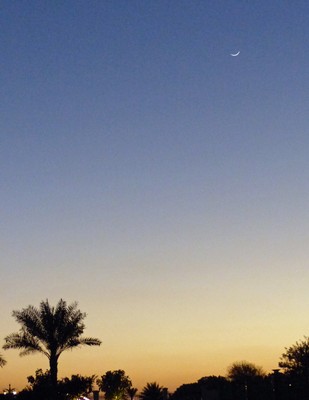 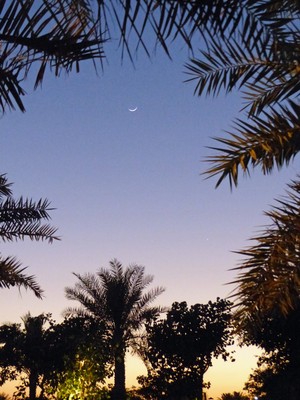 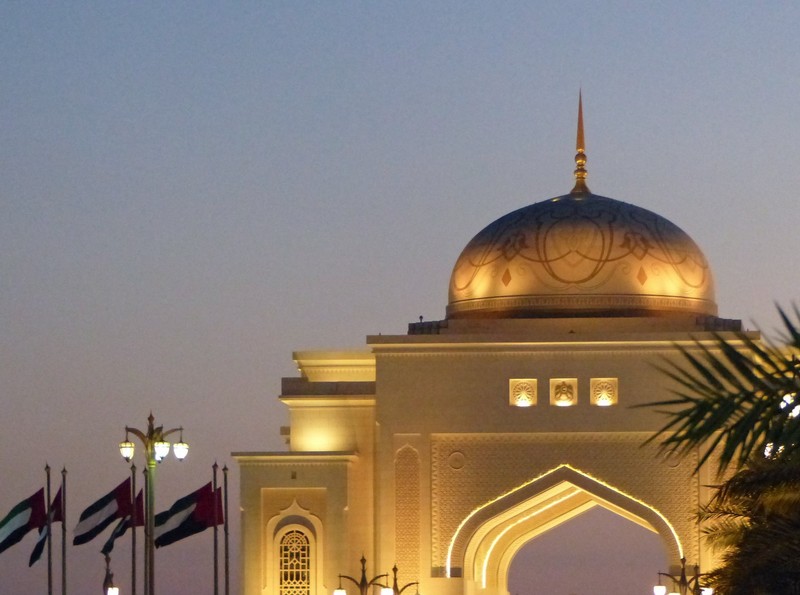 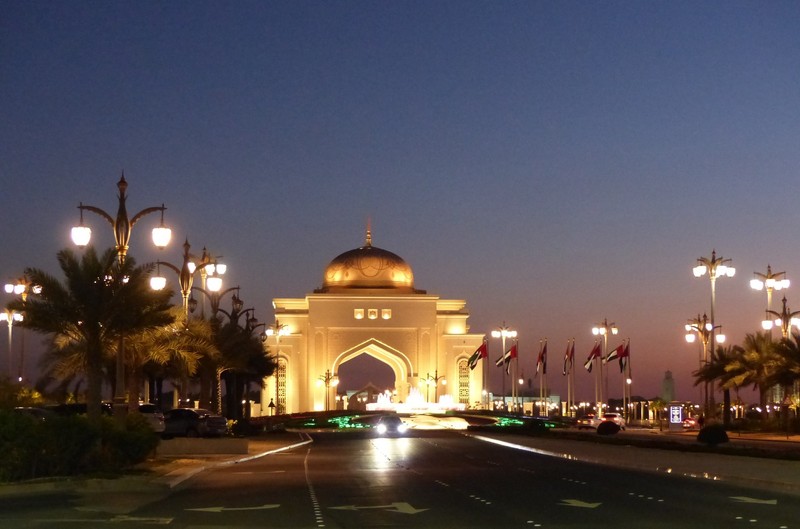 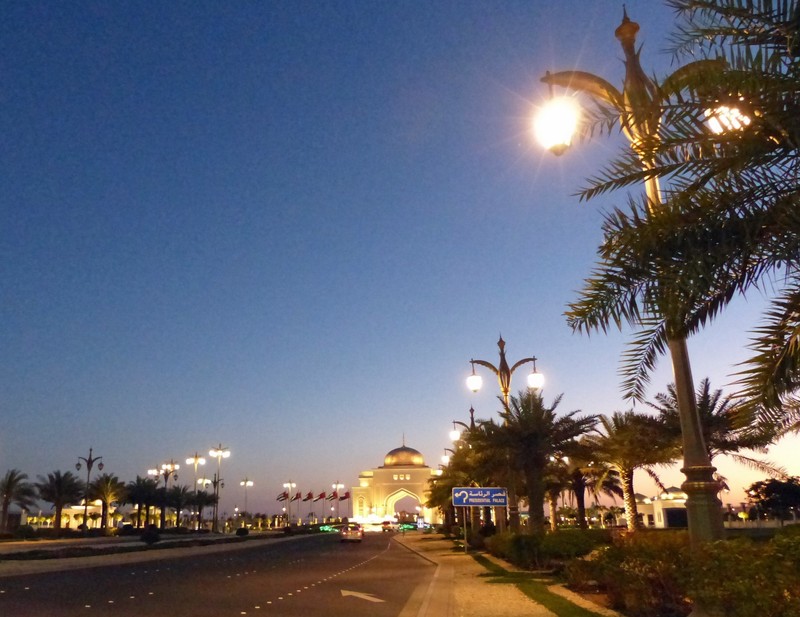 Gate to the Presidential Palace and Corniche at night

Meanwhile the bar beckoned with its lure of happy hour, and after that we had dinner in the hotel’s buffet restaurant, Artisan. I’m not a great fan of buffets (breakfast excepted) but Middle Eastern cooking lends itself well to this form of catering as you can graze on the many delicious meze dishes, salads etc. I was less impressed with the main course dishes, but there were many dainty little sweet dishes to tempt us afterwards, many no more than a single mouthful in size, so it was easy to try several - which of course we did! 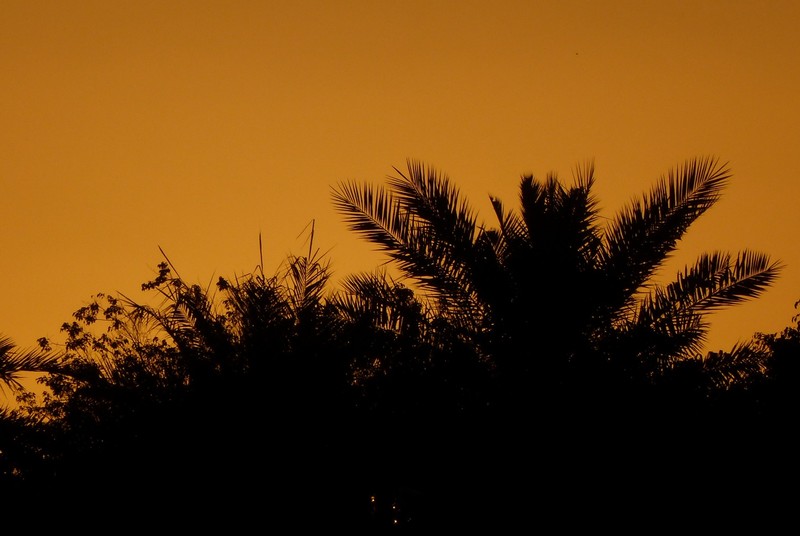 Well done, Sarah! Your video is a great illustration here!

Thanks Victor - we were lucky with the timing

Great setting for your meetings..

The spicey lamb pizza sounds fantastic. I may try that at home. Great idea! How perfect to have the crescent moon over Abu Dhabi. You can't plan things like that. Well, you can if you have the time to travel when the moon is right. Whoever planned your meeting did a good job . . .

Thanks Don and Sally

We certainly didn't plan the meetings according to the moon - our main objective in settling on the dates was to fit it in before Easter as from April it starts to get rather hot over there!

Another enjoyable read, and the video was a great added feature!

I don't often make videos but the combination of dancing fountains and the call to prayer made it an obvious choice!