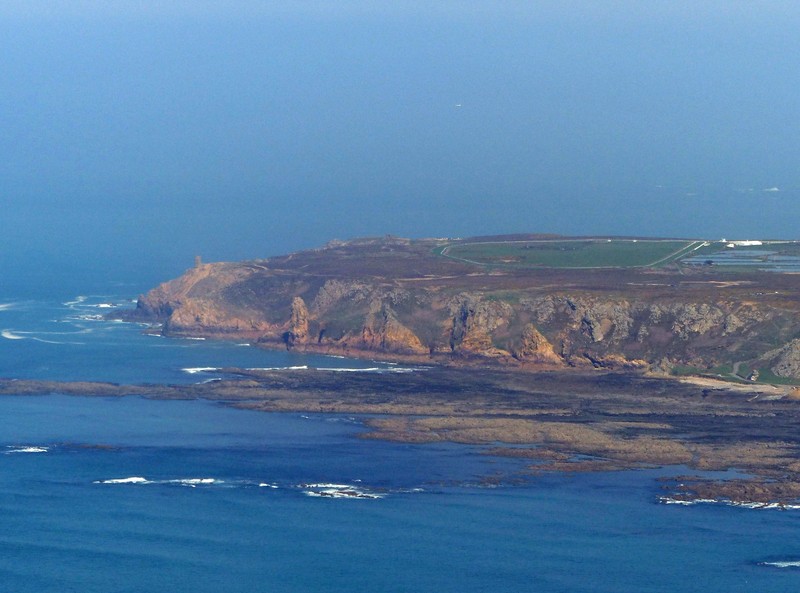 After my mother died last September we discovered that a small portion of her savings were invested in a Jersey fund, and that to access them we needed to get probate there as well as in the UK. We could either pay a Jersey solicitor to do the work or go over there ourselves. As the latter option worked out cheaper, and would give us a chance to see a little bit of an island we had never visited, it was a no-brainer!

So today saw us boarding an EasyJet plane at Gatwick Airport, en route to St Helier. The weather at home had just, finally, turned spring-like, so our timing could have been better, but at least that meant clear skies for the flight, and thankfully we landed, about 20 minutes late, to even warmer sunshine than we had left behind in London. 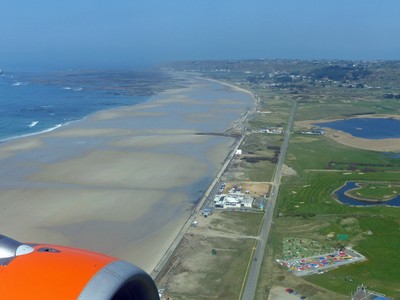 We took the bus (#15) from the airport to Liberation Square, where our hotel, the Pomme d’Or, was situated. This hotel has a long history. Victor Hugo stayed here in 1852, and the hotel later played a significant role during World War Two when Jersey was under German occupation. It was commandeered to serve as the German Naval Headquarters and German Harbour Master’s office. The swastika flew above its entrance as a constant reminder to the people of who was now in charge. My photo of this period was taken at the Jersey War Tunnels, which we visited the following day.

When the island was finally liberated, on 9 May 1945, the swastika was replaced by a Union Jack as celebrations began on the square outside and all over the island. That square is now known as Liberation Square, and 9 May celebrated as a public holiday each year. We were to learn much more about this period in the island’s history tomorrow, so I will save it for my next entry and return to the present. 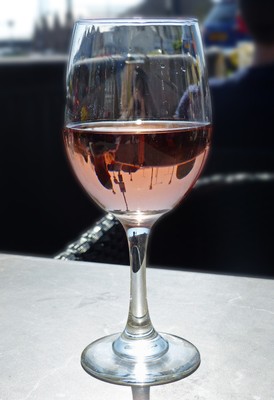 By the time we arrived at the hotel it was after 2.00 pm so we were able to check in and leave our bags in our room before heading straight out again to find a late lunch.

Everyone was out enjoying the sunshine and it was quite hard to find a table at an outside café, but eventually we got one at a place called The Square, just around the corner from the hotel. We shared some light bites - garlic bread, chicken strips and calamari rings. The food was just right and the drinks too (I had my first rosé of the season) and although the service could have been faster we enjoyed relaxing in the sun after our journey.

Given our difficulty in finding lunch we thought we should book a table for dinner later. We tried several places in that vicinity, including a highly recommended Mexican restaurant I’d hoped to eat in, but all were fully booked or not serving food in the evening. So we wandered around the back streets, taking a few photos as we explored, mainly of details such as statues and street art. 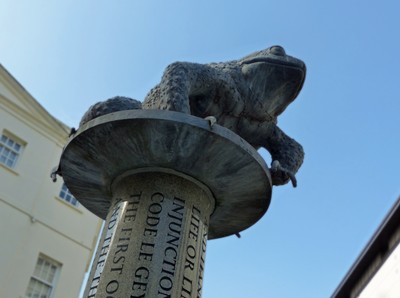 When I took this photograph I didn’t know the significance of this toad which sits atop a column in a small triangular ‘square’, Charing Cross, but I researched it later. I learned that Jersey is the only one of the Channel Islands to have a native toad, and it is a unique species, different from those found in England, for example. Being the only island with toads led the residents of the other islands to use the term ‘crapaud’ (French for ‘toad’) to refer to those of Jersey in a derogatory way.

But instead of resenting this, the locals made the most of their ‘nickname’ by proudly erecting a monument crowned by one of their toads! This reflects the location of the monument on what was originally marsh land and home to many of the toads. Later, between 1698 and 1812, it was the site of the island's prison, and this column, erected here in 2004 as part of the commemoration of the octocentenary of Jersey's status of Crown Dependency, is engraved with extracts from the Code Le Geyt of 1698 concerning crimes and applicable punishments.

Nearby in a small park known as Parade Gardens we came across a statue of Lieutenant-General Sir George Don, Jersey's Lieutenant-Governor from 1806 to 1814. He looks very impressive in his uniform, and on either side, at the foot of his granite pedestal, sit the figures of Commerce and Industry. Don is credited with developing Jersey’s road system as a result of his frustration at not being able to easily move troops around the island. 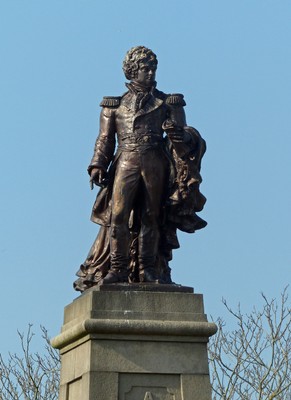 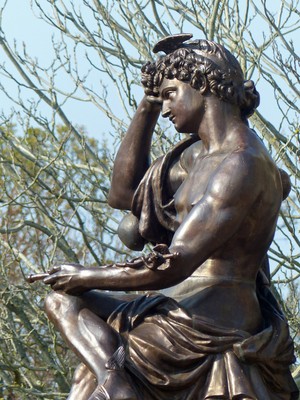 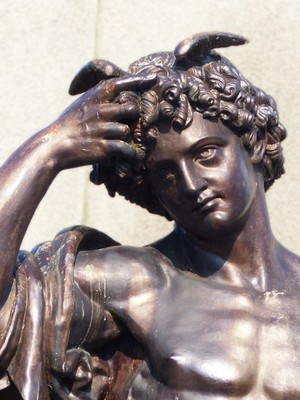 Is this Commerce? Or maybe Industry 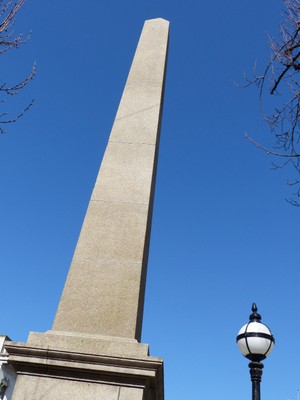 Also in this vicinity is Le Sueur Obelisk on Broad Street, a monument to five-time St Helier Constable Pierre Le Sueur. It is according to the Island Wiki ‘widely acknowledged as irredeemably ugly’ although I would be generous and say boring rather than ugly! However, the website goes on to quote author and genealogist J Bertram Payne who in his 1863 ‘Gossiping Guide to Jersey’, expressed his dislike of the memorial as follows:

‘The monument itself is a sad blot on the good taste of the island, and is merely an exaggeration of those spa toys one buys at Sandown or Clifton. At each side of its square base are lions' heads, pierced for fountains. The water, however, has never been forthcoming, so the lions look like hapless sea-voyagers - retching without effect. We do not know who designed this thing - this cross between a pillar and a post. We wish we did, for his name ought to go down to posterity, encircled with the halo that should belong to the inventor of the ugliest bit of pillo-pyramidical construction in the world.’

In between taking photos we eventually managed to book an Italian restaurant which looked OK, and then headed back to the hotel for a short rest back at the hotel and a chance to unpack and settle in properly. 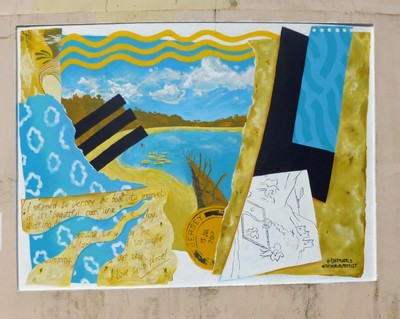 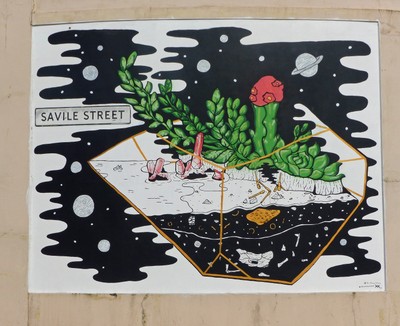 As a Catholic Chris wanted to attend Sunday mass but in order to have a free day for exploring tomorrow we decided on the Saturday evening service. St Thomas’s church, about ten minutes’ walk from the hotel, proved to be an attractive and imposing building. 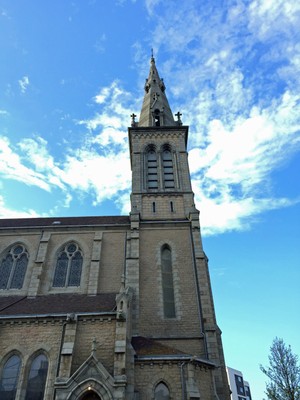 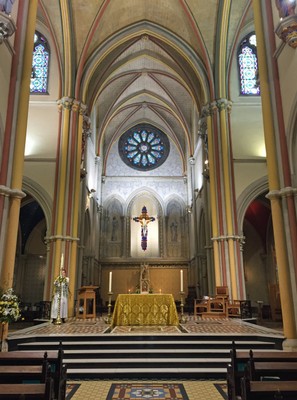 It is the principal Roman Catholic church in Jersey and was built in the 1880s to replace an earlier, smaller (much too small) church on New Street just to the south. It has some lovely stained glass and an impressive collection of church silver and relics. I had unfortunately left my camera behind at the hotel but was able to get some passable photos with my phone. If you are interested there is a very detailed description of the church on the Island Wiki: https://www.theislandwiki.org/index.php/St_Thomas%27s_Church 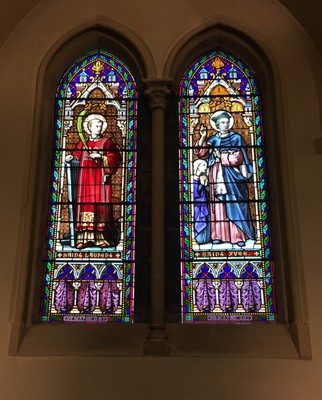 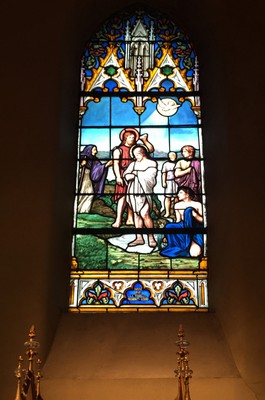 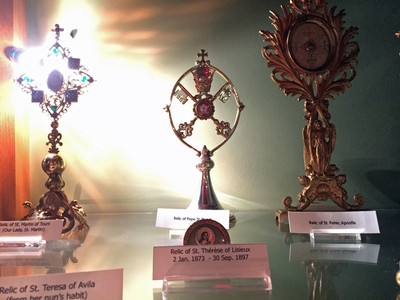 Just a few of the relics

Emerging from the church after the service we felt a few spots of rain so hurried to the restaurant, Bellagio. We were early for our reservation so had a drink in the bar downstairs before going up to the restaurant on the first floor to eat. The food was good (I especially liked our shared meat antipasto platter), the house wine very good, and the service friendly. A good choice. 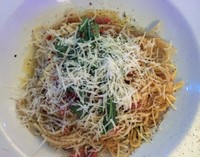 Spaghetti with pancetta and chilli 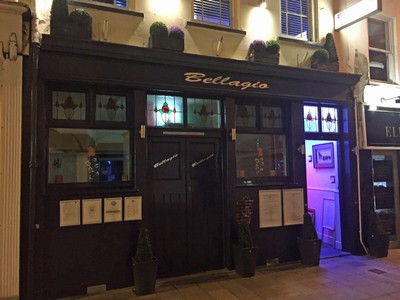 
We then retired to our hotel room to watch a bit of TV and catch up with emails (both of us) and journal (just me!)

This is a place I have always wanted to visit — to see the Victor Hugo house, for one thing.

Looks and sounds like a place I'd want to visit! Your nice photos confirm that. An excellent read as always, Sarah!

Don, you have reminded me that Victor Hugo stayed at the Pomme d'Or - another piece of its history. I will add that info to the above. Thank you!

Fun to find someone else who attends Mass while traveling. We've had so many wonderful experiences in the different churches. People always say they want to meet the "locals" and this is the perfect way to do that. Great art, great music and friendly people . . . what more can you ask?

Very true Sally. Chris likes to attend mass when possible (in some countries of course it isn't) and we've had some memorable experiences - although standing for over two hours in the very hot cathedral in Stone Town Zanzibar is not among my favourites!

I love the Channel Islands. Never knew about the Jersey Toad before though, and I'm looking forward to seeing what you thought of the war tunnels

Good on your mother for giving you a chance to visit Jersey. A nice way to remember her.

Malcolm, the War Tunnels are coming up very soon, but [spoiler alert!] we loved them! And yes Rosalie, we were grateful to Mum for 'sending us here'