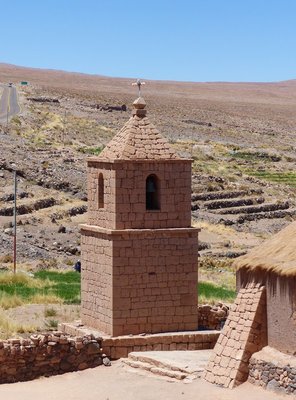 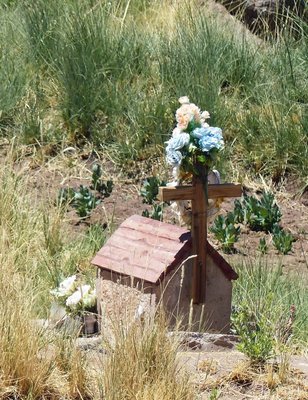 After a morning touring the lagoons of the Atacama Desert we stopped for a short while in Socaire, a small village about 100 kilometres south east of San Pedro which was once a centre for gold mining in the region. Unlike the latter, which is today completely dominated by the tourist industry, Socaire is still a traditional Atacama village, its economy based on agriculture (fruit trees, beans, corn, quinoa, alfalfa) and (non-metallic) mining. 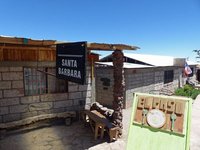 A handful of small simple cafés here cater to visitors passing through as we were, and we stopped in one that was recommend by Daniel, the Cocinería El Paso, to have some lunch. We sat outside, Daniel having gone ahead while we took photos of the nearby church to secure the only roadside table. Some tasty chicken broth and a choice of entrée (I had omelette and Chris a burger), with lots of great crusty bread and a soft drink – all for a set price of around 5,000 pesos.

Talking of the church, this is the older of two in the village – the other is newer and stands in the centre, whereas this one is on the southern edge. It is a very traditional Atacama structure, built of adobe with a thatched roof. Its bell tower stands slightly removed from the main building and is constructed completely of stone. The setting on the edge of the village, with typical terraced fields behind, makes for some interesting photos. However, the church was closed when we visited so we couldn’t go inside. 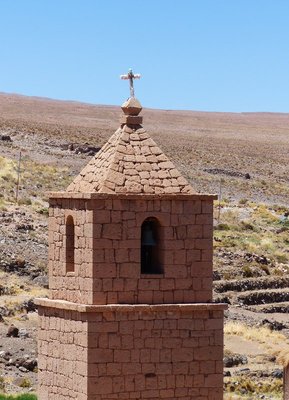 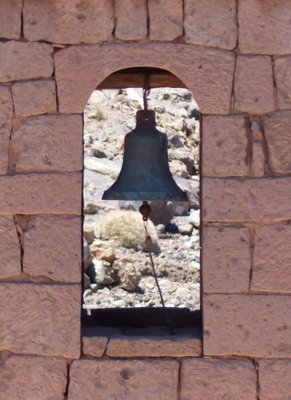 Socaire is the last settlement on this road (route 23) in Chile. Here the paved road from San Pedro downgrades to a stony track and continues past the lagoons of Miscanti and Miñiques, the Salar de Aguas Calientes and another lagoon, Tuyajto, before reaching the border. But we were going in the other direction, returning to San Pedro after our morning at the lagoons.

The Tropic of Capricorn

Between Toconao and Socaire, route 23 (the main road running north-south through the Atacama) crosses the Tropic of Capricorn. A large sign marks the spot and is naturally a popular spot for visitors to stop for photos, as we did. The surrounding scenery is characteristically empty desert but you’re unlikely to have this place to yourselves – however this is a bonus when it comes to the obligatory group photo as you’re bound to find someone happy to take this for you (no selfie stick is long enough to fit in this big a signpost!) 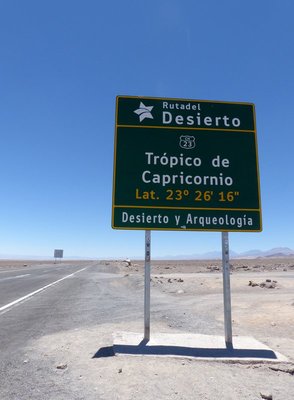 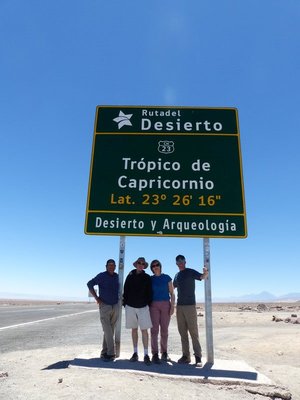 As well as getting that photo, do take the time to look around you as the scenery here is stunning. Atacama’s most active volcano, Láscar, smoulders to the east of you, while to the west are the salt flats shimmering white in the heat, and the road seems to go on for ever. 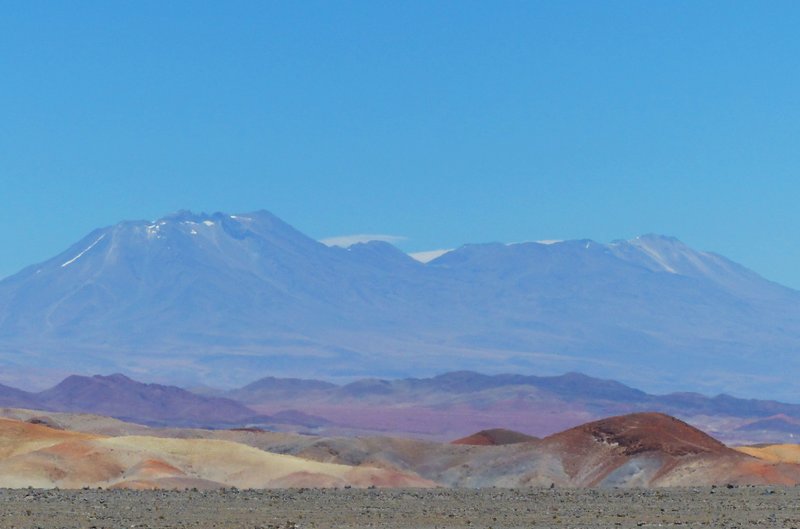 The Tropic of Capricorn marks the southernmost latitude at which the Sun can be directly overhead, which happens on the December solstice – the northern equivalent is of course the Tropic of Cancer. These two imaginary lines define the area of the world on either side of the equator which is considered to be “tropical”. Despite the solidity of this sign the line itself is not fixed as it depends on the tilt of the earth’s axis which fluctuates fractionally each year – the result being that the two Tropics are drifting towards the equator at a rate of about 15 metres per annum. I have no idea if they move the sign accordingly but I suspect not!

We stopped in the small village of Toconao to visit its church, dedicated to San Lucas (Saint Luke). This was built in 1744 in the traditional style of this region and using the traditional material of this village, a white volcanic stone. It is worth going inside the church (if you can – it is not always open although we were lucky) to see the cactus wood ceiling, colourfully dressed figures of saints, and a couple of oil paintings from the Cusco School dating (according to a notice in the church) from the 17th century – one showing Saint Christopher and one the Passion of Christ. 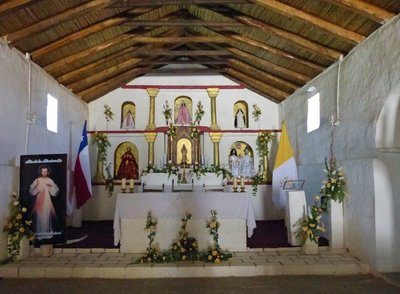 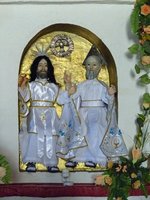 The bell tower, dating from 1750, stands apart from the main church structure. Like the church it has been significantly restored following damage by earthquake and fire. It is built with a mixture of stone and adobe, plastered with a lime stucco. The door of the bell tower, visible in my main photo and photo two, is also of cactus wood, known as tamarugo, and is remarkable for being constructed without any nails, its planks being held together with leather strapping. Both this and the church have been declared National Monuments. 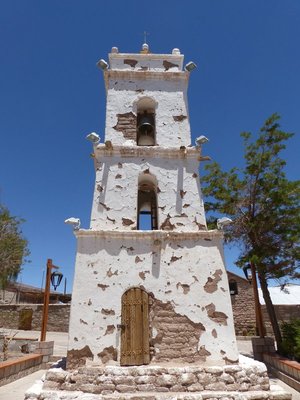 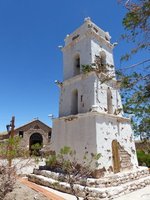 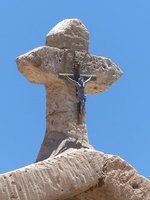 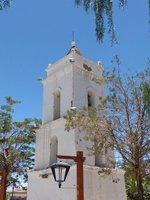 Toconao is best known in the region for the use of volcanic stone in the construction of its buildings, as well as in the crafting of souvenirs (for instance, models of the church’s bell tower). The stone comes from a nearby quarry, and most of the houses in the village are built with it, with some of the older ones having no mortar between the blocks, although today in both new builds and repairs mortar is generally used for speed and strength.

Toconao may strike you as surprisingly green for a desert settlement; it is in fact an oasis. Elsewhere in the village we saw how a river (the Jerez) runs through this dry land and has been channelled by local people to irrigate their fields and provide water for washing. The river flows out of the canyon of the same name which lies to the east of the village – we didn’t have time to visit this unfortunately but even in the village itself the waters of the river have carved a bit of a gorge. 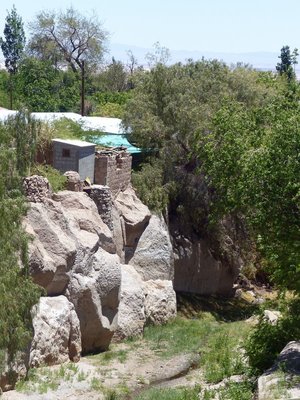 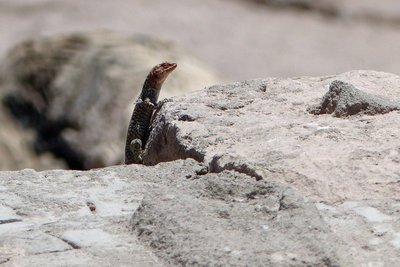 Fifteen metres per year is a much larger drift than I would have thought. I suppose must also drift back again at some point. And I'm sure you're right that they never move that sign, LOL.

I don't know enough about the science Don to know if it ever goes back the other way, but I guess it might! I got it from wikipedia (https://en.wikipedia.org/wiki/Tropic_of_Capricorn) which in turn cites this: http://web.archive.org/web/20110806021244/http://www.homepage.montana.edu/~geol445/hyperglac/time1/milankov.htm

Sarah, thanks for the links. The second one is especially interesting. It is about the "Milankovitch Cycles and Glaciation" and is found on web.archive.org, which is the same site where we can look for older versions of VirtualTourist.

Thanks Albert. I'm starting to get the hang of how best to display photos here - a steep learning curve!

I love this rural architecture so much, especially San Lucas! And .. the little gecko :-)