An anniversary trip to Germany 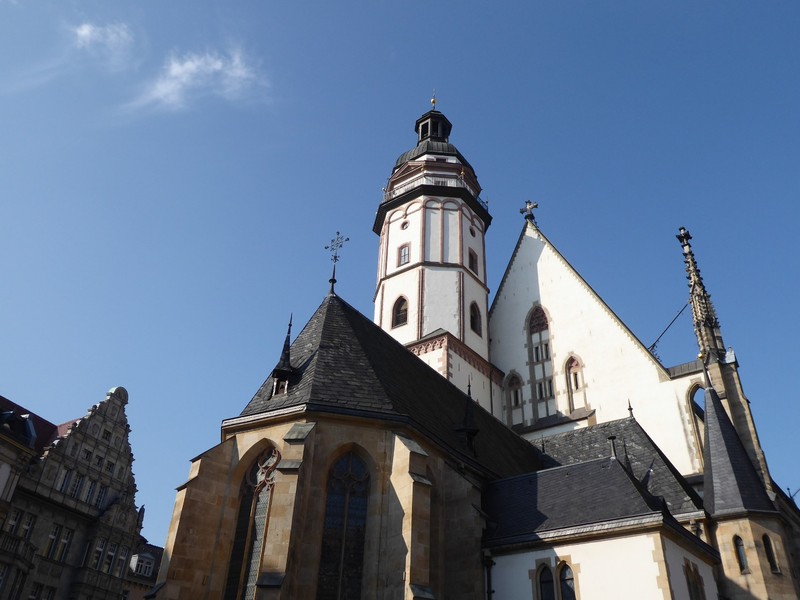 In recent years we have developed the habit of taking a short break to mark our wedding anniversary, usually somewhere in Italy. This year however, Chris proposed Germany as an alternative, being very keen on their food and beer! I was happy to agree (especially as several of our recent trips have been very much my choice) and after tossing around a few alternatives we settled on Leipzig, mainly on the basis that neither of us had ever been there – although later Chris was to realise that he had visited briefly while on a cycling trip with friends some years ago!

Just ten days before this trip I had experienced a trip of a rather different and less enjoyable nature, falling heavily while on a day out at Amble in Northumberland (https://toonsarahnorthumbria.travellerspoint.com/11/), breaking a bone in my elbow and badly bruising my ribs. But I was determined not to let that spoil things, and in fact I had already made good progress towards healing by the time we set off. 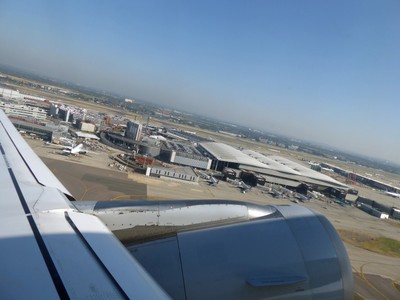 Taking off from Heathrow 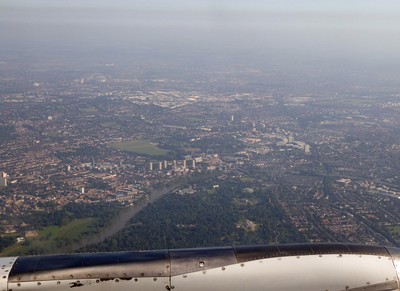 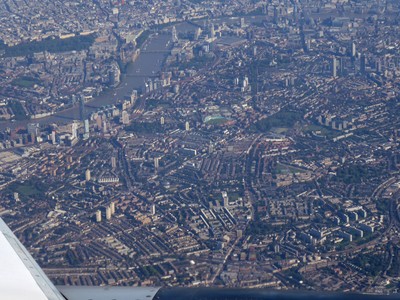 To get to Leipzig we considered two options - fly direct from Heathrow to Berlin, then train via the city centre to Leipzig’s Central Station, or fly to Leipzig Halle with a connection through Frankfurt and then by S-bahn to Markt in the old city centre, just metres from our hotel. We chose the latter and it would have been a good choice were it not for the strong winds that closed one runway at Frankfurt, delaying our take-off from there by around 50 minutes.

But before that we had to get to Frankfurt, and that part of the journey went smoothly - tube from home to Heathrow, quickly through security, time for coffee and a pastry before boarding and a prompt departure. We landed on time at Frankfurt, which was good as we had a relatively tight connection and quite a long journey through the airport. But we made it with time to spare, only to sit in the plane waiting to be cleared for take-off. 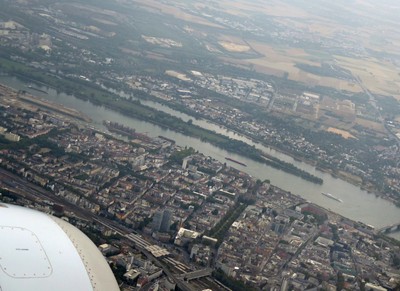 Coming in to land in Frankfurt 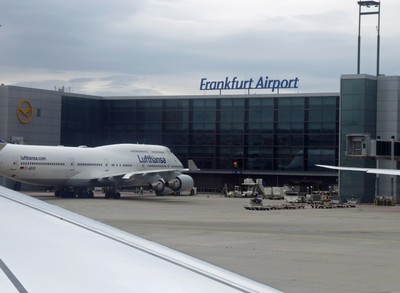 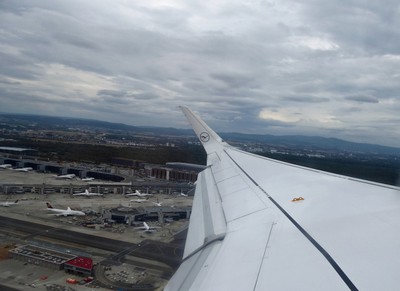 Taking off from Frankfurt - at last! 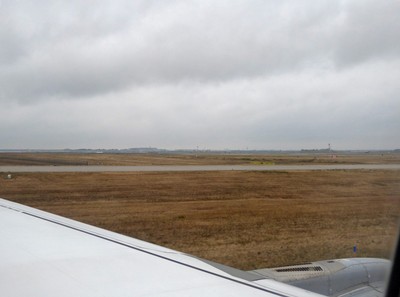 But once in the air the flight went quickly (less than an hour) and we landed in cloudy Leipzig. The forecast had been for rain, so to have only clouds was actually a bonus! The airport is small and was fairly quiet, plus we had no baggage to collect, so we were soon through customs and following signs to the Bahnhof. This proved to be quite a long walk away (so much so that we wondered briefly if we were going the wrong way!) but we got there eventually and bought our tickets from the machines (a reasonable 4.90€). Further confusion ensued when trying to find the right platform. We took an escalator downwards only to discover that this took us only to platform 1, whereas the display boards gave our train’s departure from platform 2. So it was back up the escalator, down a different one to platform 2 - where (fortunately) I spotted a sign indicating that today that train would leave from platform 1! Luckily we had enough time to head back to where we had started, and the train when it came was punctual and quick.

We alighted at Markt, found our way up to the large square dominated by the old town hall (disappointingly under wraps for refurbishment) and walked the short distance to our hotel, the Fregehaus.

Above the entrance to the Hotel Fregehaus

The hotel is in an historic building, which we entered through an archway into the central courtyard. This is shared with a florists’ shop so looked very pretty even on this dull day. We took the lift to reception on the 2nd floor, where we received a friendly welcome and the keys to our room, #3, one floor down on the first. It was a lovely big room, overlooking the courtyard and therefore nice and quiet, and with a modern bathroom with walk-in shower. The style, mixing old and new, really appealed to us.

We were to have a lovely stay here, and the building captured my imagination so much that on returning home I did a bit of research into its history. According to a German-language Wikipedia entry, it started life in 1535 as a Renaissance style house, which was bought in 1705 by a merchant, Gottfried Otto. Otto had the property rebuilt in the Baroque style, in four wings around the rectangular courtyard. 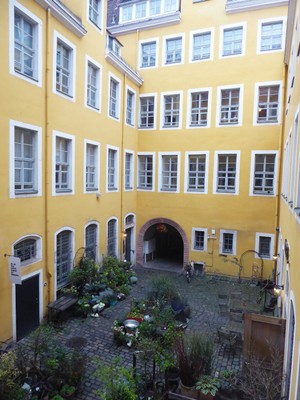 View of the courtyard from our room 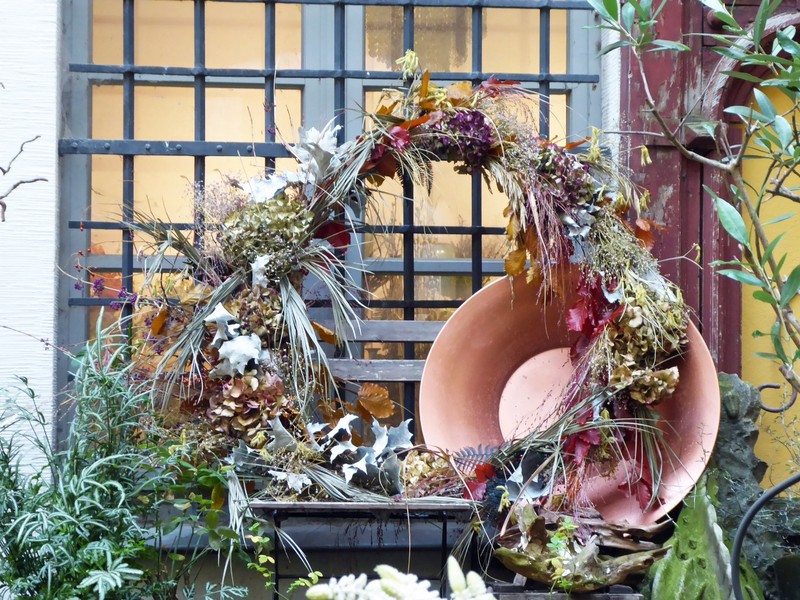 In the courtyard of the Hotel Fregehaus

The entrance to this courtyard from the street is the original Renaissance one, and a few other elements from that era also remain – the vaulting of the entrance archway, a couple of doorways on the ground floor and a stone plaque mounted on a wall of the courtyard which, the Wikipedia caption tells me, is a satirical depiction of the Pope, Kaiser and Martin Luther. 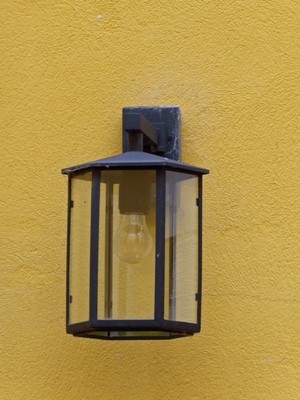 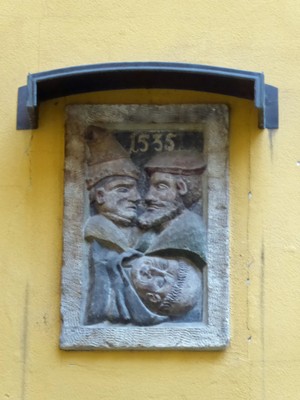 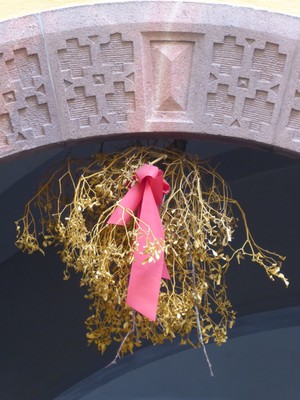 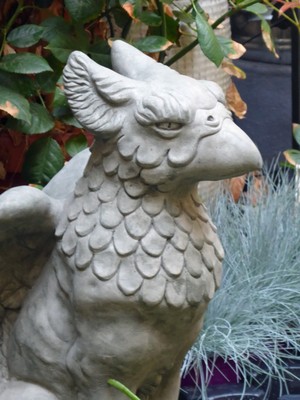 In the courtyard of the Hotel Fregehaus

We unpacked, more or less (my only criticism of the room would be the small amount of storage) and headed back out for a short walk to get our bearings. I took a few photos in that pretty courtyard but otherwise restrained myself, as I knew I would be walking these streets a lot in the next few days and hopefully (judging by the weather forecast) in better weather. I did however stop to photograph this Stolperstein I spotted on the pavement near our hotel – the only one I saw during our stay here, although apparently there are quite a few in the city. 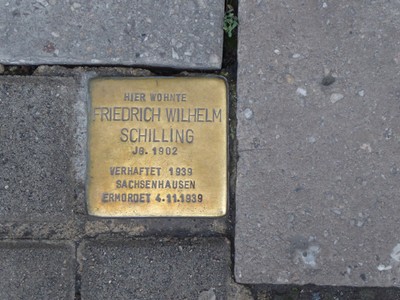 I first came across Stolpersteine (or, literally, ‘stumbling stones’) a few years ago in Berlin. I wrote of them then, on Virtual Tourist,

‘These are by their nature too easy to overlook, but in my opinion that is the last thing you should do, because each one tells of an individual whose life was extinguished during the Holocaust. These Stolpersteine are small brass stones set into the cobbles in front of a number of house entrances in various parts of the city. They are really mini-memorials, each marking the memory of a person who lived at this address prior to the Holocaust and who was killed by the Nazis. Each one says to us: “I lived here, I was a real person not just a statistic, my life mattered to me and to those who loved me – do not forget me”.’

The stones are the work of Cologne sculptor Gunter Demnig, who manages similar projects in more than 50 other cities across Germany. A website, in German, lists all of the stones currently laid in Leipzig (more are planned): http://www.stolpersteine-leipzig.de/. From it I learned that Wilhelm Schilling was a Christian musician, arrested for the distribution of political leaflets or posters against Hitler. The website adds that, ‘He did not have the support of his family, because some family members participated in the National Socialist movement. Thus, the fate of William Schilling became a taboo subject in the family.’ As the Stolperstein says, he died in Sachsenhausen concentration camp on 4 November 1939, aged 37.

After a short stroll around the Marktplatz and a couple of neighbouring streets we stopped for a beer in a café just off the square, Bellini’s – a chance to relax and soak up some atmosphere, and to try for the first time the local pils, Radeberg. Then we went back to the hotel for a short break to freshen up for the evening. 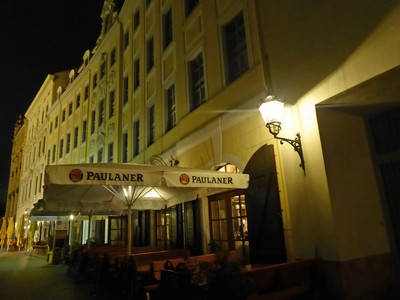 We usually like to eat the local food wherever we travel - not for us pizza in Germany or tapas in Paris, much as we enjoy those when at home (in England of course we eat the cuisines of just about any country!) So it was stretching a point on our first evening in Saxony to eat in a restaurant serving Bavarian style food. But I had spotted on the menu of the Paulaner Hof one of Chris’s all-time favourites, Leberknoedelsuppe. In addition, they had a selection of dishes involving Sauerkraut, another of his favourites. And the restaurant lived up to expectations.

The restaurant is a little tucked away from the livelier buzz of the streets off the Marktplatz, in quiet Klostergasse near the Thomaskirch. It has a cosy atmosphere and on this Sunday evening was about half full. The service was brisk but friendly.

We both had the Leberknoedelsuppe to start with (it was soup weather!). Chris followed this with the Nuremberg sausages served, of course, with Sauerkraut, while I had a delicious Schnitzel topped with mustard, cheese and horseradish, served with little roasted potatoes with bits of bacon and onion. Very filling, but I managed it all - well, it was a long while since our light breakfast at Heathrow! 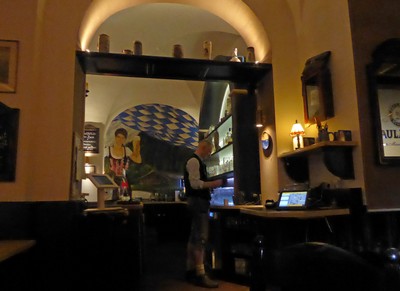 In the Paulaner Hof 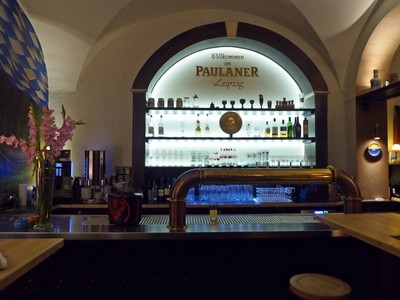 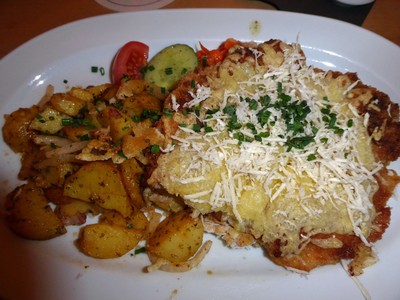 We accompanied the food with a glass each of the Paulaner Pils. We had no room for dessert but asked the waiter to recommend a Magenschnapps, the classic Germans herbal spirits said to be good for the digestion. The best known of these is Jägermeister, of course, but there are others that are better, and his suggestion of Radeberger bitters, which we both adopted, was excellent - a great way to round off our first dinner in Leipzig.

We strolled back to the hotel, glad to have avoided the forecast rain (for now at least) and looking forward to seeing more of the city tomorrow.

We went to Leipzig a few years ago and found it interesting.Hope you enjoyed it.

Loved your photos as usual. I looked closely at those cherubs over the hotel door because I thought the heads and the bodies did not match - the heads were not baby faces.

Have never been to Leipzig so after this great introduction to your wedding anniversary trip here I look forward to reading more about what you saw & did here. Nice photos! By the way, we too always book trips on or around our anniversary in May.

I'll be interested to see what you thought about Leipzig. I spent a day there once, but it wasn't long enough to really pass judgement

I am happy that you enjoyed your trip to Leipzig :-) Oh and so good that Chris could have Leberknödel and Sauerkraut! The hotel looks very good, especially the courtyard. I am sure you found more of these courtyards in Leipzig. I loved to discover them.
Looking forward to reading more :-)

Yes, much more to come! We liked Leipzig and found many attractive old buildings and some interesting history to explore

Rosalie, I see what you mean about the faces but I think that's quite often the case with these old carving of cherubs. And thinking about it, paintings of that period, for example of the baby Jesus, often have very grown-up faces on babies!

I used to go to Leipzig fairly often, mainly on business but also for the opera. But I haven't been back in recent years. Nice to see your photos.

So sorry to hear about your fall. I hope you are mending quickly. Leipzig sounds interesting. I'm fond of Bavarian food too . . .

Thanks Sally. Yes, I'm getting there! We found equally good food most of the other evenings here to

Sarah, thank you for telling us about the Stolpersteine - I don't recall reading about them on VT so new to me. What a great idea. Small but powerful reminders of the barbarity of war.

Thanks for dropping by Albert. Maybe you never read my Berlin page on VT - I did have rather a lot! A shame though, as it was one of my personal favourites