DPRK (and Beijing) Day one 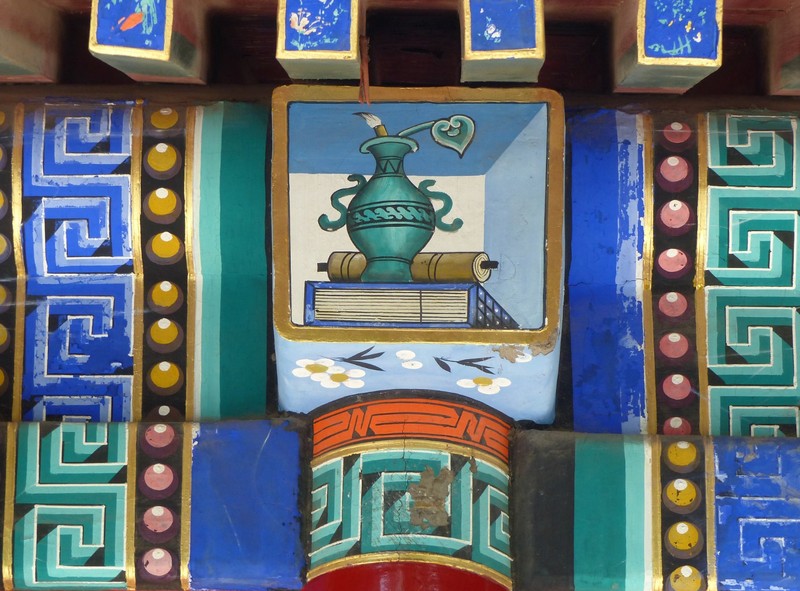 Our tour of DPRK was due to start and finish in Beijing, so we were responsible for getting ourselves to that point. We were strongly advised to plan on at least one night there, to give us some slack in case of delays. We decided to give ourselves more of a cushion so that we could get over any jet lag and tiredness from the long flight. It would also give us a chance to explore a little bit of Beijing and see how much it had changed since we were last there in 1994.

We took an overnight Air China flight from Heathrow. Checking in online the previous day I thought I had secured emergency exit row seats with some extra leg room but disappointingly on boarding we found the layout of the plane completely different from the plan on the website and our seats were standard ones - aisle and middle in a row of three.

The flight was as OK as a long overnight flight in economy ever is. The food was edible for the most part, there was chilled Chinese beer to accompany our dinners, some good films to choose from (I watched Bohemian Rhapsody which we had missed in the cinema) and I even dozed a bit.

We landed on time and were impressed by Beijing’s attractive modern airport. As we were staying only three nights we were eligible for the visa waiver scheme for visitors staying less than 144 hours and transferring through to a destination outside China. Signposting to the relevant area was excellent at first and then disappeared, but we found it at last and after a few abortive attempts (we’d filled in the wrong arrival card, needed to provide evidence of our hotel booking …) we got the requisite stamps in our passports and could exit through border control to pick up our bags. These were only just coming off the conveyor so we hadn’t lost any time over the form filling. 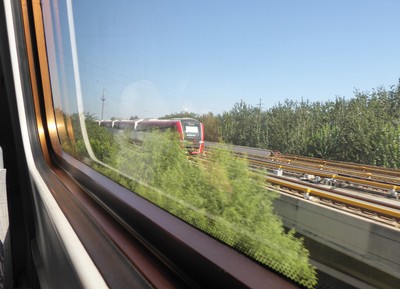 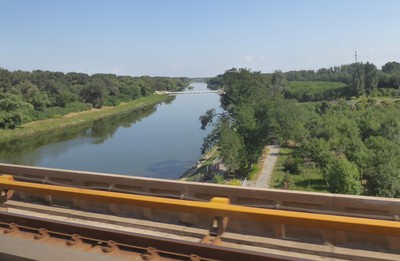 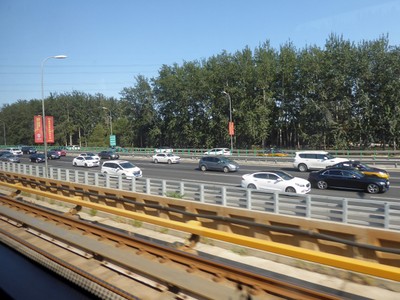 From the Airport Express

To get to the city centre we took the airport express train (costing us 25 Yuan pp) and transferred to the subway, taking line 2 and then line 1 to Wangfujing. The trains were nicely air conditioned, but it was hot work getting our luggage up the flights of steps in the stations - we hadn’t appreciated that there would be no lifts or escalators! 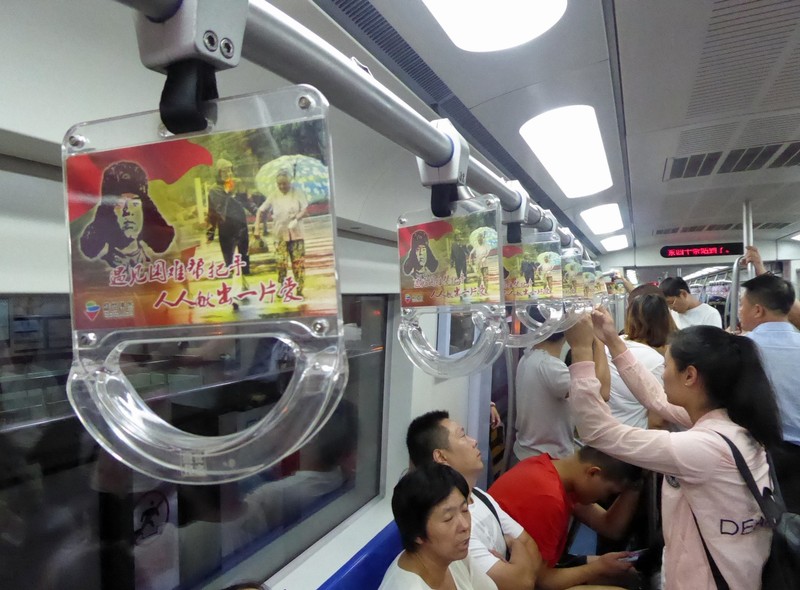 On the Beijing Metro

Arriving at the station we took a guess at the correct exit, got it wrong and spent some time wandering the glitzy Oriental Plaza shopping mall to try to find the hotel entrance. All I knew was that the hotel was above part of the mall. Eventually, after asking two people (luckily I had the hotel name in Chinese on my phone), and trying three exits, we found it! 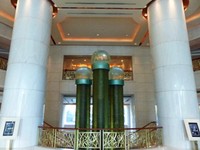 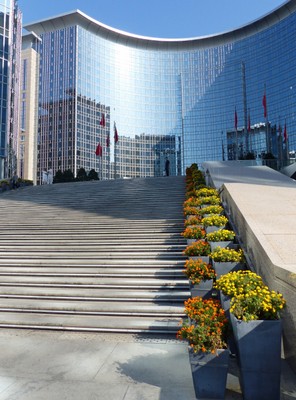 And ‘it’ was a bit of a splurge. We had originally planned to stay in a characterful hotel in one of the hutongs recommended by a friend but decided instead that as the main part of this trip in North Korea would be challenging at times, and many of the hotels somewhat basic, we would treat ourselves to a bit of comfort here In Beijing. So the Grand Hyatt it was, as I found a good deal on Booking.com, and very swish it was too!

By the time we arrived at the hotel we were quite hot and a bit weary, so rather than go back out again for a stroll as we had originally planned, we decided to relax and cool down in our room for a while. 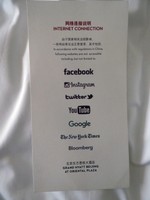 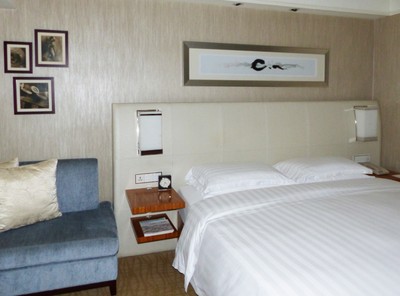 Our room, with good internet access but many sites blocked 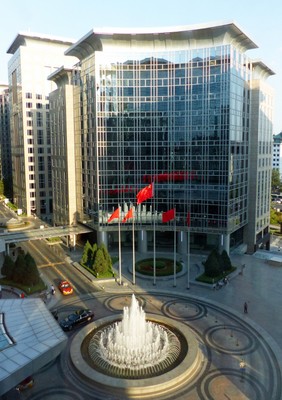 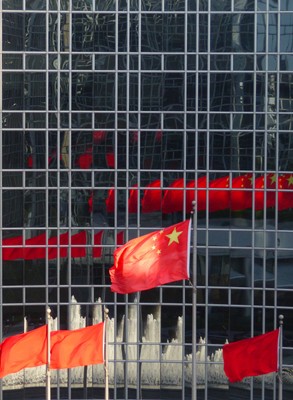 Views from our room

It didn’t seem right to come to Beijing and not sample the famous duck, especially as it’s a favourite dish of ours in Chinese restaurants back home. I knew there were a couple of specialist duck restaurants not far from our hotel on busy Wangfujing Dajie. 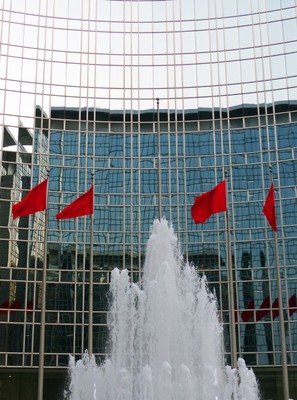 Oriental Plaza building opposite the hotel

We walked there through the glitzy modern tower blocks around the Oriental Plaza complex, dotted with modern art sculptures and fountains. Its sterility reminded me of London’s Canary Wharf when it was newly built. 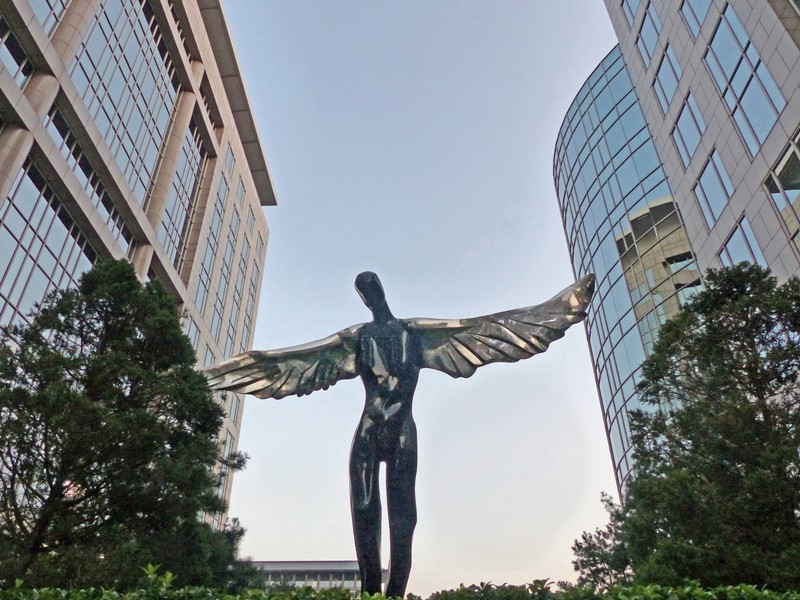 Arriving on Wangfujing Dajie was quite a contrast - neon signs, families and couples out shopping or simply enjoying the buzz … It was anything but sterile, but in its way just as striking a contrast with the Beijing we had visited 25 years ago as the tower blocks had been. 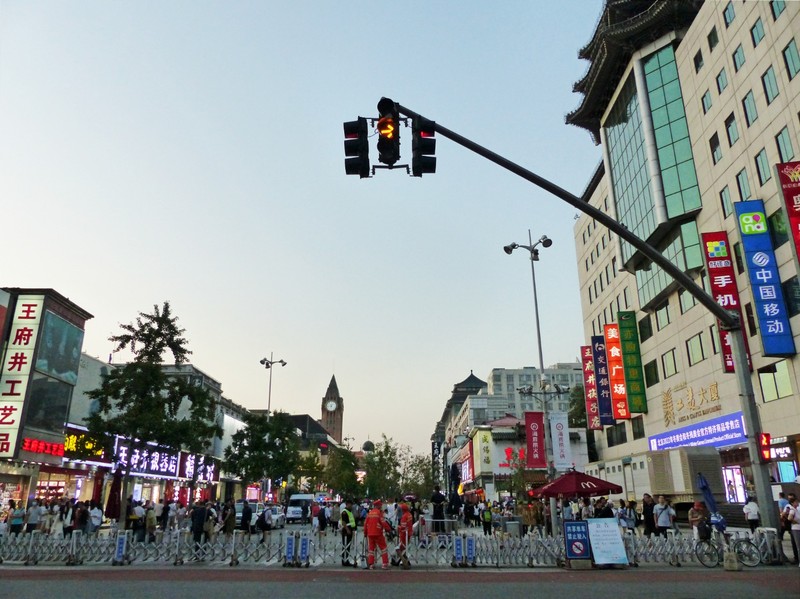 We took a few photos and stopped to taste some free samples of a nutty brittle sweetmeat being handed out at one shop. 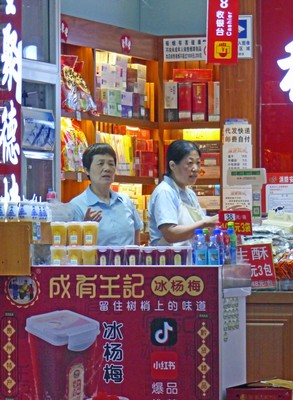 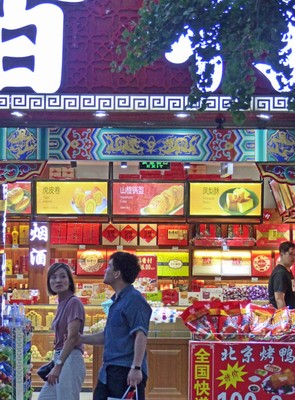 On Wangfujing Dajie at night

When we spotted Quanjude I remembered reading reasonable reviews, so we decided to try it. We were told we would have to wait 30 minutes for a table and decided to do that rather than keep hunting. Just as well, as it turned out our wait was only 10 minutes. 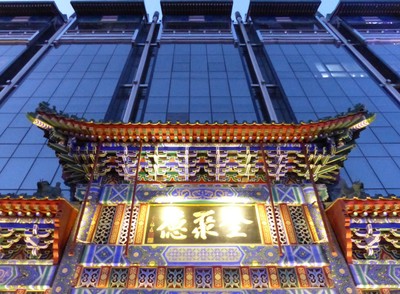 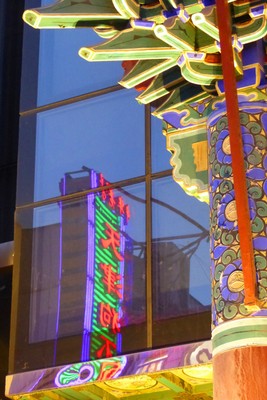 Seated at a large round table at one side of the restaurant we had a good view of proceedings. While other dishes are available it is duck that rules here and most tables seemed to have chosen that, as did we. Although she didn’t speak English our waitress was able to recommend the accompaniments we might like, and we went along with her suggestions. 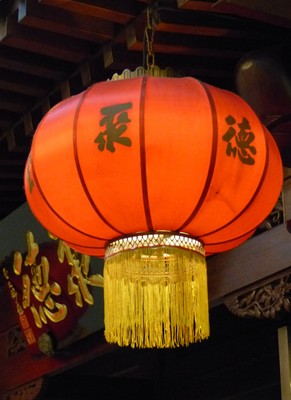 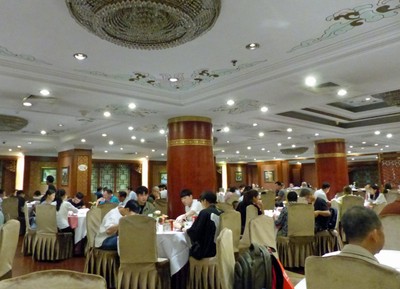 Our beers came quickly but not the duck. We amused ourselves watching the activity around us. The ducks were being brought out on trolleys and carved near the table where they were to be served. At last it was our turn. We were first brought a small plate with just pieces of skin on it which our waitress recommended we ate dipped in the sugar she had brought. This surprised us a little, but we tried it and it sort of worked, although I’d have preferred it if the fat had been more fully rendered.

Next came a platter of duck slices, arranged like a peony on a plate, the restaurant's speciality from what we could gather. Again, the flavour was good but the meat a little fatty. 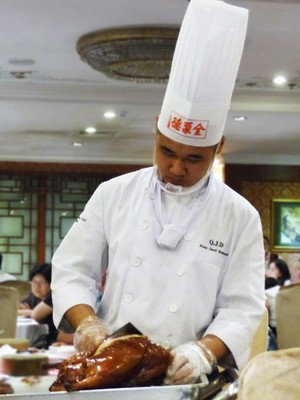 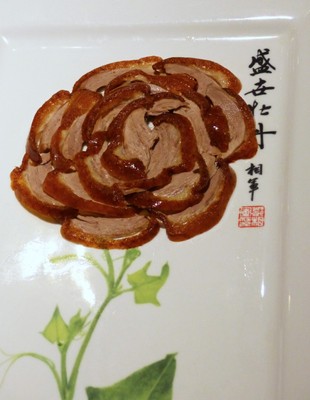 Carving our duck, and the 'peony duck'

By the time all the meat had been carved and delivered, and pancakes, spring onion and other accompaniments (including a watery soup whose flavour and ingredients we were unable to identify!) had also arrived, we found that we had really much more than we could eat. Still we persevered and made a good dent in the spread before tiredness took over and we asked for the bill. Have received much more food than we thought we had ordered we were a little concerned that this would be rather large, but it wasn’t too bad.

We walked back to the hotel, took a few photos of the impressive fountains outside, made a valiant attempt to stay awake until a reasonable time and finally crashed out around 10.00 pm. 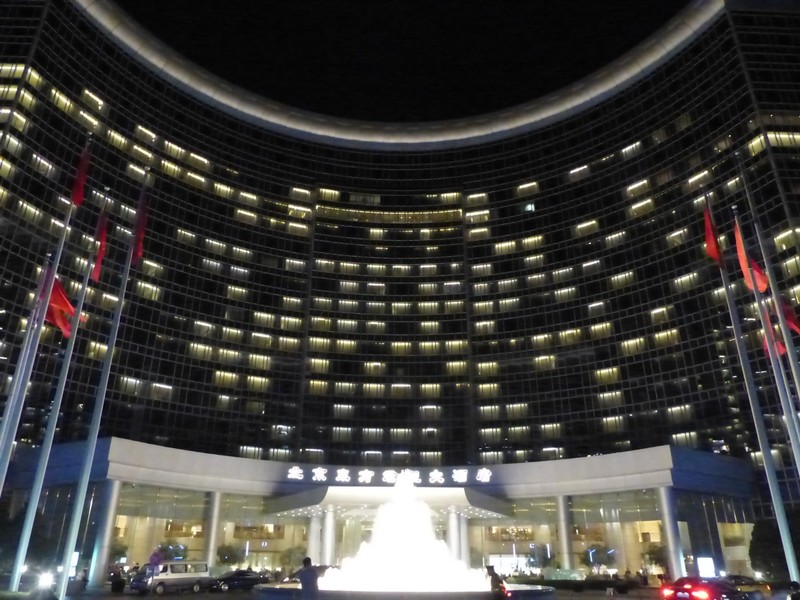 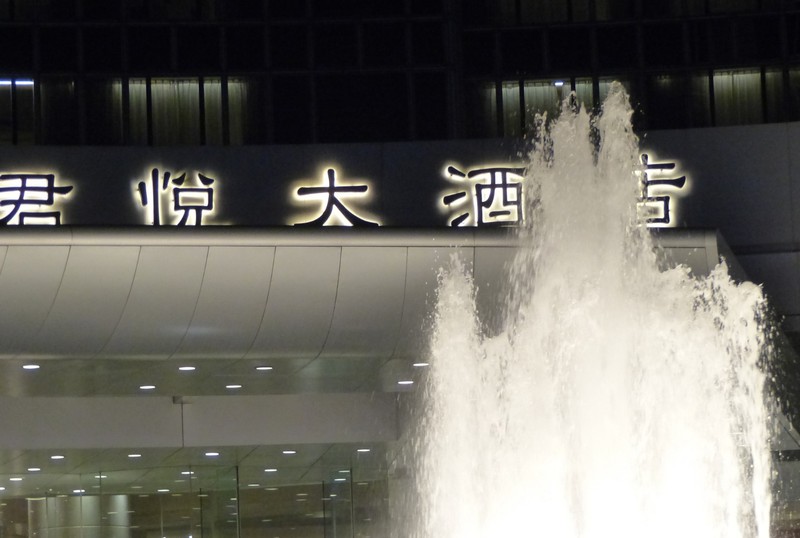 The Grand Hyatt at night

We were here in 2002. We ate in the same Peking duck restaurant as you but in the cheaper fast food section. I found it really tasty. Look forward to the rest of the blog.

Great intro to Beijing Sarah,really enjoyed reading it. Looking forward to reading about the rest of your Asian adventure.

It's good to splurge sometime, I hope that the hotel was what you looked for!

The duck really doesn't look like what I imagined it would.

I agree with you about the airport being very nice. We spent 9 hours there on a layover to go the Bangkok. We had lots of time to check it out complete with all of that time. But it kept us entertained.

A couple of years ago I read a blog of a backpacker who uses a wheelchair. He said his biggest gripe about China was the lack of elevators at train stations (or them being out of order). Seems like the situation hasn't changed

though he did say the station staff were very helpful in getting him up and down stairs.

Irene, I didn't even notice a fast food section at Quanjude but in any case being pretty weary I think we needed the slower pace of the main restaurant.

Henna, yes the hotel was great

And Larry, I have to say we were less impressed with the airport on the way home - land-side it was absolutely heaving with people and rather chaotic, and air-side the refreshment options were a bit limited.

Teoni, you had posted almost the same comment twice so I hope you don't mind that I deleted one? On the way home we found that there was a lift/elevator at the station for the Airport Express but I think it only went from street level to the platforms, not between Express and Metro

Quanjude is a good choice for duck (I love the pancakes). They have a number of branches in the city with the one at Wangfujing being probably the best known. I presume you used Beijing Capital International Airport as the new massive (world's biggest per website) one didnt open till the the end of Sept (Beijing Daxing International Airport) with airlines transferring to it gradually over the next few months.

Hi Albert! Yes, it was the Capital International - I believe that Air China are going to continue to use that, in any case, so I doubt we'd have got to see Daxing even if it had been open.

A couple of years ago I read a blog of a wheel chair bound backpacker who said his biggest gripe about China was the lack of elevators (or the fact they were always out of order if there was any) at train stations. Seems nothing much has changed in that department

. He did say the staff at the stations were really nice and would help him get up and down the stairs.

Sorry duplicate. Having problems with the comments function.

I understand how tired you were. Our trip from SFO to Paris is actually 500 miles longer than London to Beijing. Sometimes we go on to Nice which is even further. Every time we do this, I keep thinking how nice business or first class would be when you could get some sleep. I think the Hyatt was a great idea. Good thinking . . .

I know what you mean Sally - every now and then we think that it would be good to travel business class on these long flights, bur then we look at the cost and think how much more holiday we could have for that money (or even another trip!) and decide to put up with economy

Beijing is still on my wish list but since Chinese is a bit too difficult I just wait till my nieces (half Chinese) are a bit older so that they can be my guides! I am looking forward to the rest of the blog, it looks very interesting ... and I must say the hotel looks awesome ... a good nights rest guaranteed!

We managed OK with no Chinese at all really - signs everywhere are in English too these days, and although it's not widely spoken in cafes etc., everyone has a mobile phone with a translation app! And thank you too for starring my photos - it's much appreciated

Your impressions of Beijing after landing must have been very different from 1994.
As I write this comment I'm wondering why those poor Chinese nationals found it worth the effort to come to London with such tragic results. I don't suppose life is improving for everyone over there.

That duck is a work of art, talk about presentation.

Hi Fergy - yes, it certainly surprised us when we saw the plate!