To touch the sky 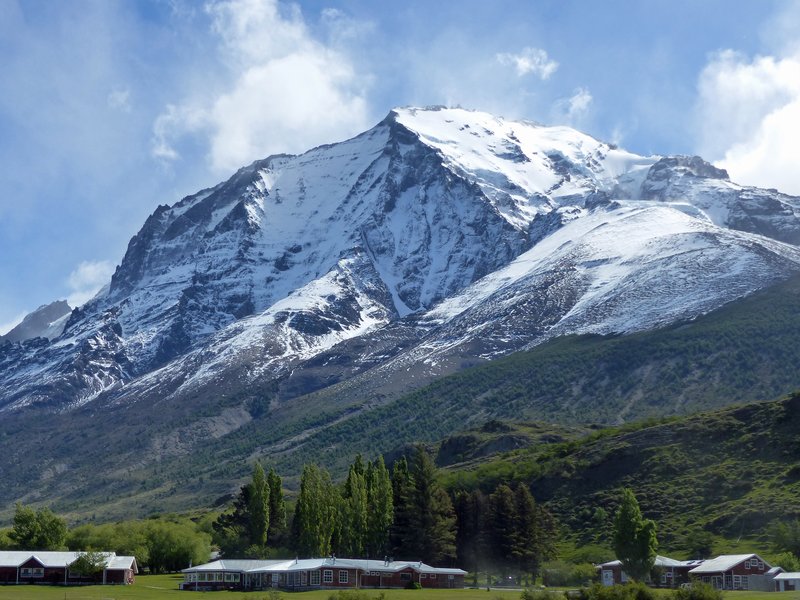 As a lover of mountain scenery, I have long wished to visit the high Andes of Patagonia, and specifically the Torres del Paine National Park.
This is named for the three distinctive peaks at its heart, the Torres or Towers, but these are just a few of the majestic mountains contained within its boundaries (and of course, many others just outside). Add numerous lakes, glaciers and rivers, and this is a landscape to tug at the heart strings and demand attention.

It is hard to do it justice, either in words or in photos, but I will do my best over the next few entries as I describe our visit here.

Getting to the national park 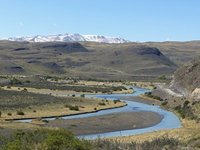 We travelled to the National Park, as many people do, via Puerto Natales (some also arrive from El Calafate in Argentina). Typically lodges arrange transfers with an element of sightseeing built-in, of but as most the included stops seemed to duplicate much that we would see on the following days’ tours, we decided instead to treat ourselves to a private transfer by car. We had assumed this would allow us to stop off for photos along the route, but as it turned out, our driver (who spoke no English) definitely only saw it as his job to get us from A to B, and as I was able to get some decent shots from the car I settled for those – although we did stop once, at the Laguna Amarga park entrance, to pay our fee and register (as all park visitors must do).

The drive from Puerto Natales to our accommodation at the Hotel Las Torres took about two hours, including the ten minutes or so at the entrance station. The scenery was stunning throughout, but especially in the latter stages of the drive, with great views of the Paine Massif, including the Torres themselves. After a few days of rather dismal weather in Chile’s Lake District it was a huge relief to see blue skies here. And when finally we got our first glimpse of the Torres, I was delighted to realise that, even if the clouds descended again, at least we had seen them. Little did I know then that they would be visible, more or less, for the whole of our two night stay here. 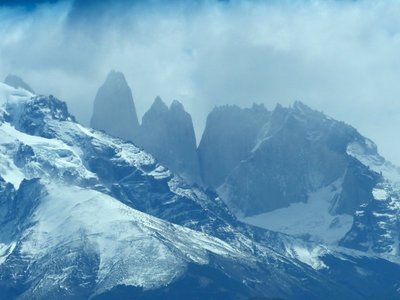 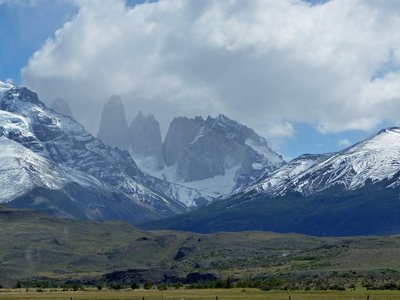 Taken on the road

The Las Torres started life in 1979 as an estancia or cattle ranch, founded by the son of Croatian immigrants. In the early 1990s the owner decided to build a few rooms and a restaurant in order to attract some of the tourists who were starting to discover the Torres del Paine in ever-greater numbers. The few rooms have grown over the years into what is now a large and rather sprawling hotel which still retains something of the spirit of a working ranch with stables – horse rides are offered and it’s lovely to see the horses brought in from the grazing areas early each morning. The location is one of the best in the park, being the closest to the famous Las Torres peaks of any hotel. Actually, technically it isn’t in the park, as it stands on private land, but it is centrally located within it.

As the hotel has grown over time, different blocks of rooms have been added, linked by short outdoor walkways (be prepared to feel the cold when going to and from breakfast, dinner etc.) We had a room in one of the newer blocks, Cipres, which was quite a long way from the central area with its lobby and bar – further to walk but much quieter. We were on the south side with the less good views, i.e. not looking directly at the nearby mountains, but there were some distant ones to enjoy. 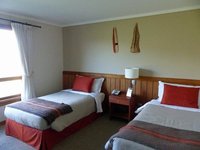 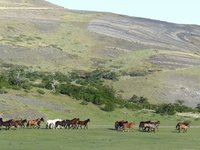 Our room, view from the room, and crab salad in the restaurant 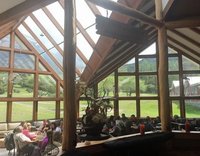 For dinner here we had a choice of informal eating in the bar and a formal three course set price dinner in the restaurant. Prices for both are higher than we found elsewhere in Chile, though not bad when compared to London, and the remote location makes the pricing understandable. On our first evening we opted for the restaurant. The choice of dishes for each course was good, with locally sourced fish and meat, and vegetables grown in their own organic garden. The only option here is a three course set menu (included in all-inclusive stays) so it's not the best value if you're not very hungry = although with all this fresh mountain air ...!

On our second evening we ate in the bar, a more casual setting and menu, and enjoyed a meal of local bread with shredded beef, bacon, cheese and tomato served with herby chips - a sort of local variation on a hamburger and very tasty. 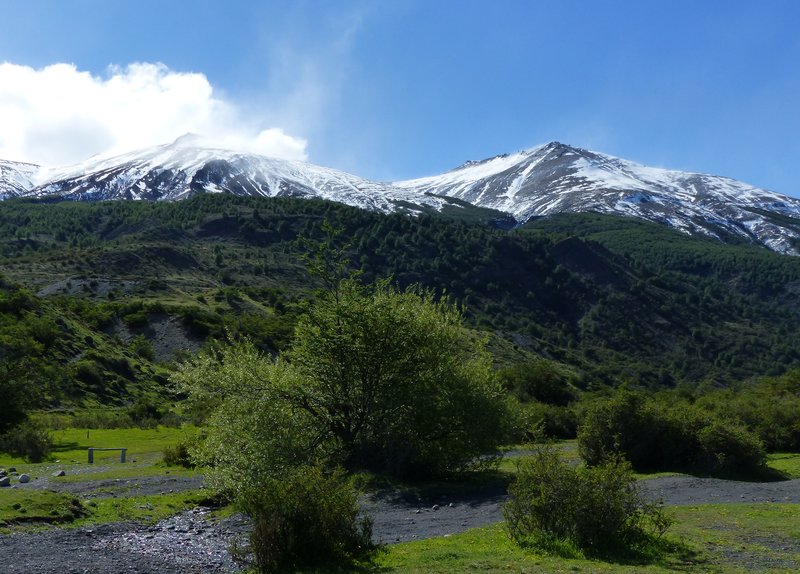 Scenery near the hotel

The hotel has a comprehensive choice of excursions, both full and half-day, and catering to various levels of fitness – hiking, riding or touring by bus (although note that even the latter necessitate some walking if you’re to get the most out of them, as my later entries will show). If not pre-booked (ours were, and this is advisable if you are keen on a specific one as they can fill up) you can meet with the guides each evening to discuss options for the next day. The system manages to be both organised (set time and place, plenty of helpful information) and chaotic (not enough guides to deal with everyone at once, so you may wait some time before being able to discuss and finalise plans for the next day) – we were glad to have pre-booked as our time here was too limited to risk missing out on our top choices. 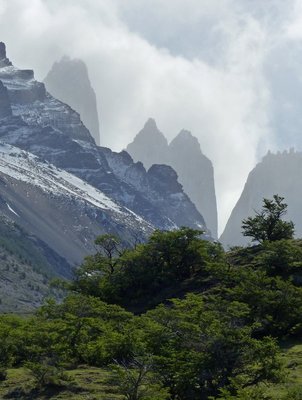 Over the next few entries in this blog I will describe the tours we took and the sights we saw. We packed a huge amount into the day and a half we were here. What we didn’t do however, was hike. While many visitors are drawn here for the trekking possibilities, including the famous “W” (so-named for the rough shape of the route), I have never been a long-distance walker and today various health problems (in particular, some rather dodgy knees) make that impossible. But if you are in the same position and are wondering, as I did, if the Torres del Paine are for you, I would say – go! As long as you can manage to walk a few kilometres you will certainly see the park’s amazing landscapes even if, like me, you are unable to fully escape its crowds. But the mountains are giants and we are dwarfed by them, so truly the crowds are very easy to ignore (and in any case are not on the scale of, say, Yosemite or Yellowstone).

If as I do you love mountains …
If you are drawn to wild places and the grandeur of nature ...
If you enjoy landscape photography …
If you are interested in how the forces of nature have shaped our planet …

Come to Patagonia and to the Torres del Paine!