Getting that iconic shot

Farewell to the Torres del Paine 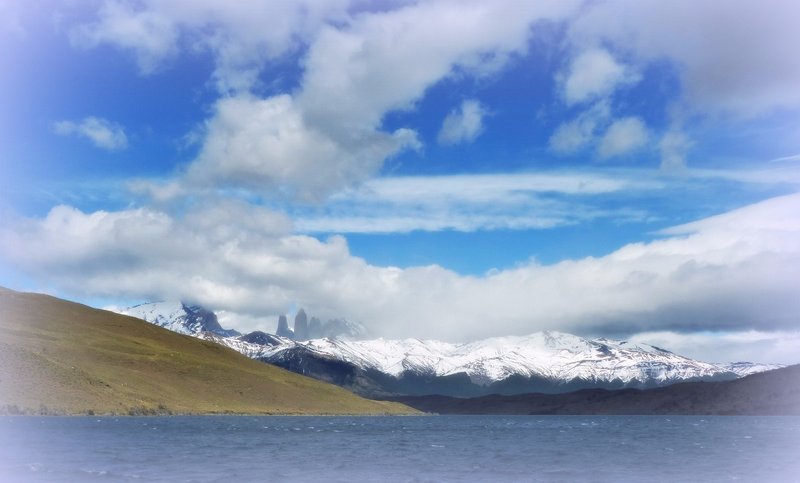 As the Hotel Las Torres offers both full and half day trips we were able to fit one of the latter into the morning of our departure day, taking the tour to two of the park’s most scenic lakes – Amarga and Azul. At the start of our drive we passed close to the Rio Paine where we stopped briefly for photos as a couple of guanaco were crossing the river here.

Then it was on to our first “official stop” at a viewpoint overlooking Laguna Amarga.

This is one of the smaller lakes in the park and the first that many visitors see, as it is located close to the National Park entrance station of the same name. It is well known as a spot to see flamingos although there were disappointingly few on the day we visited – and those that were there were at too great a distance for photos. Thankfully we had got fantastic flamingo shots at the Salar de Atacama so were only mildly disappointed at this, and there were other sights to enjoy here, including another native bird, a rhea. The rheas found here are of the species known as the Lesser or Darwin’s Rhea, and was recognised as a new species by the famous naturalist while he was in the middle of eating one!

Anyway, back to the lake itself. We stopped at the viewpoint at its eastern end, from where you can get wonderful shots of the lake with the Torres del Paine as backdrop. As on the previous day we were blessed with bright weather and the towers were fully visible. It was however again very windy (Patagonia is always windy) which presented a few challenges for photography as the wind whipped my hair in front of my face. It also meant that we couldn’t get any shots of the Torres reflected in the waters of the lake such as I have seen posted elsewhere. But it was still a very scenic spot in which to stop and definitely worthwhile. 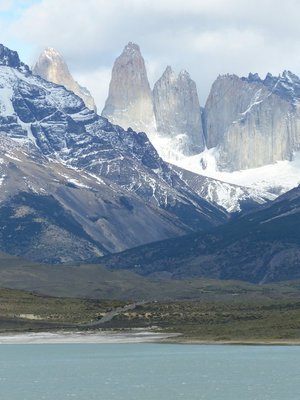 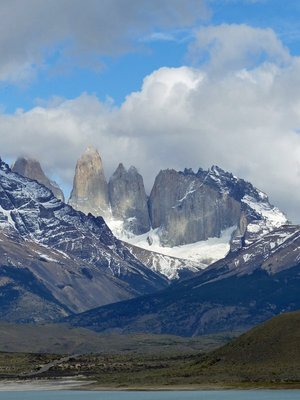 We spent most of the morning however on the shores of Laguna Azul, which lies a little to the north. Again reflections were in short supply because of the wind, but in every other respect this was a beautiful spot, with the deep blue lake the foreground to a classic view of the Torres, which from here you can see lined up in a row rather than overlapping each other as from most other viewpoints. 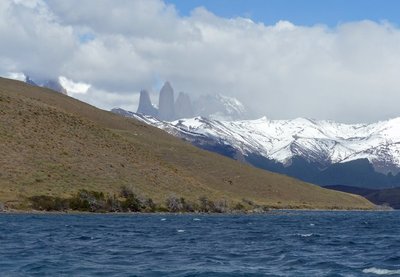 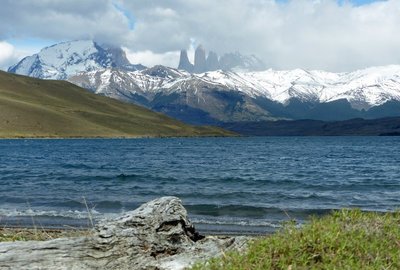 We took a walk along the stony beach at its eastern end, from where the best views can be had. The wind was strong but nothing like as much so as it had been the previous day at Lago Grey, and I really enjoyed this walk. We stopped often for photos and when we reached the far (northern) end of the beach we were rewarded with the sight of a small herd of guanacos – the largest group we had so far seen on our travel (or indeed were to see). Our guide from the hotel heard what he was sure were two guanacos fighting and we hurried towards the spot, arriving just in time to see, although not photograph, the last stages of the fight before one of the ‘ladies’ ran off. Clearly they had been fighting over a male and equally clearly the one that remained had won!

As we walked along the road back to our small bus we were able to get even closer to these beautiful animals and capture what I consider to be an iconic Torres del Paine shot, with guanacos in the foreground and behind them the blue waters of the lake and the Torres and Paine Massif beyond. 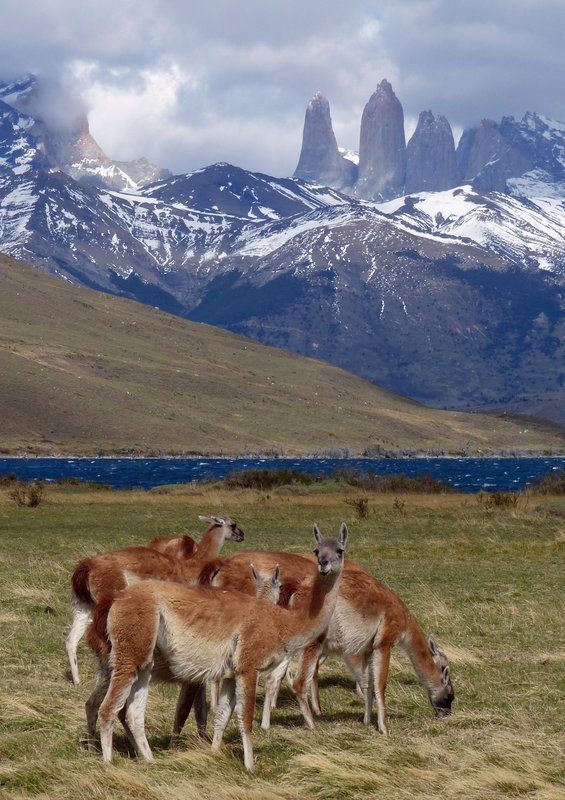 On a more prosaic note, it’s worth knowing that there are toilets at the parking area here but not at the far end of the beach. You know what you have to do!

The guanaco is one of four camelids native to South America and the third that we had seen on this trip (having encountered domesticated alpaca at the Emiliana Vineyards in the Casablanca Valley and wild vicuña in the Atacama Desert). They live in herds like this with females, their young, and a single dominant male. Our guide pointed out that wherever you see a herd there will be one on the hill above, standing sentinel to watch for puma. Despite this you will see many guanaco skeletons in the park, picked clean by the condors after the puma has eaten his fill. We would all have loved to have seen a puma, naturally, and the guide did his best to spot one, but they proved elusive. Still, the guanaco shots made up for that to a large extent. 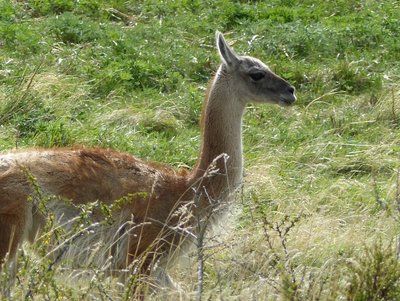 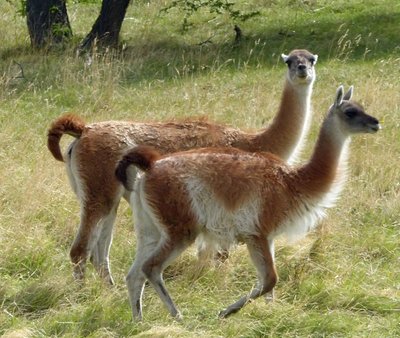 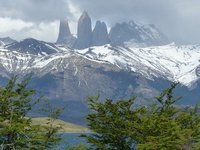 It was at Laguna Azul that we learned about the dangers of fire in the national park. In February 2005, a Czech visitor started a fire here when his camp stove (something that is forbidden in the open areas of the park) fell over. The fire burned for about ten days, destroying 155 square kilometres (60 square miles) of the park, including a large tract of native forest. The Czech government offered aid after the fire and donated US$ 1 million to the reforestation of this area. Please don’t be the next idiot to cause such a catastrophe. Follow the park rules, don’t use open fires anywhere, and only use portable stoves in designated camping areas. And if you must smoke, carry out all cigarette butts with the rest of your rubbish.

Our last stop on this half-day tour was at the Cascada del Rio Paine another beautiful spot. While not very high, the force of the water here, and the backdrop of the Paine Massif with the Torres peeking up in the background, make it well worth a visit. A bumpy track leads from the road up to Laguna Azul to a parking area from where it is a short walk to several viewpoints overlooking the falls. It’s worth walking along from one to another as the views change as you do so. 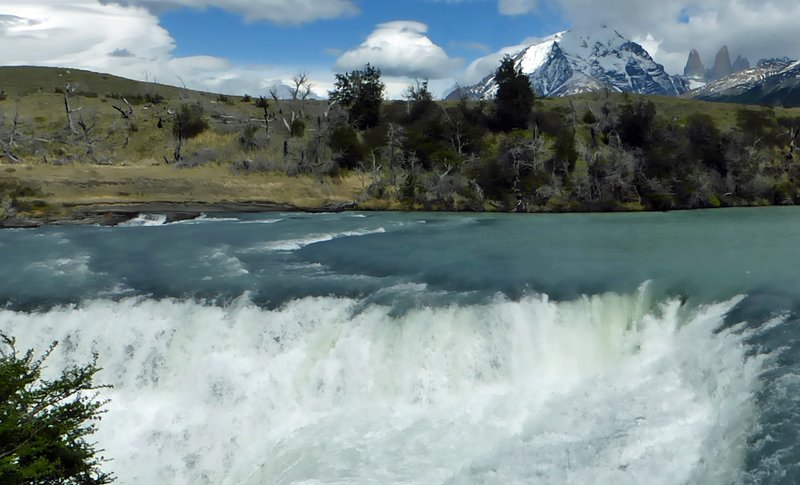 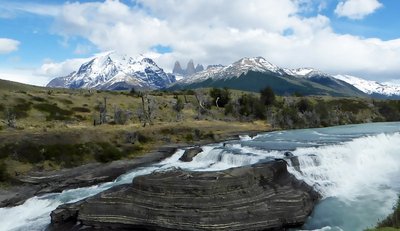 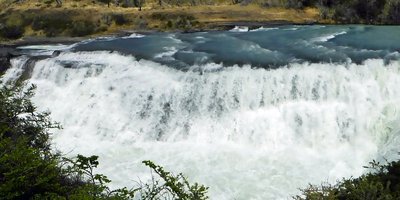 These falls are not so much visited as the Salto Grande and our small group had this spot to ourselves (as we had the Laguna Azul). And yet in some ways the setting is prettier and the fact that it is a shorter walk (albeit stony – I wouldn’t fancy getting a wheelchair or pushchair/stroller along here) makes it more accessible for anyone who would find the kilometre walk to the Salto Grande too much of a challenge.

We got back to the hotel in time to have lunch in the bar, but then it was time to say goodbye to the Torres del Paine.

On our return journey we took the public bus from the Laguna Amarga gate, having been dropped off there by a driver from the hotel. Our bus was operated by Gomez, although several other companies serve the same route - make sure if you’re pre-booked that you board the correct bus.

We left the gate at 14.30 and arrived at the bus terminal in Puerto Natales around 16.00. Here we took another bus, this time operated by Fernandez, leaving Puerto Natales at 17.00 and arriving in Punta Arenas at 20.00. We were impressed by the service of Fernandez who were happy to give us tickets for that bus even though our booking was for the 18.00 – we didn’t especially fancy two hours in the bus station when we could be getting to Punta Arenas in good time for dinner!

Lovely photos of the beautiful scenery. How lucky were you seeing all that wildlife!