The navel of the earth

One of the main reasons we had come to Chile was to combine time on the mainland, visiting the Atacama Desert and Torres del Paine, with a trip to Easter Island – more properly known as Rapa Nui. 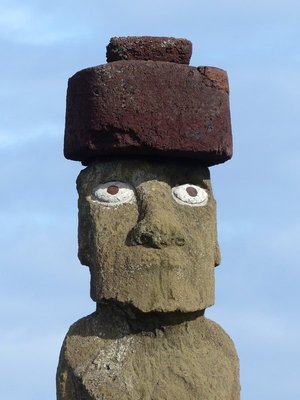 There are few places in the world more remote, more mysterious or more alluring than this little triangular island far out in the Pacific Ocean. Over 2,000 kilometres from the nearest inhabited land (Pitcairn Island) and over 3,500 from the nearest mainland (Chile), it is perhaps little wonder that this is a land of unique half-forgotten cultures.

If you know anything about Rapa Nui, it is likely to be that its people once constructed the giant moai – monolithic stone statues set in groups around the island, enigmatic in their expression and barely understood in their purpose. It was images of these that first drew me here.

But there is more to the island culture than the moai, wonderful though they are. After the moai cult came that of the Birdman, a little better understood (because more recent) but no less intriguing.

We spent just three nights on the island – a fairly typical stay and long enough to see the main sights, although I left wishing that we had allocated at least one extra day to do some independent touring in addition to the three excellent guided tours that we took.

In this, and in my next couple of entries, I will describe the main sites that we visited and the many vivid impressions I brought away with me.

We flew to Rapa Nui with Latam from Santiago, which is pretty much your only option for reaching the island. The flight takes about five and a half hours, but with a -2 hours time difference our 9.35 flight landed around 13.00. The plane was a very new Boeing 787 Dreamliner and it was a very comfortable flight with good catering and service.

We landed on the surprisingly long runway of Hanga Roa's Mataveri International Airport (considered the most remote airport in the world). The length of the runway is explained by the airport's designation in the 1980s as a landing site to be used if a Space Shuttle flight had to be aborted, but it also enables much larger planes to land than would otherwise be the case, of course bringing more tourists. 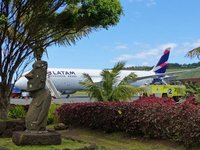 We had a long wait for our bags as this flight is the main link with the mainland for the islanders and many of them had brought a lot of baggage - boxes, crates and very large cases. But eventually ours appeared on the conveyor belt and we were able to exit the airport to be welcomed with flower leis - we had arrived in Polynesia.

We spent a comfortable few nights at the Puku Vai hotel, a mid-range locally run hotel on the edge of town, right by the airport. The latter isn't a problem as there is only one flight a day, and the hotel is for the most part quiet and restful. It is, however, a little further from town than I had been led to believe (about a 25-30 minute walk), and we would have preferred to be a little closer. That said, taxis are cheap and easy to order from the reception here if needed.

The accommodation is in bungalows which are arranged around the garden and pool. The grounds are nicely planted with flowering shrubs and the pool is a good size with loungers around it. All the bungalows have patio doors opening on to this area and the pool offered a welcome opportunity to cool off after a day’s sightseeing, although we weren’t here long enough to take full advantage of this relaxing spot. 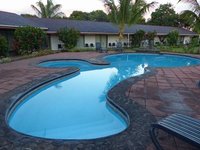 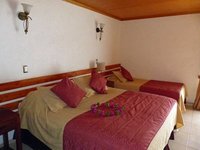 The rain that had been falling when we landed cleared while we checked in, so as soon as we could we set out on the walk into town to explore and get our bearings. It was further than we’d thought, as I said, but a pleasant walk, passing the catholic church (more on that in a later blog) and some colourfully painted buildings. 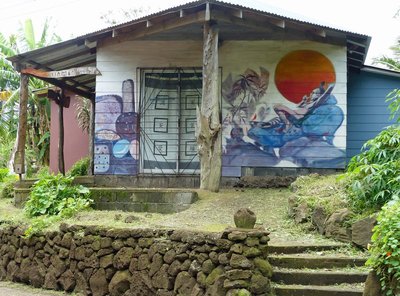 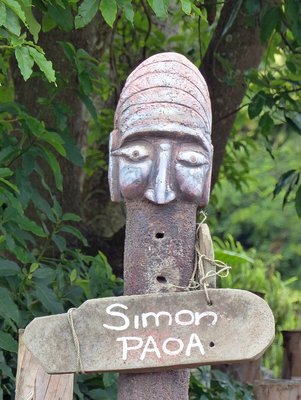 On the walk into town

We found our way to the harbour where we got our first “sighting” of moai – right in the centre of town! I will say much more about the moai and ahu of Rapu Nui in my next entry, but I should mention here that the ahu is the stone platform on which the figures stand, and the moai are the figures themselves.

If like us you have just landed and can’t wait to get a look at one of the island’s most famous sights, this is as good a place as any to start. This is Ahu Tautira (confusingly marked as Hotake on the town’s signs but named as Tautira in guidebooks). The two moai here stand with their backs to the sea, as do almost all on the island, overlooking the town’s football pitch like eerie spectators from another age. The one on the right is in much better condition than that on the left. 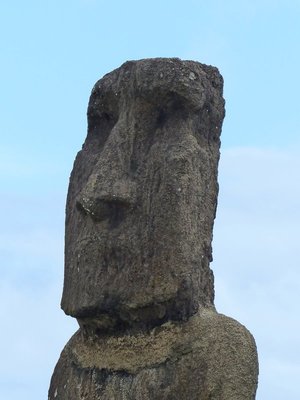 Near the wharf where the small fishermen’s boats moor (built, by the way, with stones from the ahu) is a solitary moai, placed to look out to sea along the jetty. I didn’t get good photos of this one at the time, as the light was all wrong, so the photo below was taken later in our stay when we came into town for dinner. 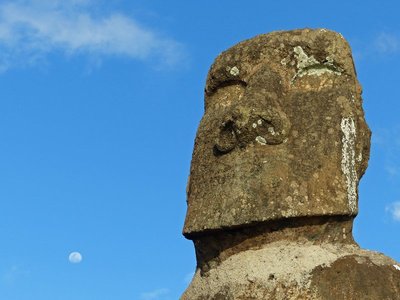 You will surely see much more impressive moai complexes during your stay, but nothing can quite match this first sighting for impact. However many photos you have seen, nothing quite prepares you for their haunting qualities, which will remain with you long after you have left the island. And it may well be here that you realise for the first time just how different each moai is from another, and what individual characters they have.

We also spent some time on the wharf itself, watching the surfers and enjoying an ice cream from one of several small cafés here. 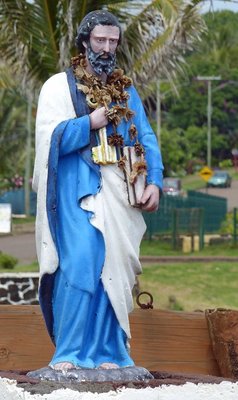 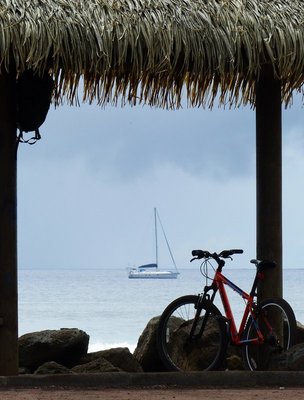 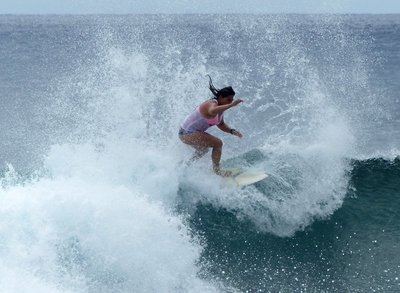 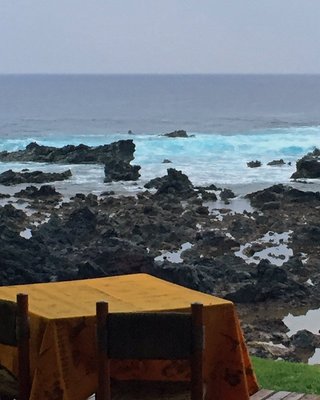 View from our table

On our first evening in Hanga Roa we ate at Tataku Vave, a cliff-top restaurant on the edge of town, quite near the airport. It is well known on the island for two things - its seafood and the great views from its terrace of the Pacific waves crashing on the rocks below. Unfortunately when we came we were only able to enjoy the first of these as the weather was too bad for us to want to sit on the terrace and the view was partly obscured by driving rain. But despite this we had a good dinner and enjoyed the restaurant, while not thinking that some of the dishes we ate quite lived up to the reputation. 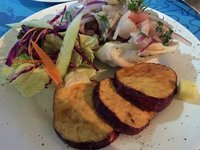 The rain was still falling as we made our way back to the hotel (by taxi) and we wondered what weather the next day would bring, as we were to start our explorations of this magical island. Luckily, we need not have worried, as the skies would clear overnight and we would have a wonderful couple of days here.

Fascinating to read about Rapa Nui, a place I know very little about.

Thank you Don. You will probably have read far more than you ever wanted to if you continue to follow my blog as I have barely scratched the surface here compared with what we were to see over the next few days!

The island truly has some invisible force - I think it is called MANA....also funny you saw some travelers jumping there, haha

Hi Norman, and thanks for stopping by. Yes, it was funny to see another jumping family here!

See you enjoyed your Rapa Nui trip as we did doem years ago,.

Fascinating read Sarah. One of my dream destinations ever since I saw the movie 'Rapa Nui', but we haven't managed to get there yet.

Thanks Jessika - really worth the effort (and cost) to get there if you do get the chance. This first day we barely saw anything compared with what was to follow on the next two - and thankfully better weather too!