Of moai and more 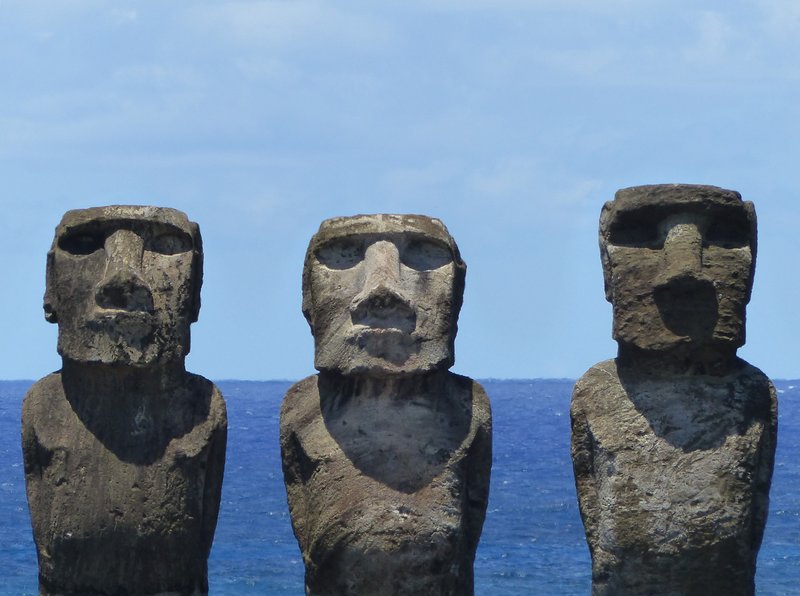 On our second full day on Rapa Nui we took a whole day tour which concentrated on the main sights on the south-east and north coasts, including several of the major ahu sites, the moai quarry on Rano Raraku and the beach at Anakena. By the end of the day we felt we had a pretty good high-level understanding of the island’s ancient cultures, especially the moai, and had seen all the top highlights, while knowing that there was so much more we could have seen had time permitted.

Our morning drive followed the beautiful south coast of the island, with great views as we travelled and several stops at fascinating sites in very picturesque settings. Our first was at Vaihu, the site of Ahu Hanga Te’e, a platform which once held eight moai. These now lie face down in the same position they were left in when they were knocked down with their pukao scattered around. Their pukao, being cylindrical, rolled away when the moai fell and are scattered around (some were even recovered from the sea). 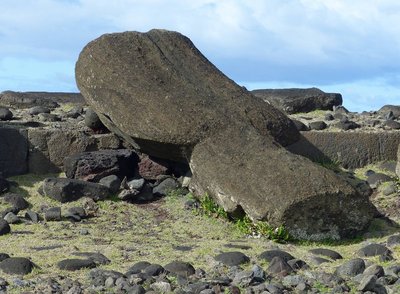 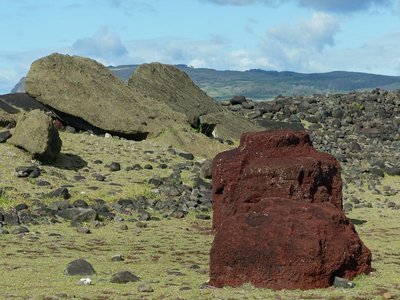 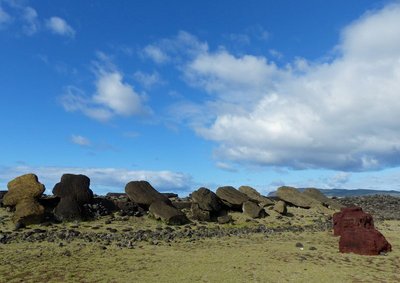 We made a longer stop at Akahanga, where the beautiful coastal scenery was as much a draw for me as the archaeology. The ahu here hasn’t been restored so you can see how things would have looked to the first Europeans who arrived on the island. At one time, it would have had about a dozen moai of different sizes, ranging between five to seven metres high. Unusually , here the moai have been toppled in two directions – some forwards, as is normal, but some backwards, possibly sent flying in a domino effect when their neighbours were pushed over.

This is also the site of extensive village remains, with the foundations of boat-shaped houses, known as hare paenga (“Houseboats”) clearly visible. Nearby is a small cave which would also once have been used for shelter. Our guide told us how his own grandmother once lived in such a cave in the days when the island was really isolated and desolate, before tourism had revived its fortunes. Growing crops was a challenge, there were only one or two ships bringing supplies each year – life was very tough. 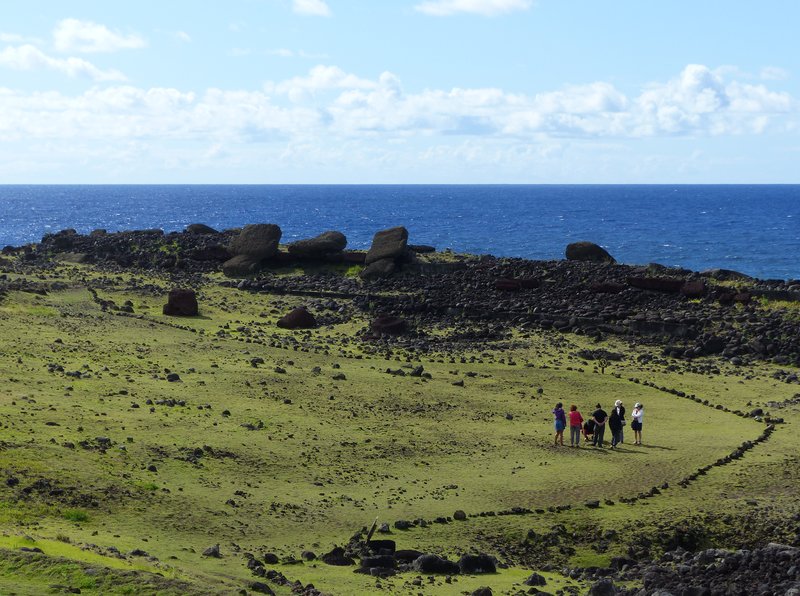 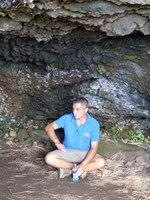 In the village remains and the cave 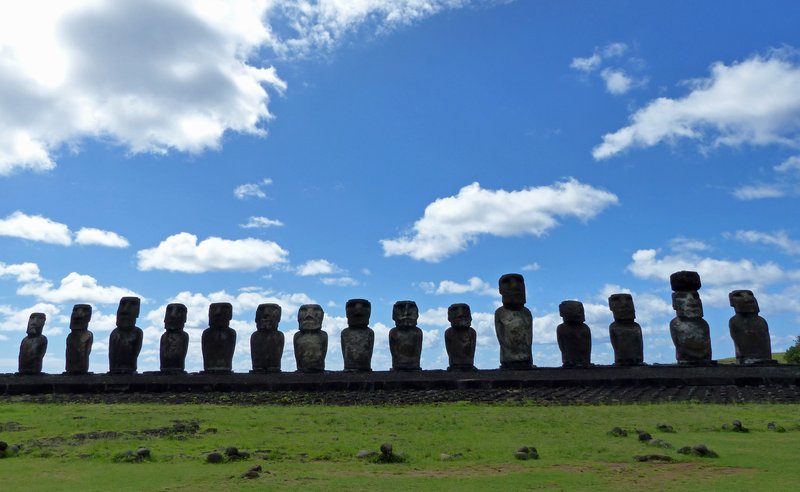 From there it was on to Tongariki, one of the must-see sights on Rapa Nui. This is the largest ahu ever built – 220 metres long, and with 15 moai. It was restored in the 1990s after a tsunami had caused further damage to the already toppled moai. It is perhaps here more than at any other ahu that you can appreciate the physical differences between the moai, clear evidence that each was carved to represent a separate individual ancestor. Some are taller and some short; some rather pot-bellied, others slimmer; some have snub noses, others more pointed; and so on. Only one still has his pukao or topknot, but a number of others are scattered around the site – these were considered too damaged to safely replace without causing further irreparable damage. Their distribution gives you a sense of how far inland the waves of the tsunami carried these massive stones. 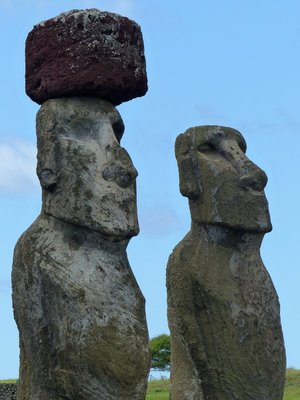 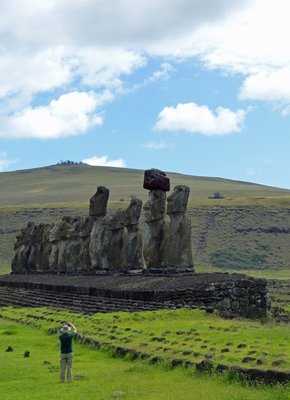 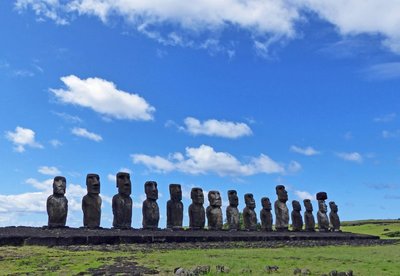 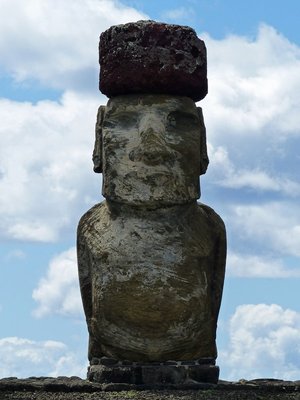 A little way in front of the ahu a large moai lies on its back. We can see from the fact that its eye sockets were not carved out (which was always done once the moai were in place on the ahu) that it was never installed; instead it seems likely that it was damaged while being transported from the quarry at Rano Raraku and never used.

Near the entrance to the field where Ahu Tongariki stands is a single lone moai, sometimes referred to by islanders as the “travelling moai” because in 1982 it was loaned to the Japanese government to be shown in exhibitions there, as a thank you for the support for the restoration project. You can get some good photos here, with the travelling moai in the foreground and the 15 on the ahu beyond. 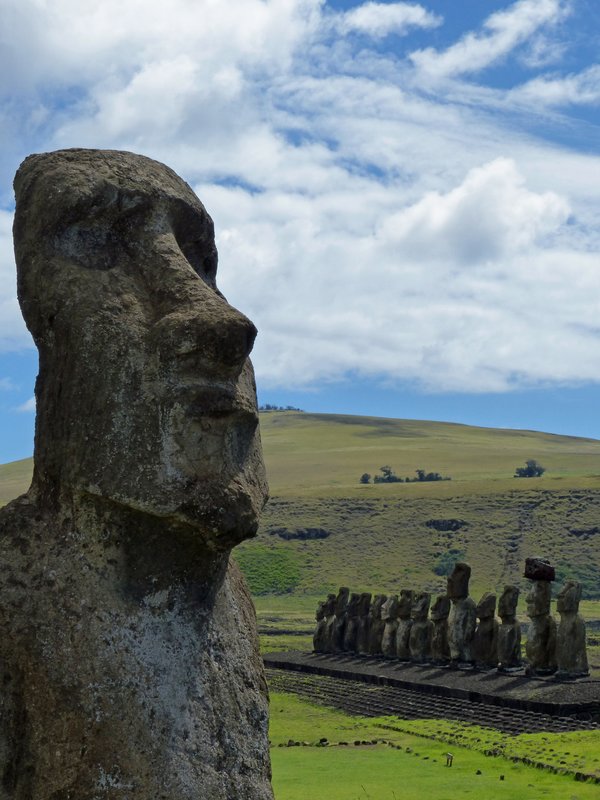 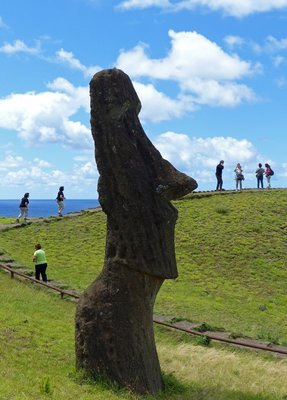 To call this the moai quarry, as many do, is in some ways misleading as it was more than that, serving as both quarry and workshop. The moai were not only carved out of the rock here (a relatively soft volcanic tuft) but also most of the more detailed work done in situ. When the moai culture came to an end, all work ceased and nearly 400 in varying states of completeness were abandoned here. Today they litter the slopes, many partly buried in the surrounding soil, like a sort of Rapa Nui Marie Celeste. 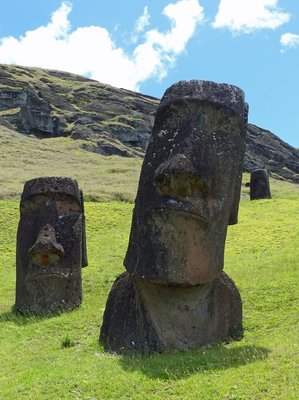 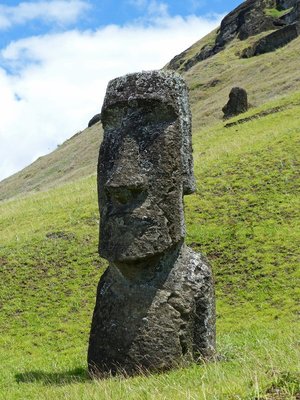 After having your ticket stamped the path leads you past a small shelter with information boards and on towards the volcano. After the first short climb it forks. The left-hand fork leads to the crater, which we didn’t visit, and the right-hand one to the quarry itself. Immediately you will find yourself walking among the moai. Some lie on the ground, others are half-buried, and all are haunting in their presence here.

A visit here is by far the best way to appreciate the scale of the undertaking by those earlier Rapanui in creating these monoliths. Further up the slopes we saw half-finished moai that show clearly the techniques used. First they would carve out the basic shape of the statue, horizontally in the rock, then sculpt the face. They then chiselled around and beneath until the statue could be separated from the rock, before levering it into a pit lined with wood and bark (for protection) to enable them to reach and carve the back of the head. Finer details, such as the eye sockets, were completed once the moai were placed on their ahu, which could be many kilometres away – possibly because it was believed that it was only when the moai had eyes that their power was activated. 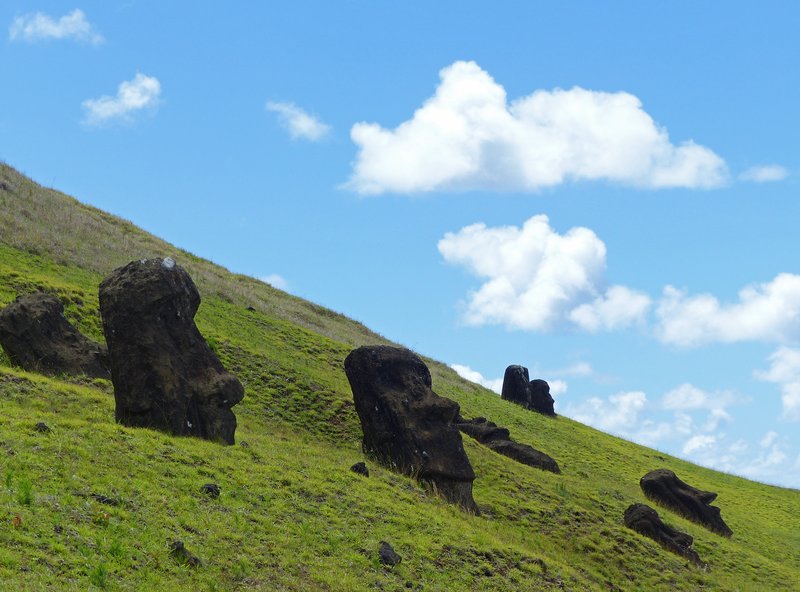 Once carved the moai had to be transported to the various ceremonial sites around the island. As with most aspects of this culture, various theories have been mooted as to how this was done. Early scientific thinking was that they were moved on giant tree trunk rollers (contributing to the deforestation) while lying on their backs. Most though now agree that it is more likely that they were transported in a vertical position, possibly on wooden sledges lying on rollers. Oral tradition describes them as “walking” to their final positions and while that sounds fanciful it may not be so far from the truth. In 2012 two US archaeologists and one from Rapa Nui developed a theory that they could have been “rocked” using ropes, and have demonstrated using a replica that this is indeed possible. 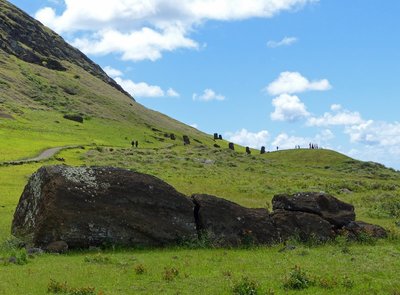 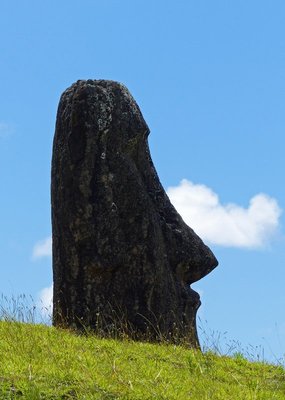 Some of the abandoned moai are huge – the largest around 21 metres in length (its head alone is seven metres long). This has led to speculation that one factor in the decline of this culture was that the people started to get over-ambitious and that the fighting between the clans was linked to rivalry in the creation of their moai, with each family wanting to show that their ancestors were the biggest and bravest. 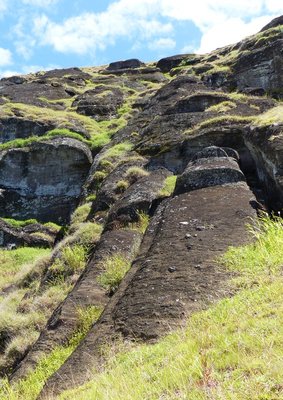 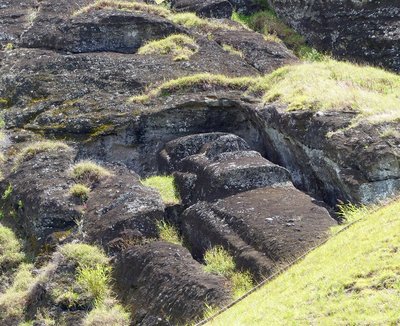 The largest moai, and a pair still attached to the rock 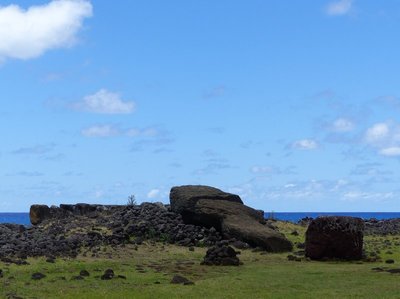 Having seen the scale of the moai carving undertaken at Rano Raraku it was interesting to visit next Te Pito Kura, site of the largest moai to have been successfully transported and erected on a platform. Perhaps it helped that this is one of the nearest ahu to the quarry? This moai, known as Paro (and its ahu as Ahu Tu’u Paro) is a real giant – almost ten metres tall (its ears alone are two metres in length) and weighing about 80 tons. It is thought to have been one of the last to have been toppled, some time after 1838. Certainly it is the last to have been reported as standing by a foreign visitor, the French explorer Abel Du Petit-Thouars, who visited the island in that year. No other European mentioned seeing any upright moai after that date.

Te Pito Kura means “navel of light”, a name that relates it to that sometimes given to Rapa Nui itself, Te Pito Henua or “the navel of the world”. This is a mystical place for the Rapanui. Not far from the ahu lies a special stone, nothing much to look at but with special qualities; its high iron content means that it retains heat and also affects compasses. It sits within a stone wall, with four smaller stones placed around it. Legend says that the stone was brought here by the first king, Ariki Hotu Matua’a, and that its spiritual power comes from the gods. They believe it imparts energy and can even increase female fertility. 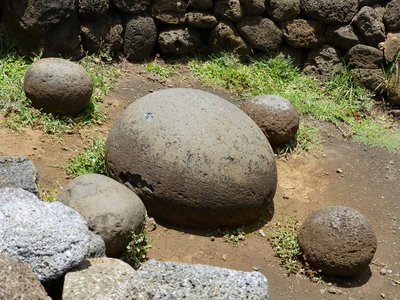 This is generally held to be one of the nicest beaches on Rapa Nui and it is certainly eye-catching. It lies on the north coast and is popular with locals and visitors alike, but didn’t strike me as at all crowded (although we did have to wait a few minutes to get a table in one of the cafés). It is also not at all over-developed, with the parking area, cafés and gift shops kept well back from and to one side of the beach itself.

This was the last stop on our day-long tour and some people from the group took the opportunity for a swim in the Pacific, but with only an hour here we decided to content ourselves with a paddle, photography and a cold drink.

For there is more to Anakena than sun, sand and sea. This beach is full of historical significance for the Rapanui. Oral tradition tells that it was her that first king, Ariki Hotu Matu’a, landed with his men and established the first settlement on the island. He is even believed to have lived in one of the caves here.

Naturally the village had its ahu, several in fact. The largest is the restored Ahu Nau Nau, with seven moai, four of them with their pukao in place. They stand among the palm trees (imported from Tahiti) their backs (as always) to the sea, as if trying to ignore the frivolity of the swimmers and sun-bathers on the beach below. Above them on a sandy ridge is Ahu Ature Huki with a single larger moai, the first to have been stood upright by Thor Heyerdahl, in 1956. 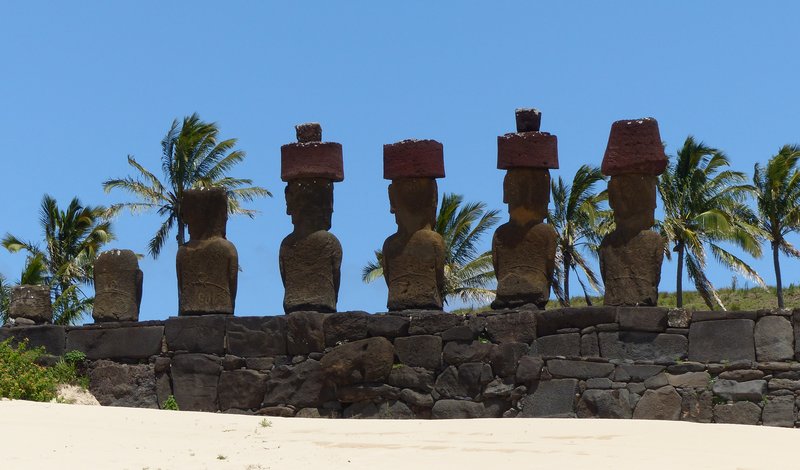 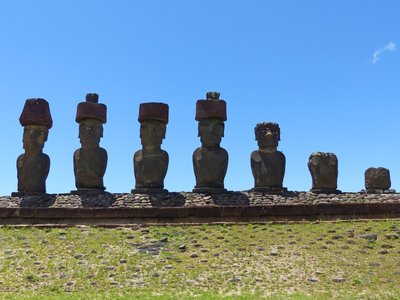 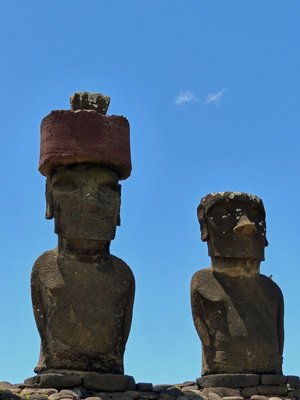 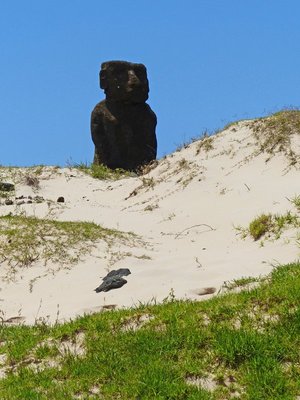 Anakena was the last stop on our tour and from here we were driven back to Hanga Roa across the centre of the island. While tours may not be “your thing” I do believe that on Rapa Nui they are well worth considering – private tours if your budget stretches to these, small groups otherwise. All the reputable tour companies there use local Rapanui guides and we found their insights into life on the island really added to our experience. They talked a lot not only about their own experiences, e.g. of growing up here, but also looking back at how it had been for their grandparents’ generation, before tourism revived the fortunes of this isolated speck of land in the vast Pacific. 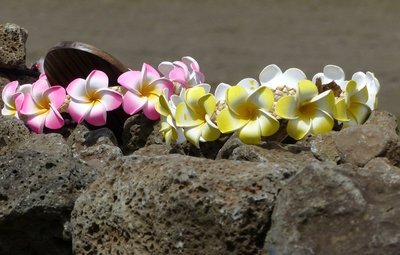 Great photos, Sarah. And it's fascinating to read about the history of these moai, and your guides telling about how their grandparents' generation lived.

Wow, you got in quick Don - I was still playing with the photo arrangement (it's fiddly here)

I once bought a friend a copy of one of those statues .. it was about 4 feet high & sat in her garden .. made out of a stone-like material that somehow managed to cope with the extreme freeze/thaw/heat of Canada .. &, the hat had a hollow so it acted as a bird bath.

Both my friend & the birds loved it.

Sounds interesting hasbeen - we bought a copy there too but only about 20 cm and made of wood ;-)