It's all about the wildlife 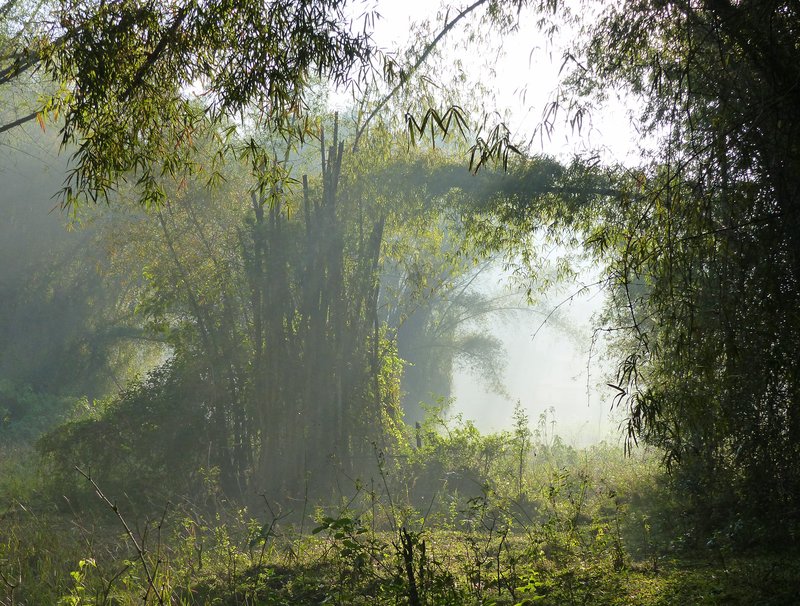 We were up early today for an early morning nature walk, led by a ranger recruited from the local tribe. These are usually small group walks but the local tour company had kindly arranged for us to have a private one. Overall it was a great experience and well worth getting up early for (and missing breakfast) although the one sour note was that our guide was not especially friendly and rather uncommunicative. It took us a while even to be sure that he was our guide, as he didn’t introduce himself and simply set off walking, so we were under the impression he was just taking us from the ticket office to the starting point for the walk. 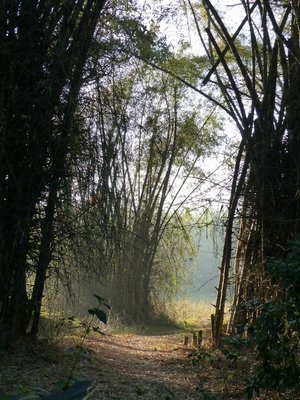 The light was lovely as we set out, with a light mist still clinging to the bamboo groves – very atmospheric. Our first wildlife sighting was an Indian pond heron and we were to see several more of these. It seemed odd to see herons in a grassland setting rather than near water. There were also a few langur monkeys in the bamboo. 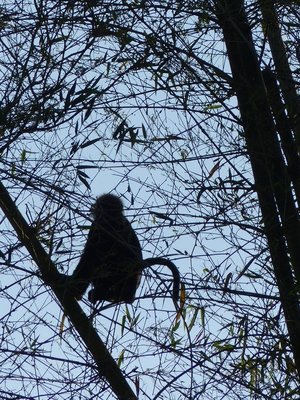 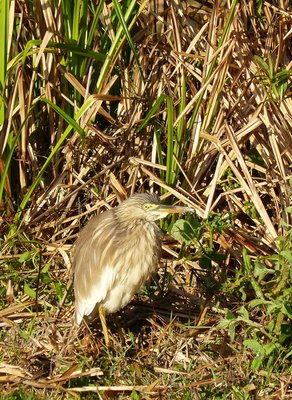 Our walk took us across an open area to start with, and on the far side we spotted a small group of wild bison. Our guide led us around the edge of the area, next to the trees, and we were able to get quite close. There was a large male, five females and four young which he said would be about thirty days old. 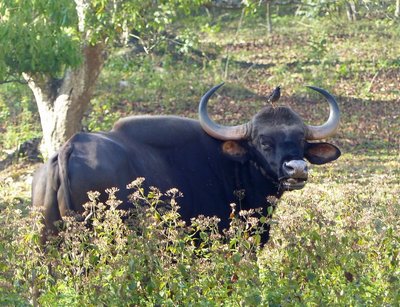 After spending time taking photos of this group we moved on and climbed up a little into the forest. Here we came across some Sambar deer including a couple of males with antlers - beautiful but hard to photograph through the trees. 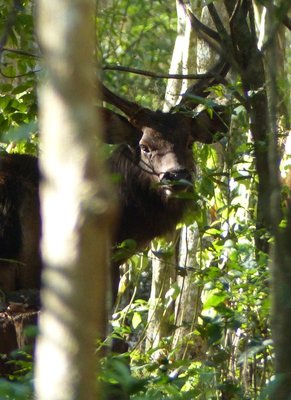 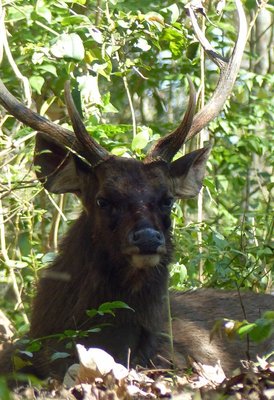 The various birds we saw were similarly difficult to capture - some eluded me completely, others were out of focus. The same was true too of the surprisingly large (though the clue is in the name!) Malabar Giant Squirrel, but it was fascinating to see him just the same.

Our walk lasted about three hours altogether. Here is a full list of our sightings:

You will note that there are no tigers mentioned above. Although there are tigers in Periyar (about 100 of them), the chances of seeing one on your visit are low, and the fact that our guide this morning didn't carry any weapon, even a big stock, indicates just how likely you are to see tigers on these walks. And while it was a little more disappointing not see elephants, which can quite often be seen, we were to be compensated later in the day, as you will see …

After our walk we returned to the hotel for a few hours, to relax by the pool and swim. We were excited to be joined for a while by a troop of langurs who came crashing through the trees around the pool and scrambling over the rooftops of the accommodation cottages. We had to laugh at one in particular (in my second photo), who kept falling out of the tree. Each time it happened he would look round to check none of the others had seen his embarrassment, hide behind a bush for a few minutes to be sure, and then climb back up still hoping no one else had noticed - only to fall again a minute later! 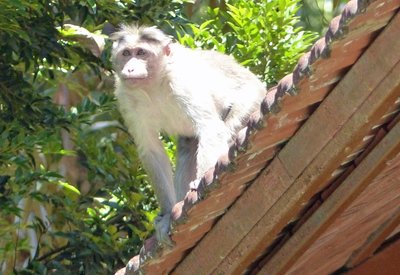 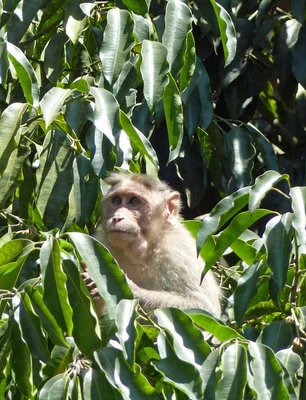 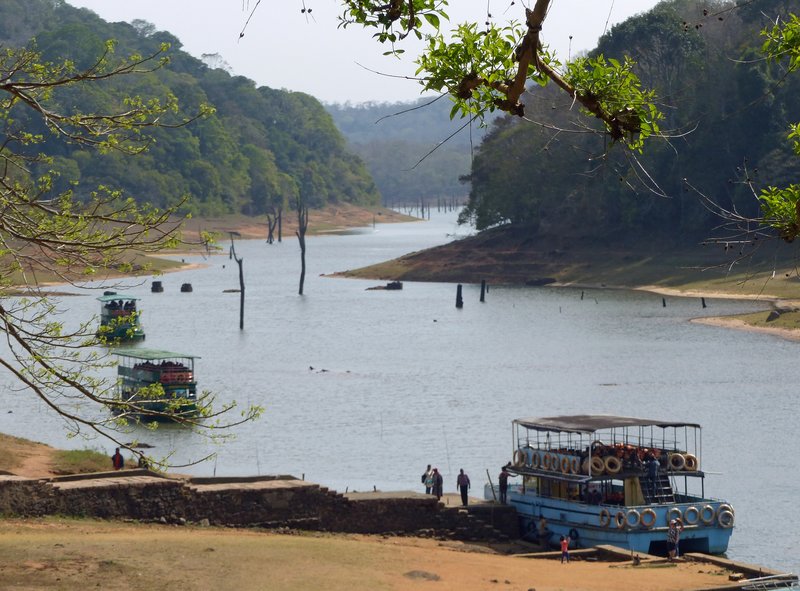 I hadn't expected great things of this particular outing as the Rough Guide to Kerala is pretty scathing about these boat trips, suggesting that the boats are too noisy and sightings of wildlife not that common. But as our tour company had booked us on it we thought we would go, and simply enjoy our time on the water if nothing else. However as my photos will show, guidebooks aren't always right, and we saw more than enough wildlife to make the trip worthwhile. 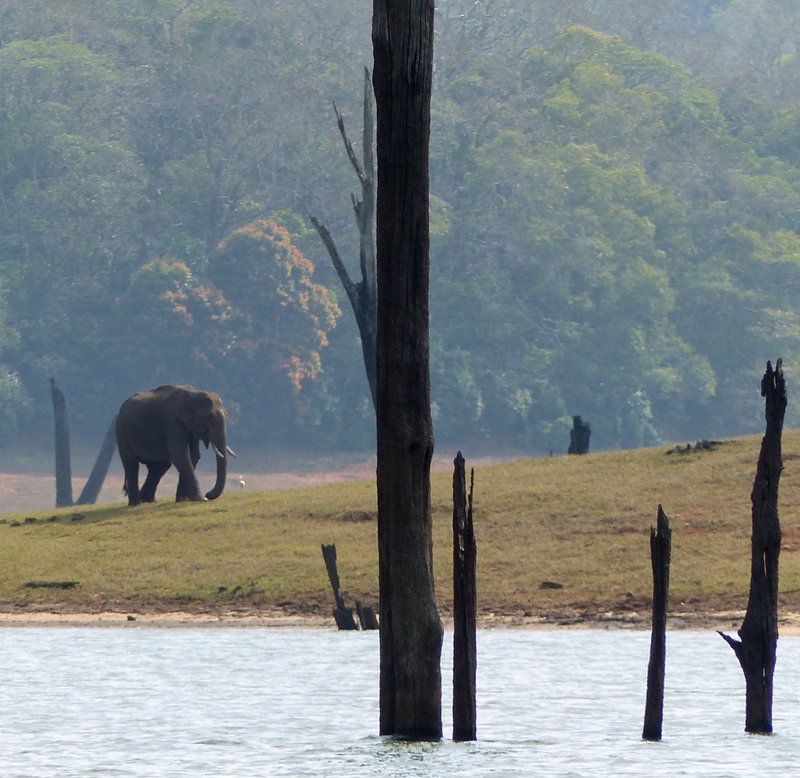 The highlight came quite early on when we were privileged to see one of only around 100 male elephants in the park (according to the on-board guide, females outnumber males by 9 to 1). This is a young bull of about ten years (above), and he spent some time grazing near the lake before trumpeting at an egret and crashing into the trees. Of the half dozen boats that set off at 3.30 pm, we were in the second so only passengers on the first boat and on ours got to see him. 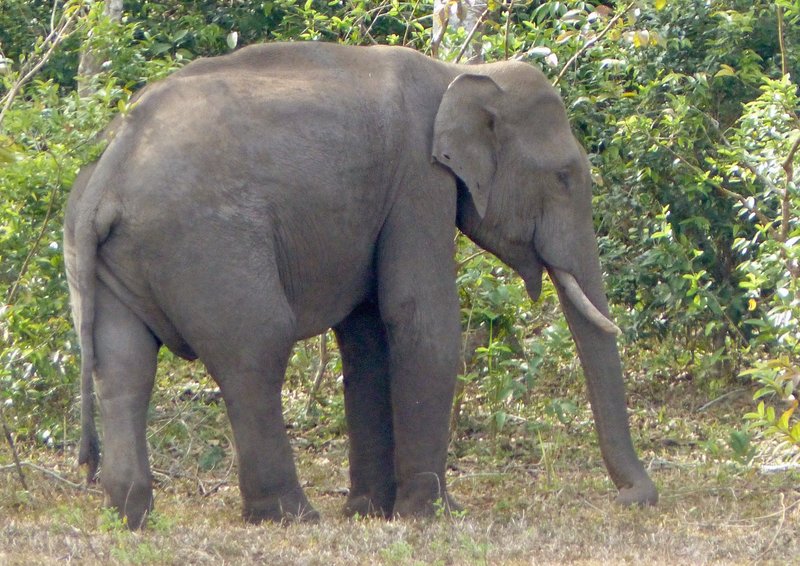 But it wasn't long before we came across a small group of females with a baby, kicking up some dust near the water's edge, and another group strolling past beyond. More than enough elephants to give the lie to the Rough Guide's disparaging remarks. 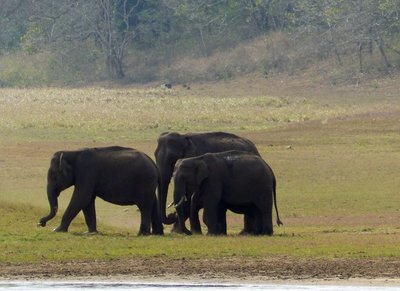 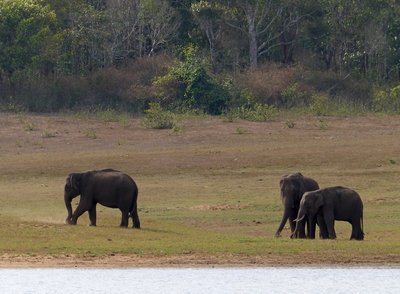 And there were plenty more animal and bird sightings in the next hour or so: 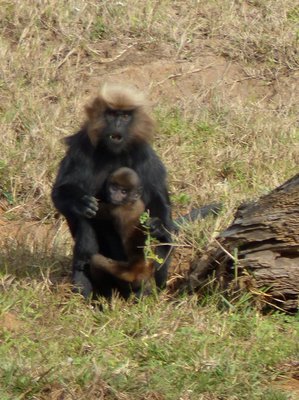 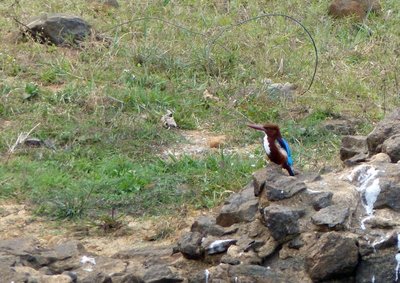 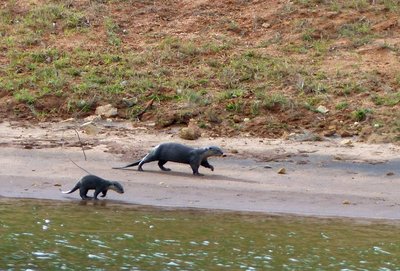 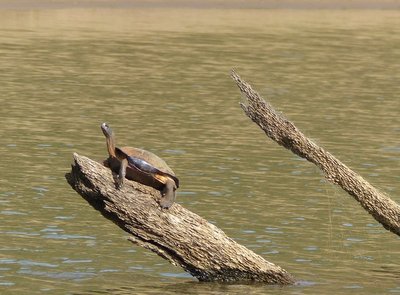 The boat ride lasted about an hour and a half. The wildlife viewings were divided evenly between the outward and back journeys, with more elephants and deer on the way out, more monkeys plus the wild boar and otters on the return leg. The guides were very good at spotting things and pointing them out, although I found their tendency to want to grab my camera and take photos for me a little irritating - while they did get some good shots (notably a video of the otters on Chris's camera), I wanted photos that I could claim as my own.

That said, overall this was a very good experience and certainly outdid my admittedly low expectations. And the path between parking area and boat jetty proved to be an excellent place for photographing the langurs in particular, who of course know that where there are lots of tourists there will also be plenty to eat. Even if people obey the many exhortations not to feed the monkeys, there are always scraps dropped on the ground and bags easily opened to retrieve the treasure within. On our way down to the boat we had also seen a beautiful black Nilgiri Langur, much less common but posing beautifully for our cameras. 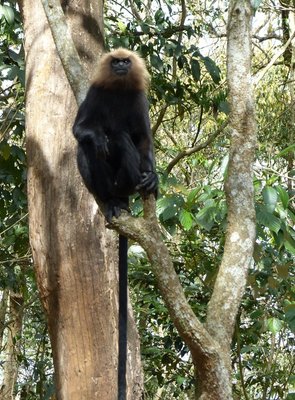 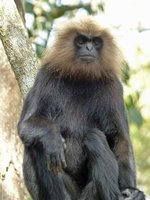 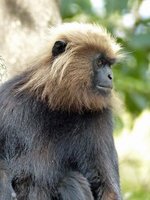 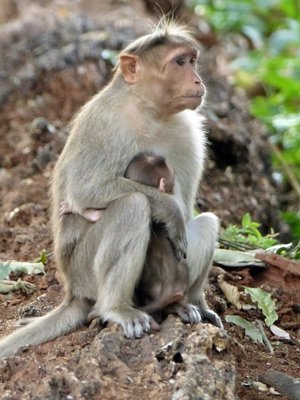 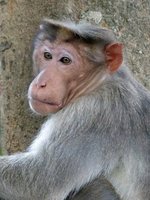 We had dinner that night in the hotel again, with our super-friendly waiter Saju as eager to please as he had been on the previous evening, and the food as good (with special mention to the lemon rice!) 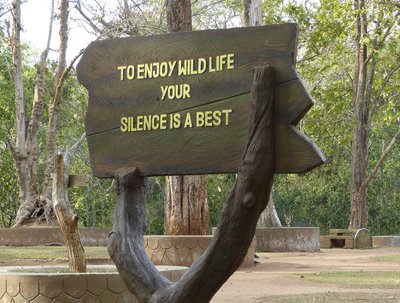 All stunning, made my day! Loved the grey langurs and the nilgiri langur, posing like a statesman!

It's hard not to be able to "Like" or "Adore" all photos... Since joining FB to keep in touch with VTers, even as I read, I'm looking for the "Like" button. LOL!

Guess I should be silent now... judging from your sign above! Bravo for this trip to Kerala and for the way you describe it to us. lou

Wondeerful photos, Sarah. You were lucky to come across the elephants, especially the rarer male one.

Thank you both. Lou, I'm blushing! I understand there's a "like" feature for photos in development - already introduced to forum replies just last week. But use it sparingly, eh?!!

Albert, I was so chuffed about the elephants, especially as we'd seen none in the morning :-)

I'd like to say the latter but will admit to the former.