We take to the (back)water

Return to the coast 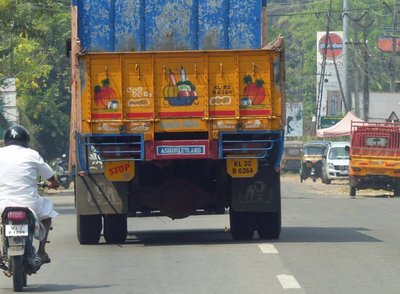 As we weren't leaving Kumily till 8.00 we had a chance today to sample the Cardamom County breakfast which we had missed the previous day. Saju was there to greet us and even remembered how we like our coffee after just one previous order. There was a good selection of fresh fruit, hot dishes, bread and pastries, as well as an omelette station, but I kept it simple as I knew we would be likely to eat a lot on our rice boat backwater cruise.

Our drive to the coast took us back through the three zones we had passed through travelling from Kochi to Munnar, in reverse order of course - the High Range with its spices and tea plantations; the middle zone with rubber trees, coconut palms, pineapple and banana groves; and the flat coastal zone with paddy fields and larger towns.

We stopped briefly at another of the huge churches that dot the landscape in Kerala. While these are impressive they come at a price, as the practice of tithes is still alive and well here and Christian church members are expected to give 10% of their income to the church – hence the stark contrast in these villages between imposing church buildings and very small poor houses. Like the one we had seen on our way to Kumily, this is dedicated to Our Lady of Good Health. 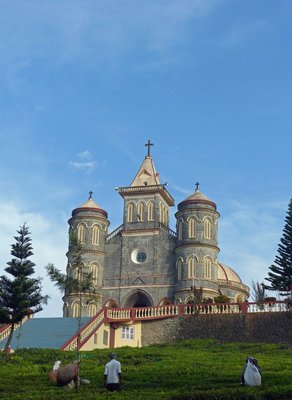 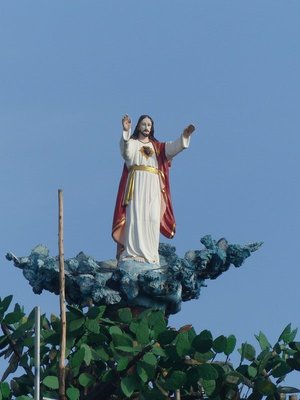 In front of the church people were picking tea, but in the same manner as we had seen in Munnar – instead they had little hand-held picking devices which clip off the top leaves and drop them into the attached small bag. 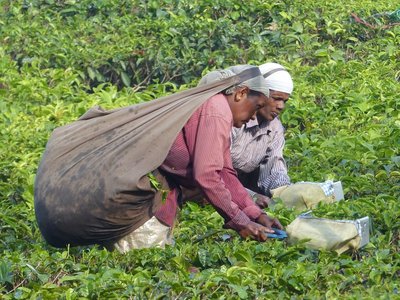 Our route took us through a few towns too, where I was able to grab some photos whenever we stopped in a jam, and along roads dotted with frequent warnings of the dangers of speeding and reckless driving, all of which were being ignored by all drivers, as far as I could tell! We stopped at one point for a cold drink and so that Unni could have a coffee - the photo of the sign warning against bringing in food from elsewhere was taken there. 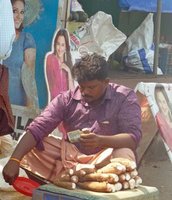 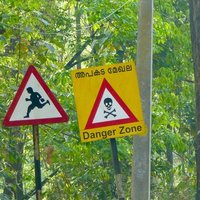 On the road to Alappuzha 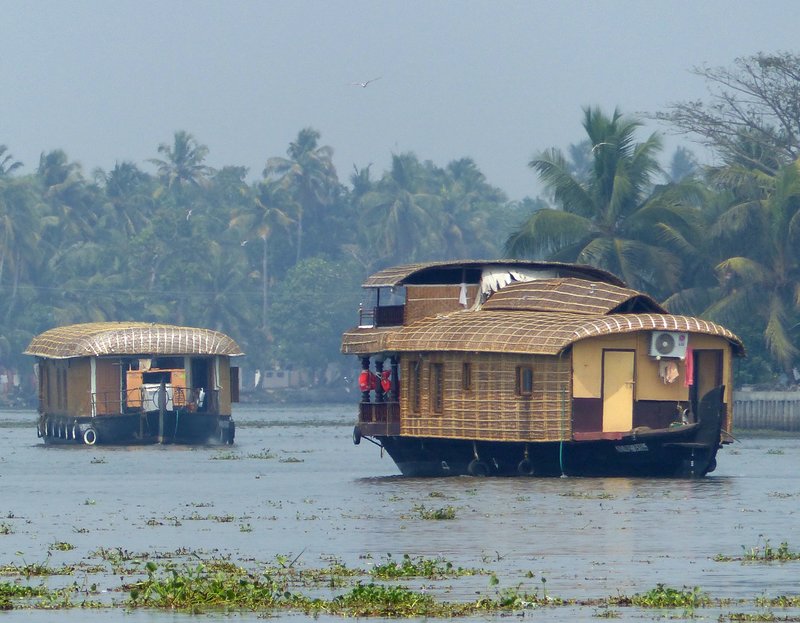 Near to Allepy, or Alappuzha, we arrived at the departure point for our overnight backwater cruise - one of the reasons for booking the trip to Kerala as I had heard good things about this experience from friends. The boarding process with Lakes and Lagoons was a little chaotic as our boat was on the far side of the water and along with a number of others we travelled there by motor boat. We dropped off everyone else before it was our turn to board a boat, which I was a little bit disappointed to see was rather tattier than some of the others, although with a nice seating area at the front. And of course, once on board you don’t really see your own boat!

We set off immediately after boarding. Once we had cleared the small village we moored for lunch - tasty kingfish steaks with rice and vegetables, and fresh pineapple. 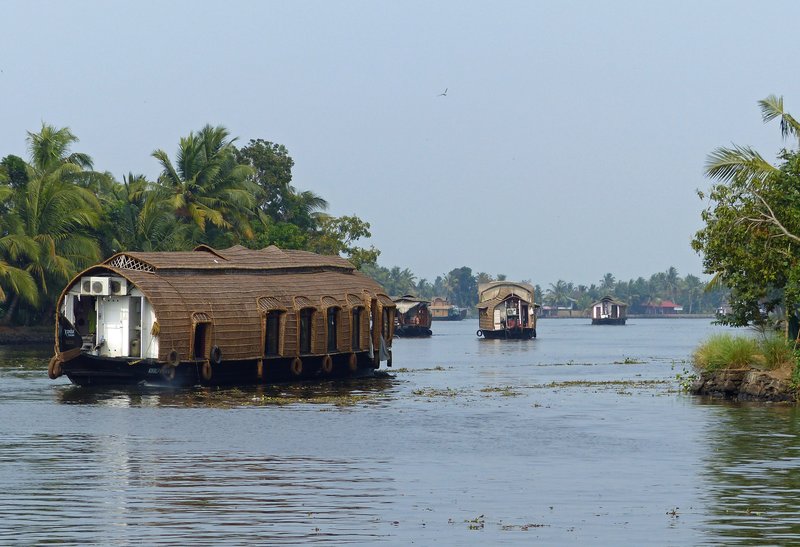 We got us a convoy!

After the crew of two had eaten their lunch too, we were off, along with quite a few other boats. This first stretch felt like a bit of a convoy, but it was interesting to see the variety of styles in the houseboats and of course there was plenty to interest us on the banks also. Here a woman was washing the family's clothes, there a man fishing for dinner. We saw small shops, schools, and all the necessities of a daily life lived by the water's edge. 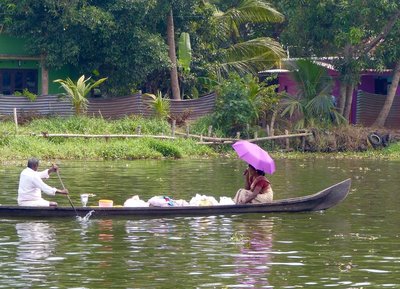 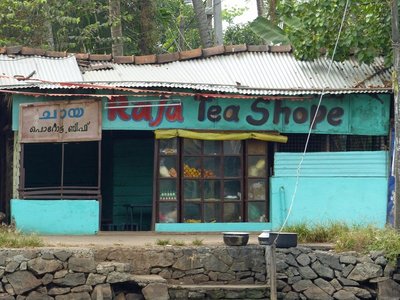 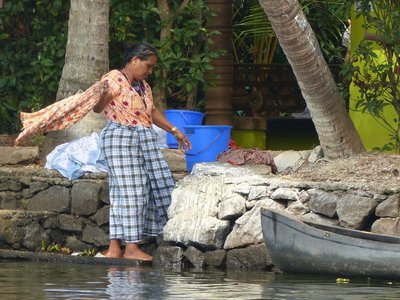 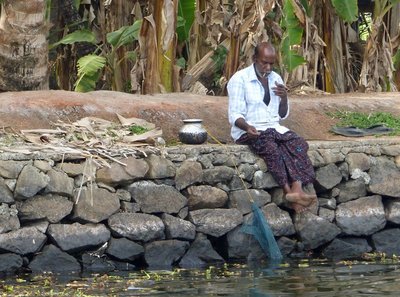 Life by and on the water

After a while we emerged on to a large lake which was dotted with houseboats and smaller vessels. The breeze here was very welcome, although there was less to see, being further from the shore. On the far side we entered another channel and here we got closer to the banks and also had fewer other houseboats around us. By this time children were coming out of school and it was fun to see them being boated across the water to their homes or catching the public bus which was, naturally, also a boat. 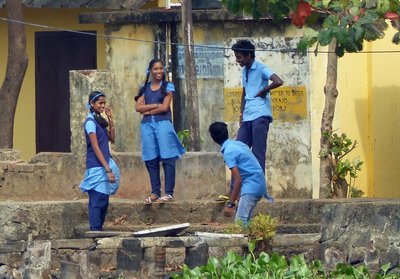 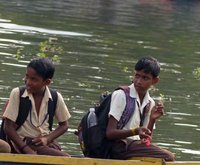 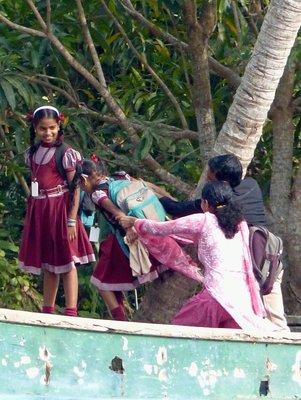 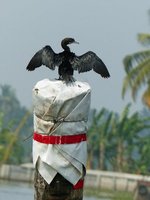 There was also lots of bird life to photograph. I spotted herons, cormorants, terns, an osprey, a bee-eater (I believe this is a Blue-tailed bee-eater which is most often seen near large waterbodies) and a few I couldn't identify. 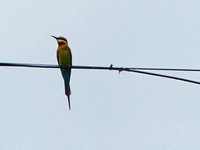 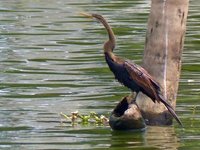 Around 5.30 we moored for the night near some paddy fields. We were able to get off for a short walk to stretch our legs and take a few more photos - coconut trees with coconut shell "steps" tied to the trunk to aid picking, a flotilla of ducks (duck farming is a thing here), the fields themselves. 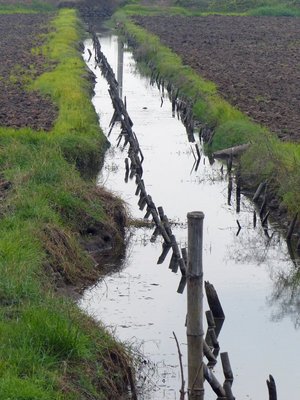 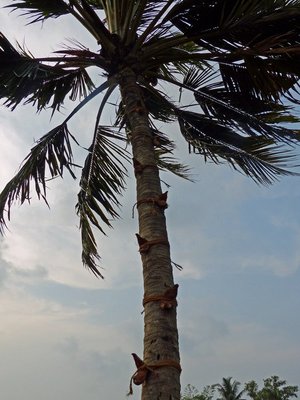 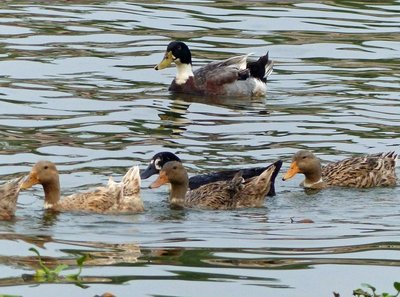 Then it was back on board for the evening. The crew had put up mosquito nets in our absence but there were enough gaps around these for it to seem more like a token gesture than a real deterrent - do bring and use DEET spray if you do this trip.

Dinner was served at 7.30 and consisted of chicken curry, a very good okra dish, yellow dal, rice and chapatis. If you want any drink other than water while on board you need to purchase this at the small shop in the check-in office, and we had duly brought a couple of bottles of Kingfisher beer along which were chilled for us and served at dinner. 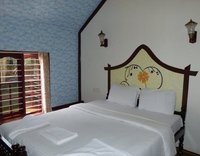 Ours was what Lakes and Lagoons term a "deluxe" boat, which basically means you have air conditioning in the room, although only between the hours of 9.00 pm and 6.00 am (it is in other respects quite simple, even basic). Once it was sufficiently cooled we retired to relax a little, read and in my case catch up on these notes, before an early night.

I can't resist finishing this blog by sharing just a few more of the photos I took as we cruised - feel free to skip over these if you have seen enough! NB There will be more tomorrow ;-) 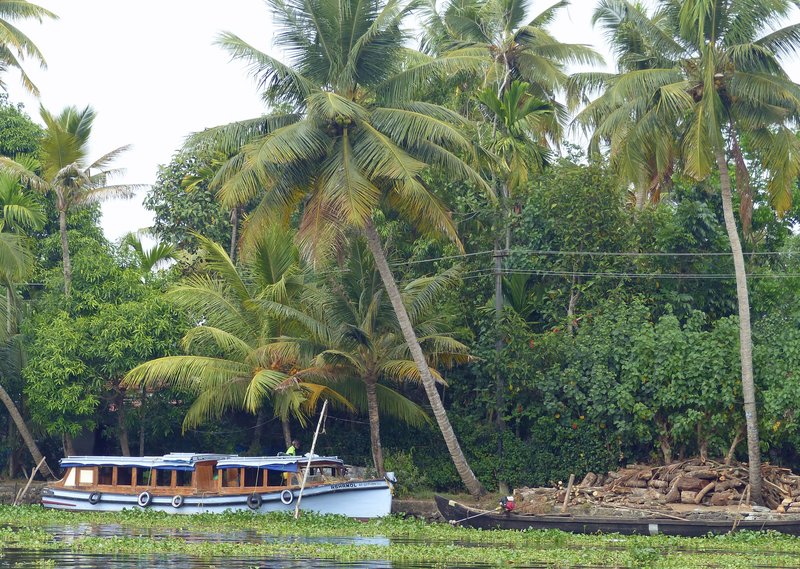 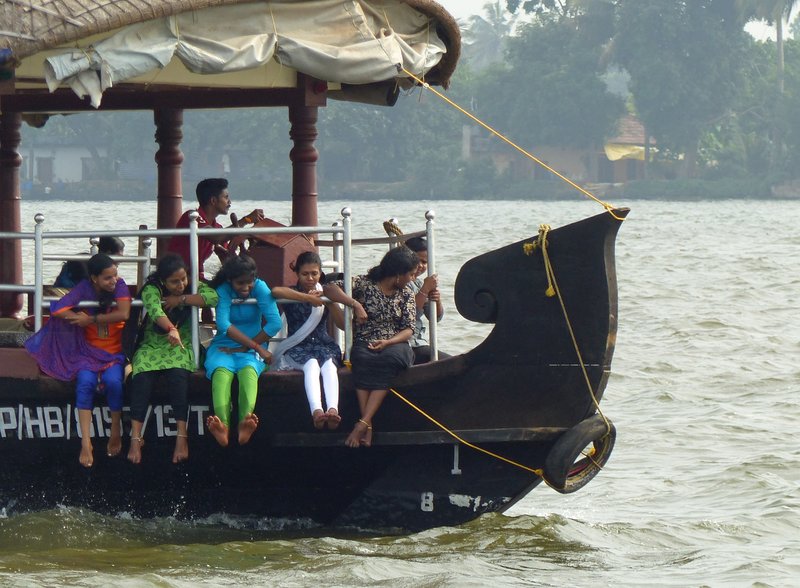 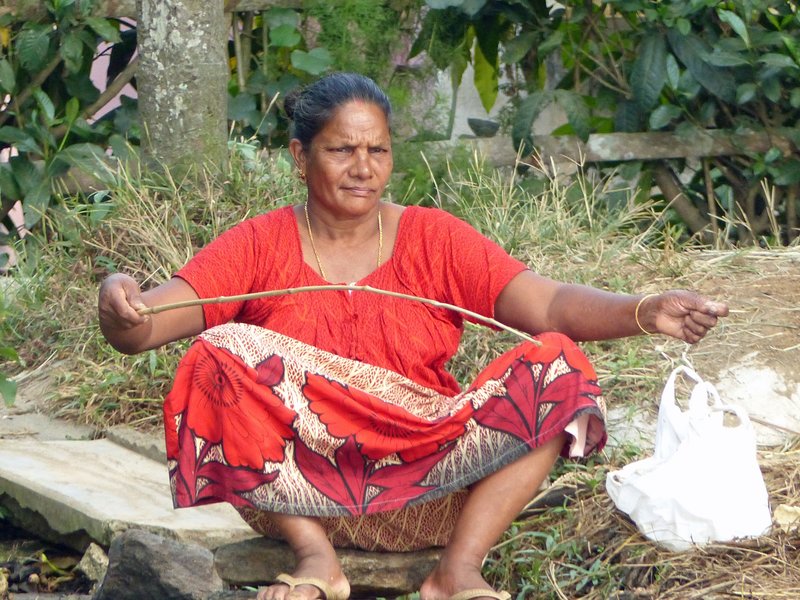 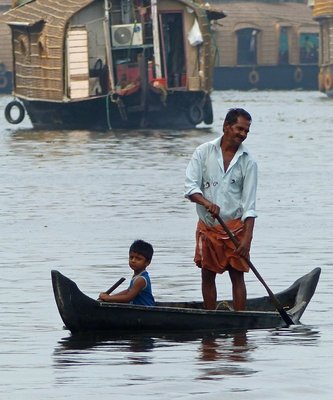 I nice read before retiring for the night -