From backwaters to beach

Winding down by the sea 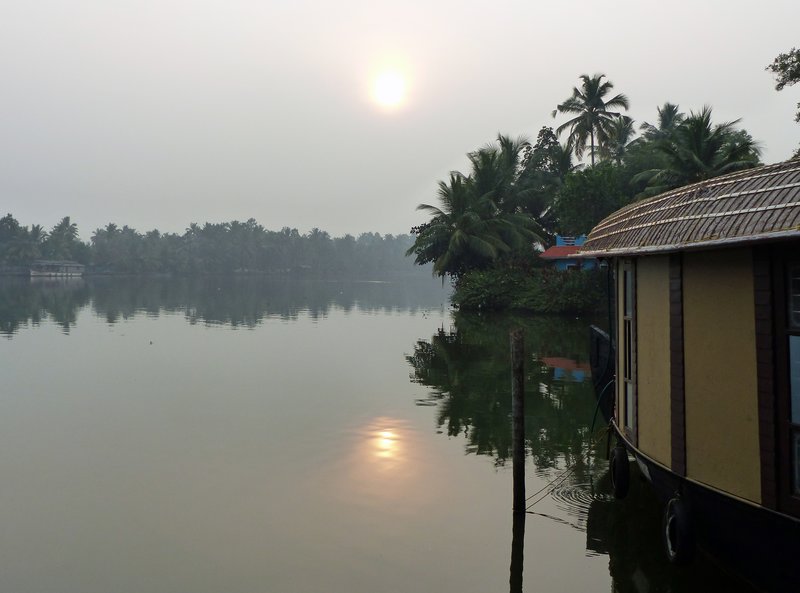 Sunrise on the backwaters

We slept pretty well in our bed on the houseboat, which remained moored all night. I woke soon after five when activity on the water meant that the boat moved more. The a/c cut out at six as we had been warned and we were up very soon after. The shower facilities were basic but adequate, and as soon as we were ready and packed we were out on deck again and decided on a short walk onshore before breakfast.

Near where we were moored I spotted two men harvesting coconuts and walked along for a closer look. They kindly permitted photos (in fact the guy doing the actual cutting was keen to pose when he climbed back down). What fascinated me was the contraption he used to climb the trunk, or rather contraptions, one for each foot - a metal frame curved to fit the trunk and strapped to his feet, with adjustable wires which clamp against the trunk as it takes the harvester's weight. Very clever! 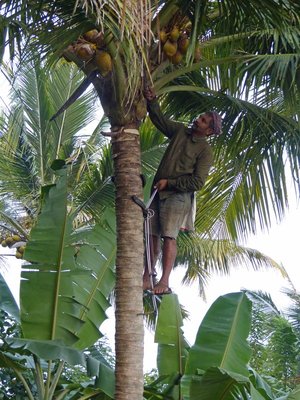 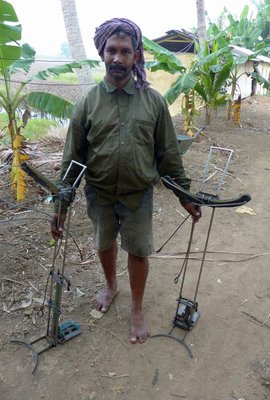 Coconut harvesting on the backwaters

After an onboard breakfast of good omelette, rather limp toast, coffee, pineapple and banana (and the odd and unappetising boiled banana!) we cast off and headed back to base. The morning light was lovely for photography and we saw some more birds including an eagle and several kingfishers. We passed a temple where music was playing - very atmospheric. 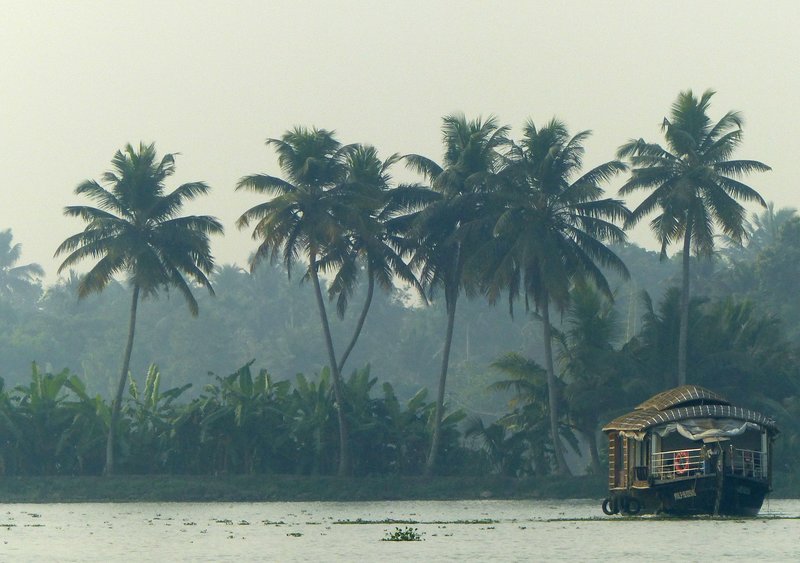 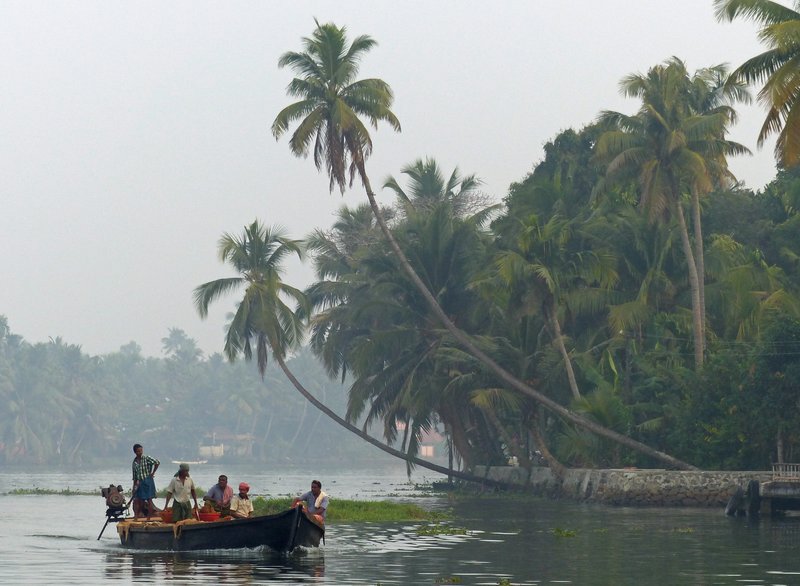 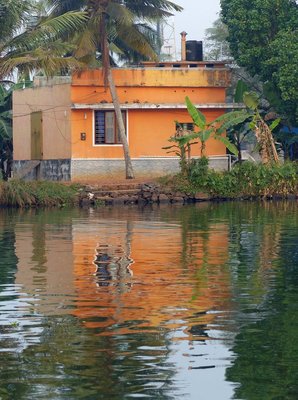 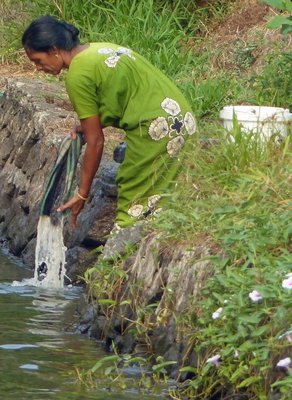 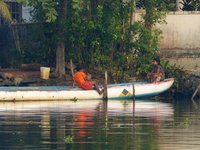 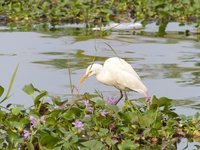 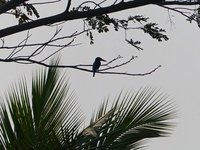 Soon after nine we were mooring again at our starting point. We had to wait a while for the motor launch to ferry us back to the main jetty, and when it came it was a much smaller one that seemed to ride precariously low in the water once guests from a number of other boats had been collected - ten in total, plus their baggage, at least eight crew, their bags plus various bits and pieces such as laundry and rubbish from the boats. Still, we arrived safely and Unni was there to meet us, of course.

We then set off on the drive south to Kovalam. With no hills to negotiate this was a faster drive than our previous ones, but also a longer distance so it took a similar length of time - a bit over four hours. Being faster, and busier, the road was also a bit more nerve-wracking, with some crazy overtaking manoeuvres and almost constant sounding of horns. You don't need to be in India for very long to realise that the driving style here is very different from that at home. In England you are expected to keep out of everyone else's way; in India, everyone else is expected to keep out of your way. It shouldn't work but somehow, 99% of the time at least, it does. Nevertheless the many signs along the road exhorting you to drive safely are an indication that this isn't always the case. 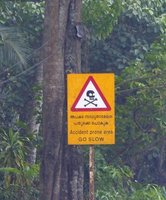 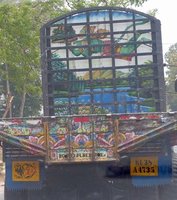 We passed through lots of towns on this journey so there was plenty to look at, but we were glad to eventually arrive at our hotel, the Travancore Heritage, even though that meant saying goodbye to Unni. He was driving straight back to his home in Kochi, with another job waiting for him there tomorrow. 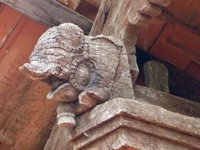 Roof detail on our bungalow

When we were deciding on a beach hotel in which to wind down at the end of our Kerala trip, TransIndus recommended the cliff-top Travancore Heritage, near Kovalam, as a good option in our budget, but it seemed to get mixed reviews. In particular the standard rooms, which are located at some distance from the main complex (at beach level and accessed by lift) came in for some criticism. So we decided to pay a bit extra for one of the better rooms up on the cliffs, and our agent at TransIndus, Hari, kindly offered to upgrade us further to a top of the range Heritage Premium bungalow. Thus we found ourselves spending four nights in a large comfortable room, with all the character that comes with having been converted from a traditional Keralan house (hence "heritage"). This isn't a luxury resort so even these best rooms have some downsides (too flimsy dividing wall so we heard conversations in the adjoining room rather too clearly, and a somewhat basic bathroom at odds with the style of the room) but we had loads of space, a large bed, and efficient a/c. 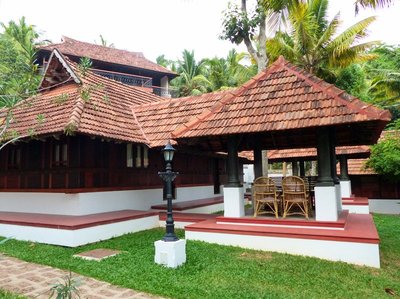 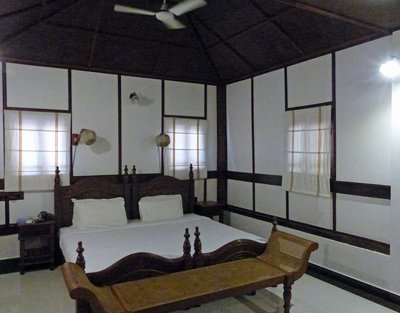 Best of all though, we had a lovely area to sit out with a partial view of the beach and Arabian Sea beyond. This proved a good spot for watching the various birds that frequent the gardens, including on our first afternoon a black kite, as well as egrets and pond herons. 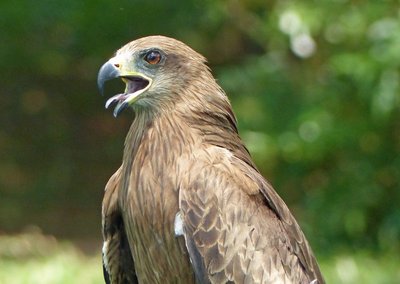 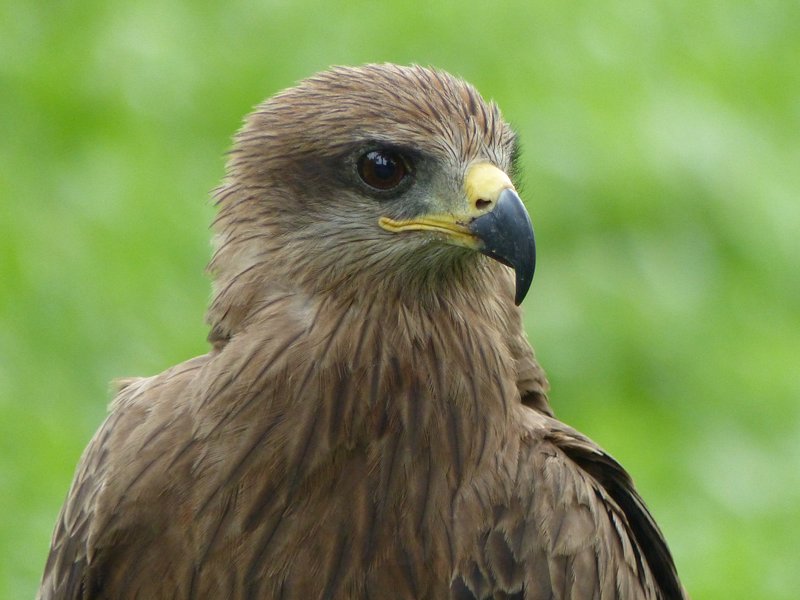 After settling in we took a walk down to the beach, which is reached via a lift/elevator down the cliffs and a stroll across a grassy area that seems to serve as both local cricket and football pitch and grazing land for cattle. The hotel provides the regular services of loungers, towels, sun shades in a section on the right-hand side, while the left side is a working fishermen's beach. As a backdrop the cliffs are dotted with large religious (Christian) statues which seem oddly out of place.

The beach stretches for miles to the south of here and the views are lovely which, coupled with the interest of watching the local fishermen at work, drew us here much more than the sunbeds. I have read some reviews of the hotel that are critical of this beach and it is true that these aren’t pristine sands, but we liked being on a local working beach much more than we would a purely tourist one – better for photography, for interest, and for the local community too. 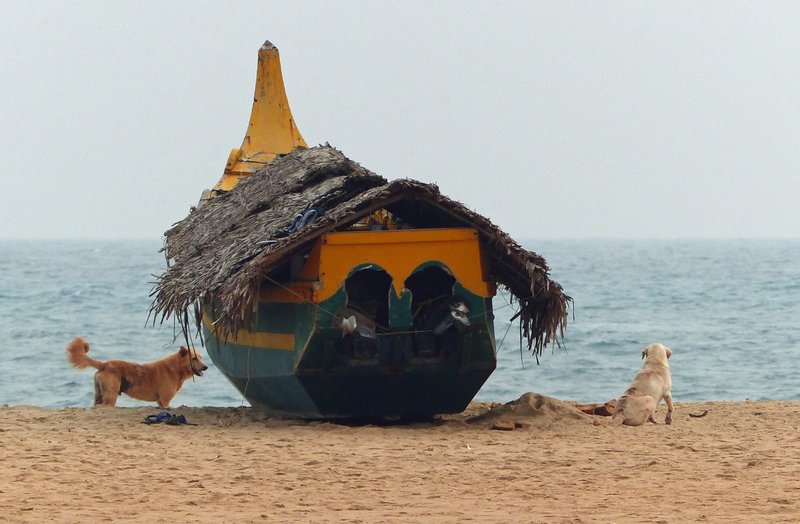 In the evening we ate in the large restaurant overlooking the swimming pool, which offers both buffet and a la carte options. As usual we went for the latter and had a very good meal although the service was on the sluggish side and a little erratic, our cauliflower fritter starter arriving only two or three minutes before our main course choices. But my fish tikka masala was excellent, as was Chris's chicken dish, and the Kingfisher beers were cold, so we were pretty satisfied with our evening. 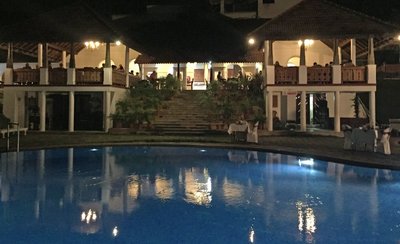 Open House restaurant at night, seen from far side of the pool

Some excellent photography as usual Sarah, I particularly like the opening picture.

We had a similar heritage hotel in Kovalam, perched on a clifftop. No lift for us though.

Thank you Grete :-) The lift was a godsend - the hotel grounds were steep enough but at least we didn't have to climb the cliff each time we went to the beach!

Some great pics here Sarah and enjoyed your descriptive writing..I hope to visit this part of India next time around.

I am in Nepal and only scanned over your new page on here Sarah - But it looks great - I will have to make sure I come back and read it properly :-)

"Don't be rash / lest you crash" -- good advice. But one of the other signs says this is an "accident prone area". I'm glad you survived the car journey.

@ Don, we certainly saw some potential accidents in the making, watching the other vehicles on the road, but no actual accident here at least. And the tourist drivers are trained to drive much more carefully than is the norm here, although it still feels a bit hair-raising at times!

Enjoyed reading about your journey Sarah, your photos complimented your writing. Often wondered what it would be like to visit India - the traffic and crowds might concern me.

Lovely photos Sarah. And how exciting that you stayed a houseboat . Brought back happy memories

Thanks again all of you :-) Mike, if you travel with a reputable company they will make sure you have a safe driver, and for me the crowds are part of the experience. Everyone there is so friendly that even in large numbers they don't seem at all intimidating. Besides, if you avoid the big cities it really isn't an issue

Great account Sarah. The contraptions used to climb the coconut trees are a bit of a cheat though!

With so many to pick I reckon they need all the help they can get! But it was noisy!