Life’s a beach – or maybe a swimming pool 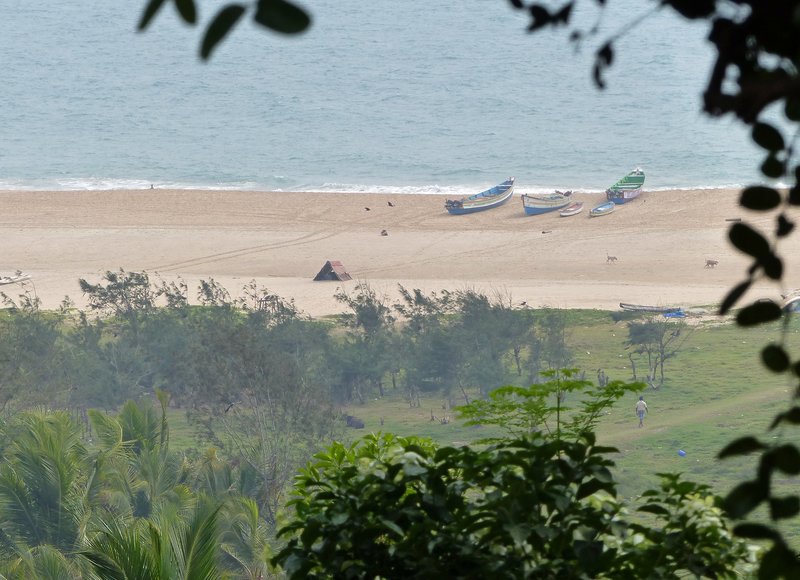 View of the beach from our bungalow's private seating area 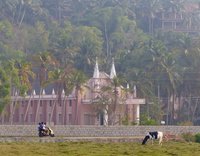 The church by the cliffs

The last few days of this trip were all about unwinding in some winter sun before returning to face the last few weeks of an English winter, and the Travancore Heritage Hotel was a pretty good spot in which to do that. Although on the first morning I wasn’t so sure this would be the relaxing spot we had hoped for, as we were woken at 5.00 am by the clanging of a bell. At the time I assumed this was from the church just at the foot of the cliffs but it could also have been from the shrine at the other end of the beach. Either way, the bell was followed by what seemed like an entire service (about 80 minutes) broadcast over a loudspeaker, interspersed with more bell clanging. I respect people's right to worship whenever they want to (though 5.00 am seems ridiculously early!) but why they need to broadcast it beyond the church walls I do not know! Still, this is their home not mine, and fortunately it proved not to be a daily occurrence - the only other time we heard it so early was on the day of our departure when we had to be up at 5.00 am in any case.

Our first day at the Travancore Heritage Hotel

We started our first full day here with a pre-breakfast visit to the beach. This is the best time to go if you want to see the local fishermen land their catch, and we found that no one minded us watching and taking photos. The scene was lively and colourful, and great for photography. We repeated this little walk on our last morning too, and I’ll be adding a separate entry devoted to the fishermen of Chowara, so here are just a few photos to whet the appetite for that! 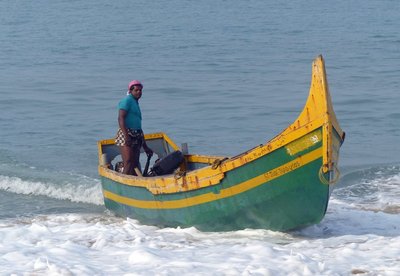 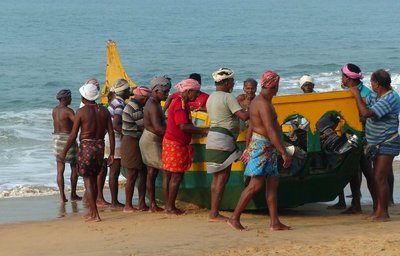 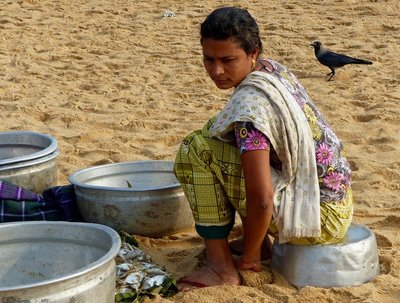 Breakfast at this hotel is a fairly extensive buffet, with fresh fruit, juices, lots of bread, cake and pastry items, eggs to order, and several Indian dishes. The coffee isn't too bad either. After breakfast we spent some time by, and in, the large swimming pool, but when the sun crept round to our loungers late morning we retreated to the shade of our own terrace. 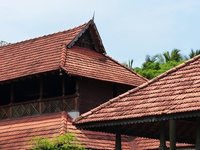 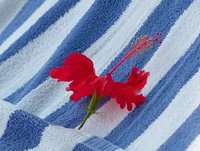 
After a light lunch (sharing a club sandwich) we checked out the hotel's small gift shop. I tend to avoid these, thinking you get much better value in local shops, but there had been few opportunities to shop on this trip and I wanted to get myself a bit of jewellery as I am slowly replacing my collection following our burglary last year (when I lost so many holiday souvenirs collected over the years). I found the prices here surprisingly reasonable and chose a silver enamel bracelet at 1,500 rupees (less than £20).

Later in the afternoon we took another stroll on the beach, as we’re not ones for spending all day just lounging, and of course the evening found us again dining in the hotel's Open House restaurant where the star dish for me on that occasion was the vegetable jalfrezi. 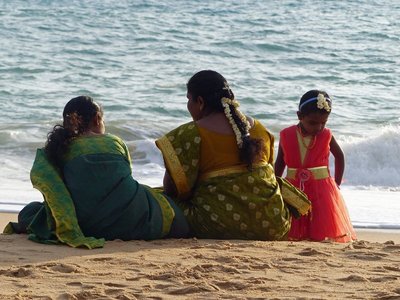 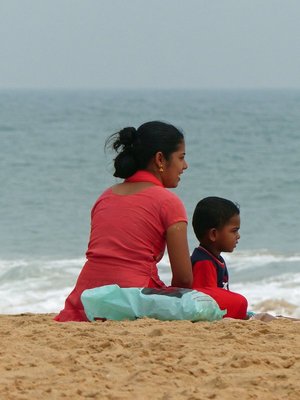 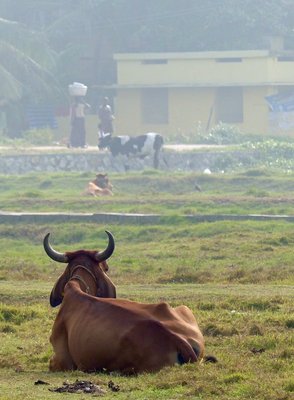 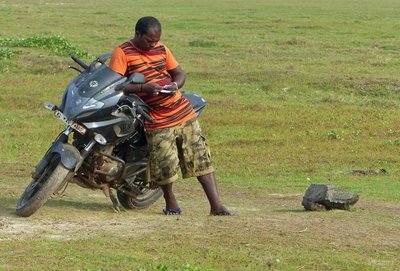 And thus, or similarly, we passed our last few days in Kerala. On the second morning we skipped the beach and instead took a walk in the nearby village, Chowara, where the friendly locals took no issue with my camera, and several willingly posed. Sights such as a small Hindu shrine, different foods on display in the shops, traditional scales and weights, and the people themselves - all are everyday things to them, and it must seem strange that we find them "exotic" enough to photograph. But then, I am often surprised at the things I see tourists photographing in London, where my everyday is their exotic. 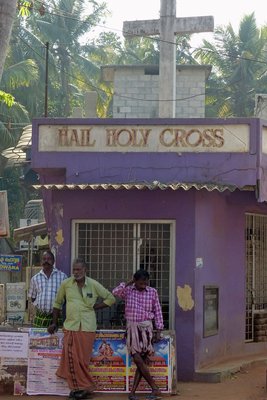 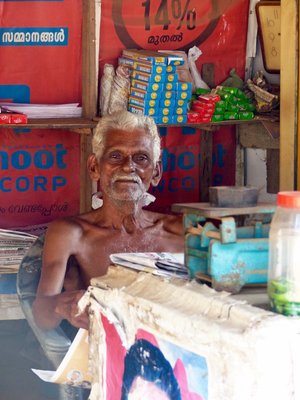 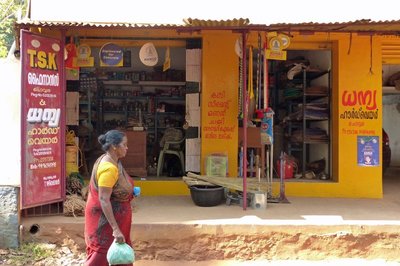 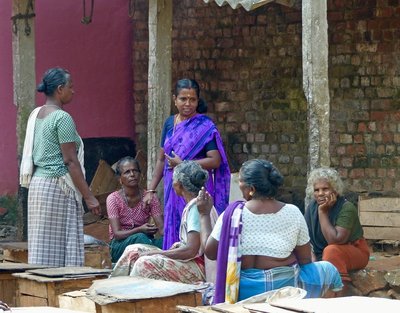 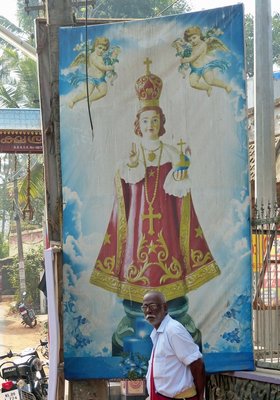 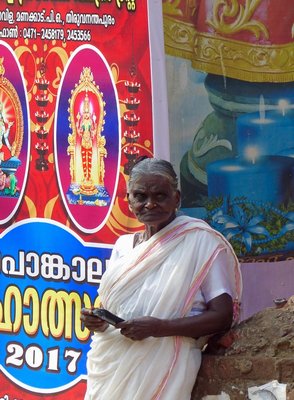 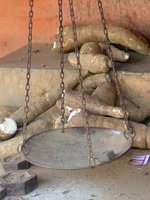 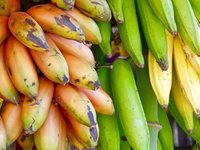 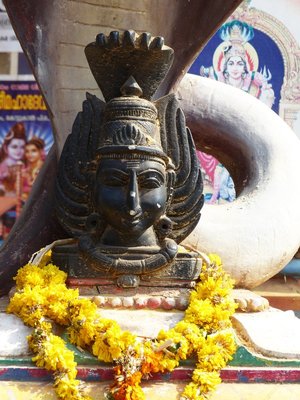 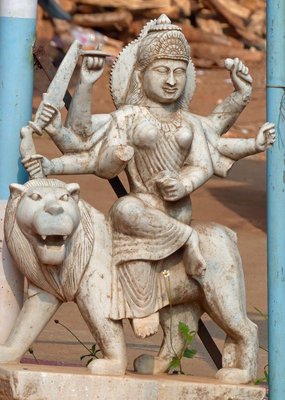 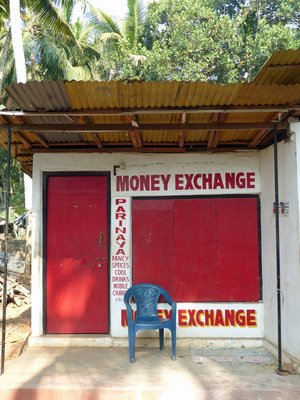 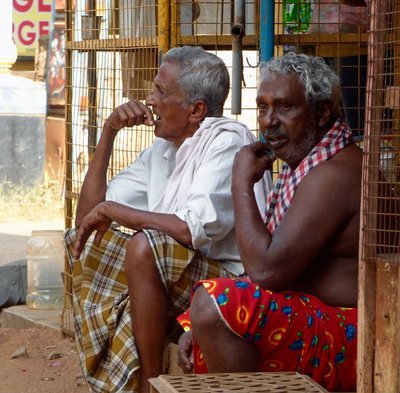 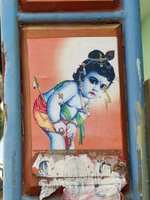 We left with mixed impressions of the Travancore Heritage Hotel. There was a lot to like here - the adaptation of beautiful old buildings, the lovely pool and grounds, the setting above a working beach full of local colour and interest, some good food in the restaurant (and for those who want it, a selection of Western dishes as well as Indian).

On the downside though, the wifi was very poor compared with other hotels we stayed at in Kerala, even though this is by no means a remote location and only a few miles from the capital. And while many staff were friendly and helpful (the pool attendants and cleaners in particular) a few were rather casual in their manner. One particular incident stands out, when I found a small piece of glass in my ice cream one evening. The blame was very firmly placed on their supplier (fair enough) but the apology was lukewarm and no compensation in the form of a discounted meal was offered. 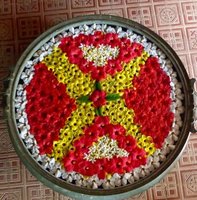 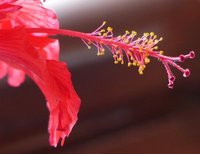 Around the hotel grounds

Nevertheless this was a relaxing spot in which to end our tour of Kerala. We flew home, after four nights here, from nearby Trivandrum airport which is modern and well-equipped to handle the amount of traffic it receives, based on our experience at least. Transfer time here from Kovalam is only about 30 minutes, so we were glad not to be flying back from Kochi where we had arrived, the best part of a day's drive away.

As on our outward journey we flew with Etihad via Abu Dhabi. This trip was our first experience of this airline and I was pretty impressed - a reasonable amount of leg room in economy, comfortable seats, pleasant and helpful service and food OK by airline standards. The layover in Abu Dhabi was about two hours - long enough not to have to rush but not too much longer.

We landed on time at Heathrow, the February skies were grey and the air decidedly cool. Already the heat of Kerala seemed a long way away …

Posted by ToonSarah 03:23 Archived in India

You came to Kovalam to unwind and your page made me feel relaxed! Just what I need with a morning coffee. :-) Pleasant read, one feels the quiet pace of things. (Probably easy for a reader to say...) I think I would have walked to Chowara often. Great people pics!

Saw your entry "Tea, glorious tea" from here and read it with interest. Thanks for the link to BBC News/Justin Rowlatt article about the woman who took on a multinational and won!

Glad you had a good trip and wrote about it. Quite a feat to do so while travelling!

Looks like a lovely trip Sarah, thanks for sharing!

Thank you both :-) Lou, I did a lot of the writing while away as this was quite a leisurely trip compared with some, but of course I tidied everything up once I got home - I'm too much of a perfectionist to blog on the move!

Love you photos of village life. Etihad have a very good reputation on long haul from Australia though I have not flown with them yet .. I have flown a number of times on Emirates their main competitor from here. They are great.