You can kill a website but you can't kill friendships

At VT Euromeets in Krakow, Bergamo, Cascais, Lviv and Karlsruhe

From June 2005 to early 2017 I was an active member of another travel website, Virtual Tourist. Over the years this had developed into a real community – not just online but also ‘in real life’. One element of this was the regular organisation of meetings between members, large and small. The latter might consist of just two members who found themselves travelling to the same destination at the same time, or maybe arranging to meet up with a local friend while on a city break. The largest meetings, on the other hand, could involve over 100 members and were regular fixtures in the calendar of many members. Among these the annual ‘Euromeet’ was one of the biggest and longest established. It had first been held in 2005 in Valeggio, near Verona, and I had first attended in 2008 when it took place in Karlsruhe, Germany, and had been to almost all of them since. 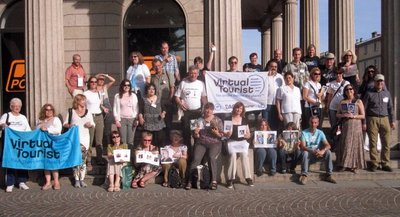 These meetings were the initiative of members, not Virtual Tourist management, although the latter encouraged and supported them, attending when they could. Each year one or several members volunteered to organise and host the meeting, devoting their own time and energy to planning a great weekend of activities for those that came. And come we did – not just from Europe but from as far afield as Canada, the US, Australia …

When the closure of the Virtual Tourist website was announced in January 2017, planning for this year’s meeting was well underway and many of us had already made travel arrangements and booked hotels. What would happen? Could the meeting go ahead without the website and without any management support? You bet it could! 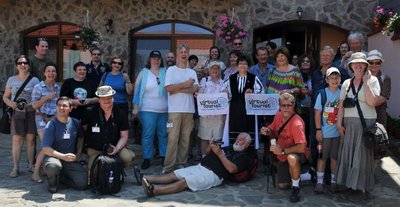 Our host Christian was quick to reassure us that he was still up for the task and plans came together much as they had always done, albeit with some communications challenges now that we weren’t all members of the same online network. In the end over 50 of us gathered in Kempten in Bavaria, from countries that included Canada, the US, Israel, Australia, England, Spain, Portugal, Iceland, Ukraine, Denmark, Switzerland, Russia, Ireland, Belgium, Netherlands, Austria, Romania, and possibly others I have forgotten. This series of blogs is devoted to our fun time together.

It has also become a custom in recent years for other members to propose and organise a ‘pre-meet’ or ‘post-meet’. This is a smaller gathering in a different but fairly nearby location either before or after the main meet, and is particularly appealing to those making a longer journey to Europe for the Euromeet. This year I joined a pre-meet in Zurich with nine other members, so that is where we must start …

I was up early on the morning of my flight to Zurich - perhaps just as well, as on checking the weather forecast I saw considerably higher temperatures predicted than I had anticipated when packing the previous day. Cue hurried removal of a couple of jumpers, to be replaced by thinner tops!

I'm fortunate to live just 20 minutes by Tube from Heathrow Airport so the journey to Terminal 5 was quick and easy, especially as on a Sunday morning there was no rush hour to contend with. After breakfast in Pret a Manger and taking advantage of the reasonably generous provision of charging points to replenish a phone battery being quickly drained by the many messages flying backwards and forwards between VT friends, it was time to board the plane, a British Airways Airbus.

The flight time was under two hours so the journey passed quickly. Approaching Zurich we had some good views of the Alps poking up above some light clouds. We landed in good weather and I was met by local VT member Sonja. We had a coffee while waiting for two others coming in on later flights, then took the tram (#10) to the centre. 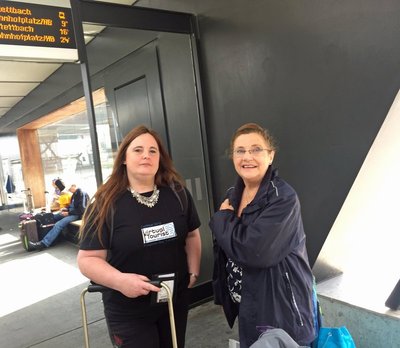 Waiting for the tram - Kirsty and Yvonne 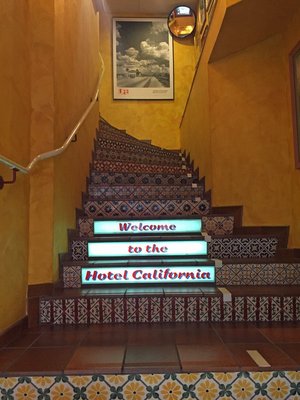 'Welcome to the Hotel California

The Hotel California where I was staying, along with Yvonne, proved to be in an excellent central location on a pedestrianised street one block away from the river. It is above a restaurant so there was a steepish flight of steps to reception where we were greeted by a friendly Slovenian girl who checked us in. My room on the second floor was not large but more than adequate, with a double bed (Toblerones on the pillows!), a small desk under the window, plenty of storage, a safe, coffee-making facilities and complimentary bottled water. The bathroom was simple but clean. The American-themed décor around the hotel was fun, with the lift painted to look like Monument Valley, paintings of diners in my room, and the colours of the south west deserts everywhere - I even had the lyrics of the Eagles' song displayed on my wall. 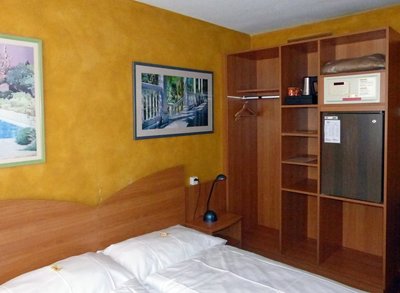 My bedroom at the Hotel California 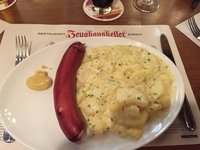 I had no time to linger however as our group of ten VTers had a dinner reservation at the Zeughauskeller, a bustling restaurant in an old (1487) armaments store which claims to have once held the crossbow used by William Tell! The service was friendly and I liked the fact that we had a large round table, making conversation with everyone in the group possible. Some of us hadn't seen each other for several years, a few had never met, while others meet up quite regularly. Regardless of these differences, the chat flowed effortlessly as it has at every VT meet I have attended. Between us we represented six countries - Australia, England, Switzerland, Iceland, Belgium and the United States.

The menu here was large (too large for easy decisions!) but as sausages seemed to be something of a specialty I chose one of those which was served with a large portion of one of my favourite Germanic dishes, Kartoffelsalat. Indeed, all the portions here seem on the generous side, which is something of a positive as prices in Switzerland are on the high side – at least I felt we all got value for money. The food was very good too, as were the Dunkelbiers I drank.

Some of us then took a walk by the river, enjoying the evening light and views of the Alps, before stopping off at a pavement café for drinks and/or ice cream - or both. A lovely start to our Zurich meeting. 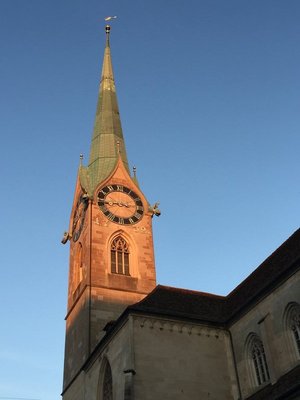 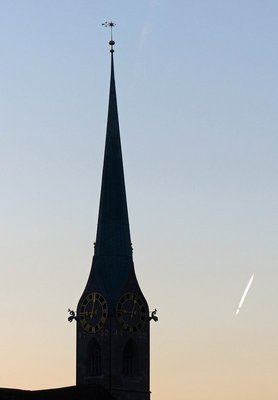 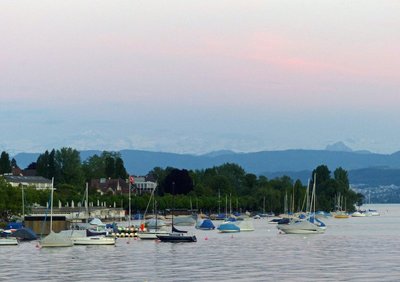 Sounds like you had great pre-meet in Zürich. Sorry I couldn't be there!

We did Don, and at the main meet too. A shame you couldn't join us this year but hopefully next time!

Dipping my toes into TP for the first time since the demise of VT. Like what I see so many thanks to Sarah Wilkie for pointing me in this direction.

Thanks for checking this out Yvonne - hope to see you blogging here too in due course!

Great start! Sarah, do you want/need the "official" Kempten 2017 group photo, the one that the bus driver took at the ski jump? It was my camera he used, so I have it... (Anyone who wants it, please feel free to contact me.)

That would be great Katherin. I have a copy downloaded from someone's Facebook page but it's very low res - it would be super to include it when I get to that day. I'll message you with me email address

I'm enjoying the account of this year's meet and pre-meet but especially delighted with the brief intro and history of the phenomenon/ magic that is VT.

Thanks Katherine - "magic" is a good word for what we have :-) It was lovely to see you again in Kempten, and here's to many more such meetings!

So good to see VT alive and well. I love Kempten. Wish we could have come. Looks like a fun group.

Zurich was an expensive premeet but worth every penny. It was wonderful to get together with old friends and also make several new ones.

Thanks Sally and Adam. Hope to see you at a Euromeet some time in the future!

Fabulous blog with brilliant photos. I especially like the headline. Very well chosen. :-)

Thanks Holger - and watch this space for more entries, including the days in Kempten in which you will no doubt feature ?

"Magic" is an excellent word - even more so as we had a true magician at the meet!

And Larry, thanks for stopping by. I agree, Zurich was worth every penny - I loved our time together there!

Thanks Ann - and more on the way!!

It's great that such a number turned out for the Euromeet this year. I look forward to reading your upcoming entries.

Indeed it is Albert - and there will be another meet next year I am sure :-) VT lives on!!

Sounds promising (and sorry that I arrive here so late).

No worries Ingrid, you are always welcome whenever you arrive!