Onwards towards the south 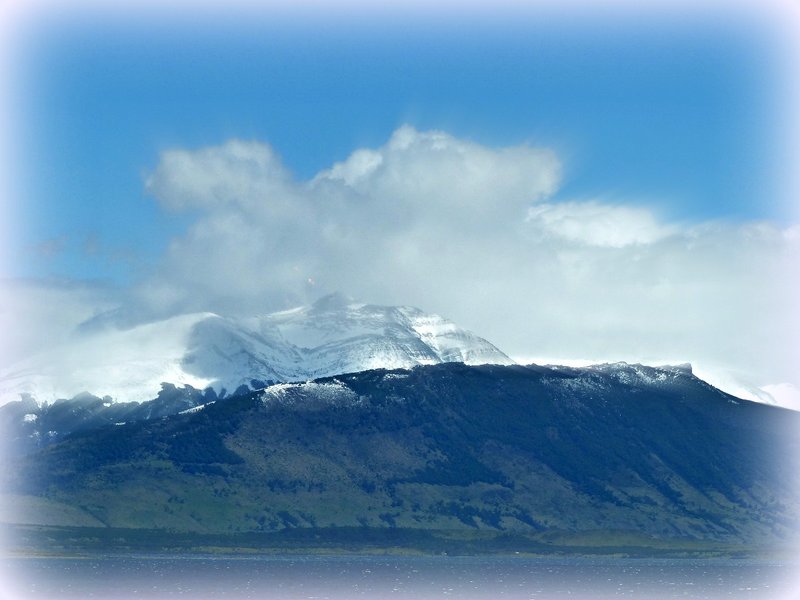 Puerto Natales was for us merely a staging post on the way to Torres Del Paine, but our one night here introduced to an architecturally fascinating and quirky hotel, and gave us our first images of Patagonia.

Getting to Puerto Natales

Our journey to Puerto Natales from Puerto Varas was not without its challenges! It started well enough with a flight to Punta Arenas with Latam of a little over two hours. The airport at Puerto Varas is small, modern and relatively quiet - a pleasure to use. The flight was uneventful, with the usual Latam snacks served (I can recommend the cheese scone as I had quite a few of them during our Chilean trip!), and landed on time in Punta Arenas. There too we found a modern and quiet airport, and were quick to collect our bags and exit the arrivals hall. 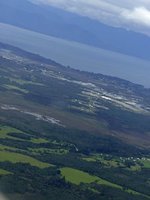 The plan then was to catch a coach to Puerto Natales which had been pre-booked for us by our travel company. We had more than an hour to wait and, knowing that we wouldn't get to our hotel until about 11.00 PM, decided to use the time to have a sandwich and beer in the (expensive) airport café. With the bus due at 20.20 we headed for the stop, as advised by the company rep, at 20.10 - but by half past no bus had appeared. So I called the travel company to check if there had been an error or a problem with the bus, and after several calls established where the problem lay. As I now understand it, the buses (operated by the Jose Fernandez company) leave the bus terminal in Punta Arenas on the hour and only stop at the airport 20 minutes later if there are booked passengers to pick up. The travel company had made a mistake and booked our tickets for travel from the terminal in town, not from the airport, and consequently the bus had passed by without turning off the main road to pick us up us. The only solution was for the travel company to re-book us on the next bus, the last of the night. So we finally left the airport at about 21.30 and after a long dark snowy drive, arrived at the bus terminal in Puerto Natales well after midnight, and at our hotel at about 00.30, the travel company having organised a late pick-up at the terminal (and a gift of a bottle of wine to apologise for the mix-up).

A hotel for hobbits? 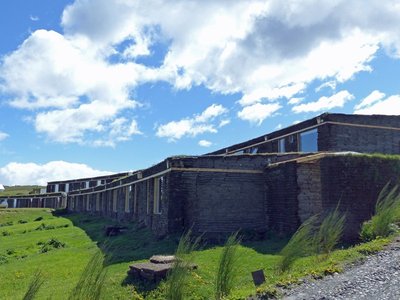 I have never come across a hotel quite like this one, at least in terms of its architecture. From the outside its sod wall construction and grass roofs give the impression of a semi-natural structure, although this is somewhat belied by the large plate glass windows overlooking the sound and mountains beyond. Inside it is a mix of timber, slate, polished concrete and chunky textiles which manages to be both cosy and stylish. The décor is fairly minimalistic, putting the emphasis on the stunning views through large picture windows.

Rooms are arranged in two tiers, ensuring that all of them have the same views. Ours had two comfortable single beds, plenty of storage space, a safe and a very hot radiator (the temperature outside was barely above freezing when we arrived but the room was actually too hot!) The bathroom was a good size with a walk-in shower offering the same great view of the mountains. The floor here is heated which is a real treat on a chilly morning. Toiletries were provided as was a hair dryer and good thick towels.

There is wifi in the rooms although it is better in the lobby area. This too has wonderful views as does the restaurant where the included buffet breakfast is served. This consisted of fresh fruit and juices, reasonable coffee, cereals, bread with various jams, cheeses and cold meats, plus eggs and sausages.

Although we spent less than 24 hours here we liked this hotel and I would recommend it, although the architecture may not be to everyone's taste and the distance out of town may be an issue for longer stays. 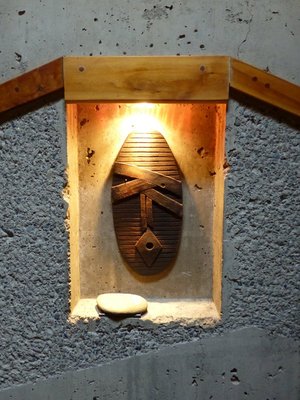 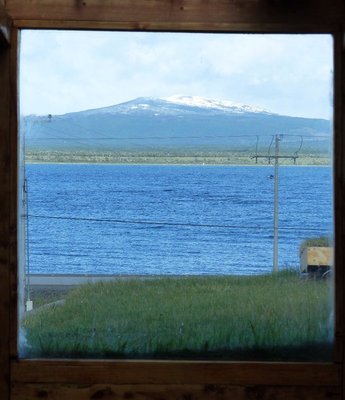 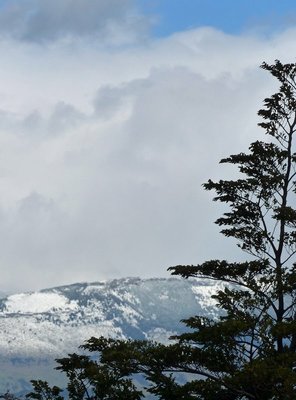 After spending the night in the Hotel Altiplanico here, we had a few hours to kill after breakfast, waiting for a transfer to the Torres del Paine National Park. Rather than explore the town, which was three kilometres away and seemed to have relatively little to offer, we decided to stay in or near the hotel. Much of the time we spent sitting in a comfortable spot off the lobby, with excellent views of the scenery outside and the ever-changing light. This led me to regularly grab my camera, pull on my wind-proof jacket and head outside to take photos. Most of those included here were taken either from immediately outside the hotel or on a short walk down the path that leads from it to the main road along the coast. Anywhere along this road would afford similar views of the narrow Última Esperanza Sound which separates Puerto Natales from the archipelago of islands that run along this part of Chile’s coastline.

This was also a good place to spot birds, including a Lapwing who spent some time looking for food on the hotel’s lawn, and a number of Upland Geese. 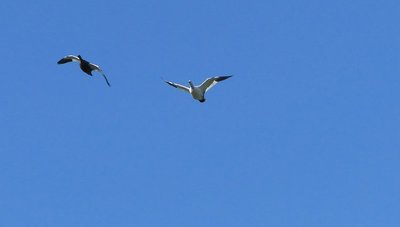 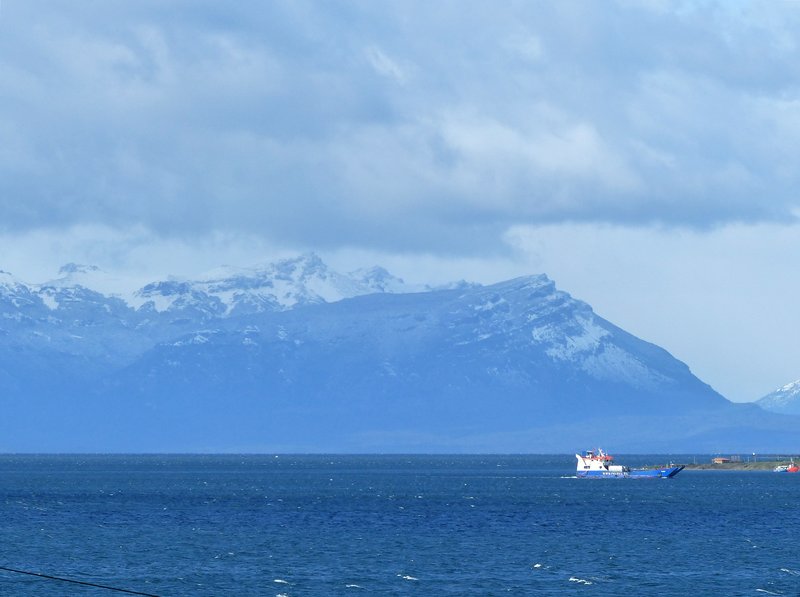 This was such a lovely setting for our first introduction to the stunning landscapes of Patagonia, and how wonderful to see blue skies and snow-topped mountains after the poor weather of the previous few days. 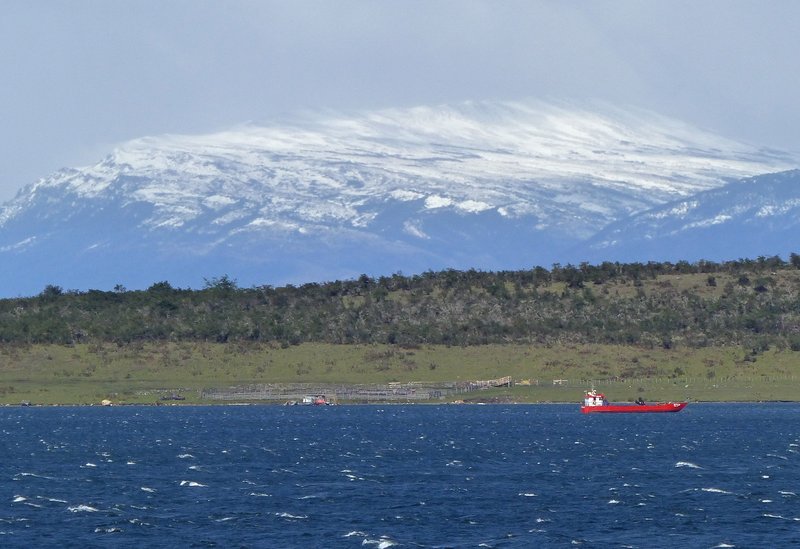