Day one in Kerala 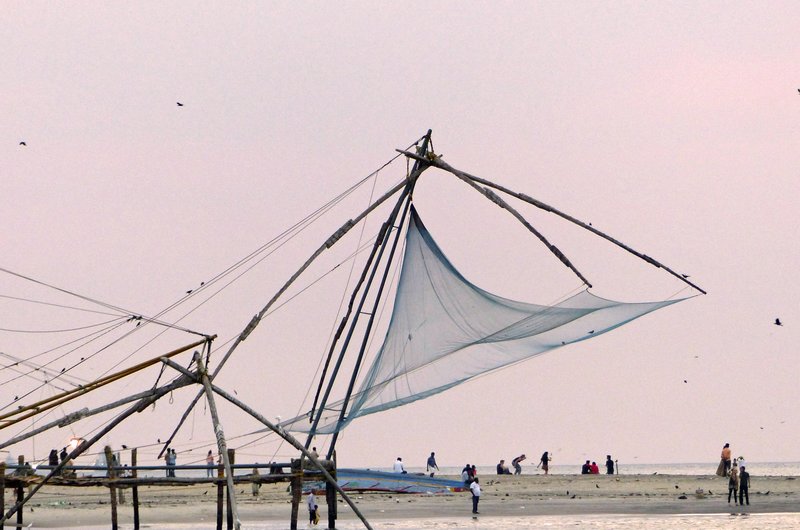 I have wanted to go to Kerala for some time and somehow this year our discussion of where to go for some winter sun evolved into a decision to follow up on our previous positive experience of booking with TransIndus and use them again for this winter's trip. We looked forward to seeing another area of this fascinating country, spending a night on one of the region's famed rice boats, and winding down with a few days at the beach.

We flew to Kerala from London Heathrow with Etihad via Abu Dhabi (there are unfortunately no direct flights between the two). Our plane for the first leg was a comfortable Airbus 380 with modern facilities such as power points and (for a price) onboard wifi. The leg room seemed more generous than in some Economy cabins and it would have been a comfortable flight were it not for the young lad in the seat behind who spent most of the journey kicking the back of mine! There were seat back monitors with a decent selection of films, and a rather fun feature allowing you see the view towards the front and below via cameras mounted on the fuselage. This was especially interesting on landing at Abu Dhabi as we had a pilot's eye view of the lights of the runway approaching.

We landed there a little ahead of schedule at around 1.00 AM Abu Dhabi time (10.00 PM London time) and it was an easy transfer process. We had less than an hour to wait for the next flight and took advantage of the airport's free and fast wifi. The next flight was in a smaller older Airbus 321, but the plane wasn't so full and there were no hyperactive children anywhere near us! Nevertheless it was hard to do more than doze as the flight was quite short (less than four hours) and the seats didn't decline at all. A meal was served but we were still quite full from the previous flight's meals and also wanted to try to sleep so we passed on this. 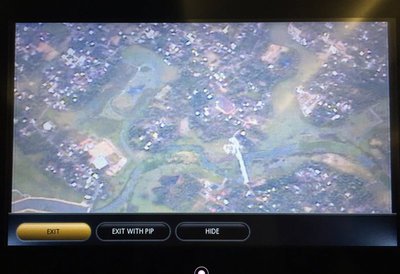 Seat-back view of the earth below


As we came into land in Cochin I again enjoyed watching the approach via the on board camera as the land rushed up to meet us. There is something about that moment, isn't there, when you pass from the life in limbo sensation of a long haul flight to reconnect with the earth beneath.

We were pleased to find relatively short queues at immigration and to be reunited with our bags. Following the advice of our tour company we changed some sterling to rupees in the arrivals hall - the exchange offices in India currently (early 2017) impose restrictions on how much you can change as they are rationing banknotes following the withdrawal last year of 500 and 1,000 rupee notes, so we were limited to £60's worth each.

As we emerged from the customs area we were met as planned by the company's representative and ushered to a waiting car. The drive to our hotel in Fort Cochin took a bit over an hour and despite our tiredness was, as always in India, full of interest. Colourful local buses, some strikingly bright white churches, an elephant in a truck (en route, we were told, to a temple festival somewhere), beautiful light over the river as we crossed from new town to old …

Just the same, we were very glad to arrive at Killian's Boutique Hotel and be told that our request for an early check in had been honoured. Time to catch up on some sleep!

This hotel occupies an old colonial building near the waterfront on River Road. We were upgraded to one of the larger rooms - it was simply furnished but spacious and comfortable. In addition to a queen size bed we had a table and two chairs set in the bay window (the view though was just of some neighbouring houses), a large wardrobe with safe and a bathroom with a walk-in shower. As well as the essential a/c there was a ceiling fan, and bottled water was provided in the otherwise empty mini-bar. There were basic toiletries in the bathroom albeit nothing fancy, and a hairdryer, but I thought two thinnish towels between the two of us was on the skimpy side. 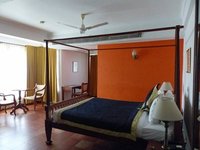 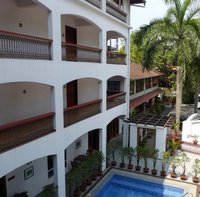 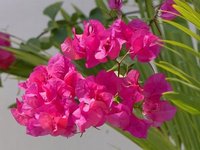 Our stay was on a bed and breakfast basis. The latter was served in the hotel restaurant that overlooks the good sized swimming pool. On our first day it was a buffet which included fresh fruit (the pineapple was excellent) and fruit juices, a selection of hot dishes (Western and Indian), omelettes cooked to order, bread and cakes. On the second morning there was no buffet (I think because there were relatively few guests) so we ordered from a menu but had more or less the same thing - a fresh fruit platter, masala omelette, toast and coffee.

A first stroll in Fort Cochin

After checking in and a much-needed nap we set off for an afternoon stroll around our immediate neighbourhood to get our bearings and grab our first photos. As you might expect in India, we only had to walk a couple of yards to find lots of photo opps - a ferry arriving from the new city, Ernakulam, across the river, egrets and other birds perched on the famous Chinese fishing nets, men shoulder deep in the water, fully clothed (doing what? Fishing for something we assumed), amusing and/or colourful signs. 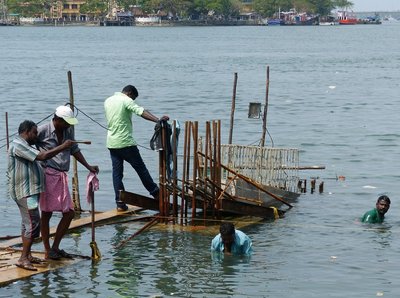 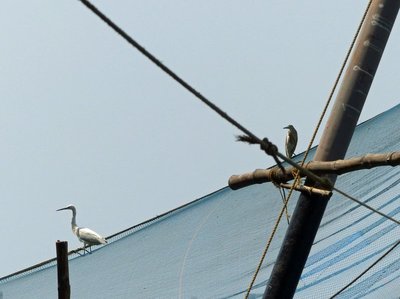 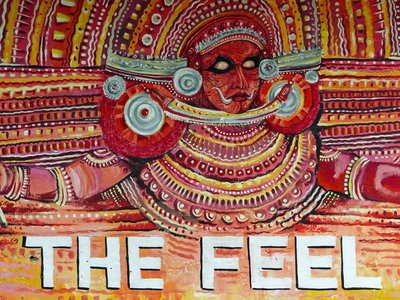 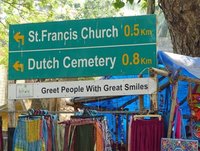 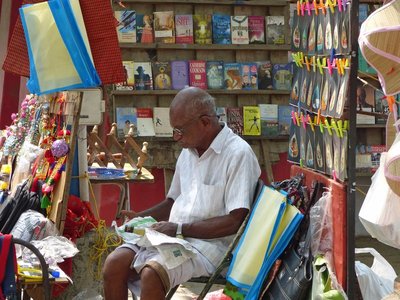 After following the river for a short distance, along the aptly named River Road, we turned and made our way to a café I had heard good things about, the Kashi Art Café. This proved to be a great spot for a late lunch, and is so popular that we had to wait about 15 minutes to get a table in one of its shady courtyards. 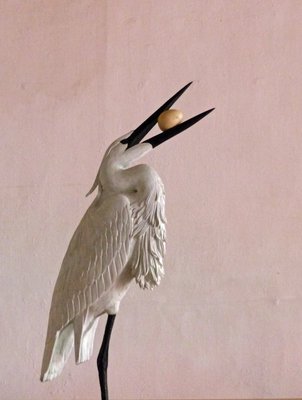 That gave us a chance to check out some of the art on display - this is both café and art gallery, and with the Kochi Biennale in full swing they had quite a lot of interest. I especially liked a sculpture of an egret with an egg in its mouth. 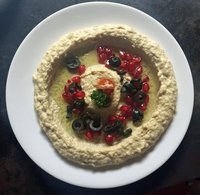 The menu here is Western and has an appealing assortment of light and more substantial dishes. I really liked my hummus which came sprinkled with black olives and pomegranate seeds and was served with doorstep slices of homemade bread, toasted and brushed with garlic butter. Chris had a herby cheese sandwich made with the same doorsteps. My lemonade with ginger was super refreshing and Chris enjoyed his fresh pineapple juice also with ginger. I finished with an iced coffee and the bill for all this was 700 rupees including service which seemed good value given the size of the portions and the quality and freshness of the ingredients.

On our first evening in Cochin we took a cruise around the harbour, the main purpose of which was to see the famed Chinese fishing nets at sunset. It was quite a relaxed low key outing, which suited us well after our long journey to get here. The tour lasted about 90 minutes, with the sunset the finale. First we pottered around the harbour for about an hour while the on board guide pointed out a few sights - old colonial buildings, some now in use as hotels; the old sea port and the new; a palace and the marina. The most interesting spots for photography were a group of colourful fishing boats and an area where the egrets and other birds were gathering to roost in the trees. 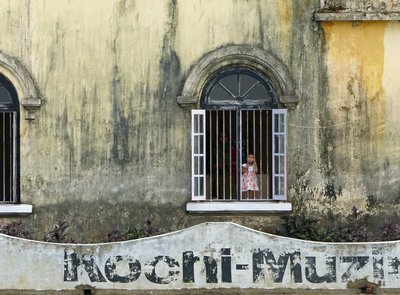 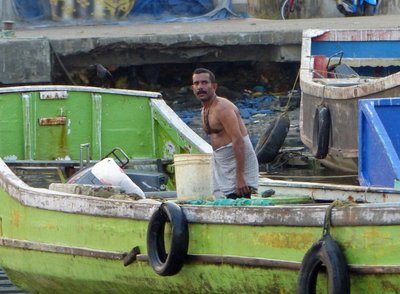 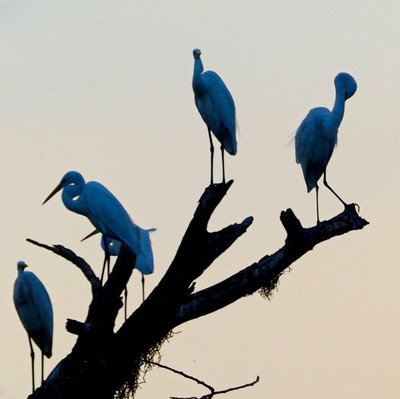 As the sun started to dip, our boat, and several others engaged the same activity, all turned towards the fishing nets near where we had started. My first thought was that they had left it too late, as this was one of those hazy sunsets when the sun disappears behind the clouds while still some way above the horizon. But in fact the pilot was spot on and we got a reasonable number of shots before the sun was lost to us. 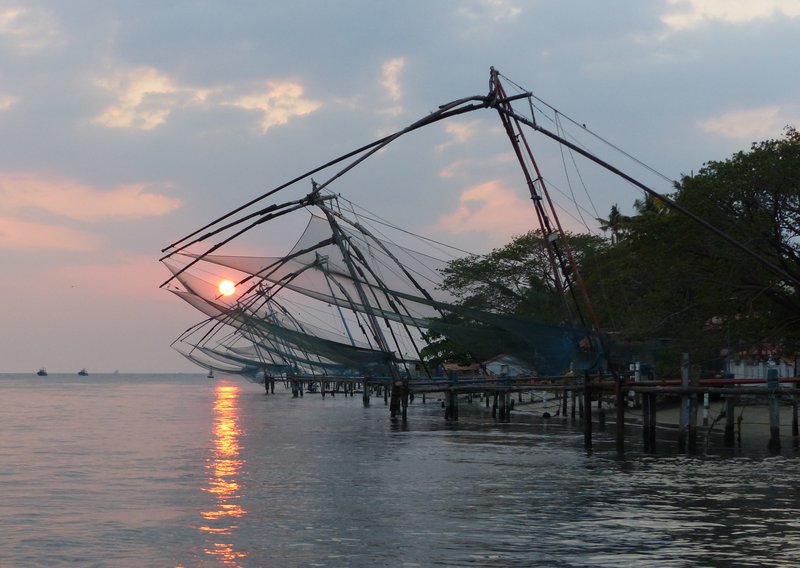 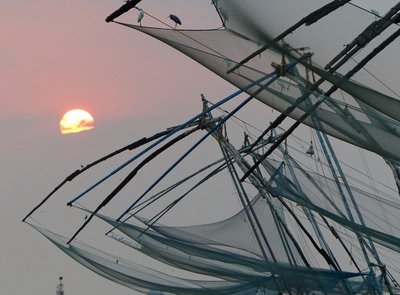 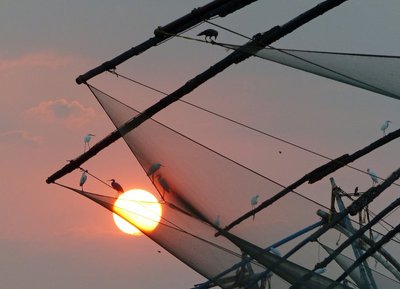 Once the sun had gone we, and all the other boats, headed back to the quayside and there was some jostling for position before we were able to disembark. It had been a pleasant outing and, as I said, one well-suited to our weariness.

After our sunset cruise on our first evening in Cochin we realised we were too weary from travelling to venture far for dinner, and having read some reasonable reviews of the restaurant here on our doorstep we decided it would suit our purpose well - which it did. Like everyone else dining there that evening we sat outside on the terrace where fans kept the temperature just right - warm enough to be sure we were on holiday but not so hot we couldn't fancy eating. 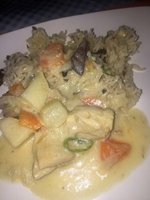 We kept the meal simple, sharing a couple of Kingfisher beers (beer and wine are both sold here, unlike many Cochin eating places), some mushroom pilau rice and a very tasty chicken dish, Chicken Mappas, with a coconut sauce flavoured with fennel seeds and cashew nuts.

I'd read a few reviews that criticised the slow service but we felt it was just right, and both friendly and helpful. However had we arrived just after the group of 20 Italian tourists seated nearby, rather than just before, we may have had to wait longer I guess. Prices are very reasonable too, and we paid just 1,500 rupees(less than £20) for our meals and two large Kingfisher beers. The photo of the terrace below, by the way, was taken the next morning when it was light enough to do so.