With a midday departure from nearby Heathrow the start of our journey to Cambodia should have been easy, but weekend engineering works on the Piccadilly line of the Tube added a complication. We could have taken the substitute bus service provided by Transport for London but with suitcases to handle we opted instead to take a minicab.

We were at Terminal Two in good time (I hate to cut things fine when flying, or indeed when doing anything else) but long queues at the bag drop desks meant there was just time for a late breakfast before we had to head to our gate. We were flying to Phnom Penh via Bangkok with Thai Airlines so had a long (11 hour) flight ahead of us. Fortunately we left on time and were soon informed by the pilot that with a good tailwind we would have a slightly shorter flying time of 'just' ten and a half hours.

This was our first flight with Thai and I had relatively high expectations based on their reputation, which were on the whole met. Our economy cabin seats had more legroom than on many planes these days, service was friendly, the food better than average for airplanes. I would perhaps have welcomed a wider selection of recent films however, and I found the cabin temperature a bit low - I was glad I had a thin pashmina in my bag!

We were served a meal soon after take-off (lunch or dinner, depending whether your head was on London or Bangkok time) - a tasty Thai spicy chicken dish and a rich chocolate dessert. Immediately afterwards the cabin lights were dimmed, so I guessed we were supposed to be on Bangkok time, but as it was only early afternoon in the UK we certainly were not. So, I found a film I did want to watch, Once Upon a Time in Hollywood, which occupied the next few hours rather well. By the time it finished we were over halfway there.

I read a bit, chatted to Chris, went for a couple of short strolls up and down the aisle to stretch my legs. Time passed, albeit slowly. Two hours or so before we were due to land, at about 9.00 PM UK time, the cabin crew passed through handing out hot towels, with a cheerful 'good morning', soon to be followed by breakfast, messing somewhat further with my body clock.

It had more to deal with shortly, as we landed in early morning Bangkok just as we would usually have been heading to bed in London! We had to go through a security check but no other formalities. We were struck immediately by the large number of people wearing face masks, no doubt due to the coronavirus outbreak that had recently started in China, and despite the fact that medical experts say that these provide no protection.

We picked up a coffee from a branch of Dean & Deluca but didn't stop to drink it in the café as we weren't sure how far it was to walk to our gate and even with the early arrival we didn't have a lot of time to spare. It turned out to be a long walk (my phone measured it at over a mile) so our coffees were barely lukewarm by the time we sat down to drink them at the gate, and as were to find out a few days later, they proved to be rather expensive coffees!

A red sun was rising over the airport but I still found it hard to get my head around the fact that it was now tomorrow! 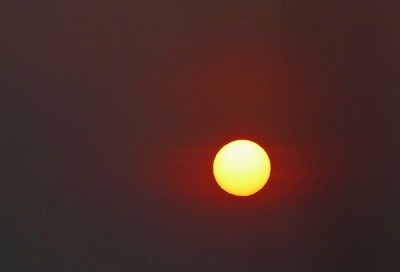 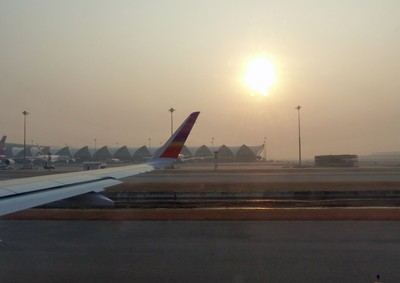 Taking off from Bangkok Airport