Farewell to the Democratic People’s Republic of Korea

DPRK (and Beijing) Days twenty and twenty one

Our tour was over; time to leave Pyongyang and fly back to Beijing on the first leg of our journey home. After a quick breakfast at the Koryo Hotel we said goodbye to our young student guide who wasn’t coming to the airport and loaded ourselves and our bags on to the bus for one last time. The drive to the airport gave us a last opportunity to watch the people of this unique city as they hurried to work or school, waved flags, directed traffic, queued for buses, etc. etc. 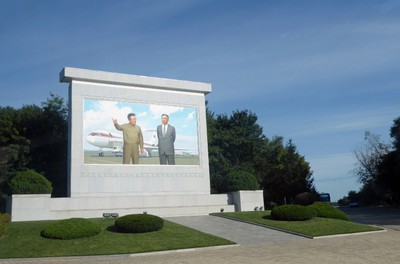 At the entrance to Pyongyang Airport 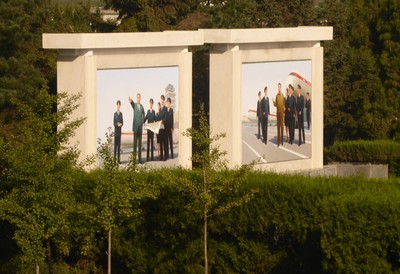 
At the airport our guide helped us fill in the exit and customs forms and to check in. Then it was time to say our farewells to her and thank her for her help, her company and her patience with our occasional struggles to understand the regulations of this country. If we had been visiting anywhere else, it would be at this point that I would be thoroughly recommending her as a guide, but since it isn’t possible to choose which guides you are allocated on your tour of North Korea, and also since I have been asked not to name any of our guides in this blog, I will simply say that we all felt very lucky to have been guided by her.

Customs and security were quickly passed, with no checks on anyone’s cameras, as far as I could see, so our anxieties on that front had been unnecessary. There was only a short wait in the lounge before boarding - just time to buy a locally published guidebook in the gift shop to compare with my trusty Bradt guide. It was interesting to read how in places it described the sights rather differently, and it also covered some that were omitted from Bradt, especially the less obvious tourist destinations. 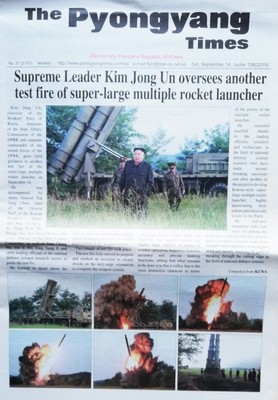 I was a bit disappointed to have been allocated an aisle seat on the plane, but in any case no photos were allowed, even when over Chinese airspace – a flight attendant was watching us all very carefully! On the plus side we managed to secure a copy of this week's edition of the Pyongyang Times, completing our set. Today's headline was all about the test firing of a 'super-large multiple rocket launcher', overseen (of course) by Kim Jong Un. He 'said that the weapons system has finally been verified in terms of combat operation, trajectory features, accuracy and precise homing functions'. And naturally he offered guidance:
'He indicated immediate tasks and ways for putting the production of the Korean-style tactical guided weapons including super-large multiple rocket launcher on the highest level and steadily attaining the goals of breaking through the cutting edge in the field of national defence science.'

I was also rather taken by an article on page two headlined ‘Genuine features of DPRK’, in which the paper drew attention to various aspects of the country for the education of tourists, including:
‘The true features of the DPRK are that it is a country in which the people-first principle is fully embodied. This principle embodies the Juche-orientated revolutionary philosophy that the people are the most precious and powerful beings in the world and reflects the unwavering commitment of the DPRK government to love the people dearly and satisfy their demands and interests.’
And:
‘As the Party and state activities are thoroughly directed towards the good of the masses of the people, the people do everything without condition and devotedly implement the Party’s policies’

We were served a cold drink and the same sandwich combo we received on the way out to Pyongyang - spam, cheese and cream cheese with cucumber on bread reminiscent of the diet breads (such as Nimble) that my mother used to buy years ago!

We landed on time in Beijing and took a long time taxiing to the terminal. After that everything went smoothly. We said our final goodbyes to most of the others from our group, and to Carl, as we were staying in a number of different places tonight (or in the case of one couple, flying straight on to Manchester without an overnight stay). We then caught the free shuttle bus to our airport hotel, the Hilton - we had decided that with such a relatively short stay in Beijing we wouldn’t bother with a city centre hotel but would just unwind and hopefully get back online after our enforced isolation of the past 17 days!

We were able to check in straight away, although to do so we had to settle for two small double beds rather than the king we had booked. 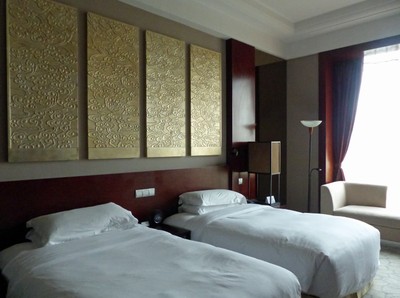 Our room at the Hilton Hotel


We had lunch in the ground floor bar, enjoying the ‘novelty’ of choosing from a menu and having Western options available - we both chose a Croque Monsieur (I was craving cheese!) and grapefruit juice (ditto fresh fruit!) 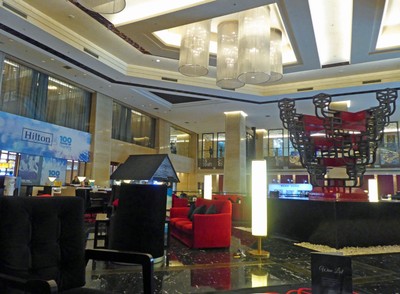 
After lunch we tested out the Internet services to see what we could access. No Facebook, obviously, but disappointingly I couldn’t get into my emails either, despite having been able to do so when staying at the Grand Hyatt in the city centre at the start of the trip. Oh well, one more day of isolation wouldn’t hurt me!

Good WiFi has been one reason for booking this hotel, as we knew we would want to use the time to catch up on what we had missed over the past two and a half weeks, so it was a bit frustrating, but despite the challenges with accessing emails etc. we decided to stick with our plan of a lazy afternoon at the hotel rather than travel into the city centre for a last few hours of sightseeing. In the evening we had dinner in the ‘international restaurant’ (shunning the two Chinese ones available to us), where we bumped into Pam, one of our fellow North Korea travellers also overnighting here, so we joined her for a final chat over pizza!

The next morning we had a leisurely buffet breakfast in the same restaurant, enjoying the wide choice and availability of fresh fruit, juices and other goodies that we hadn’t seen on our tour!

We checked out mid-morning and took the free shuttle bus to Terminal Three. I had read that this is the largest airport terminal building in the world, and it felt like it! The queue at the Air China desks was very long but well-managed and we got to the front eventually and were able to drop off our baggage. Passport control and security were also very busy, so we were glad we’d allowed plenty of time.

Once through we got a coffee from a Costa stand (finding it still odd to see familiar brands after the isolation of North Korea) and browsed the shops, buying some chocolates for my sister and family and a pretty bangle for myself - all the unspent Yuan we’d carried all over the DPRK were burning a hole in our pockets!

We boarded on time and settled into our fairly cramped but acceptable economy seats (we almost never spend money on flights that could better used on the trip itself!) 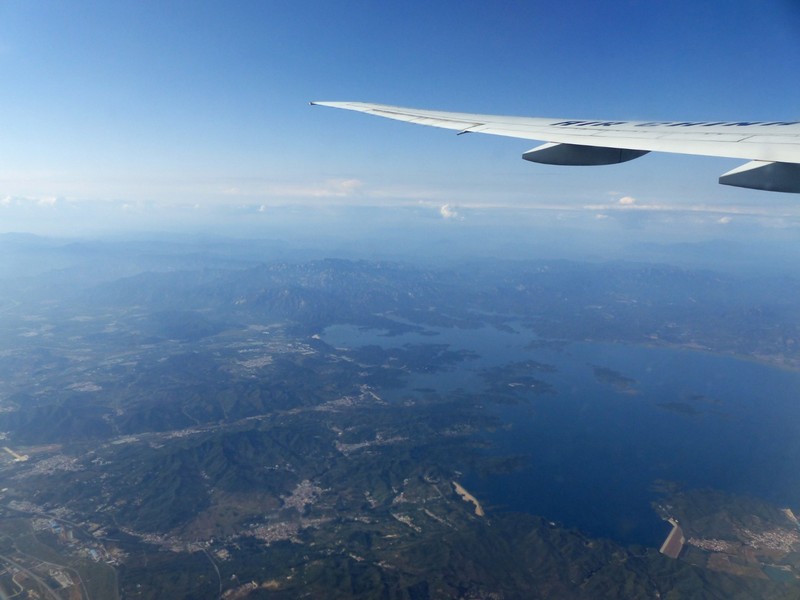 The flight home was uneventful - a film (I caught Capernaum, which I had missed at the cinema - very good), some mediocre food, reading, more mediocre food, and landing five minutes early at Heathrow. Everything went smoothly there and we caught the Tube home, arriving only a bit over an hour after touch down. The end of an amazing trip! 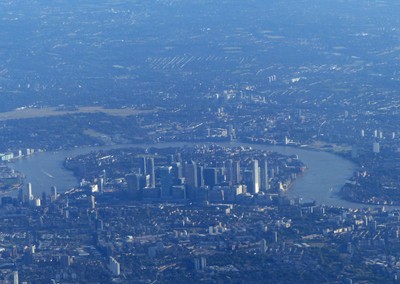 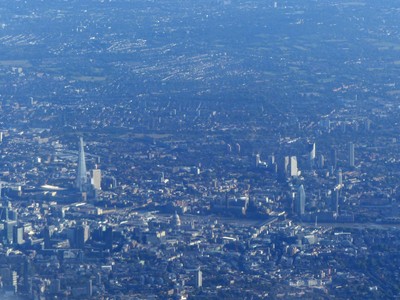 Flying into Heathrow over London

So am I glad I went to North Korea?

You bet I am! Yes, there were a few privations along the way (those hard beds and some dubious plumbing) but these were outweighed a thousand-fold by the pluses. The latter include the opportunity to see for myself a country so often talked about but so little understood. And while of course I saw only what our hosts wanted to show us, nevertheless I feel I have developed a greater understanding of what has made North Korea what it is today. This isn’t to overlook or condone the flaws in their political system and leadership, which I think are pretty well documented. But if you look beyond those you see a people who by and large want what people everywhere want – a roof over their heads, the ability to access healthcare when they or their families need it, a good education for their children and a safe future for their country.

And the visit also enabled me to appreciate that the DPRK system didn’t spring out of nowhere but has been shaped by past events in the region, in some of which our own countries may have been culpable. 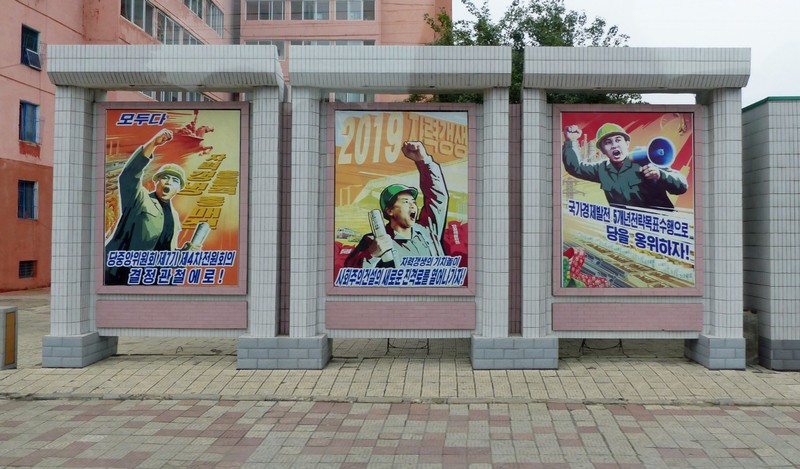 The North Korea you expect ... 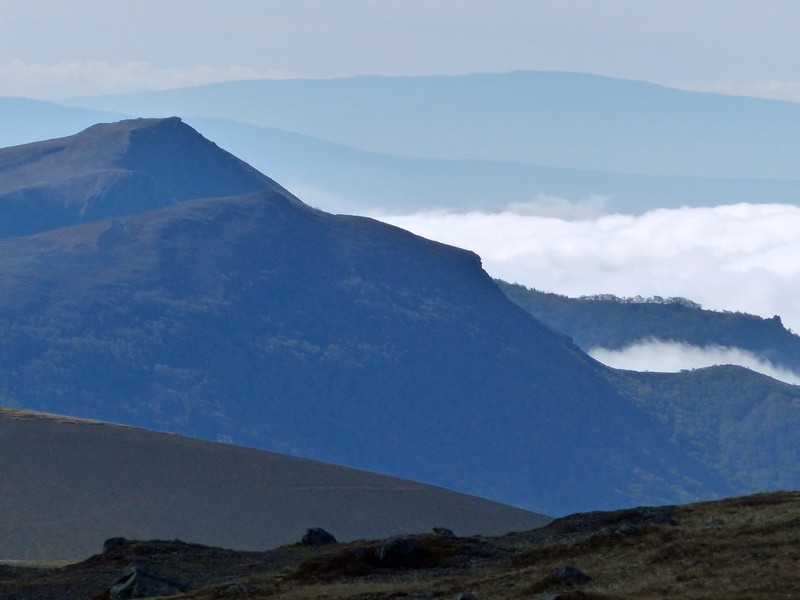 Ooh, that’s getting heavy! History and politics apart, this was also simply a fascinating, varied, busy (sometimes too busy) look at a country very different from my own, and that’s what I look for in a holiday. The highlights for me, apart from the above and in no particular order, were:
~ the grand monuments in Pyongyang and elsewhere;
~ the beautiful scenery (especially the roads lined with flowers against the lime green paddy fields);
~ our time on Mount Paektu;
~ The Victorious Fatherland Liberation Museum in Pyongyang (yes, I’m surprised too that this is on my highlights list!);
~ the Mass Games;
~ the kindergarten in Chongjin;
~ the barbecue on the beach in Wonsan and the one at the Hyangsan Hotel in Mount Myohyang;
~ the International Friendship Exhibition;
~ going up the Tower of Juche in Pyongyang;
~ flying in Kim Il Sung’s Ilyushin Il-18D;
~ the Kumsusan Palace of the Sun;
~ and travelling with a great bunch of largely like-minded companions, while being looked after by guides who know their stuff and are also very good company!

Will I go back? Probably not – we don’t tend to revisit places (with one or two easy to reach exceptions, such as Paris) and there are still so many on my wish-list. But would I recommend a visit to anyone else? For sure, as long as you’re happy to accept that you will see an edited version of the country, to be constrained in what you can do or see, to manage without phone or internet access for the duration, and to follow the relatively few rules that will be imposed.

I have to finish with a big thank you to Carl Meadows at Regent Holidays, who has patiently read my drafts of every DPRK entry in this blog to ensure that I wasn’t overstepping the mark in any of my comments about the country and our experiences there. At the same time he has provided additional facts and details that have added, I hope, further interest to my ramblings!

This blog should not be seen as a fully balanced picture of the country as it has focused primarily on what I personally saw and heard while there. I have done my best to reflect the experiences I had as presented to me by our Korean guides, although I may have touched from time to time on other perspectives. In writing it I hope always to remain respectful of my hosts, and to tempt my readers not to take my word for anything, but to visit and make up their minds for themselves.

Having said that, all views expressed above and in all my entries are my own, and I alone am responsible for the content.