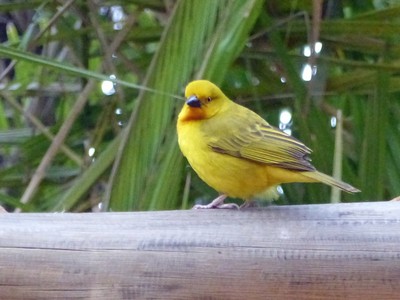 It was time to say goodbye to Xugana Island. The lodge usually tries to arrange an activity for guests on their last morning, but our flight was scheduled for 9.05, too early to fit anything in, so instead we had the luxury of a ‘lie-in’, with a wake-up call at 7.00!

We enjoyed a relaxing breakfast, with time to take a few final bird photos around the dining area and deck. The bulbuls in particular were very tame and regularly came inside to look for titbits, while the swallows had their nests under the roof. Others, like the weavers and starlings, were a bit more shy and restricted their foraging to the deck areas. 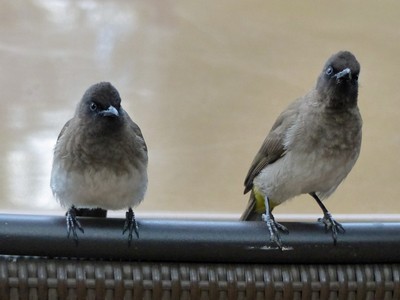 We chatted over breakfast to Donna and Steve, who were leaving on the same flight, and were joined towards the end by the other members of our now-close group, Areti and Glen, whose flight down to Maun would be later that morning. But at 8.30 it was time to say goodbye to them, and to all our new friends at Xugana - Slade (our excellent guide), Bones, Promise, Clifford, Rosa and all the management staff. We piled into the motor boat for the last time and were waved off in true Xugana fashion, to the beat of the drum.

After a short ride we were back at the airstrip where we had arrived just three days before. The plane landed about ten minutes later, but not before we had spotted one last elephant among the trees in the distance. 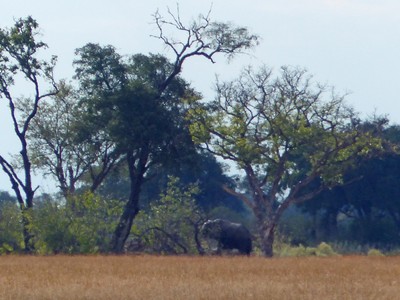 Elephant near the airstrip 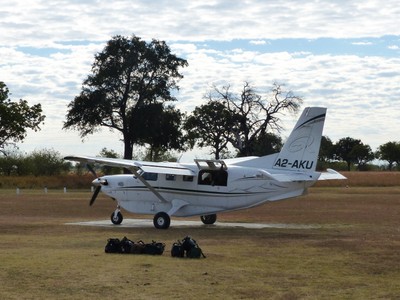 Our plane on the airstrip

Flying back to Kasane

This was an even smaller plane, a Kodiak seating just eight people, all in single window seats. Soon after we took off I managed to get a photo of a couple more elephants among the tall papyrus of the delta. 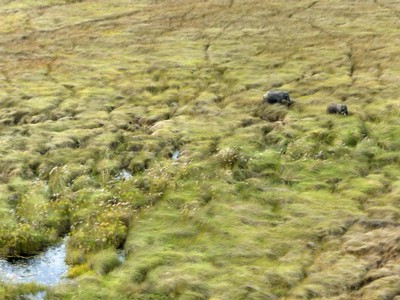 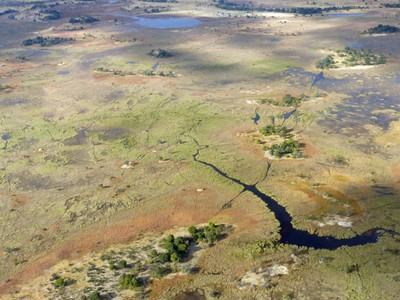 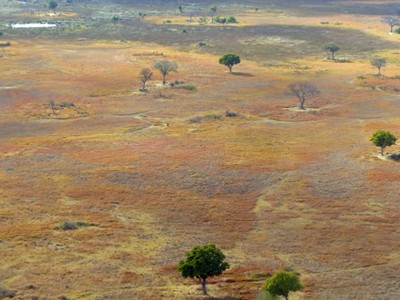 Flying over the Okavango Delta

At first it was just the four of us, but after about half an hour we touched down at Savute to pick up two more passengers. I loved the sign at the airstrip here! 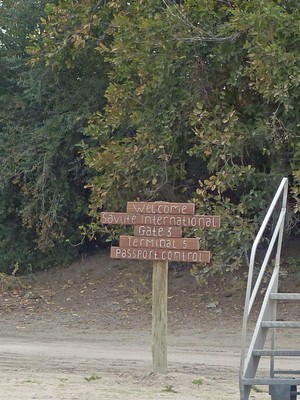 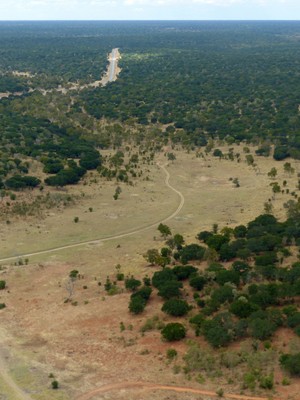 Savute airstrip, and view near Kasane

The time passed quite quickly, with lots to look at out of the window, although the light was less good for photos than on the outward journey. 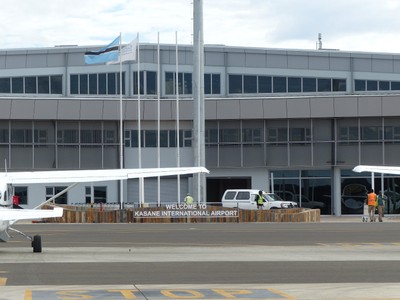 We landed at Kasane and were brought our bags within minutes - if only all flights could be like that! We said goodbye to Donna and Steve, who were headed for Chobe Game Lodge where we had stayed before Xugana, and promised to stay in touch and to meet up some time in London. Then we set off for the border with Zimbabwe with Elvis, the driver who had met us at the airport. He helped us with the formalities both in leaving Botswana (a matter of a few minutes and limited fuss) and in entering Zimbabwe (a long wait in a slow-moving queue to pay $55 each for a visa).

We were then passed on to a second driver to take us to our hotel in Victoria Falls. On the way we stopped off at the offices of the tour company (Wild Horizons) as we wanted to change our booking for a short helicopter flight over the falls into a longer one, on Areti’s recommendation. It will cost quite a bit more on this already expensive trip but I think should be worth it! 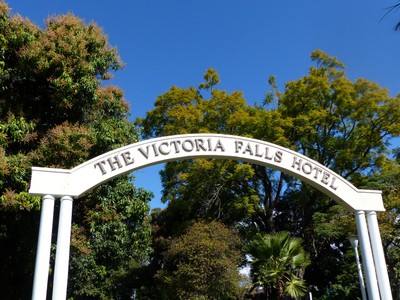 Welcome to the Victoria Falls Hotel

When we booked this trip through Real Africa I queried whether the cost could be reduced by staying a more modest hotel here, but Paul, who organised our itinerary, told me he had a special arrangement here and could get it for a similar price to a three star in town - so of course we went for it! And you couldn’t really find a much great contrast to Xugana Island. The latter is small, intimate, rustic and blends well with its environment. The Victoria Falls Hotel is imposing, historic and on a large scale.

But we received a friendly welcome from the doorman Duly - a real character, with an impressive collection of pin badges from around the world (gifts from hotel guests, I assume). 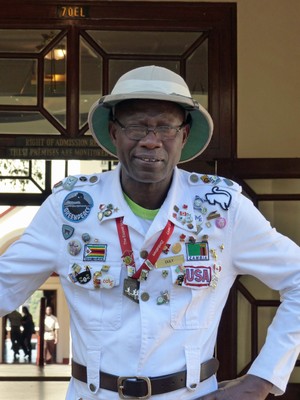 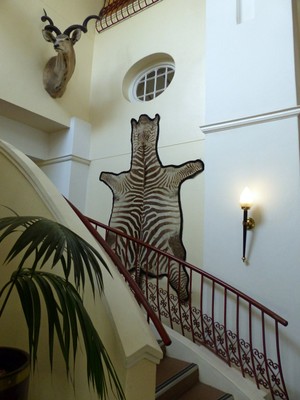 Duly, the doorman, and stairs to our room

We were able to get into our room despite being over an hour ahead of check-in time. We were pleased to find that we had a room on the first floor at the rear, overlooking the gardens and with a sideways view of the spray from the falls. The room was very traditional in style (lots of dark wood) and again a complete contrast to what we had left behind that morning - not least in being considerably warmer! 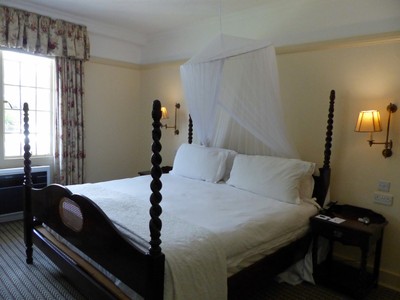 Our room at the Victoria Falls Hotel 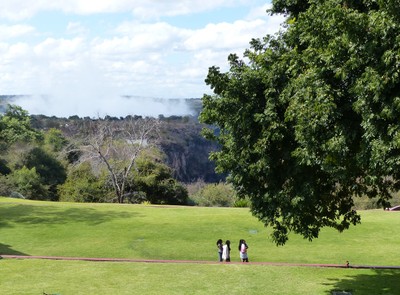 View from our bedroom 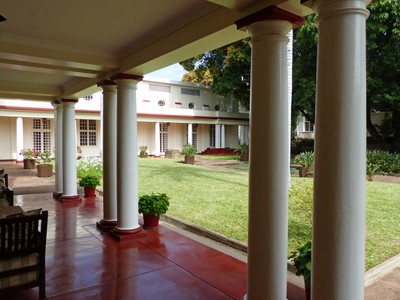 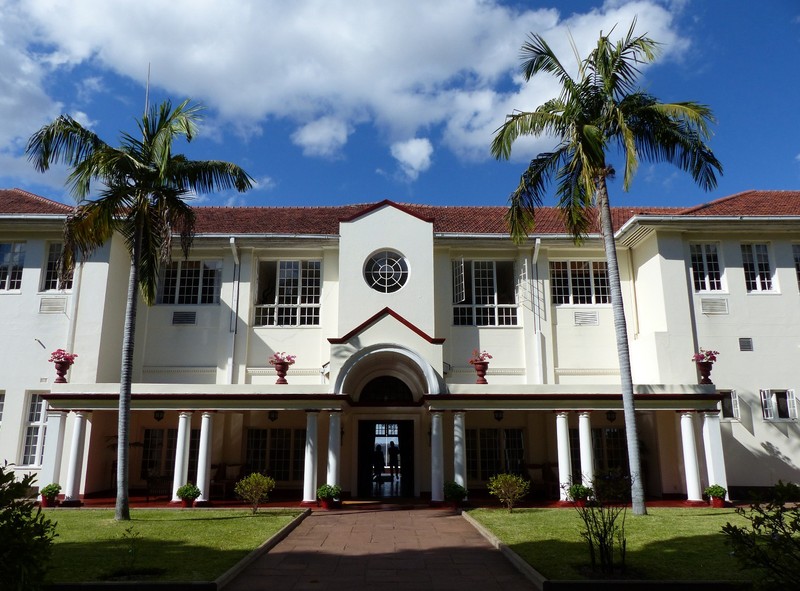 Gardens in the central courtyard 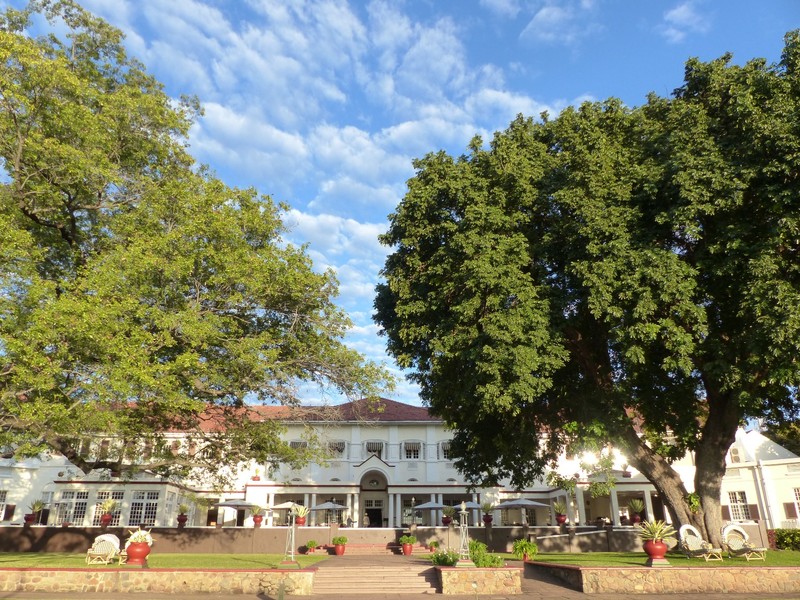 Victoria Falls Hotel from the grounds
Our room top right behind the tree, and Stanley's on the terrace in front

By now it was lunch time so we went down to the terrace bar/restaurant, Stanley’s, and had some sandwiches. We then took a walk along what is described as a private path leading to a viewpoint of the Falls. We did come to a good spot from which to see the bridge and gorge, in the Lookout Café part way along the path, but at the path’s end we found that we were at the entrance to the Falls, where visitors must pay the national park fee to enter. We didn’t want to do this as we had a tour pre-booked for tomorrow with park fee included, so disappointingly we had to retrace our steps without getting our anticipated first glimpse of the waterfall. 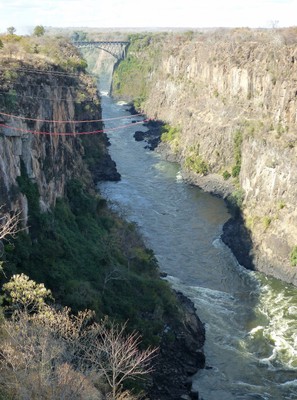 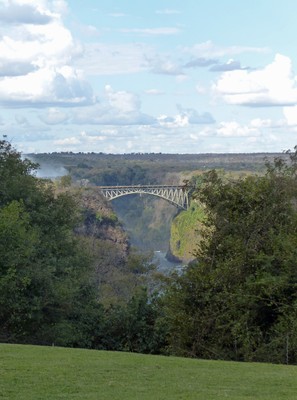 View of the gorge from the Lookout Café, and from the hotel grounds 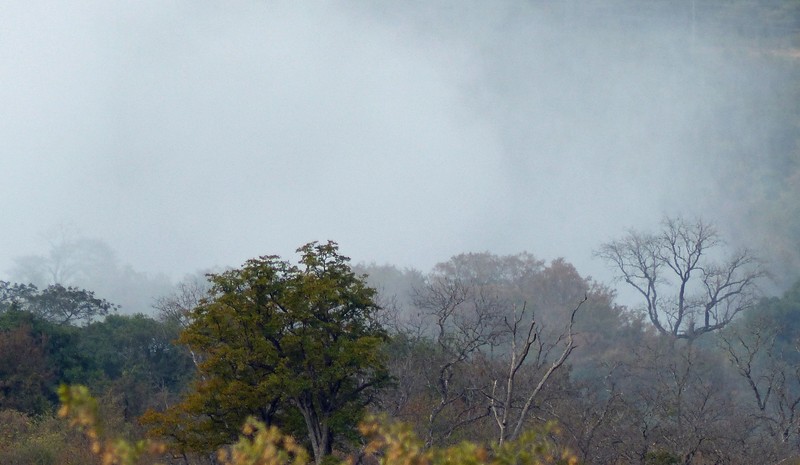 Spray from the falls seen from the hotel

When we got back to the hotel we sat for a while in the garden, enjoying the view of the spray, before going back to our room to use the free WiFi for a much-needed catch-up with emails, messages and what was going on in the world!

In the evening we went for a drink in Stanley's bar, named of course for he of the famous ‘Dr Livingstone I presume?’ comment. We had dinner in one of the hotel’s two restaurants, the Jungle Junction, which was included in our half-board package. We did however have to pay for all drinks - a bit of a shock after the free (and free-flowing) drinks at Chobe and Xugana! I’m not a fan of buffets, other than at breakfast time, but the food was of a pretty good standard, if unexciting, and the show of African singing and dancing was enjoyable. 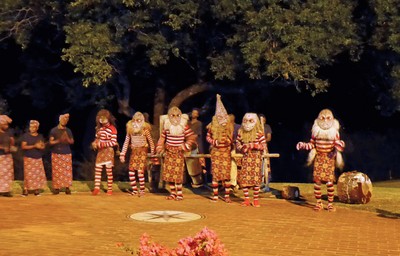 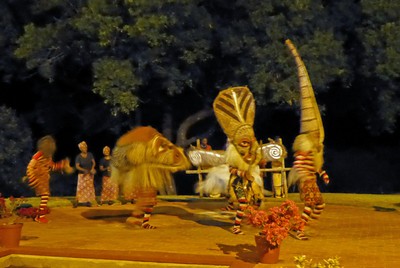 Evening entertainment at the Jungle Junction

Back in our room we went to bed with the sound of the falls as a background noise. This really is, as the native people call it, ‘The Smoke that Thunders’.