Feats of engineering - and shooting!

After our lunch in Pyongyang we were off to Nampo for the afternoon. Our itinerary had originally included an overnight stay in this port city, with a morning boat ride on the Taedong to visit the West Sea Barrage. That plan had fallen foul of the weather, but it was still possible to do this shorter afternoon trip just to see the barrage, of which the North Koreans are incredibly proud.

The road the children built

Our route took us along the Youth Hero Highway, which is one of those bizarre ‘only in North Korea’ sights. Not that this is the only country to have a wide road linking two cities, nor the only one in which such a road is so poorly surfaced and so little used. What is special about this particular road is given away by its name – this is a motorway built by children and young people ‘volunteers’ during the late 1990s. I have to admit that I found myself wondering why they couldn’t have been taught how to create a smoother surface for driving, as our bus zigzagged across the almost-deserted lanes (five in each direction for most of its length) in an often vain attempt by our lovely driver to spare our backsides! 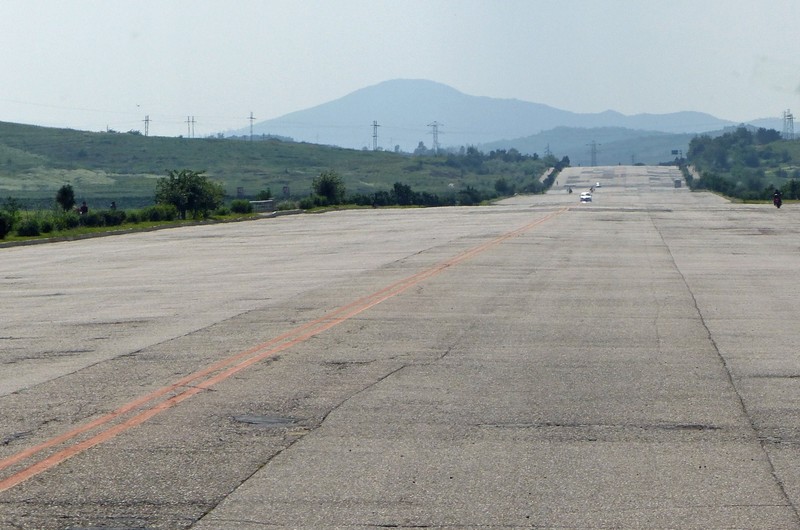 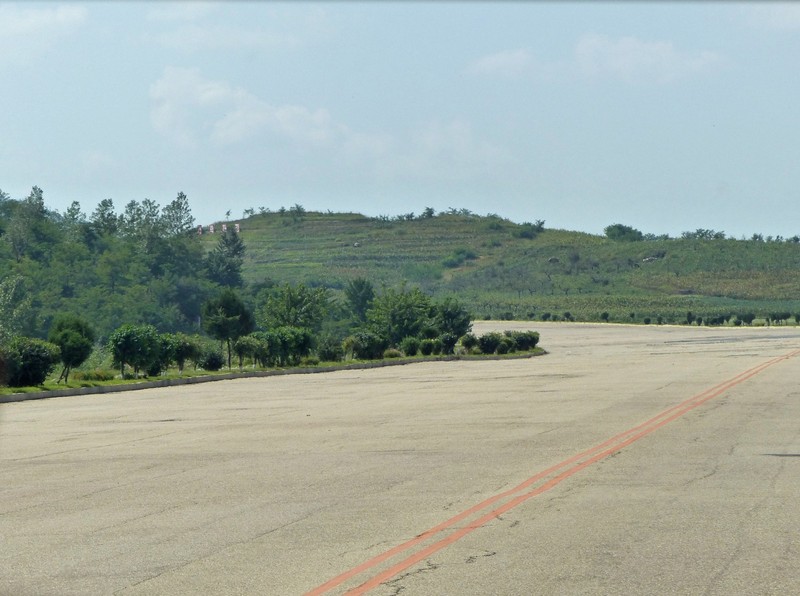 Of course the road is over twenty years old now, and I’m told that when it was first built it was much smoother, so I am probably being unfair to the children and should blame lack of ongoing maintenance rather than their poor road-building techniques!

Anyone who has read my earlier posts will have learned how the Koreans love to incorporate numeric symbolism into the constructions, usually related to the lives of the Kims. Some reports suggest that they have done so with this road, giving its length as precisely 42.216 kilometres; 42 symbolising the year 1942 and the 216 the 16 February, thus 16 February 1942 – the date always given here for Kim Jong Il’s birth, although non-Korean sources will tell you it was 1941. 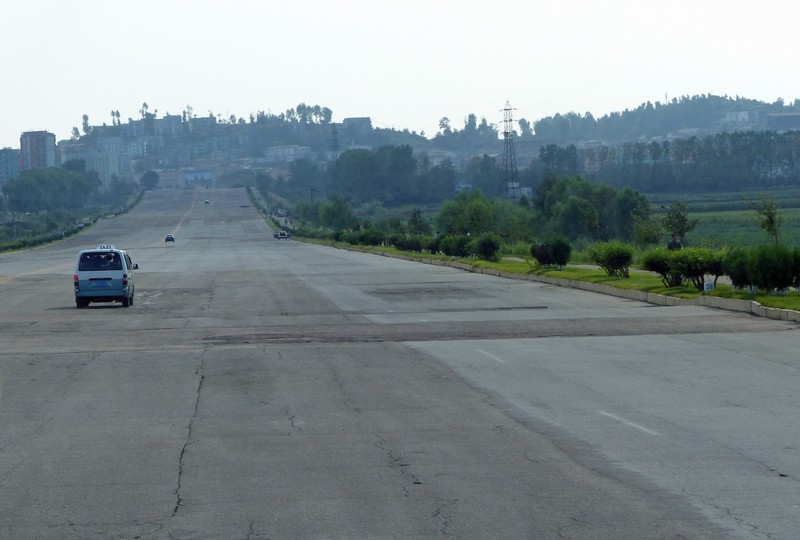 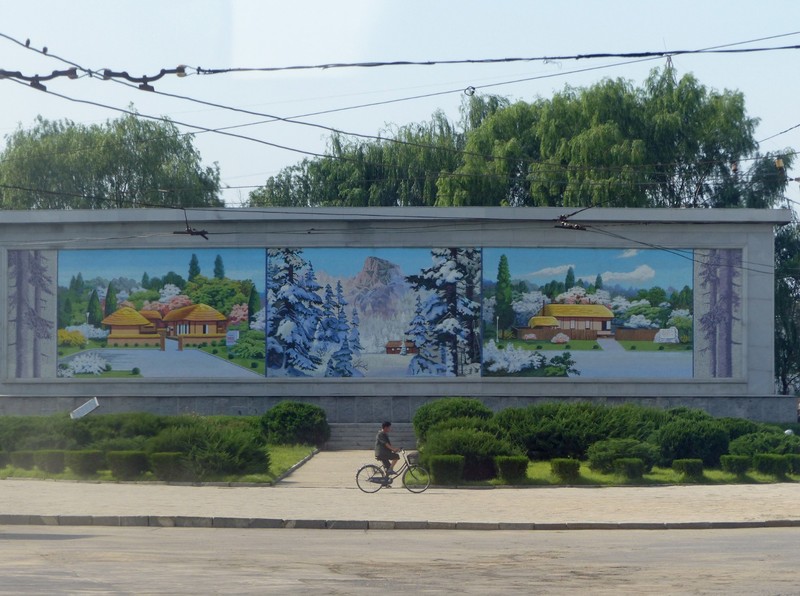 On the outskirts of Nampo

We drove straight through the centre of Nampo and out past the docks on the north bank of the Taedong River. As we approached the river mouth we saw salt flats on either side of the road. 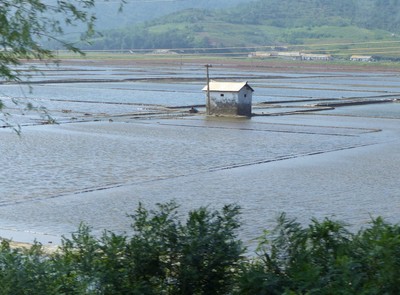 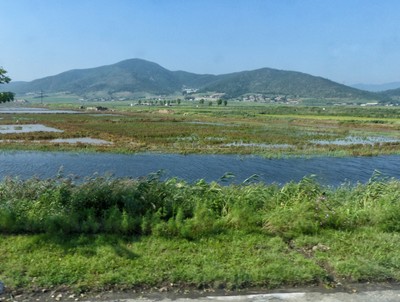 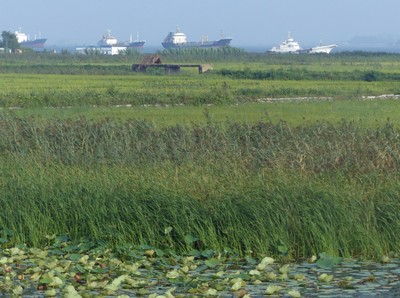 The view towards the port

The North Koreans are extremely proud of the engineering feat that is the West Sea Barrage, as much for the speed of its construction as for the structure itself. It was built in just five years from 1981 to 1986 at the behest of Kim Il Sung, as our local guide was to tell us, the pride very evident in her presentation.

We drove out along the barrage to the southernmost of the two islands that were incorporated into it, Pi Island. On a small hill in the centre of the island is an anchor-shaped lighthouse that also serves as the Visitor’s Centre. Another group had just arrived and were watching the introductory video inside, so we were led up to the viewing platform on top of the building from where we could admire the achievements of those who built what is indeed an impressive piece of engineering. 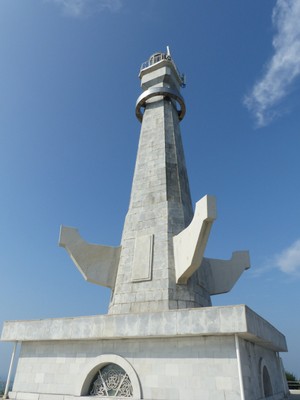 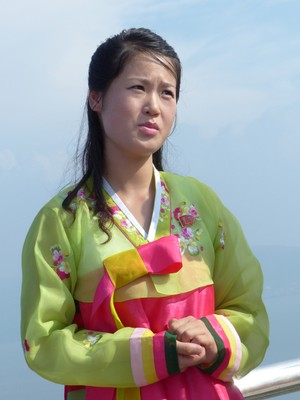 The lighthouse on Pi Island, and our guide

Our guide explained that the barrage was built to reduce the salinity of the Taedong in Pyongyang so the water could be used domestically and in industry. Other benefits of the project included easier passage for ships, improved irrigation of arable land between here and the capital, increasing the supply of water to industry, protection against flooding and providing a road and rail link between South Pyongan & South Hwanghae Provinces. 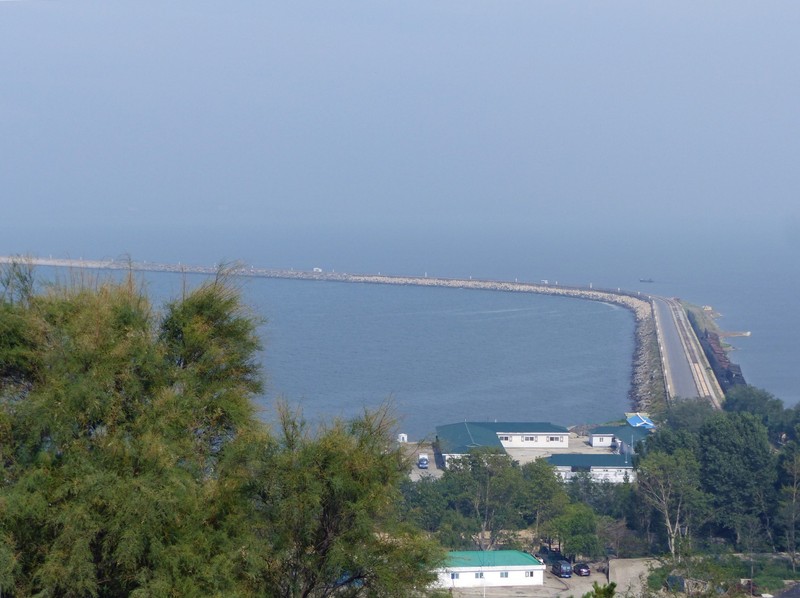 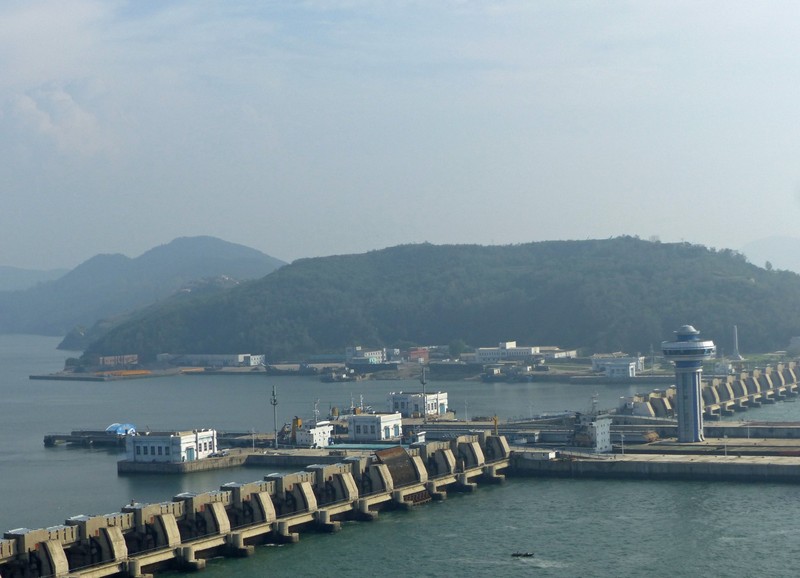 The barrage is eight kilometres in length, with three locks and 36 sluices. The guide pointed out some of these features and explained that each lock was a different size to accommodate different sizes of ship.

By this time the other group had left the visitor centre to join us on the roof, so it was our turn to go down and watch the video about its construction which was surprisingly interesting, with an engaging combination of stirring music, patriotic messages and pride, and footage of the valiant construction teams working in all weathers to complete their work as fast as possible in order to carry out President Kim Il Sung’s great plan. 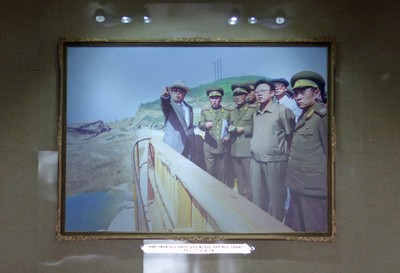 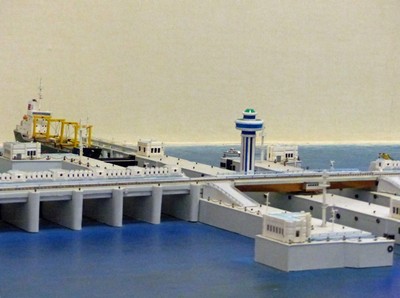 Model of the West Sea Barrage in the Visitor Centre


I had asked our Korean guide if we could stop briefly on leaving the dam to photograph the West Sea Barrage Construction Monuments which honour those who built the barrage, but because these are so close to a military post the best she could do was ask our driver to slow down as we passed so that we could get photos out of the windows. 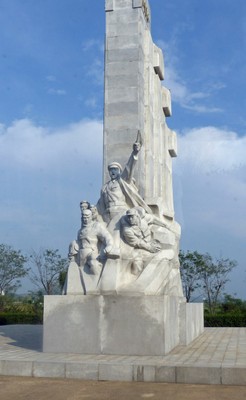 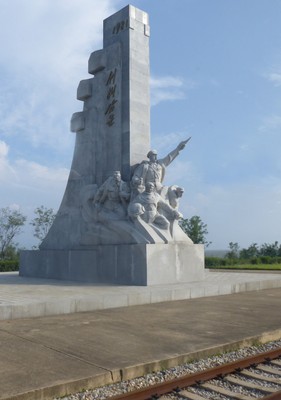 Monument at the West Sea Barrage 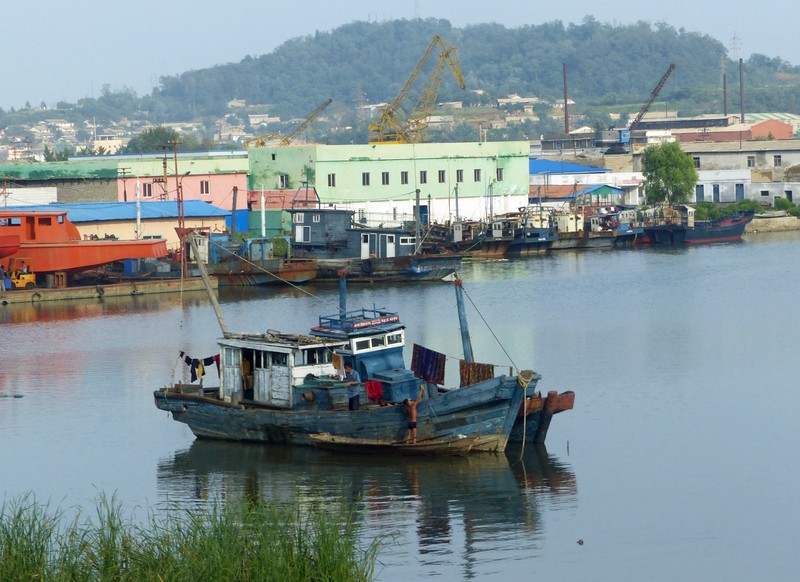 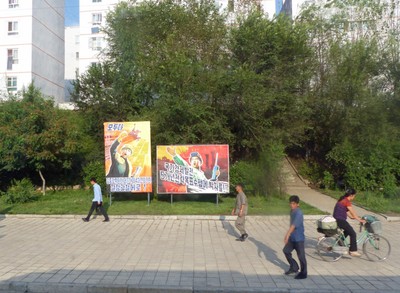 As we drove back into Pyongyang I managed to grab some photos from the bus of the Mangyongdae Schoolchildren’s Palace. This was opened in 1989 and is the newer and larger of two such facilities in Pyongyang – the other is the Pyongyang Children's Palace, founded in 1963. To my regret we didn’t get the opportunity to visit a children’s palace while in North Korea – one of the very few things on my ‘wish-list’ that never made it on to our packed itinerary, here or in any other city. But we did hear quite a lot about them from our guide, who stressed on several occasions the importance of children and young people. They are, she said, regarded as little kings and queens (President Kim Il Sung once remarked that ‘children are the kings of the country’), and as such should be afforded the best facilities – hence the name of these institutions, palaces. 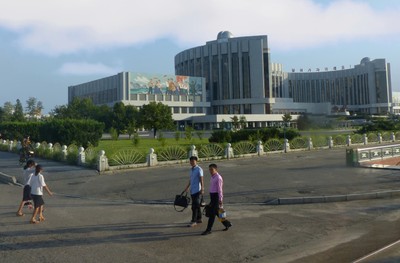 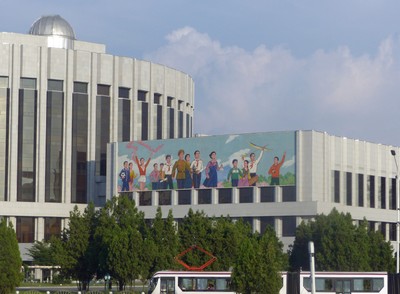 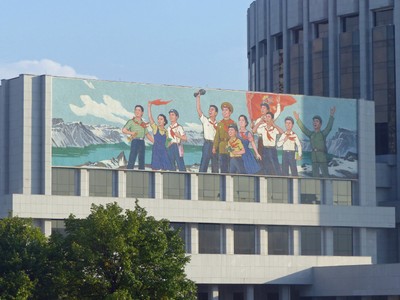 A children’s palace is where children come for all their extra-curricular activities – music, sport, language study, computing etc. The Mangyongdae Schoolchildren’s Palace is the best in the country and as such welcomes the most talented and/or privileged of youngsters. According to the government-produced guidebook to the tourist attractions of the DPRK that I bought at Pyongyang Airport it has more than 140 rooms, a swimming pool, gymnasium, library, and a 1,400 seat theatre, and, can accommodate more than 5,000 children every day. The design of the building, with a central building and two curved wings, is said to resemble the outstretched arms of a mother welcoming the children – or possibly Kim Il Sung, who introduced the idea of these palaces, reaching out to embrace the children he loved. The huge murals on either side show a (very) young Kim Il Sung surrounded by Young Pioneers – on the left in front of the lake on Mount Paektu, the sacred mountain, and on the right carrying a variety of objects associated with the activities here – a football, a microscope and a model plane among others.

As I said, we didn’t get the chance to see inside nor to attend one of the performances staged here for visiting groups, showing off the accomplishments of the children. But our visit to a kindergarten, later in the tour, would definitely compensate for the latter!

Evening out in Pyongyang

By now it was late afternoon and I for one would have welcomed a break at the hotel to freshen up before dinner. But it was not to be. If a Korean guide can squeeze in one more sight or entertainment for your pleasure, (s)he will, so we were off to a shooting range in a modern building in a modern complex of sports facilities. I believe it was the Meari Shooting Gallery, described in the ‘DPR Korea Tour’ guidebook I later bought at Pyongyang Airport as ‘a modern sports shooting centre furnished with an outdoor shooting range, an indoor shooting range, an electronic recreation hall [and] outdoor service facilities’. 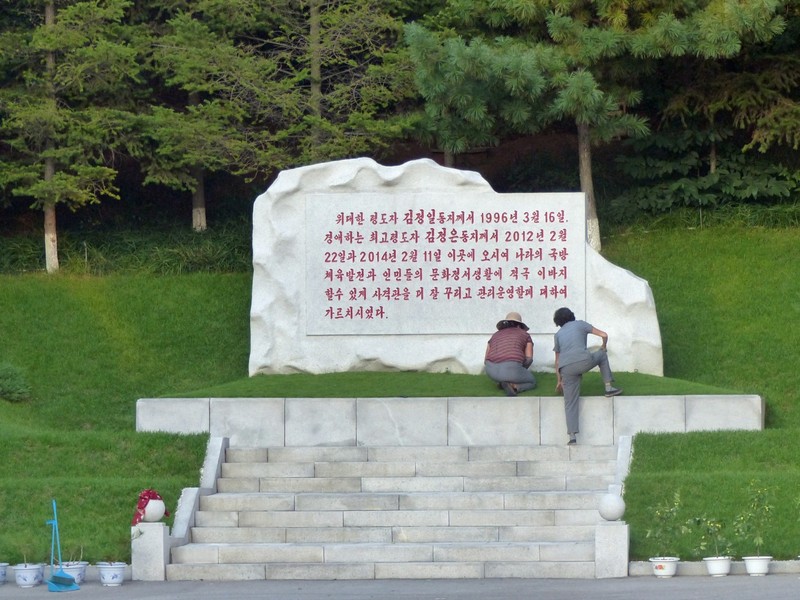 In the grounds of the Meari Shooting Gallery


Only a few of us were keen to have a go; the rest looked on and took a few photos. Prizes of soft toys were awarded to our guide herself and to our travelling companion Michael. Meanwhile Carl posed with a Korean Kalashnikov. Guns don’t really appeal to me, but I tried to take an interest despite my tiredness. 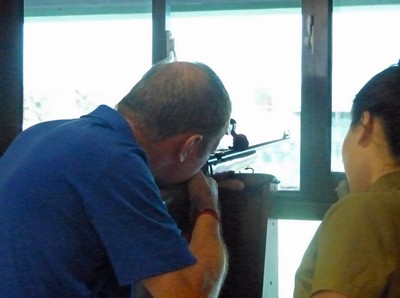 Travelling companion Chris at the Meari Shooting Gallery
~ as opposed to 'my' Chris! 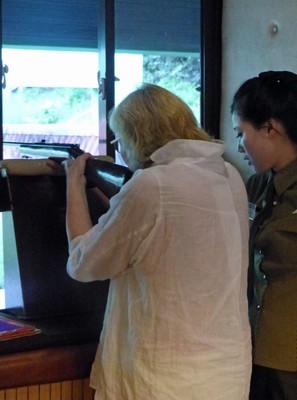 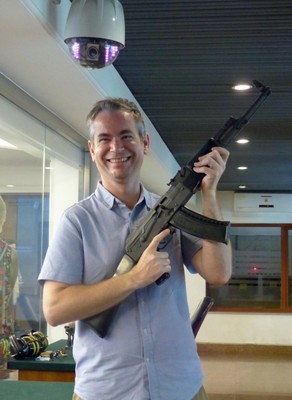 Jan has a go, and Carl with Korean Kalashnikov 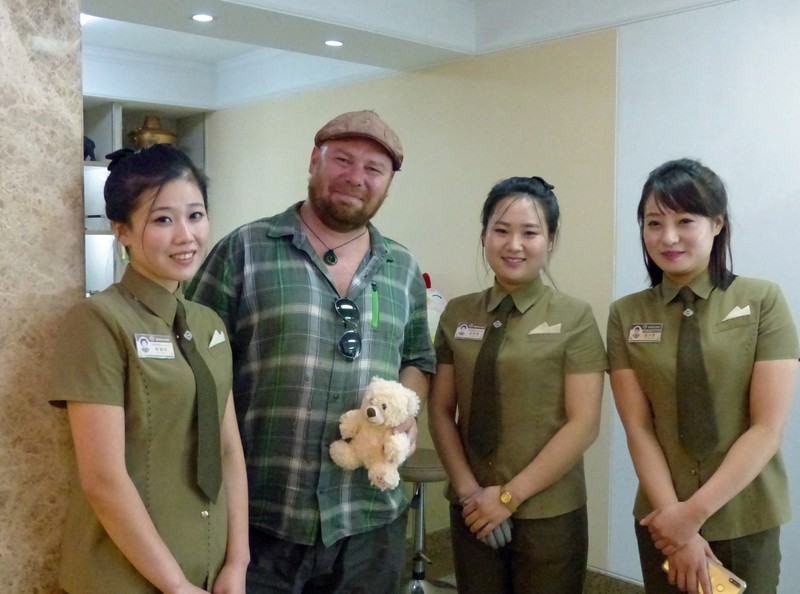 Michael with prize and some of the staff


We were shown various other sections where different disciplines such as archery and other types of guns were in use, but by now everyone was wilting and no one keen to have a go (I think to our guide’s disappointment). To my relief (and I suspect everyone else’s) we were also allowed to pass on the opportunity to shoot at live birds such as chickens and pheasants – even though, we were assured, had we shot one of these we would have been given it to take away for dinner!

So we returned to the bus and drove to the Kwangbok supermarket where we had shopped with Korean currency a few days ago. We were here to have dinner in a basement restaurant but first there was time for more shopping for those who were interested and for a beer in the cafeteria on the top floor for the rest of us. Carl said this would be the cheapest beer we would ever buy, and he could well be right, as the price of 2,000 won worked out at 25 cents, or less than 25 pence! The bar snacks that Michael bought were even cheaper, at 1,000 won, but unsurprisingly perhaps none of us found the little dried silkworm chrysalises very appetising. They were unpleasantly dry and brittle, and tasted to me of furniture polish – or rather, as I imagine furniture polish would taste were I stupid enough to eat it! But it was fun to experiment. 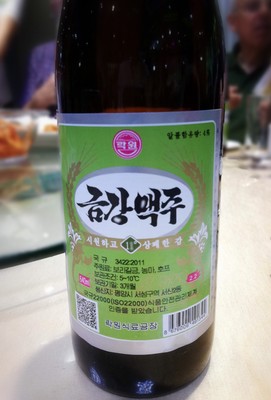 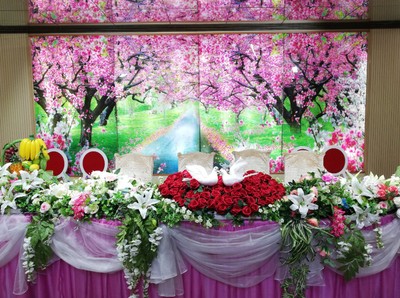 
The restaurant was very gaudy, with a top table set up for a wedding, and we had a pleasant meal and downed a few more (not quite so cheap) beers before, finally, going back to the hotel. Chris and I passed on another evening in the bar and headed to our room to shower and relax for a few hours before bed.