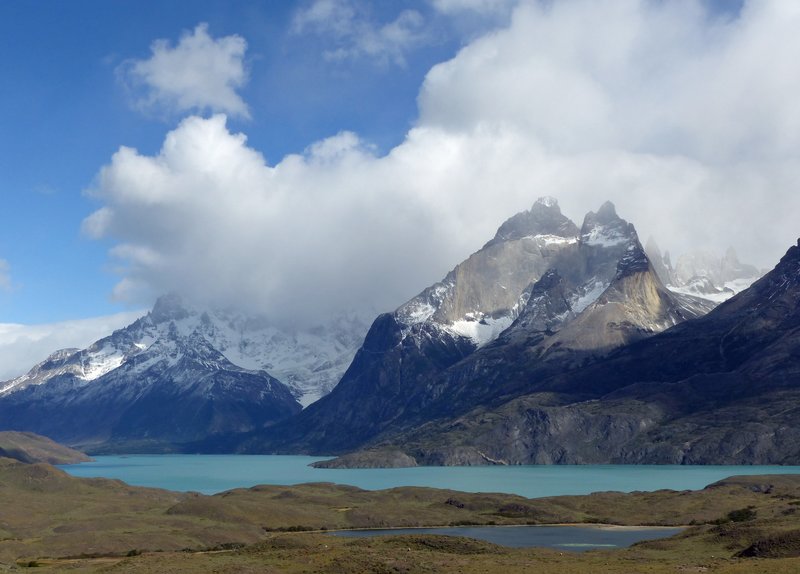 On our one full day in the Torres del Paine National Park we did the tour offered by our hotel, the Hotel Las Torres, known as the “Full Paine”. This is billed as “giving guests the fullest introduction to Torres del Paine National Park in the shortest amount of time”, which I think is a fair description. You travel by road through the park, stopping at various places for (mostly) short walks. These include the Puente Negro (Black Bridge), Nordenskjöld Lookout, Sarmiento Lookout, Lake Pehoé and Salto Grande waterfall.

This disused wood and black iron bridge was built by a British engineer many decades ago, and was in use until 2012. It is very narrow – deliberately so – in order that the ranchers could count their cattle as they crossed the bridge no more than two abreast. On our hotel’s website you can see an old photo of a car crossing the bridge (Black Bridge), giving a sense of just how tight it was for those early visitors to the park. Today there is a newer bridge right alongside it which, while it may be stronger and wider, is certainly uglier.

From this spot we had great views of the Torres del Paine and the rest of the Paine Massif. We were also lucky enough to see a condor wheeling overhead, and after some considerable effort chasing it with my zoom I even caught it on camera! 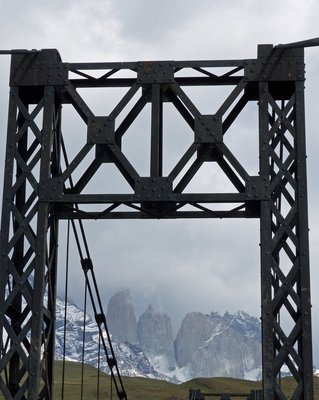 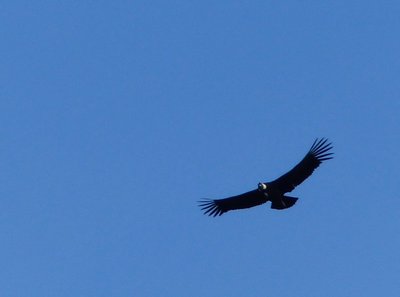 These two lakes lie quite near each other but are quite different in appearance. Nordenskjöld is a milky turquoise in colour while Sarmiento is deep blue. Our guide explained that this is because the former is fed by the Rio Paine, which brings melt-water down from the glaciers into the lake’s easternmost point, and then exits via the Salto Grande into Lake Pehoé. Sarmiento on the other hand is a “stand-alone” lake, unconnected to the river system, and thus has no icy melt-water.

There are various viewpoints along the road overlooking the lakes, but before we even reached these our bus stopped and our guide led us in the short climb up a nearby ridge from which we could see both at the same time. From this spot Nordenskjöld has the Paine Massif as a stunning backdrop, with the Cuerno peaks (the “Horns”) in the foreground and the Torres off to the right and more distant. To the left are, I believe, Punta Bariloche and the Cumbre peaks, with the Glacier del Francés just visible in some of my shots.

Lago Sarmiento on the left and Lago Nordenskjöld on the right 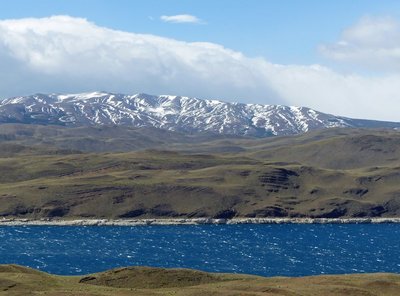 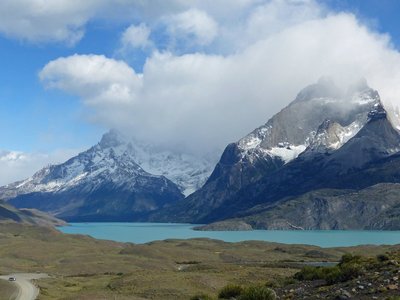 The photos here were further enhanced by the bright red clumps of the Guanaco Bush – so-called because it is a favourite food of these animals. We didn’t see any of them here but were to spot some later in the day, and many more on the following morning. 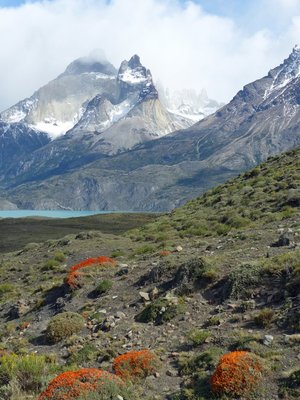 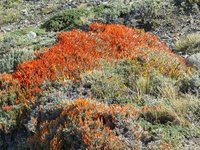 Lake Nordenskjöld spills into Lake Pehoé via the Salto Grande. The falls are reached by a short walk of about one kilometre on a stony but level path. When we were here the wind was incredibly strong, make what must usually be quite an easy walk into something rather more challenging. But the scenery along the way is stunning and would be well worth the effort even without the reward of a waterfall at the end of the path! I took one of my favourite photos of the park here. 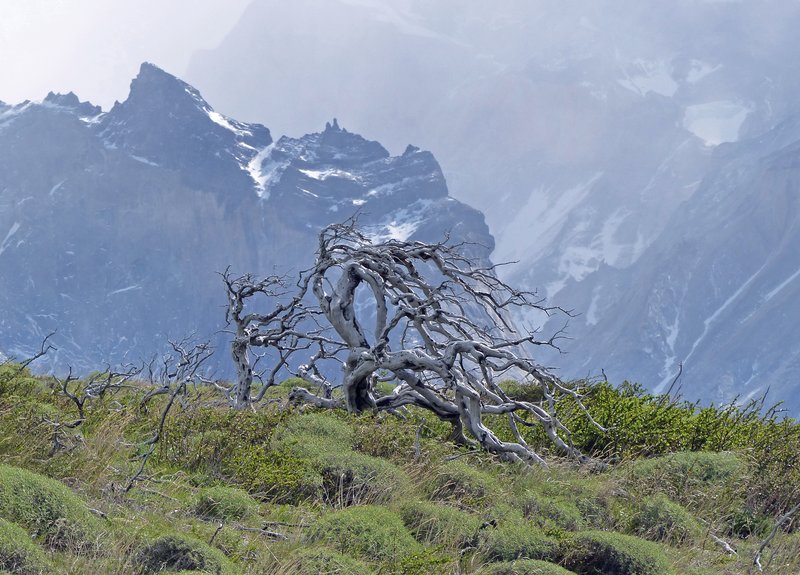 From the path to the falls

When we reached the falls the wind was if anything even stronger, as the overlook is quite exposed. The falls themselves are not high but the water spills over with great force and the turquoise colour adds greatly to the scene. Even some distance above the water I could feel the spray on my face and hear the roar. 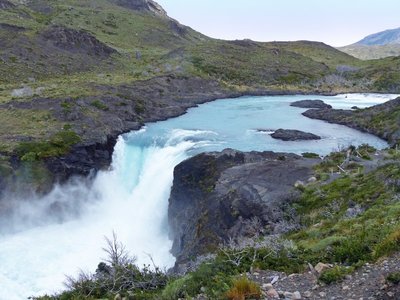 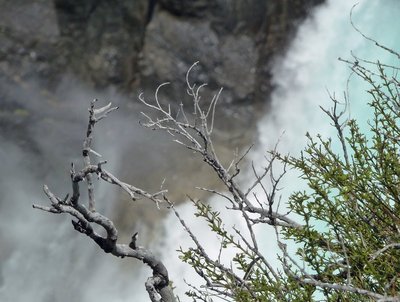 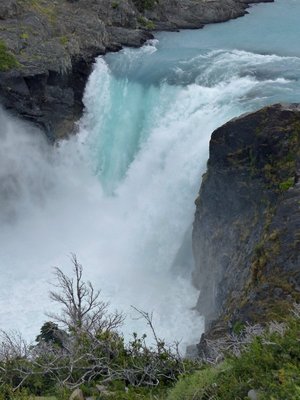 A little way upstream are some rapids where the colour is if anything more intense. The path follows the water’s edge a little way towards these and some of our group headed along that way, but I preferred to stay where I was, enjoying and photographing the falls and for a short while having a little corner of this special place to myself. 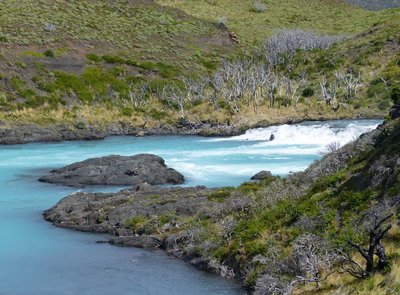 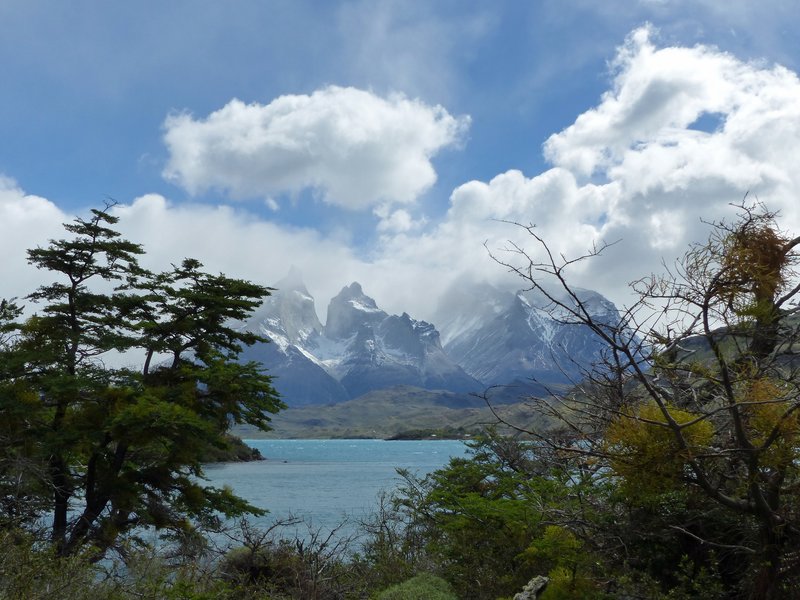 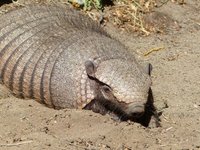 Lunch is included in the price of this tour and we enjoyed a fabulous picnic at a spot near Lake Pehoé.

We had pre-ordered our box lunch the night before, with a choice of sandwiches including beef, chicken, tuna or cheese, but what we got was so much more than that. While we took photos down by the lakeside our guide and driver laid out a spread that included a variety of cold meats and cheeses, fresh fruit, cake - and to drink, Chilean wine (red or white), lager, soft drinks and freshly brewed coffee. We drank a toast to our guide, whose birthday it was, and enjoyed getting to know others in the group. Our lunch was interrupted at one point by the visit of an inquisitive armadillo who just had to be photographed!

This was also an excellent bird-spotting area. My favourite was the pretty Patagonian Sierra Finch. The only other one I have been able to identify was a Rufous-tailed Plantcutter – maybe my readers can do better! 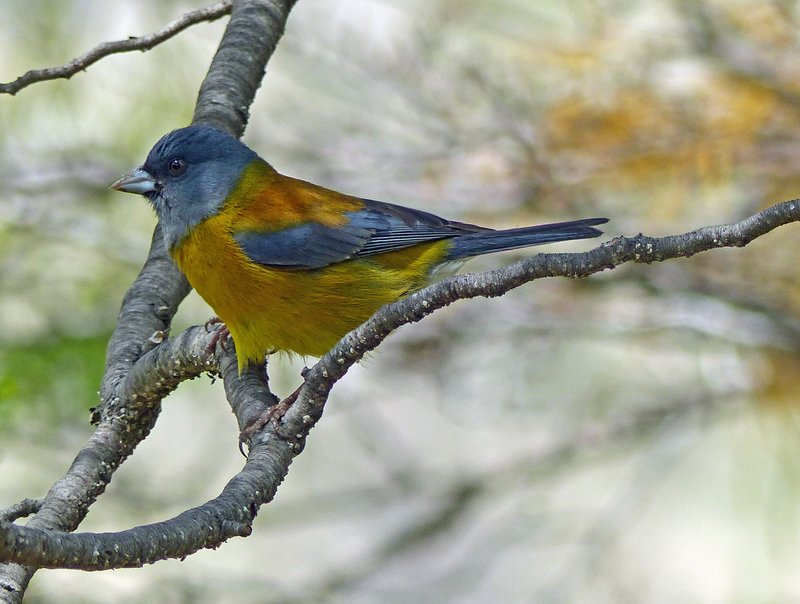 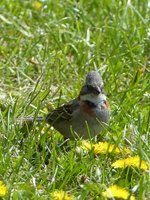 Rufous-tailed Plantcutter and unknown others

After lunch we drove on to Lago Grey where as an optional extra to the main tour you can take a cruise to get close to Glacier Grey. We had naturally chosen to do this, as had everyone else in the group. I had been warned that it was about 1.5 kilometres to walk from the bus to the point where you board the catamaran – a distance I can manage with ease. However, what they don’t tell you (or at least, no one told us) was that for most of this walk you will be battling ferocious winds while trying to keep your balance on the black lava beach! The scenery here is fierce but fantastic; however, I was hard pressed to see much of it, let alone take photos, as even staying upright was at times a struggle! 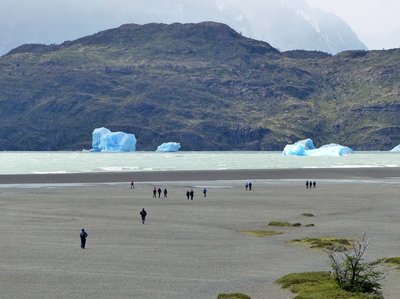 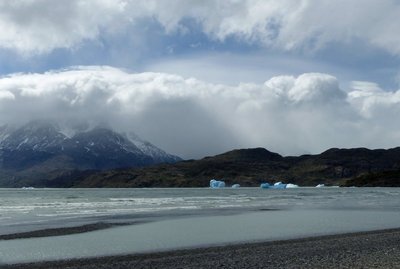 When we reached the boat landing point we had about a ten minute wait before boarding. On board we found a comfortable lounge area with plenty of room for us all to spread out. We were asked not to go on the outside upper deck until the catamaran had sailed and for a short while afterwards, as the winds were so strong at that point. We were also told we must wear life-jackets while venturing up there.

We spent most of the journey to the glacier inside, with occasional forays outside to take photos, while the crew played a bizarre selection of Elvis Presley hits (most of them repeated several times during the course of the hour-long trip). Once we reached the glacier though, the boat slowed right down and everyone of course made their way upstairs.

Glacier Grey is certainly an impressive sight and really worth the journey to get here. It reaches the lake on two fronts, as it separates around a small island that stands in its way (known as a “nunatak”), but at the point before it forks it is six kilometres wide. The ice stands 30 metres high and even in quite a large boat like the Lady Grey you are dwarfed by it. It was only when we approached quite close to the ice that I realised the scale – from a distance you think you must be nearer and the glacier not so massive as it really is.

Arriving at the glacier

And as well as being surprisingly high, it is also surprisingly beautiful, shot through with deep blue cracks and set against the blackness of the surrounding volcanic rock. 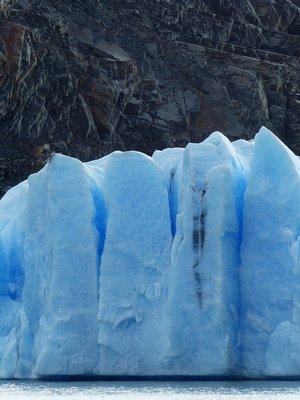 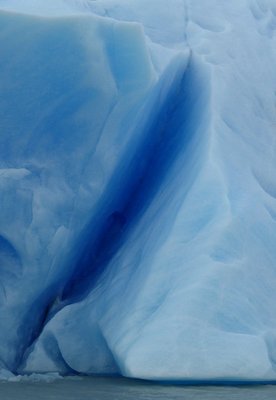 Our boat cruised very slowly along the front of the smaller eastern section before turning to go back past so that anyone who’d stayed downstairs and was on the “wrong” side of the boat could also get a good view. We then sailed round the nunatak to the western section which is if anything more striking and more beautiful, and repeated the slow cruising until we had all had very good opportunities to see and photograph. And boy did I photograph! Every new angle presented a different perspective; every new crack in the ice seemed a deeper shade of blue. And when the possibilities offered by the glacier itself began to run out, there were also the turquoise blue icebergs drifting past, off-shoots of the main star of the show. 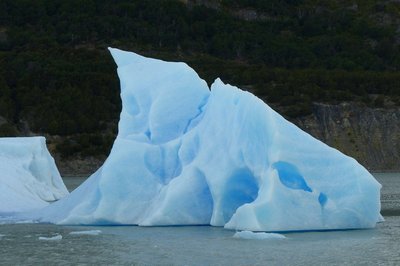 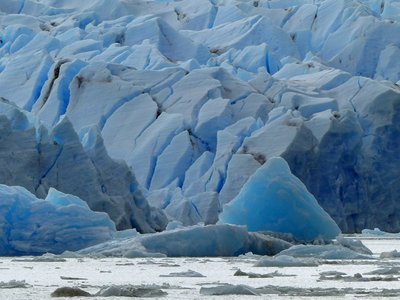 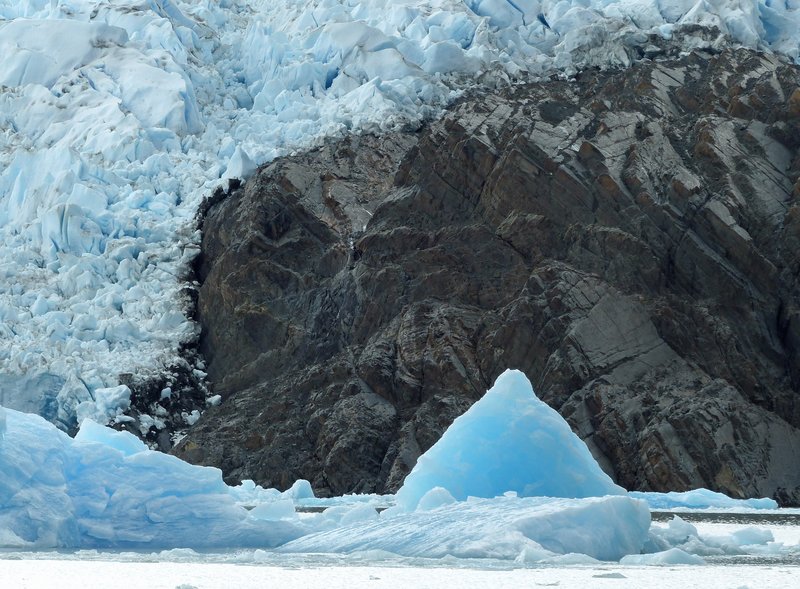 Altogether we spent about an hour at the glacier, so everyone had plenty of photo opportunities and we saw its full extent. When we finally turned back towards the southern end of the lake, drinks were served – pisco sours (or fruit juice for the non-drinkers) chilled with ice chopped from a large block of iceberg brought on board for this purpose.

After another hour of sailing (and Elvis!) we returned to our starting point. The wind was a little behind us for the walk back to the bus, making this a little easier, but I was still glad to reach it – but far more glad indeed to have made the trip which was to prove one of the highlights of our time in Chile.

Forgive me then if I finish this entry by indulging myself in sharing even more of my photos! 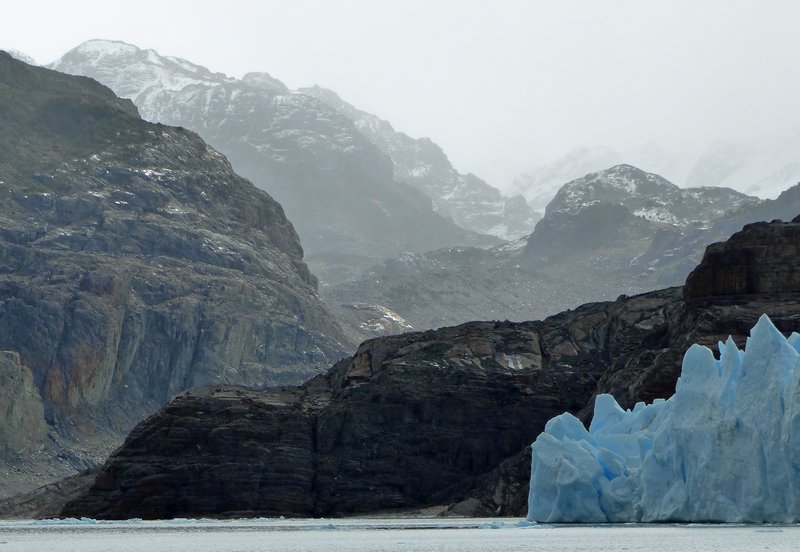 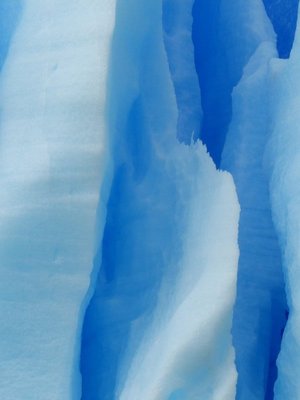 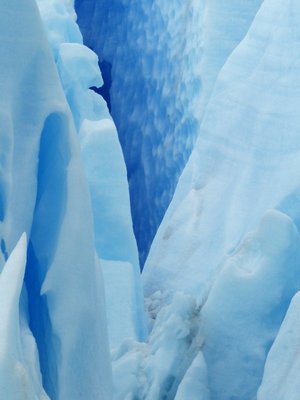 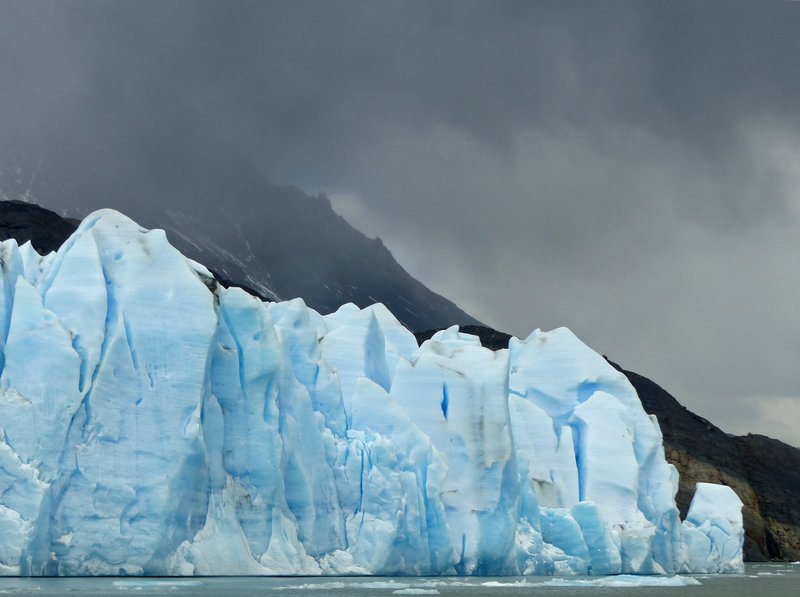