Around and about in Munnar 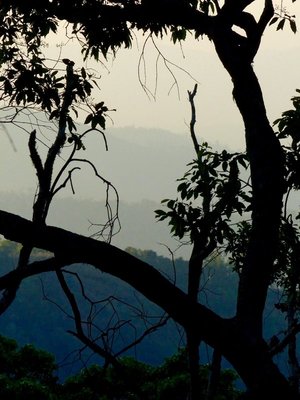 The Bracknell Forest hotel has as its strapline "The sounds of nature" and this is what we had experienced on the afternoon of our arrival. I had looked forward to waking to the sound of birdsong as described in many reviews I had read. But it was not to be. Soon after 6.00 I woke instead to the sound of the generator at the property next door, albeit accompanied by the pretty view of the sunrise through the trees.

Breakfast is served from 8.00 and we were there promptly as we had arranged to meet Unni at 8.30 for the day's outing. Fresh watermelon juice, a fruit platter, eggs cooked to order (I had a very good masala omelette) and OK coffee, and we were set for the day.

Unni drove us back down the winding road we had travelled yesterday afternoon and on the outskirts of Munnar we met up with our guide Vinid for a walking tour in a tea plantation. You need to be with a guide who has a permit to visit these, by the way, so don't be tempted to go exploring on your own.

As we climbed up through the plantation Vinid stopped to explain to us the different types of tea, white, green and black - which leaves are used for each and how the processing varies. For white tea only the top bud is used, for green tea this bud plus the next two leaves, and for black tea the top four leaves. The bushes can be harvested every 10-11 days, more often in the monsoon season, and a bush lasts for 100 years before its leaves are no longer viable, so that's a lot of leaves and a lot of plucking! 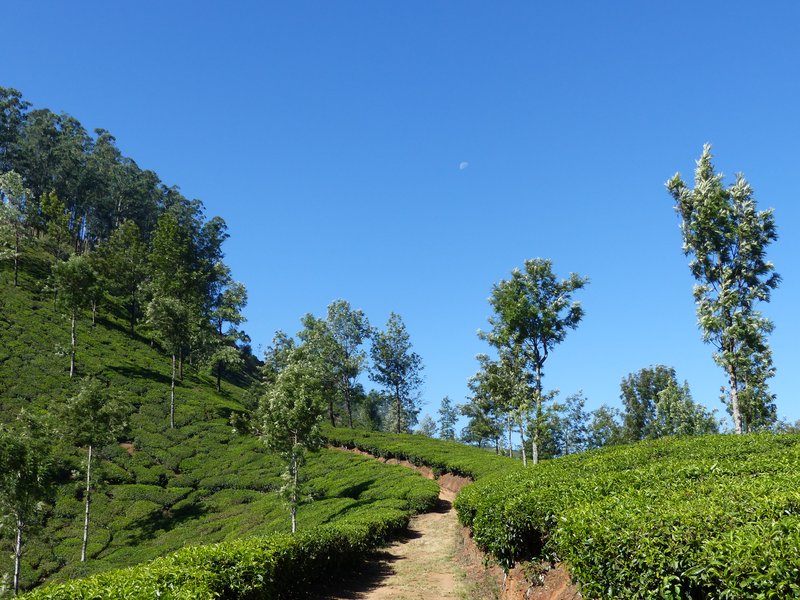 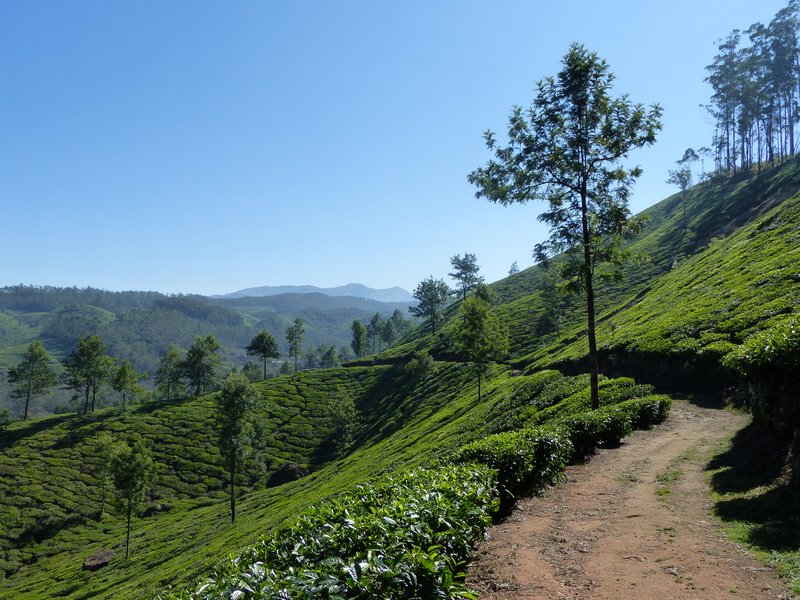 Paths through the plantations 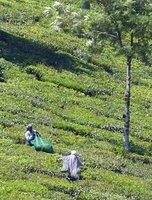 He also explained a lot about working practices here and the history of tea growing in Munnar, which we were later to hear more about on a visit to the tea museum. The region was "discovered", as far as the British are concerned, by no less than the Duke of Wellington, back when he was plain Colonel Wellesley in 1790. In those days the mountainsides were forested but the survey teams who followed soon after recognised the potential of the land. Various crops were tried here but it was tea that became a resounding success. After independence the British-owned tea plantations transferred to Indian ownership, most notably the Tata group whose influence is strongly felt in Munnar. But for the last ten years the company here has been largely under the ownership of the workers who all have a share in it.

Despite this and the many worker benefits introduced by Tata and still maintained (free education, health care, housing), it is a hard life for the pluckers in particular. They work 8.00 to 5.00, six days a week. They live in very basic housing and are on minimum wages. Vinid painted quite a positive picture, but my further reading on returning from our trip revealed tensions within the workforce: http://www.bbc.co.uk/news/world-asia-india-34513824. 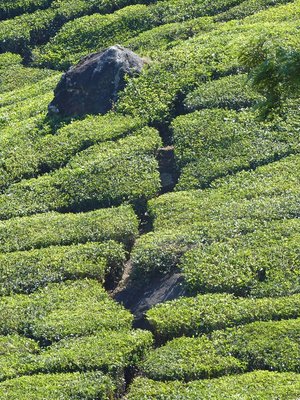 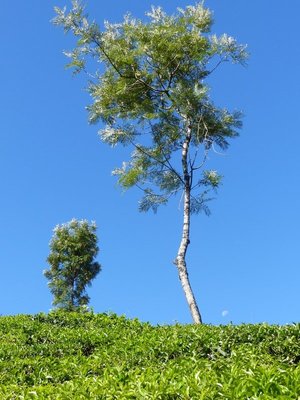 As well as learning a lot as we walked, we also took loads of photos. At this time of day, when the shadows were still quite long, the bushes looked almost sculptural, and the different shades of green formed abstract patterns wherever we looked. The odd splash of colour was provided by the bright red of the Indian Coral (or Flame of the Forest) tree and the bright purple of trailing Morning Glory flowers, and darker accents by the occasional large boulders that dot the fields, while Silver Oaks and Eucalyptus trees provided the light. Vinid also pointed out nearby Anamudi Mountain which has the shape of an elephant and is the highest peak in the Western Ghat range. 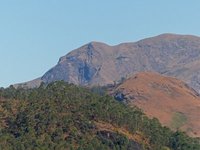 
We were walking for close to two hours, albeit slowly and with lots of stops, and eventually descended again to road level near a small temple devoted to Ganesh. 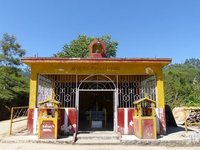 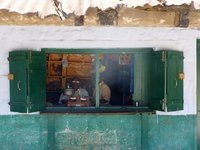 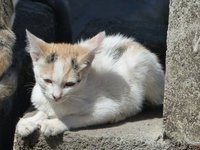 Here we were picked up by Unni to drive to our next stop, the Tea Museum on the other side of town.

Munnar's Tea Museum is housed in a former tea factory. It has a handful of rooms which exhibit old photos from the early days of tea farming here and various objects associated with the business, including old telephones and calculators, a tea grinder, office furniture - a bit of a hotchpotch really. One room shows a documentary of about 30 minutes describing the history of tea plantations in this region, from first "discovery" by Colonel Wellesley through early development and the influx of workers from neighbouring Tamil Nadu, transfer to Indian ownership after Independence, and to the present day. This is well-made and was rather more engaging than I had expected it to be, but, even more so than Vinid, paints a very positive view of life on the tea plantations. 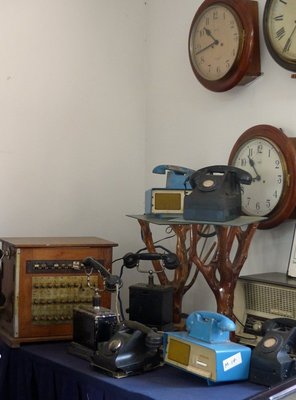 In another building, you can follow the two types of tea processing undertaken here - so-called "orthodox " and the new CTC method. In the former the leaves are rolled whereas in the latter they are cut. This is a faster process but produces lower quality powdered tea which is mainly used for the domestic market or in teabags, while the regularly produced tea is exported. Vinid demonstrated both processes for us from start to finish through the various machines on display. If you are more keen on tea than we are you can also buy some here, and I think I spotted a small snack bar where you can drink some on the spot. 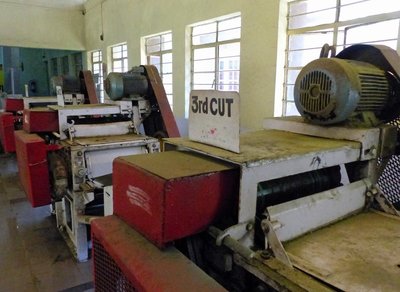 It was at the suggestion of our driver Unni that we visited the Sristi Complex, and an excellent one too. As part of their welfare of the workers initiatives, Tata founded this institute where, as our guide Vinid put it, "differently abled" young people from the community can develop practical skills that will give them employment and enable them to find their place in society - or, as the leaflet we were given puts it, "the Srishti Complex is a unique venture of the Tata Global Beverages Limited for the rehabilitation of the differently abled dependents of the tea plantation workers".

There are several ventures within the complex, of which we were shown two. In the first, Aranya, the young people use natural ingredients, including tea waste, turmeric and eucalyptus leaves, to make dyes and create silk scarves, shawls and other items. A young lady showed us the dyes and the various techniques they use to pattern the textiles. In another unit we visited, Athulya, they use waste ingredients to create hand-made papers which are sold, turned into gift items such as notebooks and boxes, or used for more practical purposes - they make many of the paper bags used in Tata's retail outlets, for instance.

They don’t allow photography in the work areas (I assume to protect the young people working here) but I was allowed to take a photo of the dyes they use. And you can see and read more about the initiative on their website: http://www.srishtinatural.com/ 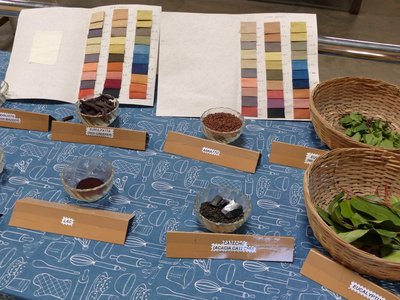 Both units have small shops attached and given the nature of the work it would have been a bit churlish not to indulge in a purchase, so I came away with a silk scarf dyed with tea waste - much prettier in colour than that perhaps sounds!

On the way back to town we stopped to take photos at a colourful temple set among the tea plantations. 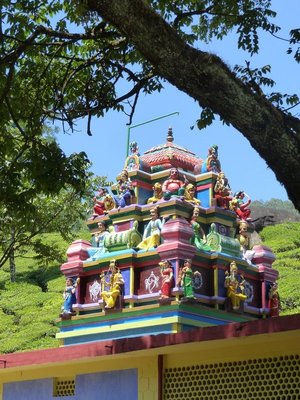 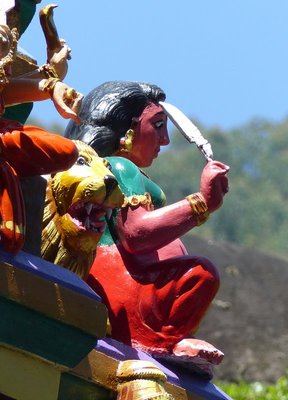 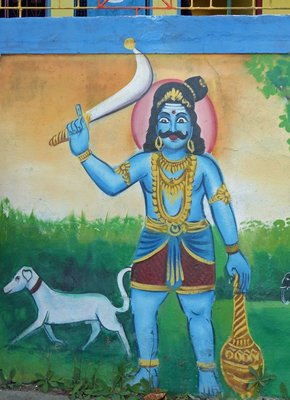 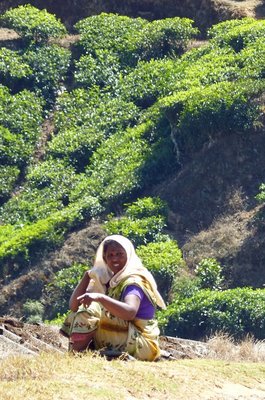 Our final stop of the morning was in Munnar itself, where we took a walk through the markets - firstly the general market where everything from chickens to gold jewellery to flower garlands to saris to lottery tickets, and more besides, was on sale. And then the vegetable market where the goods available were more predictable! We bypassed the fish market however - Vinid hadn't needed to point out that the fish sold was not of the freshest as even at a distance my nose told me that! 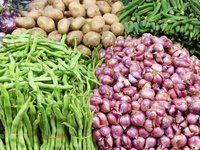 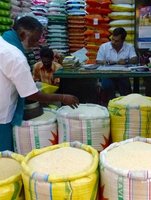 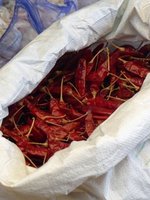 For sale in the market - vegetables, rice, chillis and clothing

It was quite easy to take photos here as Indians generally have no problem with strangers taking their picture and some will actively encourage it, like the lady on the bus below. We were also asked to pose with a local man keen to have something different to share with his friends no doubt. 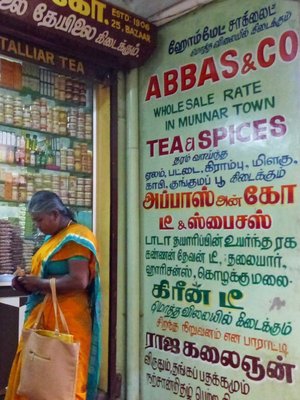 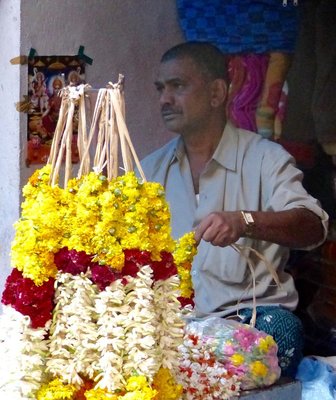 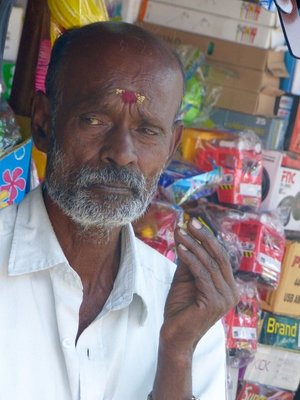 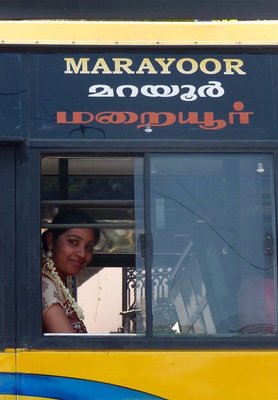 After this we said goodbye to Vinid, who had proved an excellent guide, and Unni drove us back to the hotel, with a stop to photograph the jacaranda trees that had caught my eye the previous day. 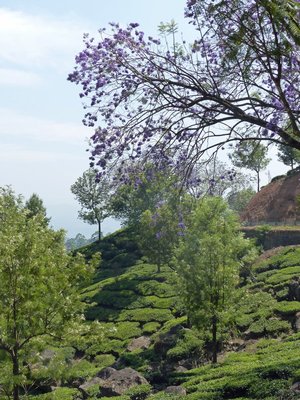 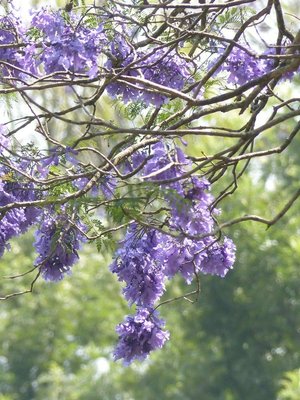 What remained of the afternoon was devoted to relaxing on our balcony with its views of the surrounding trees, writing these notes and sorting through the many photos we had taken. In the evening we ate again in the hotel's restaurant (not that there is any option to do otherwise in this remote spot so far from town) and enjoyed a variety of vegetable curries with the excellent mushroom pilau rice and the beer purchased for us on the previous day.