Of chicha and wine

A day trip out of Santiago 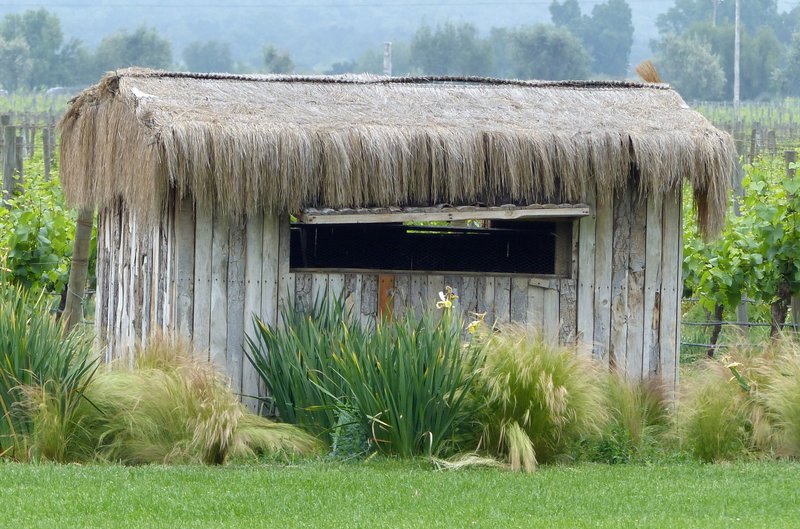 At the Emiliana vineyards

On our third day in Santiago we took an all day trip with Protours. While some may sniff at organised tours, and we too hate the cattle-truck approach, we’ve found private tours on occasion to be a good way of packing more into our valuable time than might otherwise be possible. Certainly we could not have done everything we did on this day by ourselves, short maybe of hiring a car.

Our guide for the day was Sergio, and our driver was Sebastian. Both did a great job, but it was Sergio who especially impressed us, as after only a short chat in the car as we drove out of Santiago, he was able to propose a programme for our few hours in Valparaíso, and a place for lunch there, that suited us perfectly. He also tracked down a shop here selling the elusive international adapter we'd been unsuccessful in purchasing the previous day in Santiago. 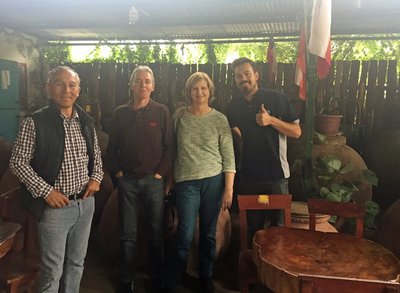 With a chicha producer and Sergio in Curacaví

Our first stop on leaving the city though was at a family-run chicha producer in Curacaví. In Inca times Curacaví was a supply post on the route from the Andes to the sea. Today it is a largely rural community just off the main road between Santiago and Valparaiso, and as such is experiencing growing popularity for commuters wishing to get away from the city’s pollution. Despite this though, it struck us as a peaceful place. Local people here, including the friendly guy who runs the chicheria we visited, are working hard to develop it as tourist destination with tours focused on traditional food and drink. In addition to the chicherias (there are several here) there is a craft brewer, Kross, fish-farming and bakeries. 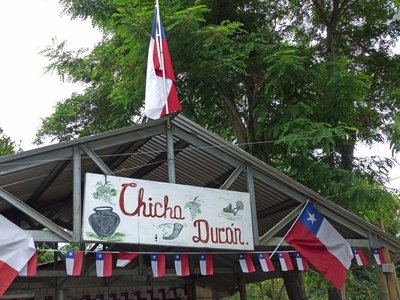 But Curacaví is most famous in Chile for the production of chicha and it was this that brought us here. Chicha is made throughout Central and South America and refers to any fermented home-made drink (what we might call moonshine). It is most commonly made with corn or maize, but each country has its variations on this, based on what crops are available. In Chile two main types are produced, using apples in the south and grapes in this central region. The cultivation of grapes was introduced by the Spanish in the 16th century and the local Mapuche people adopted them as the main ingredient for their traditional drink in this region.

Our host showed us the large copper bowls where the grapes are heated (not boiled). The resulting liquid is then transferred to huge earthenware vessels, which we were told are very old and left to ferment. The period of fermentation seems to be quite flexible, depending on the producer’s judgement and (I suspect) how badly they want to start drinking it! 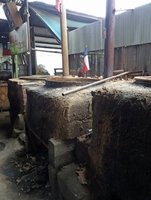 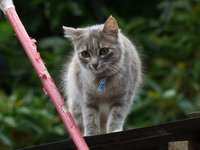 Unlike some Latin American countries, you are unlikely to see chicha bottled and available for sale in the shops. Instead it is bought directly from producers such as these, either to enjoy on the spot or to take away to drink at home. It is especially popular on and around the Fiestas Patrias, the two days in September (18th and 19th) when Chile celebrates its independence. Traditionally at the official celebrations in Santiago the President will be offered chicha in a bull’s horn drinking vessel by a representative of the huasos, the men of the countryside – but he is expected to take only a small sip, not to get drunk!

Talking of drinking … of course, we had to sample the chicha. I found it a little sweet for my taste but much less so than I had been expecting, and also unsurprisingly quite strong, especially for mid-morning – neither of which stopped me from downing my glass!

From Curacaví we continued to the Casablanca Valley and the fairly small-scale organic vineyard of Emiliana. The Casablanca Valley between Santiago and Valparaiso is one of Chile’s newer wine region, with plenty of modern wineries using the latest technology. The climate is temperate, reflected in the soft greens of the landscape, and the easy drive from the capital means this is far becoming a popular area for vineyard tours. Many of the wineries offer tours and tastings, and you can visit them on an individual basis or as part of a day tour taking in several of them.

I have visited wineries in the past and I expected the tour of Emiliana to be similar, focusing on how the wine is produced. But no, this tour was rather different, and very interesting and enjoyable. Our guide, a long-term employee of the company, was evidently proud of their ethical organic approach and keen to share. He took us on a walk around the grounds, where we saw that approach in action. 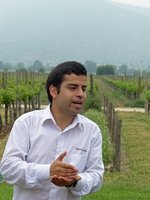 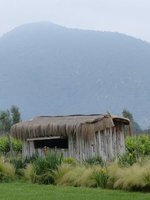 We were a group of about ten visitors, most of them tourists from other South American countries, and the guide gave all the explanations in both Spanish and English. This made it a little slower perhaps, but gave us all plenty of time to take photos. We started with a visit to the nearest vineyards, with an explanation of the different varieties grown here and the organic and biodynamic principles they follow to ensure that they thrive. While I knew something about organic farming, I wasn’t really aware of the biodynamic approach, and reading about since in Wikipedia (Biodynamic_agriculture) I have to say it sounds a bit way-out, but as our guide described the Emiliana approach it sounded less extreme (no cow horns were mentioned!) so I have a feeling they only follow certain aspects of biodynamics. On the winery’s website they say:

"Biodynamic is a comprehensive form of organic farming that heals the planet through regenerative agriculture.
For us it is essential to respect the three basic principles of biodynamic.
1. The land is a living being that has a natural balance. We firmly believe that human intervention should not affect the natural biological balance of the land, but preserve it.
2. The biodynamic calendar (based on the cycle and rhythm of the sun, the moon, the planets and their influences) is vital for our work; it’s our guide to organize different agricultural activities to obtain the best quality wines.
3. The connection among the mineral, vegetable and animal kingdoms is also essential: we promote the use of biodynamic homeopathic preparations."

OK, maybe a bit way-out! Incidentally though, the website itself is very nicely designed and worth a look: Emiliana

So we saw how they have planted different flowers and plants between the rows of vines, which are chosen to attract insects away from the vines and also to contribute certain nutrients to the soil to balance it out. We also saw how chickens and other fowl are allowed to wander between the vines, as they eat some of the insects who might attack them. They have small mobile chicken coops in which they move the fowl to different areas. 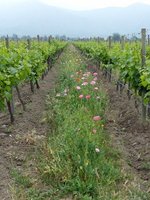 Near the vineyards we visited the enclosure where alpacas are kept. These are taken out each day to graze in a different part of the estate, helping to keep the grass between the vines and elsewhere short and also providing fertiliser. In addition, they are of course a cute attraction for visitors! They also keep cows for a similar reason. 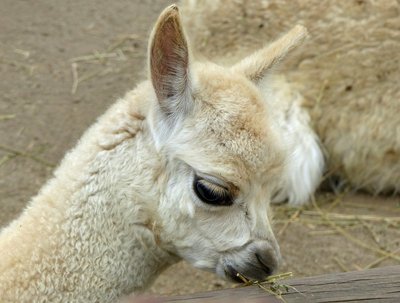 Elsewhere within the grounds native plants have been planted and/or allowed to grow, creating “biological corridors” which help to increase biodiversity and encourage beneficial insects, birds, etc. These native trees and flowers are naturally resistant to weather and other conditions here.

We visited the vegetable garden where each employee is allocated a patch where they can grow their own crops, either to take home for the family kitchen or to sell. Employees also have beehives and again they can use the honey themselves or sell it (the honey sold in the winery shop is on their behalf). The estate also has olive trees; these line the main road and serve as dust-catchers but are also harvested by the workers who benefit from selling the oil that is made through the shop. We really liked the way the owner has thought about employee welfare and happiness, and from what our guide told us (and importantly how he told us) it seems genuine and effective. 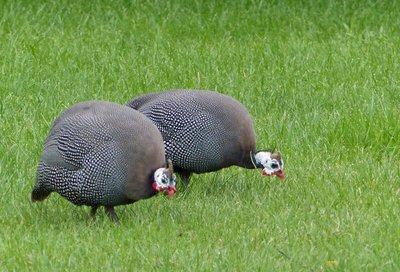 Our tour concluded with a wine tasting in the ultra-modern visitor centre building. This has areas set aside for this purpose on the upper floor, both inside and out – it was a nice warm day so we were on the outdoor terrace. Our tour included a tasting of four wines (you pay less if you only want the tasting, but I do recommend the tour). You can also pay extra to taste their premium wines but they are a lot more expensive and we decided to stick with the four that were included. These were a rosé, a white and two red. 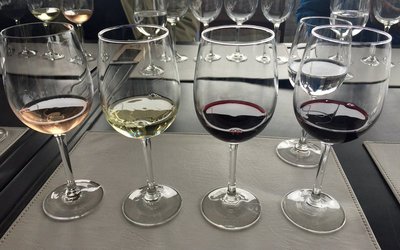 The wines
The rosé was their Adobe Syrah I believe (I forgot to note it at the time) and a very pleasant for outdoor summer drinking as an aperitif, I would say, though Chris was less keen than I was (he doesn’t drink much rosé). The white was from their Novas Gran Reserva range, a Sauvignon Blanc, and was very good. The first red was also from the Novas range and was a Garnache/Syrah blend – very nice indeed, but eclipsed for us by the second of the reds which was Coyam, their signature wine – a blend of mainly Syrah, Carmenere and Merlot grapes, with also Cabernet Sauvignon and a little Mourvedre and Malbec. This was excellent, and very much to our taste. Had we been in a position to buy, this is the one we would have purchased. But bottles of wine are not really a practical purchase when on a touring holiday with multiple flights, so we were pleased to hear that Emiliana have a number of UK stockists and we will certainly be seeking their wines out in the future.

From the Casablanca Valley we continued to Valparaiso, which will be the subject of my next entry.