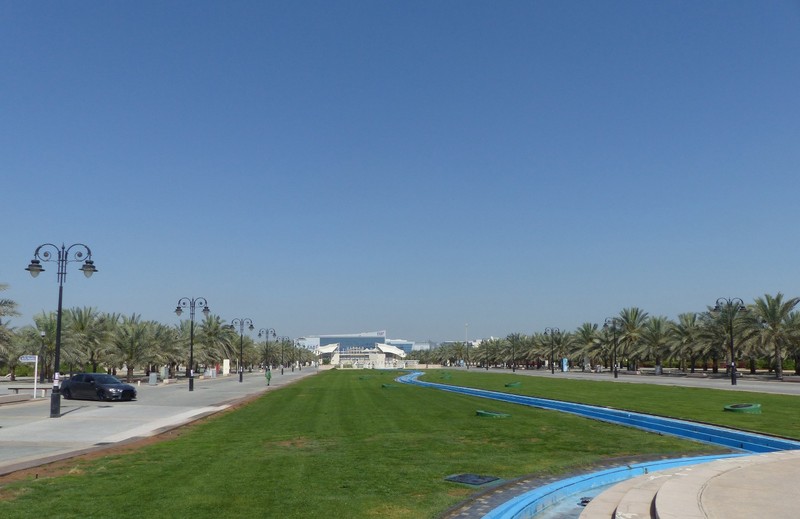 Khalifa Park - view towards the library from the gate

As a change from meetings, today started for me and one of my colleagues with a visit to two of Abu Dhabi’s six (currently) libraries. We started in Khalifa Park, at the eastern end of the main island, quite near the Sheikh Zayed Grand Mosque. We met the manager and had a tour, and talked to two of the library’s users. The park itself, which was established in 2007, seemed quite attractive, with flower beds, a miniature train and a maritime museum. The library however looks rather old-fashioned and is under-used. Well, that’s exactly the sort of challenge we are here to help with! 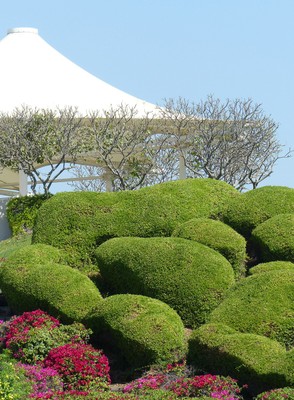 From here we were driven to the library at Al Bahia. On the way I managed to get a couple of photos, through the car window, of the Sheikh Zayed Grand Mosque. This is the largest mosque in the UAE and as well as being a focus for worship in the city (especially Friday prayers and during Eid) it is also a major tourist attraction. Unfortunately I was never able to get closer than this, but it’s top of my list if I manage to return to Abu Dhabi. It was built between 1996 and 2007, and has 82 domes of various sizes, four minarets (each around 106 metres high) and is clad in white marble. It is surrounded by rectangular pools tiled in different shades of blue which act as mirrors to reflect its arcades and columns. 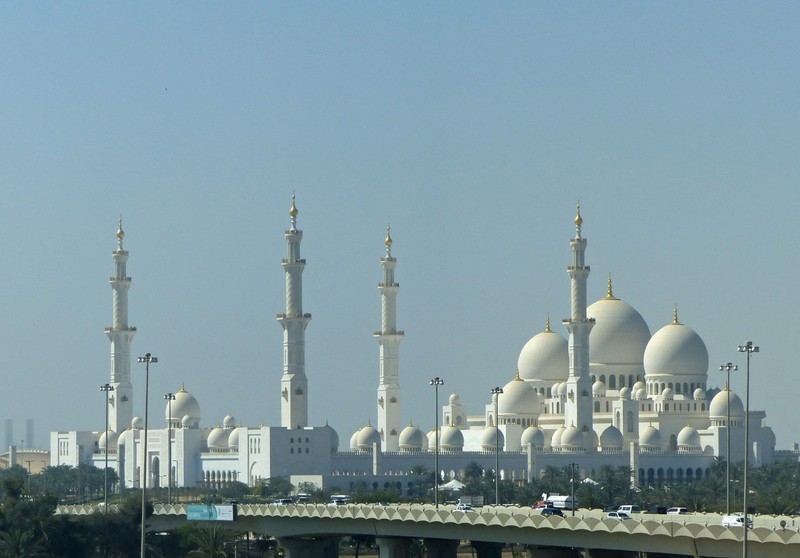 The mosque is named for Sheikh Zayed bin Sultan Al Nahyan who was the emir of Abu Dhabi and was behind the formation of the UAE, becoming its first president. His tomb is in the grounds of the mosque. When we were here the country was celebrating the ‘Year of Zayed’ to mark his achievements. Reading about him later, on my return, I discovered that he was a relatively liberal leader within the constraints of Islamic principles and a non-elective political system. Wikipedia has this quote from a 1997 interview, in which he was asked why there is no elected legislature:

‘Why should we abandon a system that satisfies our people in order to introduce a system that seems to engender dissent and confrontation? Our system of government is based upon our religion and that is what our people want. Should they seek alternatives, we are ready to listen to them.

We have always said that our people should voice their demands openly. We are all in the same boat, and they are both the captain and the crew. Our doors are open for any opinion to be expressed, and this well known by all our citizens. It is our deep conviction that Allah has created people free, and has prescribed that each individual must enjoy freedom of choice. No one should act as if they own others.

Those in the position of leadership should deal with their subjects with compassion and understanding, because this is the duty enjoined upon them by Allah, who enjoins upon us to treat all living creatures with dignity. How can there be anything less for mankind, created as Allah's successors on earth? Our system of government does not derive its authority from man, but is enshrined in our religion and is based on Allah's Book, the Quran. What need have we of what others have conjured up? Its teachings are eternal and complete, while the systems conjured up by man are transitory and incomplete.’

Al Bahia is a relatively newly developed area on the outskirts of the city – indeed it seemed to me that parts will still very much under construction. Its library is set in a much smaller (than Khalifa) but pretty park near another attractive mosque (also, rather confusingly, named for Sheikh Zayed Bin Sultan Al Nahyan), but rather on the fringes of this growing community. 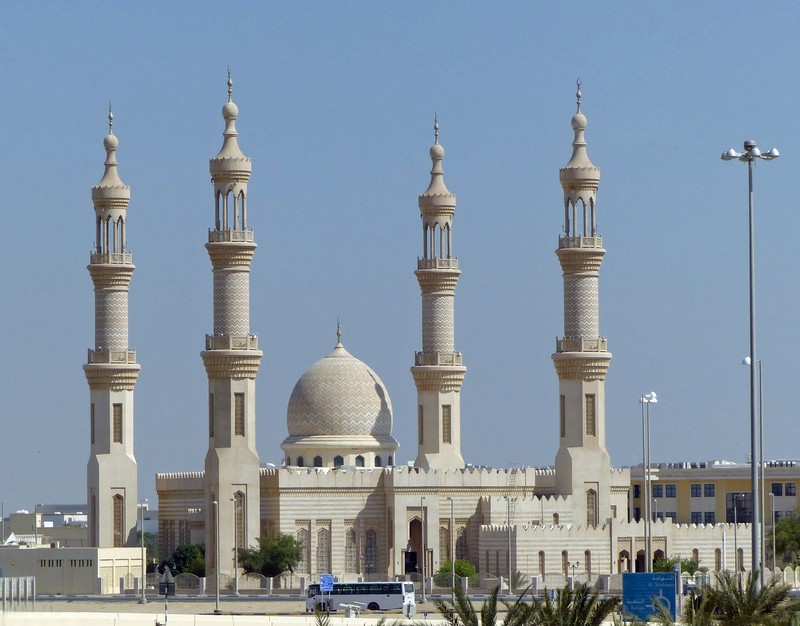 Here we met with the librarian responsible for events in all of Abu Dhabi’s libraries and had a very interesting chat about what she has done to transform the events programme so far and her ambitions for the future. 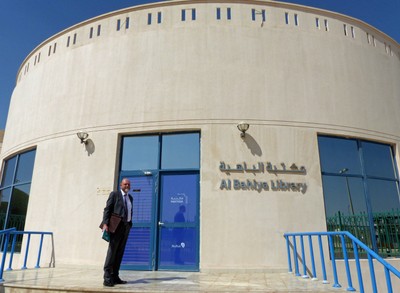 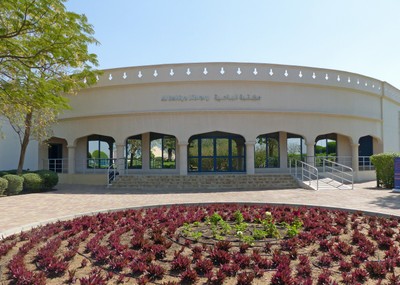 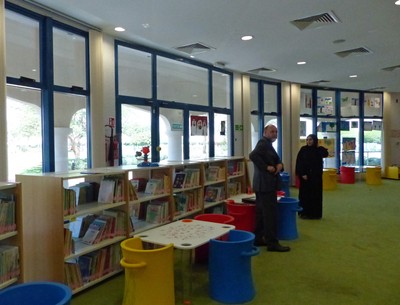 Chatting to the librarian at Al Bahia Library 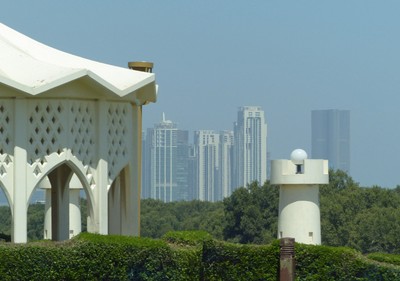 View of Abu Dhabi skyscrapers from the car

We returned to the offices at Nation Tower to meet up with the third member of our team for a couple of meetings. Between these we had an excellent light lunch at Café Bateel in the Nation Galleria, below the offices, where we sat outside on the terrace and enjoyed salads and bread with a delicious date flavoured balsamic vinegar. 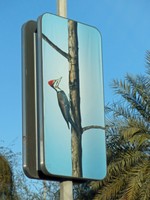 We got back to the hotel mid afternoon but I only had a short time to catch up with notes and relax in my room. Our evening started earlier than usual as we were invited out to dinner by our client here, Shaikha. She picked us up in her very nice car, a Cadillac, and drove us through the downtown area to another smart shopping mall, the Galleria, on one of the other islands, Al Maryah. 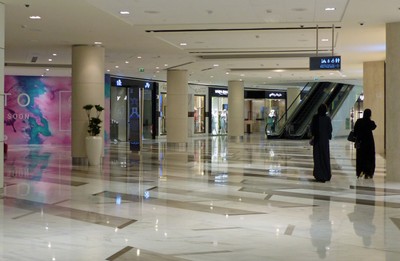 Here we ate in a restaurant, called Nolu, serving Afghan / Californian fusion food (yes, really!) According to their website: ‘We have taken the Californian "farm to table" concept and fused it with traditional Afghani dishes.’

The food was absolutely delicious, especially one of the starters, a fairly spicy dish with spinach and rhubarb (again, yes, really!) I also enjoyed my salmon kebab - the fish perfectly cooked, still pink and moist, and the rice also just right. Apparently they have been voted the best café in Abu Dhabi for three years in a row by Time Out magazine – I can see why. 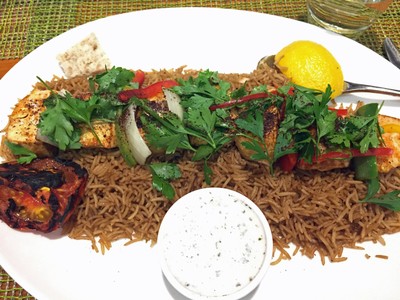 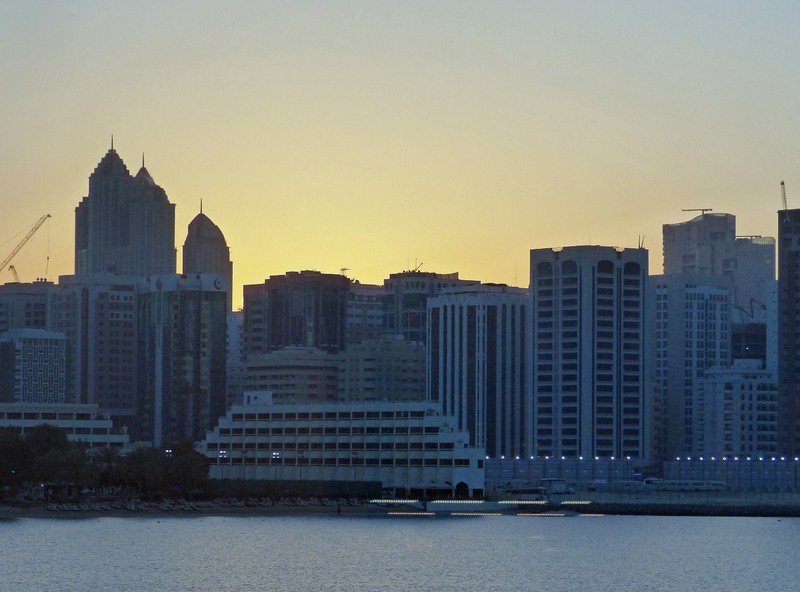 
Shaikha then drove us back past a park where she hopes one day to have a library, still busy with local families at 8.30 at night, and through a very affluent area where the streets were lined with palaces and large villas. It was a great opportunity to see more of Abu Dhabi than we had done on this trip to date.

Back at the hotel we had a quick night-cap at the bar before retiring to bed after our fullest day, work-wise, so far on this trip. Tomorrow we have an invitation to the palace …