A few hours in Punta Arenas 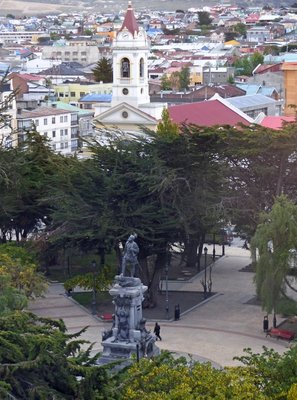 View from our room

We broke our journey back to Santiago from the Torres del Paine with an overnight stay in Punta Arenas. We took the public Gomez bus from the Laguna Amarga gate, having been dropped off there by a driver from the hotel, and transferred to one operated by Fernandez at the bus terminal in Puerto Natales. We got to Punta Arenas at 20.00 and checked into our hotel, the Hotel Cabo de Hornos on the city’s Plaza des Armas.

Although we only spent one night here we liked what we saw. We had a large and pleasant room on the top floor (the 8th), overlooking the main square, the PA. It was well supplied with all the necessities (storage, a safe, a large comfortable bed) apart from electric sockets which were very hard to find! The bathroom was also a good size, with a shower over the tub. We had complementary bottled water and biscuits in the bedroom, and toiletries in the bathroom.

We had a drink and snack in the bar that evening and found the prices very reasonable (2,500 pesos for a glass of good red wine, for instance) and enjoyed the cosy atmosphere. The evening was memorable for being the date of the US Presidential election, but although we saw a few surprise results come through on the TV behind the bar we didn’t dream that we would wake up to the news that Donald Trump had won!

The included buffet breakfast the next morning had a reasonable selection of all the usual items, plus an omelette station (which we didn't spot until we had finished eating!) The central location is a plus point for this hotel, and as this is a quiet city street noise isn't a problem. But we did find the wind (an almost ever-present feature of the climate here) very loud in our top floor room and it kept us awake at times, so a lower floor might be a better option. 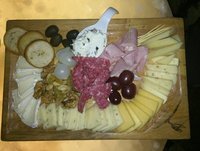 The official name for this square in the city centre is the Plaza Muñoz Gamero, but it seemed to me that all the locals we spoke to called it the Plaza des Armas. We had a good view of the square from our eighth floor hotel room and also managed to fit in a short walk there before it got too dark for photography.

The square takes its official name from a former governor, Benjamín Muñoz Gamero, who in 1851 drew up the first plan of the city. At its centre is a statue of Magellan, with figures of native people representing Patagonia and Tierra del Fuego – the 1920 work of Guillermo Cordova, placed here to mark the fourth centenary of the Strait that bears the explorer’s name. It is said that if you touch the foot of the latter, which hangs down below the plinth, you will return to Punta Arenas, and the shiny toes are witness to the many who have tested that legend. 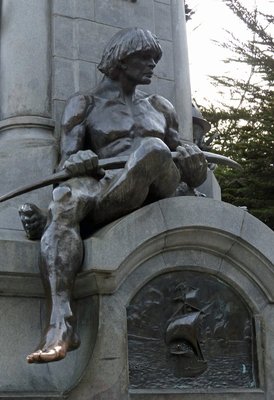 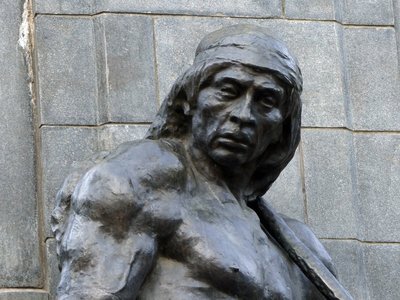 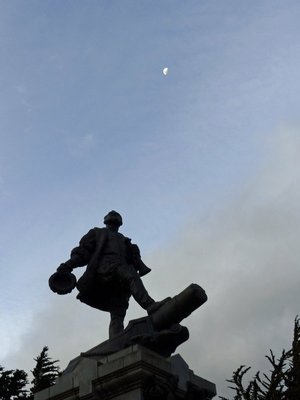 On the east side of the square, next to our hotel (the Cabo de Hornos) a plaque on the Chilean Antarctic Institute marks the former location of the post office where Captain Scott deposited almost 400 letters on 8 July 1904, announcing the safe return of his ship, the Discovery, from an Antarctic expedition. 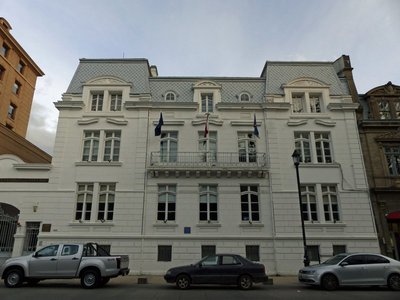 Flying to and from Punta Arenas

The airport in Punta Arenas is modern and small, with only three departure gates, but unusually for an airport of this size it also has three runways (the only one in Chile to have this number). There is a good reason for this - the winds here are strong and almost constant, and having a choice of runways enables planes to take off whatever the wind direction.

We flew here initially from Calama via Santiago, on our way to Puerto Natales, and after our stay in Patagonia flew back from this airport to Santiago, via Puerto Montt where the plane stops to refuel and drop off / pick up passengers (through passengers don't alight).