On to Puerto Varas 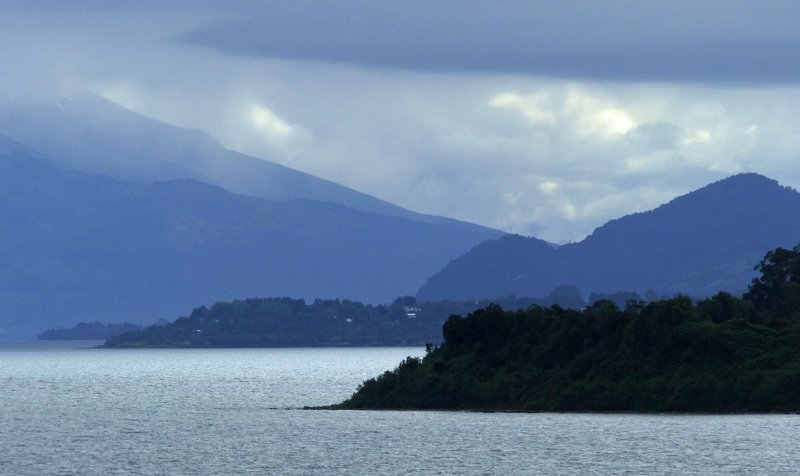 After a few days in the Atacama Desert we flew south to stay in Puerto Varas, in Chile's Lake District.

Puerto Varas is the main town on Lago Llanquihue and its shoreline setting is its main attraction. We spent a few nights here, using the town mainly as a base for trips around Chile’s “lake district”, but also getting to know this likeable small town. Puerto Varas was founded by German immigrants and the Germanic influence is still strongly seen in the architecture and cuisine of the area. I loved the old shingled buildings and the relaxed feel of a town that is today primarily focused on tourism and outdoor activities.

We didn’t enjoy the best of weather here (in fact it was the worst of our time in Chile), but that’s par for the course in a place so blessed with mountains and lakes. We only got one brief glimpse of the volcano that watches over the town from the far side of Lago Llanquihue, Volcan Orsano – but at least we did see it! 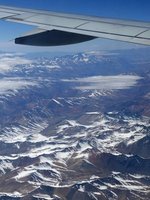 To get to Puerto Varas we flew with Latam from Santiago to Puerto Montt , a flight of less than two hours. Snacks were served on board at no extra cost. We were to get very used to the Latam refreshment service which on all our mainland internal flights consisted of a choice of any two of four items which were illustrated on a card menu – the cheese scone became something of a favourite with both of us.

The views of the Andes on first leaving Santiago were fantastic (to see them well sit on the left-hand side of the plane when flying south, as always in Chile) but as we flew south the clouds built up and we landed, on time, to grey skies and a chilly wind.

We had pre-arranged a transfer and Jorge was there to meet us for the approximately thirty minute drive to Puerto Varas through pleasant green countryside that didn't look a lot different from home. All in all a very smooth journey.

After our first choice of hotel proved unavailable our tour company, Real World Holidays, booked us a superior room here at no extra cost – and it was pretty superior! We had extensive views of the lake and a small balcony from which to enjoy them (in theory, although the weather when we were here was too dull and windy to make sitting on a balcony an option). Inside we had loads of space, a huge bed, plenty of storage, and all the necessities for a comfortable hotel stay. The wash basin was conveniently separate from the rest of the bathroom, which had a shower over the tub. Toiletries and a hair-dryer were also provided. We also got the best “hotel turn-down service chocolates” I can ever remember eating – really excellent dark chocolate with luxurious fillings! 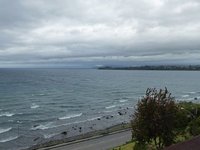 Our room - and the view we had from it

The public areas of this hotel are especially attractive, with picture windows in the lobby, bar and restaurant all overlooking the lake and making the most of the setting. Breakfast is served in the restaurant and I thought it a good buffet, with lots of fresh fruit, juices, cereals, breads, eggs etc., cold meats and assorted cakes and pastries. The coffee was better than average for Chile too, and eating breakfast with a view like this one is a bonus, however dull the weather. 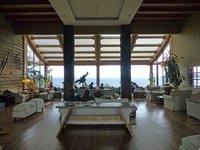 Restaurant at breakfast time, and lobby bar with lake views 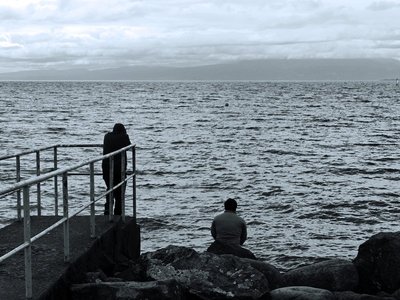 On the town jetty

Puerto Varas is the main town on Lago Llanquihue and its shoreline setting is its main attraction. A footpath follows the water's edge and affords great views of the two volcanoes of Osorno and Calbuco watching over the lake - but only on a clear day, which we didn't manage to get unfortunately, although Osorno did sort-of show itself very briefly on our last morning.

Unsurprisingly watersports are popular here - we saw windsurfers and a sailing race during our short stay. You can also do day trips on the lake to other small towns such as Frutillar, but we didn't have time for this.

At 870 square kilometres Llanquihue is the second largest lake in Chile (after General Carrera on the Chile/Argentina border) and was created during a period of glaciation in this part of the country. It is roughly triangular in shape, with Puerto Varas at its south-western corner and the classically shaped Osorno dominating the eastern shore – when visible! This volcano lies in the western foothills of the Andes and that side of the lake is mountainous and forested in contrast to the Puerto Varas side which is pastoral, with small villages and dairy farms dotting the rolling hills. 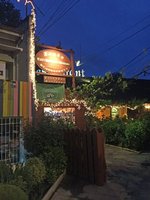 This was our choice for dinner on the first evening of our stay in Puerto Varas. On a dull, drizzly evening with a cold wind blowing in off the lake, the cosy restaurant set in a pretty garden strung with fairy lights was such a welcoming sight. And the welcome continued inside, with a friendly waitress who spoke some English and took the time to answer any questions we had about the menu (which was also available in English). 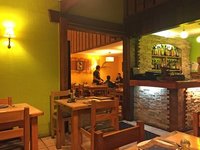 As soon as you are seated here you are brought something to nibble on while deciding what to order – some hot sopapillas with tomato salsa and salmon ceviche – delicious. We ordered some beers (Patagonian Austral Lager) to have with these and chose our main courses – congria, a local fish, for me and pork chops with sauerkraut for Chris. With my fish I could choose one of the side dishes on the menu so I opted for the sautéed potatoes. These were excellent, although I found the fish slightly underdone for my taste (I like tuna and swordfish served that way but not white fish). Chris liked his pork chops and the accompanying spicy mashed potato was good too, but the sauerkraut not really "sour" enough. 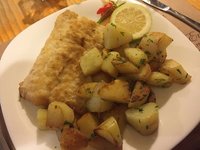 Still, overall our impression of the food was pretty good, and that continued with our deserts of pineapple sorbet and fresh pineapple. With a third shared beer our total bill, with service, was 36,000 pesos – very good value and a good start to our time in Puerto Varas.