Looking down on Santiago 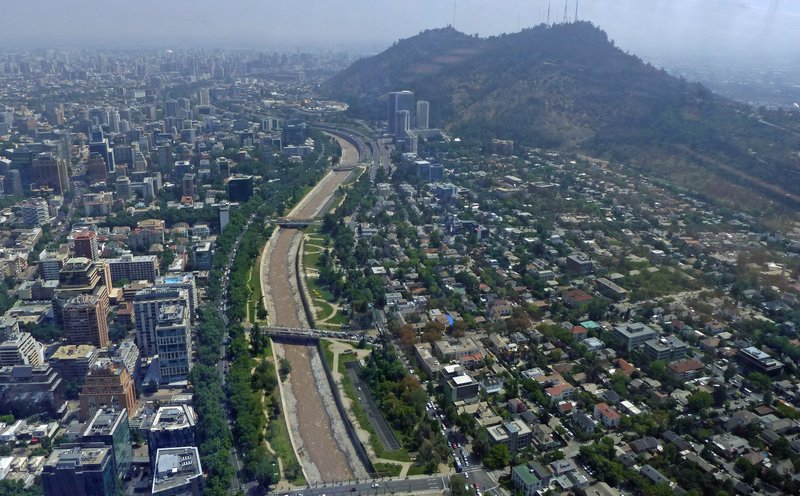 Having spent the morning in the area in and around the Plaza de Armas, and climbed the small hill of Cerro Santa Lucia (see previous blog entry), we were ready for some refreshment. We came across a sort of hippy market set up near the Universidad Católica metro station (think tie-dye crafts, New Age paraphernalia such as crystals, and vegan food) and bought some veggie wraps and fresh juices from a food stall there. We then headed east on the Metro's red line 1 to Tobalaba station.

Our destination was the Sky Costanera viewing platform. This is the tallest building in South America (as of 2016) and the second tallest in the Southern Hemisphere, standing 300 metres / 64 stories high. Its observation galleries on floors 61 and 62 are open every day of the year, or so they claim, but I’ve seen one tourism website suggest that they are closed “on the 1st of January, 1st of May, 18th and 19th of September and the 25th of December”. Properly it is this observation level that is called Sky Costanera, as the official name of the tower itself is Gran Torre Santiago. It forms part of a larger shopping mall in the eastern part of Santiago, the Costanera Centre, and we headed over there on the afternoon of our first day in the city, keen to check out the views of the city and its surrounding mountains. 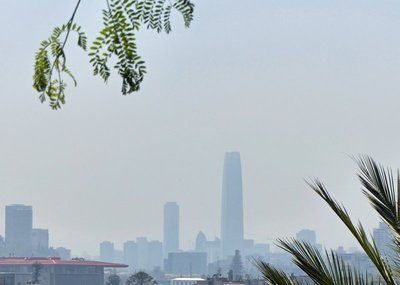 Gran Torre Santiago as seen from the Cerro Santa Lucia

We walked through the very busy shopping mall to the ticket office on the lowest floor of the complex. We had thought we might have to queue but it was pretty quiet and we went straight from ticket desk to lift without waiting. The lift attendant doubles as guide and ours checked what languages his passengers spoke before giving a brief introduction to the observation deck in Spanish as we rode up, which he then helpfully repeated in English on arrival. I got the impression that all the staff here are well-trained in looking after visitors and also proud to work in the city’s highest building and newest attraction (it opened in August 2015).

The arrival floor, the 61st, is completely enclosed. There are free-to-use telescopes at strategic viewpoints and lots of information boards explaining what is to be seen in each direction. Unfortunately pollution and atmospheric conditions mean that the highest of the Andes mountains that surround the city are often obscured, and so it was when we visited, but the view was still pretty spectacular, and I loved the sensation of being so high. But the glass does make it a little hard to take photos, and that is the case too on the floor above (accessible by escalator / moving staircase) which is open to the elements above but still completely enclosed on the sides. There are no telescopes here and no information boards, so we didn’t linger so long – I’d hoped that photography might be easier but reflections from the glass were no less intrusive. 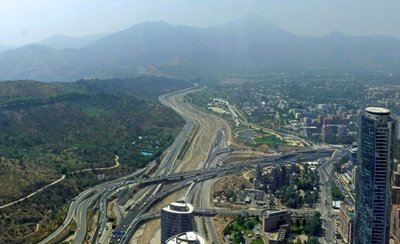 Back on floor 61 I thought there might have been refreshment facilities so you could get a drink while admiring the view, but that isn’t the case (maybe it is something they will add? It is after all a very new attraction). For now a half hour visit will probably be enough for most people, as it was for us, but you might want to consider coming late afternoon and lingering through sunset and into the evening to see the lights come on over the city. But whenever you come you are bound to be struck by the views over the city and beyond and by the sensation of being so far above the ground – assuming that is that you have a reasonable head for heights (I wouldn’t recommend this if you don’t, as the glass walls go right down to the floor). 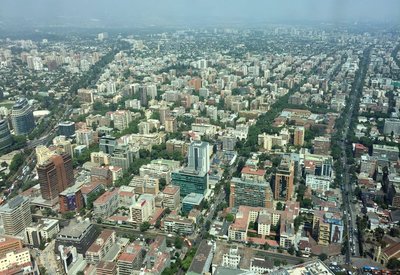 Returning to ground level, and to the shopping centre, we stopped to shop for an adaptor as those we had brought with us had proved unsuitable for Chile's wiring system (the sockets here look like those on continental Europe but are just a tiny bit smaller), and for an ice cream at the highly recommended Emporio La Rosa, before heading back to our hotel in the Providencia district - an easy Metro ride to Manuel Montt station.

That evening we ate at Pipeño Mesa Chilena, just down the road from our hotel – we liked this restaurant so much in fact that we ate here twice while in Santiago. On both occasions we sat on the terrace at the front, as did all the other customers, but I imagine that the dark interior is cosy on winter evenings. Service was friendly and well-paced. There are usually English menus available, although on our second visit two weeks after the first they had just changed the menu and not got around to producing English versions so we had to combine guess-work with what Spanish we had picked up and the old English menu which had some of the same items!

On this first visit we enjoyed pisco sour apperitivos (traditional for Chris and one with green herbs for me – excellent!), a cover of sopapilos with salsa, a shared starter of beef and cheese empanadas, steak "a la pobre" (a traditional Chilean dish of beef served with egg and chips) for Chris and a chickpea and quinoa veggie burger for me, plus a lager for Chris and glass of very good red wine (Cabernet Sauvignon) for me. A great way to end our first full day in Chile! 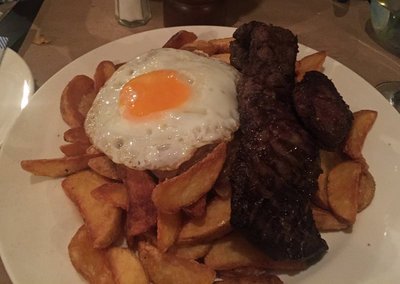