South through the Western Ghats 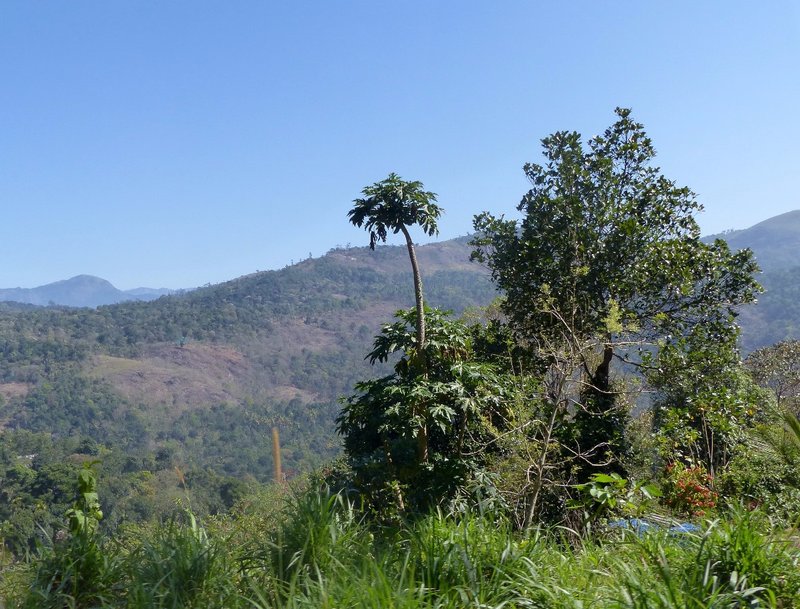 On our second morning at Bracknell Forest we awoke to the much pleasanter sound of birdsong, so yesterday's generator noise was clearly, and thankfully, an isolated occurrence. 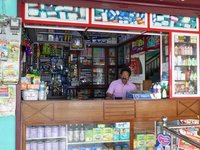 After breakfast we said goodbye to our wonderful view and to the friendly staff, and Unni drove us south on the winding roads of the Western Ghat. For much of the journey our route was lined with forest but we had plenty of glimpses of the mountain ranges around us through the trees as the road constantly wound down into small fertile valleys and climbed up the other side. From time to time we passed through villages or small towns, the latter especially a hive of activity. We stopped in one as I needed to buy some antiperspirant - the friendly shop keeper was keen to chat about where we came from and handed out free cough sweets with our purchase!

We also stopped briefly to photograph a strikingly large church which Unni told us was built just two years ago, near Mailadumpara. This is the Velankannimatha Church, a shrine to Our Lady of Good Health or Our Lady of Velankanni, who is said to have appeared in the Tamil Nadu town of that name three times. In the mid 16th century she was seen by a shepherd boy delivering milk whose jug she refilled, and to another young boy lameness she cured. He had a chapel built in her name. Later, in the 17th century, she is said to have appeared to Portuguese sailors whom she rescued from a storm. It should be noted however that the Holy See has not approved these apparitions and they are recorded only in oral tradition. But clearly that hasn't deterred the faithful as there are churches in her name in several places in India and elsewhere in the world. I have not been able to find out any details about this particular one - it seems to be too new for any information to be available. 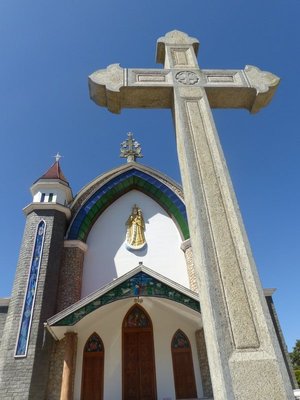 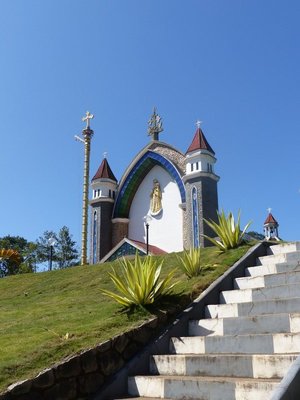 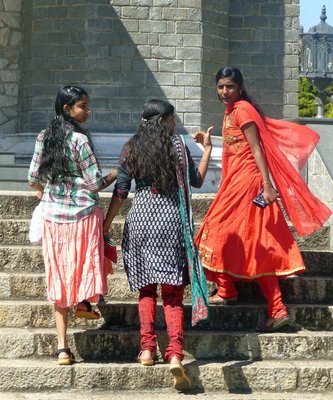 Soon after midday we arrived in Kumily, where our base for the next two nights was to be the Cardamom County Hotel. This is a medium sized place with rooms in small blocks built on the hillside. Ours was about two thirds of the way up so necessitated climbing quite a few stone steps - this hotel is not suitable for anyone with mobility problems. Once reached the room was a generous size and nicely furnished, with two single beds pushed together. The bathroom was big too, if a little basic in appearance. We had a minibar with complementary filtered water, a flat screen TV, safe and reasonable wifi. All the rooms have balconies or terraces but I felt the view from ours was disappointing - the hotel website says that these standard rooms have views of the bamboo forest but ours looked out on to the side of another block and a sideways view of the hotel grounds below. But no worries - we don't spend a lot of time in our hotel room, apart from sleeping! And with this one caveat, this was to prove our favourite hotel of the trip, thanks to the excellent service, attractive swimming pool and visiting monkeys! 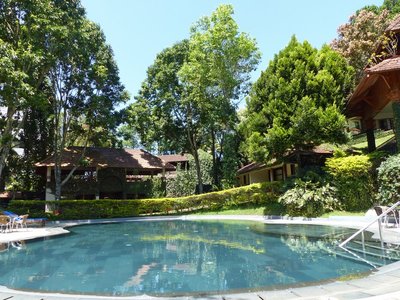 We had lunch at a shady table next to the pool, sharing a tuna sandwich and fries (an ample sized portion for two). 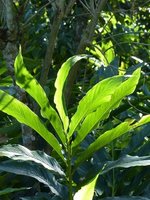 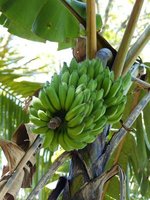 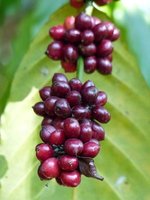 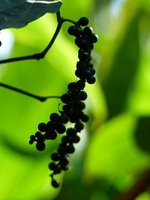 This area is famed for its spice growing - indeed these hills are the Cardamom Hills. Kumily is surrounded by plantations many of which offer tourist visits, and their advertising hoardings lined the road as we arrived. Our tour company had arranged something slightly different for us. Their local agent here, Manu, has his own small plantation, which has been in his family for three generations, and he met us there to show us around.

We had arrived towards the end of the harvesting season for two of his main crops, pepper and coffee, so we only saw limited amounts of both still growing in the plantation but enough to be of interest. We also saw jack fruit, bananas, cloves, papaya, chillies, nutmeg, cardamom, cinnamon and vanilla. Our host explained how each was grown and harvested. Vanilla, for instance, has to be pollinated by hand as there are no natural pollinators, and the beans once picked must be fermented for days at precise temperatures - hence the high cost. And cardamom doesn't have a specific harvest time as its berries ripen erratically. Some women were harvesting pepper as we passed, perched rather precariously on ladders propped against the trees up which the pepper vines climb. 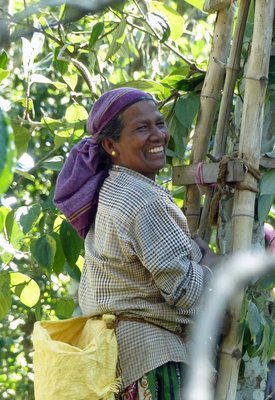 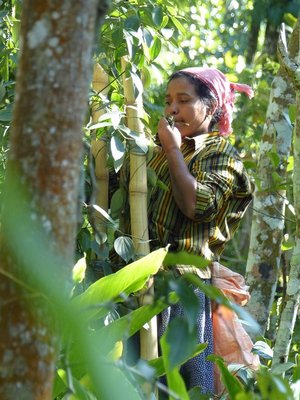 After our walk Manu asked if we would be interested in seeing the small selection of spices they sell directly and we agreed as it seemed much better to make our purchases directly from the vendor (many of the spice shops in town sell produce that isn't local but which can come from anywhere in India or indeed beyond). So we were invited into a room in his house, where we met his wife and daughters, and made our selection - some black peppercorns and dried chillies as these were two of the crops we had seen growing.

We thoroughly enjoyed our walk with Manu and felt this was far better than the sort of commercialised guided tour we would have got at one of the other places we had passed.

In the evening our hotel staged a short (30 minute) classical dance performance, with two young dancers. It took place in the rather sterile atmosphere of their conference hall, but the dancers were excellent and we could really appreciate the skill involved in this style of dancing, where not only foot work but also precise hand movements and facial expressions are needed. 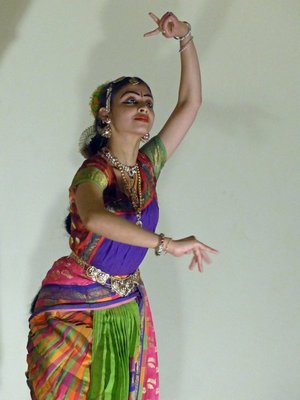 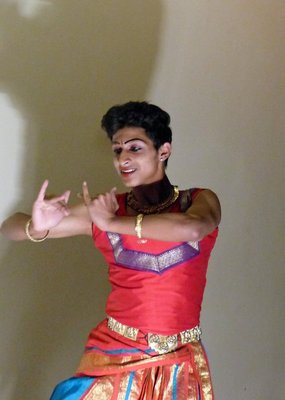 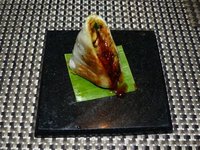 We then had dinner in the hotel restaurant where you have the option of a buffet meal or ordering a la carte. We chose the latter - I am no fan of buffets other than at breakfast time, as I mistrust food that has sat too long unattended and also, when paying for restaurant food, like to have someone serve me at table! We had a very good meal, with an 'amuse bouche' of a small vegetable wrap (delicious), excellent shared starter of chicken marinated in yoghurt, then chicken biryani for me and chicken tikka makhani for Chris - both very good and served in far too large a portion for us to want dessert. With two large beers we paid 2,000 rupees - the most expensive meal to date on this trip but still a bargain by UK standards (about £25).

We were also impressed by the friendly service of our waiter, Saju, who was to prove a real star over the next couple of days.