We were up early today, both because we needed to for a fairly early departure to Pyongyang but also because loudspeakers outside were, from 6.00 am, blaring out what we took to be exhortations to get up and get to work.

We had other plans, although not (as I mentioned in my previous entry) our original ones for the day. Our tour itinerary should have taken us today from Kaesong to Mount Myohyong, but the weather, in the form of Typhoon Ling-Ling, known more prosaically here as Storm Number Thirteen, had other ideas. So after breakfast we checked out and set off on the drive back to Pyongyang, waved on our way by the friendly hotel staff who braved the windy conditions to see us off. 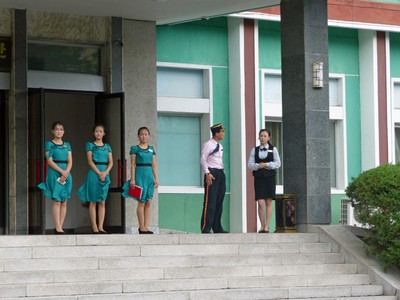 Farewell to the Janamansan Hotel

Our guide had worked hard, making a number of phone calls, to ensure that we had something to do as an alternative to the original plans for the day. As a result, this morning we had an interesting stop planned at a collective farm. Yes, visiting a farm might not be top of the tourist to-do list in many destinations, but in North Korea just about everything is interesting, because life is so different here. And none of us was going to let the rain spoil the experience!

We turned off the Reunification Highway (which I have written about in an earlier entry) by the rest area where we had stopped on our way to Kaesong two days ago. The road led up an attractive valley, with a river running through it and fields planted with rice, maize and other crops. Every so often we passed a small village and our guide explained that each was home to a sub-work team and their families. She told us all about the two types of farm here – the State Farm, where farm workers are paid a salary for set hours, much as in a factory; and the Collective Farm, where workers receive a share of the profits in proportion to the amount of work they have contributed, and also some crops which they can use or sell. Workers are organised into work teams, with these being broken down into the sub teams. 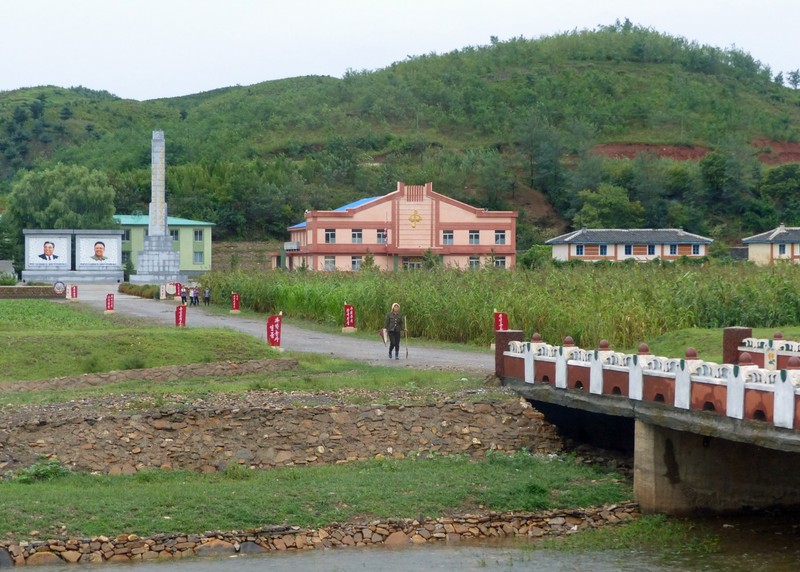 Arriving at the collective farm


We turned off the road to cross a bridge into what seemed to be a central administrative area of the farm. There were the usual twin images of Kim Il Sung and Kim Jong Il, and opposite them an Immortality Tower, also sometimes called an Eternal Life Tower or in Korean, Yeong Saeng. Every city, town and village has one of these. They were erected throughout the country at the behest of Kim Jong Il after the death of his father. They all carry the same reminder of Kim Il Sung's immortality: 'The Great Leader Comrade Kim Il Sung is with us for Eternity'. You will no doubt spot them in some of my other photos in various parts of the country – there are said to be around 3,000 in total and although we didn't see anything like that number I did spot a fair few! 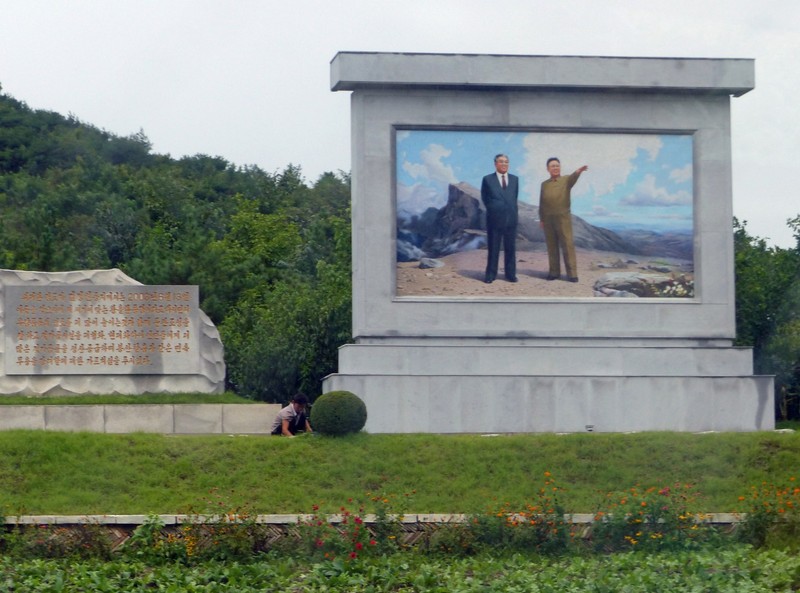 Mosaic of Kim Il Sung and Kim Jong Il
~ with assiduous gardener ensuring all looks as beautiful as possible, even in the rain

I don't think this farm can see many tourists (although a Dutch group was also here when we were) as the local children seemed very curious about us. 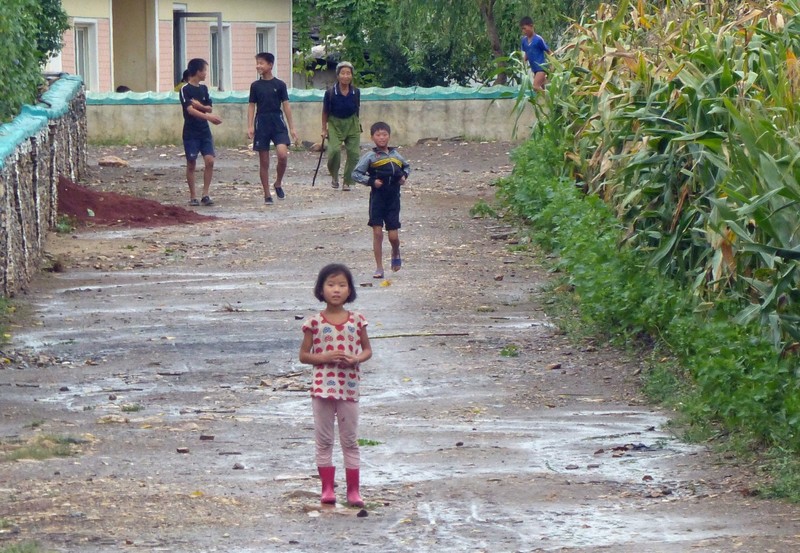 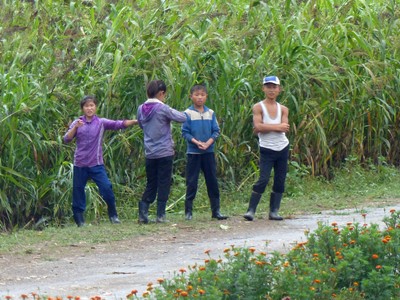 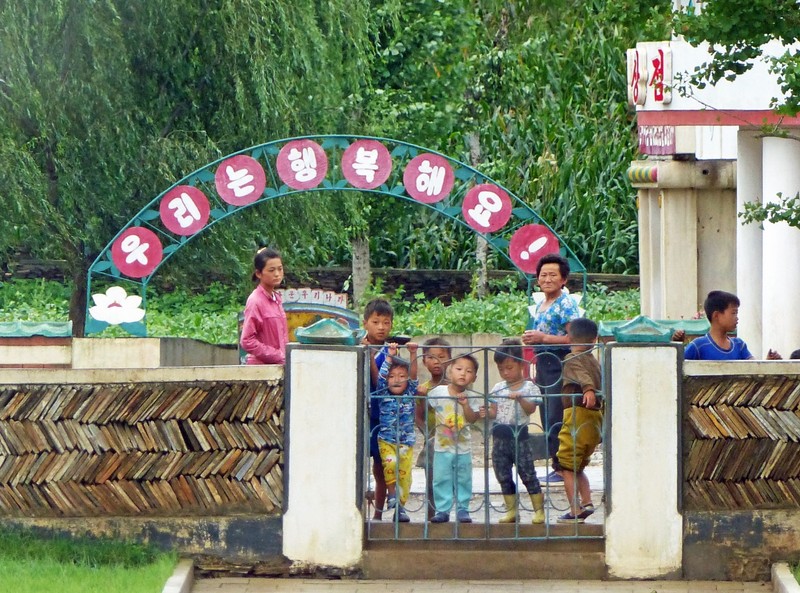 
Most of the farms specialise in a particular crop, and although we were passing through this fertile valley, the specialism here is goat farming. At our first stop, near the head of the valley, we had the chance to buy some of the cheese they make - a generous plateful for 1€. We didn’t bother, but one of our companions, Jan, did get some and offered me a taste. I found it a little bland but not unpleasant.

But the main purpose of this stop was to see a performance of the masked dancing traditional to this area. We sat on benches under the dripping trees while the dancers and musicians braved the rain to put on a great show for us. We had been joined by a group of Dutch tourists and their guide explained (in English, not Dutch) the story being acted out, which was simple enough to follow. It was called something like ‘The Tricked Landlord’ and set in the days of the feudal system. The main body of dancers represented the poor people, who were oppressed and beaten by the land-owners before overcoming them and celebrating their downfall. 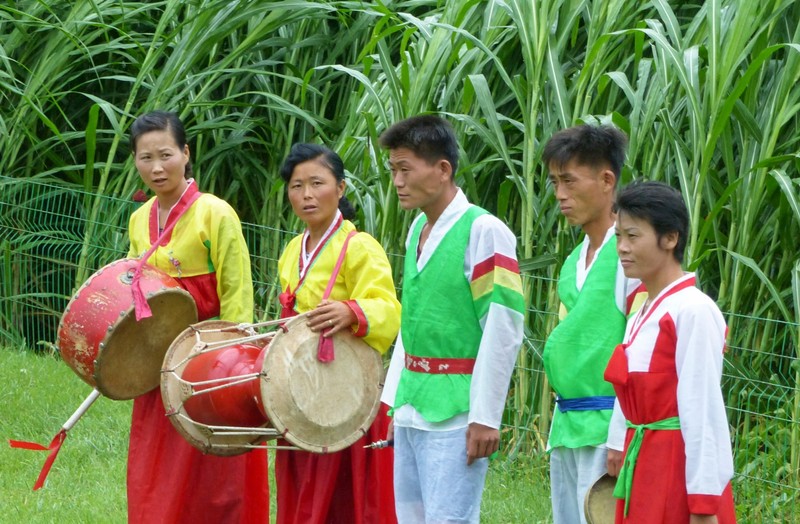 Musicians for the masked dancing 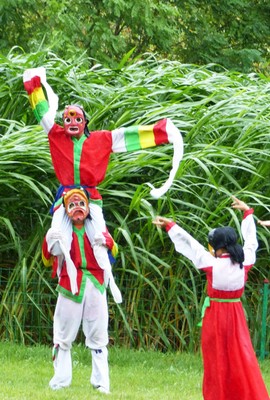 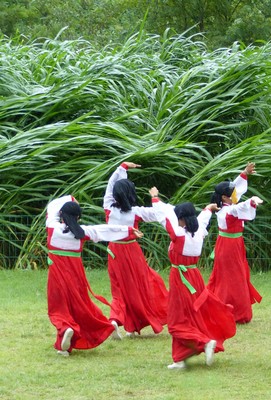 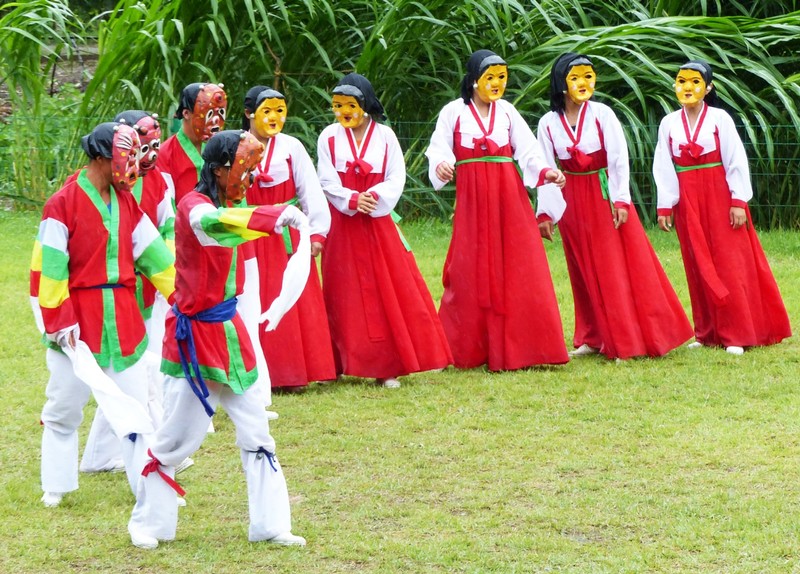 It wasn't easy taking photos in the rain and I was grateful to my travelling companion Jane who kindly shared her umbrella, allowing me to shoot some video clips too:

After the show we drove back down the valley and stopped by an intricate mosaic map of the farm - so intricate that it even showed itself! A local guide explained more about the farm, with our own guide translating, but I confess I was more interested in taking photos of nearby farm workers who seemed happy to let me do so – one even paused in her work to pose with a lovely smile. 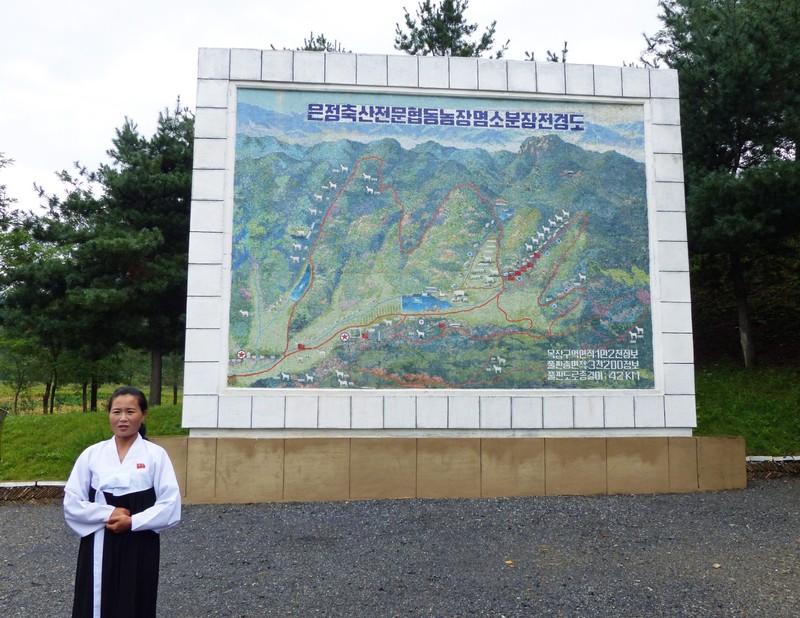 The mosaic map and local guide 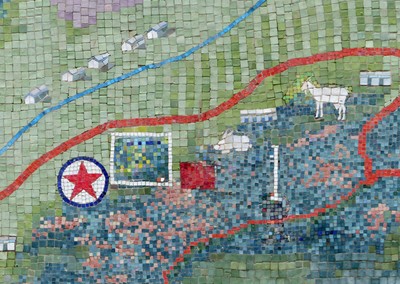 Detail from the map
~ showing itself! 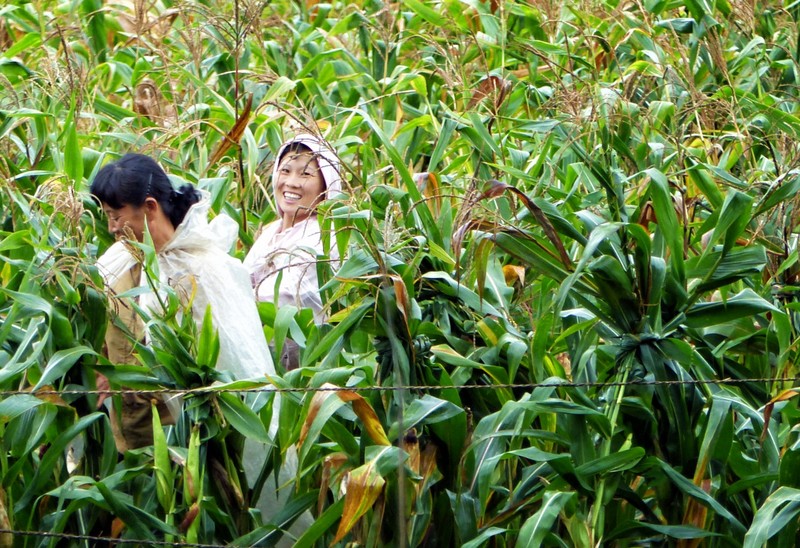 
We had been told we would also visit a house, but as can happen here that part of the visit was dropped without explanation. Despite this, and despite the rain, the farm visit had been a fascinating experience.

Driving back to Pyongyang

When we got back to the highway we stopped at the rest area, the Sohung Tea House. The stalls that had been outside on our journey south were nowhere to be seen, because of the bad weather, but inside and upstairs we found the refreshments we wanted and also a great viewpoint for photos of the near-empty road. 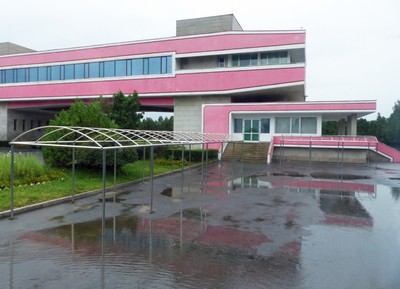 Sohung Tea House in the rain 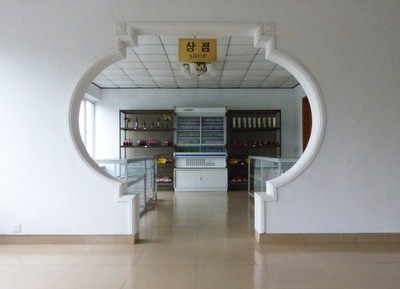 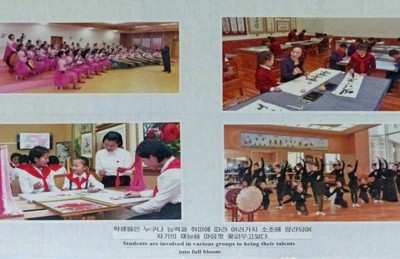 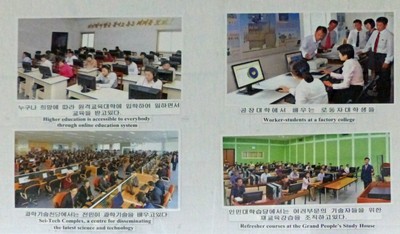 Inside the Sohung Tea House - some interesting displays! 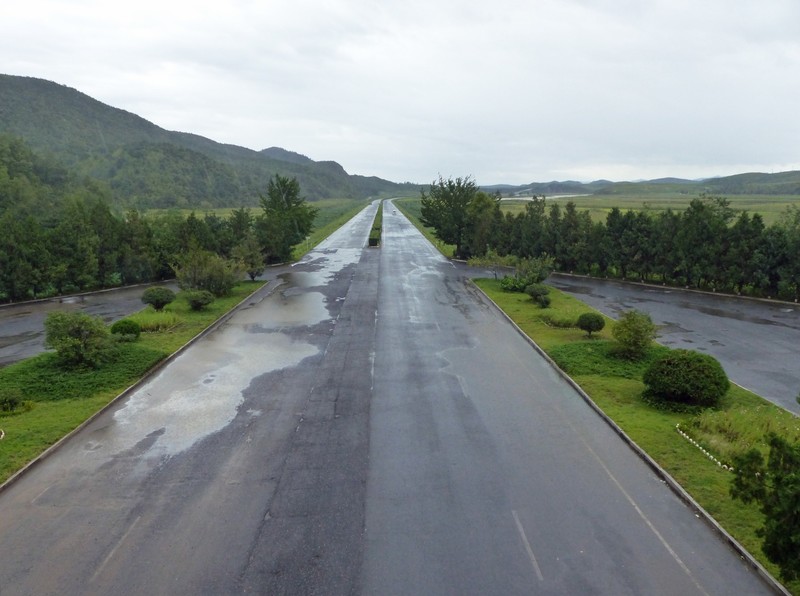 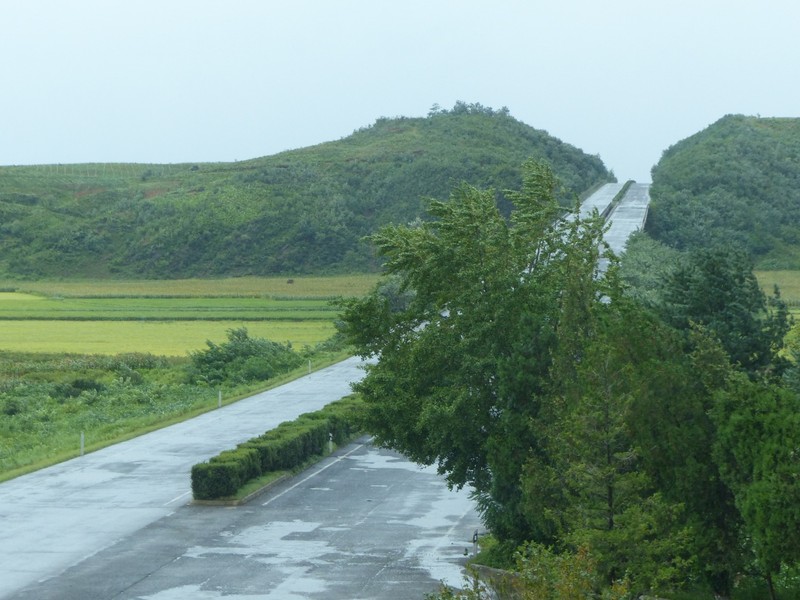 From here we drove straight back to Pyongyang, arriving at lunch-time. We went to the Tulip Restaurant in Ryomyong New Town, surrounded by some of the city’s most modern apartment blocks and with possibly even more over-the-top décor than is the norm here! 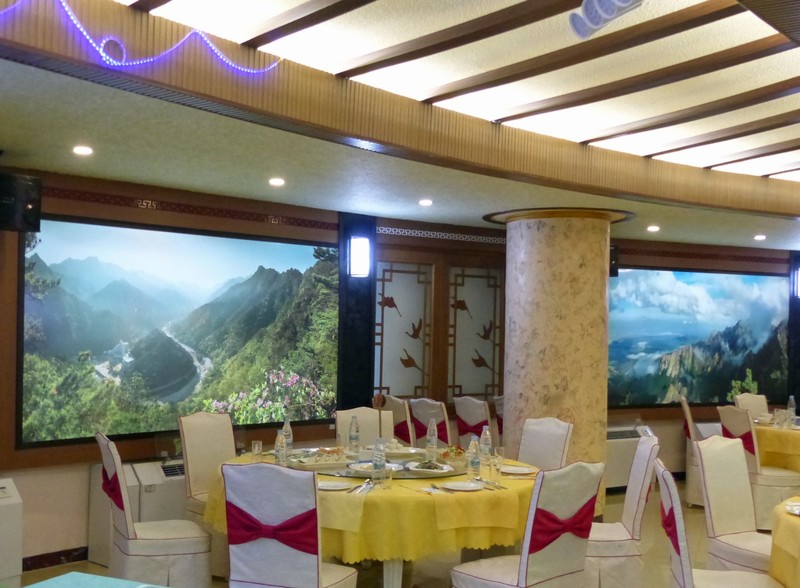 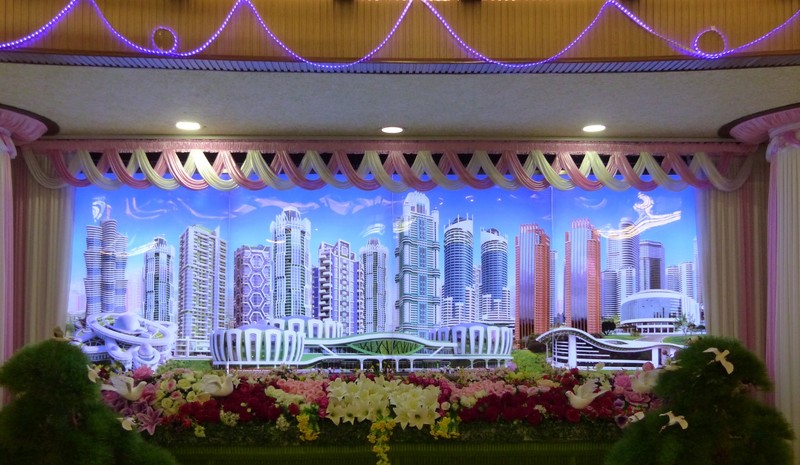 In the Tulip Restaurant in Pyongyang 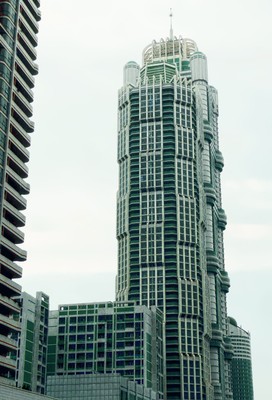 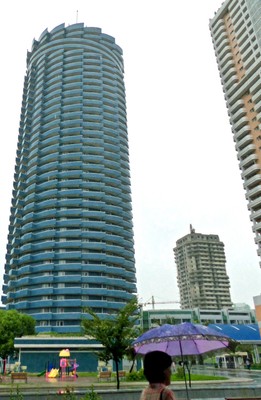 Ryomyong New Town in the rain

Soon after getting to the restaurant Carl told us that with the storm approaching the state authorities had ordered that only essential travel would be permitted. Tourists already in Pyongyang should stay in their hotels, those elsewhere were not to travel to the city but to stay put. So after a much more leisurely lunch than usual we braved the elements to make the short dash to the bus and drove to the Koryo Hotel to check in – probably for three nights, possibly fewer, depending on what plans our guide could make for the next few days. 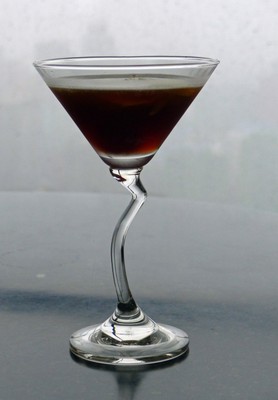 Cocktail at the revolving restaurant

We were given the same large room / small suite as previously, with unfortunately the same hard beds. I was pleased to see however that my ‘fix’ of layers of blankets on the bed was also still in place, reinforcing an impression that the room was allocated to us for the duration of our time in the country and explaining why the decision to return to the capital had been so easily taken.

Having an enforced afternoon at leisure wasn’t any real hardship. We used some of the time to catch up on photo sorting and I wrote up some blog notes. Then we visited the revolving restaurant on the 45th floor for a drink. We joined a few of our fellow travellers for a relaxing hour there. For most of the time it wasn’t actually revolving, but the view over the rainswept city was impressive nevertheless, albeit impossible to photograph through the rain-spattered windows. Although the weather was bad, it didn’t seem at the level we expected of a typhoon but the TV news on behind the bar showed that the damage in some parts of the country was significant.

We enjoyed some ‘interesting’ cocktails – Chris’s Screwdriver had no orange juice (it was more like a vodka tonic) and my Cacao Fizz had no fizz and was coffee flavoured rather than chocolate, but came in a stylish glass and tasted pretty good.

Dinner was in the Koryo restaurant next door to the hotel. It was the usual sort of assortment, with some nice dishes (a sort of duck stew, some scrambled eggs) and others less so (cold battered fried fish!) Afterwards we joined some of the others in the ground floor hotel bar where, for a change, I had some ice cream with chocolate sauce and fruit salad (tinned) rather than a drink. We had a very pleasant evening chatting to our new friends and also met some of our young student guide’s family (father, sister, grandmother) who had taken advantage of our unexpected return to the city to pop in and see him.