Of valleys and the setting sun 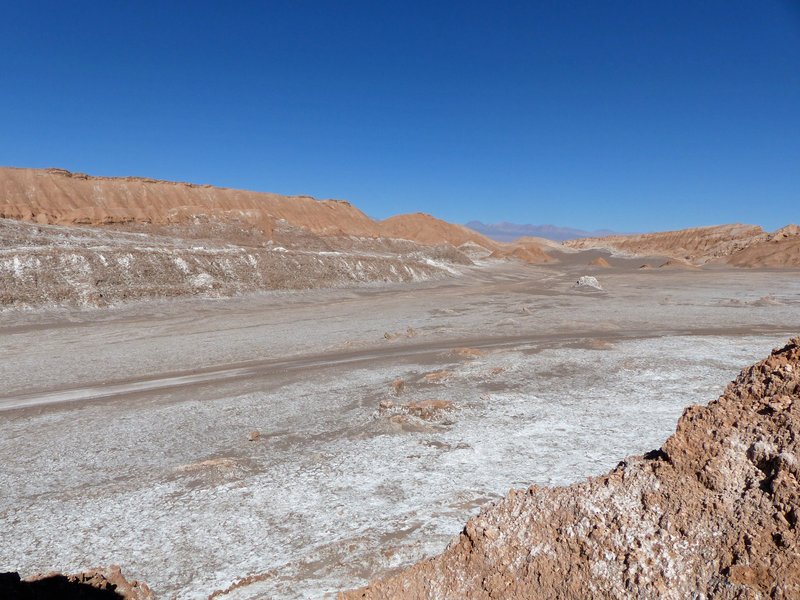 The last of the three tours we did while staying in San Pedro was a late afternoon visit to two sights quite close to town, starting at the Valle de la Luna – the Valley of the Moon. This area is part of the national park, the Reserva Nacional los Flamencos, so an entry fee of 2,000 pesos is charged, payable at the small visitor centre at the entrance. Our guide Paula sorted this for us and we were off, driving into the valley. 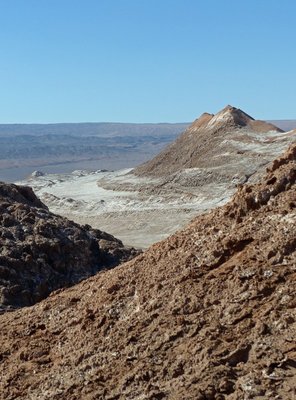 The Valle de Luna gets its name from the dramatic scenery here which has been likened to the surface of the moon. There are high cliffs carved into weird shapes by the elements and sparkling with the concentration of salt crystals in the rocks; drifting dunes of reddish sand; long-dried-up saline lakes and bizarre outcrops.

A single road winds through the valley, crossing the white expanse of the former salt lakes, and although this a popular sight with tourists it isn’t too difficult to find a quiet spot from which to appreciate this sometimes eerie landscape.

Paula took us to one such spot, where we climbed a short hill to a ridge from where we had fantastic views of the valley below. In a hollow up here she showed us the entrance to an old salt mine, and nearby some rusting salt-mining equipment had been abandoned.

The ground and the surrounding rocky hills all gleamed white with the salt, and in places the ground even crunched under our feet. These salt deposits are all that remain of ancient, evaporated inland seas, and they rise to the surface on the (rare) occasions when it rains in the Atacama.

In 2013 there was a huge rainstorm here which flooded the valley floor and left a salty crust in its wake. While the salt is still mined elsewhere in the desert, all mining ceased in the Valle de la Luna in the early 1980s when the area was declared a nature sanctuary.

Near this spot, just where the road through the valley peters out, we visited the formation known as Tre Marias – the three Marias. They are so named because they supposedly look like three women at prayer. Or at least they did, before one stupid tourist decided to climb on the left-hand one and it broke. One account mentions that this was a British tourist while another says Brazilian – I suspect that guides like to change the nationality to match that of the people they are guiding! Nearby another rocky outcrop resembles the head of a tyrannosaurus rex – sort of! 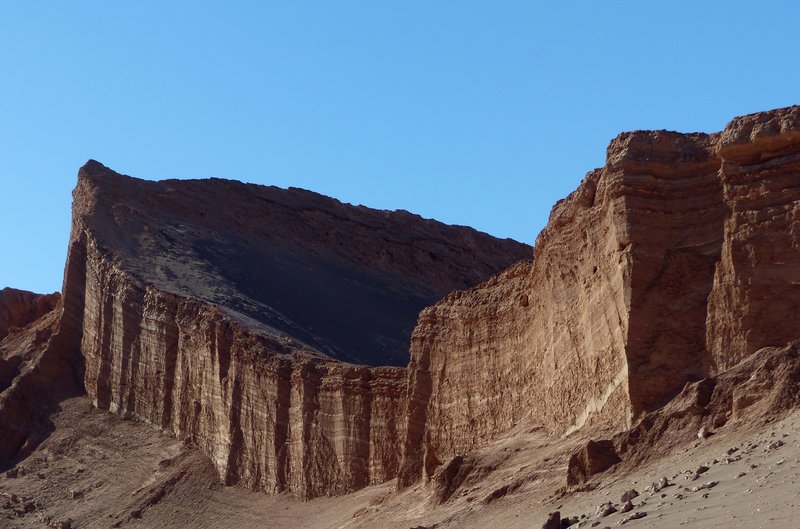 The single most dramatic feature that we saw in the Valle de la Luna was the sweeping semi-circular rocky cliff known (for obvious reasons) as the Amphitheatre. The scenery around here demonstrates perfectly the classic Moon Valley juxtaposition of mountain and sand. Look at the way that sand is piled up against the lower half of the rock formation. This is how dunes are created here – they are not hills only of sand, but of sand that has drifted across and over the hills and mountains of the Cordillera de la Sal, the salt-laden range that runs through this part of the Atacama. The range was formed when an old dried-up salt lake was forced upwards and folded by the movement of tectonic plates. In the Amphitheatre formation you can see very clear the different strata, many of them white with salt, folded by the immense pressure of the earth’s movements.

As a striking contrast to the red rocks, amber sands and white salty crust, you can look beyond the Amphitheatre (looking north, towards the park entrance) to see the soft blues and grey-green shades of Volcan Licancábur standing guard over San Pedro. This was perhaps my favourite view in the Valle de la Luna. 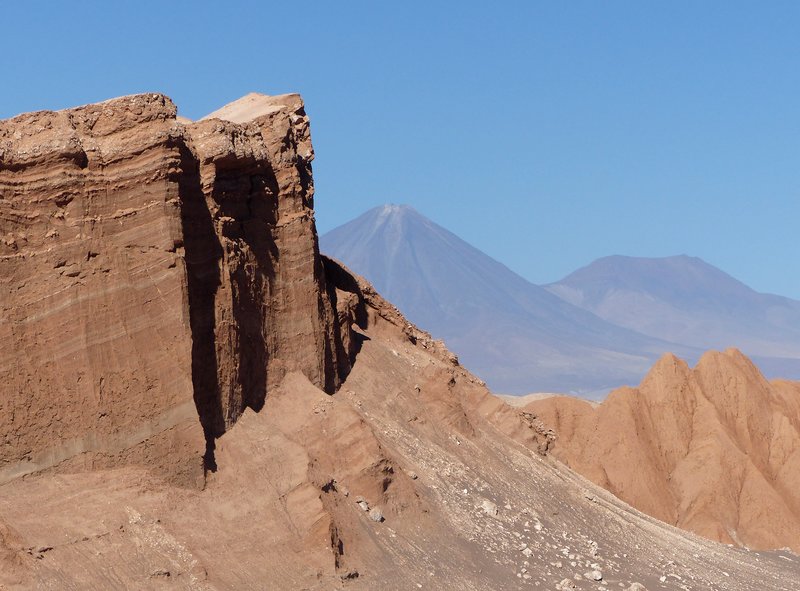 Towards the northern end of the road through the Valle de la Luna, not too far from the park entrance, you can find the tallest of the dunes, which many visitors like to climb to get unrivalled views of the valley. Unfortunately when we were here I was having a few problems with a dodgy knee and I decided not to risk the climb, especially as I know dune climbing can be particularly challenging. Chris however had no such problem, so he set off up the ridge with our guide Paula while I waited below with my camera. The sun was beginning to dip in the sky by now and the light was great for photography, bringing out the ridges and folds in the rocks and the patterns made by wind on sand.

Some people climb the dune for sunset photos by the way, although we had other plans – or rather, Paula did! I guess it might be rather busier then, but even an hour or so before sunset Chris and Paula didn’t have the hill to themselves, and a steady stream of people were heading up. I watched for a while to see them appear at the top but soon wandered off to take my own photos. As it happened, it was a longer climb than either of us had realised and also, on reaching the top, they went first to a viewpoint looking south, away from where I stood and back down the valley where we had come from. Later they did move to the ridge above the parking area, by which time I had returned and was standing there with our driver looking out for them – good timing! 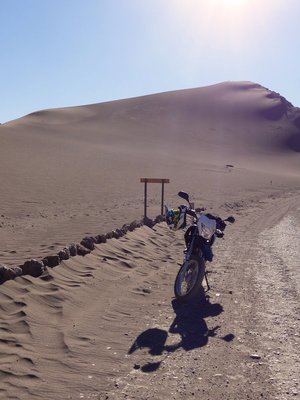 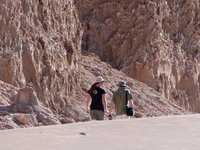 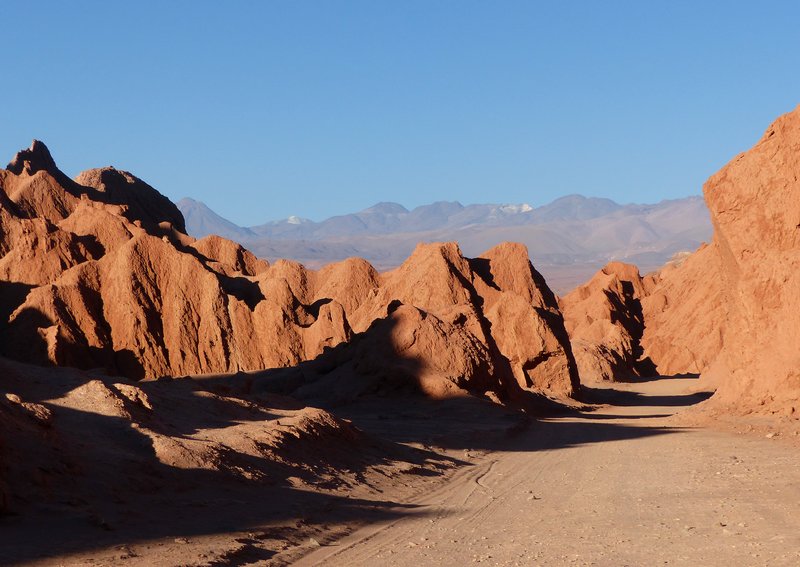 On the opposite (east) side to the Valle de la Luna, of the main route 23 road between San Pedro and Calama, lies another valley that is a big draw for visitors, the so-called Valle de la Muerte or Valley of Death. There are two theories as to how it came by this rather gruesome name. One (which our guide Paula favours) is that a French priest visiting the valley commented that it looked very like Mars, which is “Marte” in Spanish, but his accent was so strong that it was heard as “Muerte” – Death. The other theory is that many travellers who passed through this valley met their death here – whether through the harsh conditions or through being attacked by bandits in this remote spot.

Certainly the colours here bear out the Mars theory. Where the Valle de la Luna is for the most part golden and white, here the rocks and sand glow red, especially late in the afternoon as it was when we visited. There is no real road through the valley – more of a sandy track, which is impassable in a regular car although a 4x4 will make it just fine. But the best way to appreciate it is to do as we did and leave your vehicle for a walk amongst its craggy rocks and ever-changing dunes. Taking of rocks, is it just me that thinks the outcrop in one of my photos looks like the head of a gorilla?!

The Valle de la Muerte is not part of the protected area, the Reserva Nacional Los Flamencos, so no entry fee is payable and sports such as sandboarding and mountain biking are permitted. You can arrange these through many of the tour agencies in San Pedro, if interested. When we were here, however, there seemed to be nothing of this sort taking place and I for one was thankful. Paula, Chris and I had the part we were in to ourselves and the atmosphere was magical. 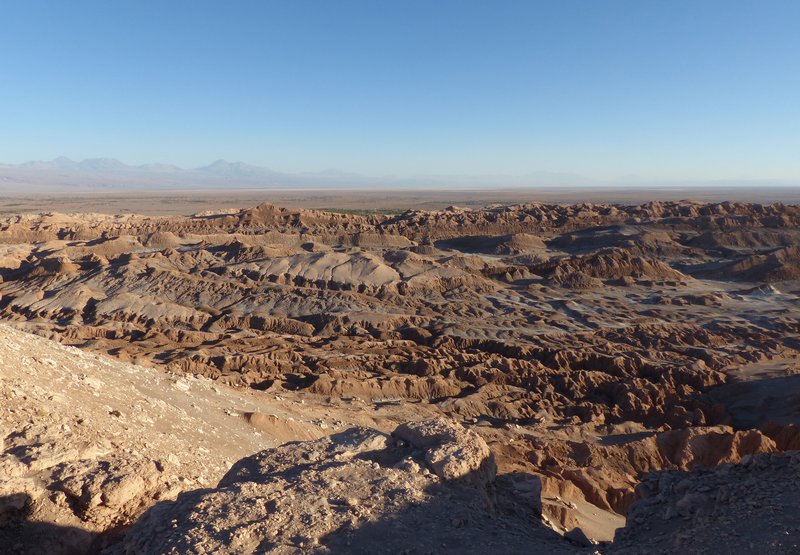 There are several places in the area around San Pedro which are popular for sunset views. Many climb the big dune in the Valle de la Luna or head to the Valle de la Muerte, but Paula’s recommended spot for us was the Mirador de Kari – not least because it doesn’t necessitate any climbing which would have been beyond my dodgy knee.

Access is down a rough road that turns off route 23 just a short distance beyond the entrance to the Valle de la Luna. You are outside the reserve here, so no need to pay any entrance fee. The parking area is set a little way back from the cliff edge, and as we walked over this stunning vista appeared. Even without a sunset it is an amazing view. You are standing on a ridge of the Cordillera de la Sal, the mountain range that was formed when an old dried-up salt lake was forced upwards and folded by the movement of tectonic plates. Below you is the Valle de la Luna, beyond it the flat desert plains around San Pedro, and near the horizon a white streak showing where the Salar de Atacama lies. Further still the mountains and volcanos of the Andes can be seen through the haze, including Volcan Láscar. 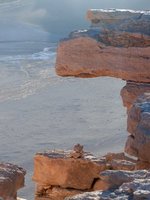 The best-known feature here, and the one that everyone wants to photograph, is the Piedra del Coyote – Coyote Rock. It gets its name from the scenes in the Roadrunner cartoons, in which Wily Coyote pushes a huge rock down onto the roadrunner but always fails to finish him off – this rock looks just right for such an attack. A popular photo opp involves standing on the jutting rock, but although I have a good head for heights when on solid ground, this looked a bit unsolid for my liking! So I contented myself with scenic photos, which in any case both Chris and I prefer to taking pics of each other.

When the sun sets, turn your camera the other way, towards mighty Volcan Licancábur standing over the town of San Pedro, to see the mountains glow red in the last rays of light. These are among my favourite images from our whole time in Chile. They were taken in the parking area as by this time we had followed Paula’s suggestion to head back to the car, where she and the driver had put out some snacks (olives, crackers, cheese) and poured pisco sours for us to enjoy as the sun finally set – a wonderful way to bring our tours in the San Pedro area to a close. 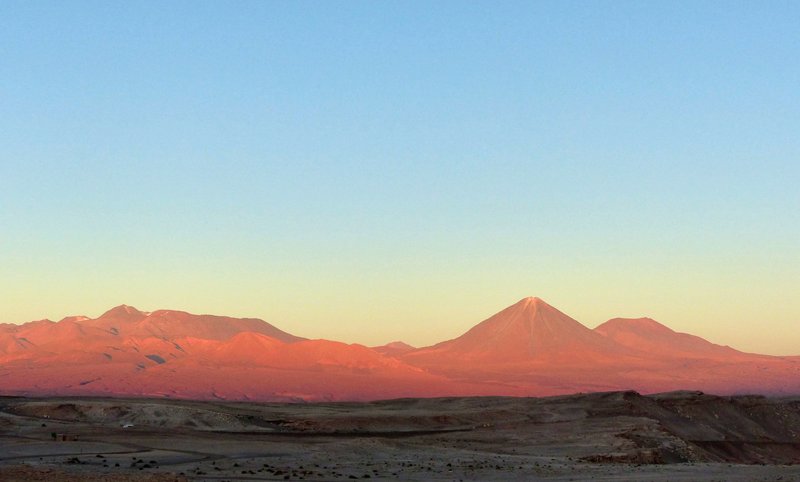 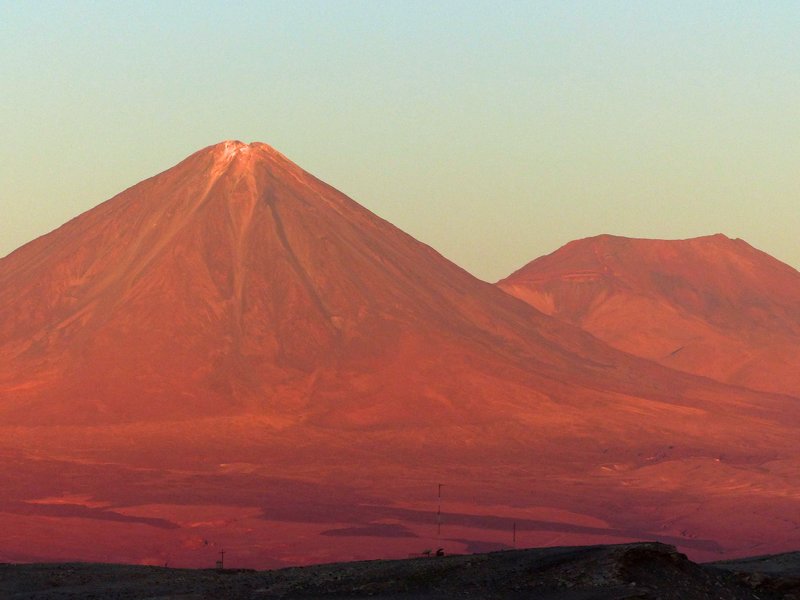 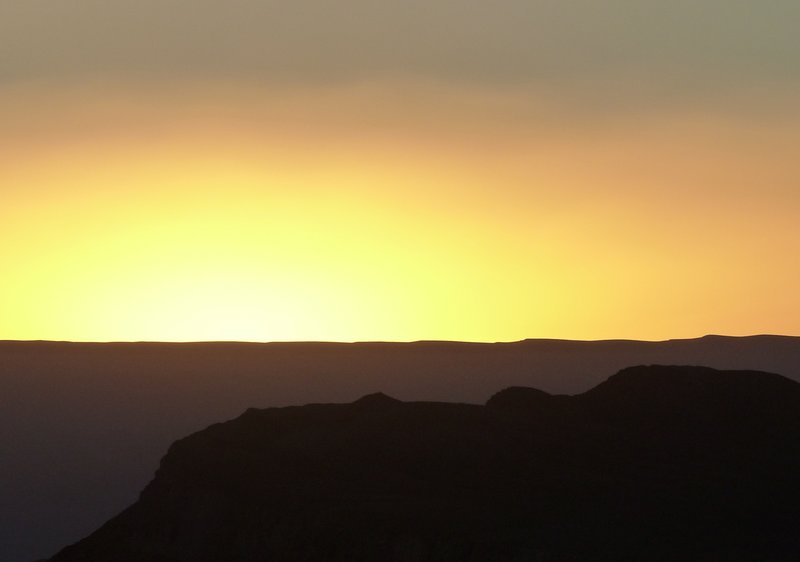