“Valparaíso, how absurd you are…" 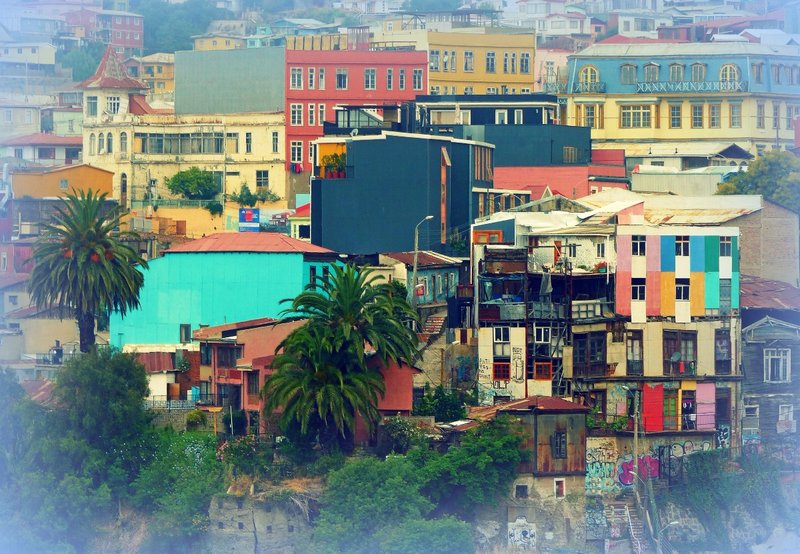 Valparaíso means “Valley of Paradise”, and while many may not see this rather gritty and in places run-down port city as any sort of paradise, for many others, myself included, it has plenty of charm.

Pablo Neruda, the Chilean poet, said of it:
“Valparaíso, how absurd you are… you haven't combed your hair, you've never had time to get dressed, life has always surprised you.”

This is one of the oldest cities in the country, and was for centuries the most important port on South America’s Pacific coast, being the first that large ships could dock in after rounding Cape Horn. Like all port cities it is something of a melting pot, attracting immigrants from all over the world, and after our few days in Santiago we were struck by the much wider diversity of the people we saw on the streets here than in the capital [living in London we expect cultural diversity to be the norm in a large city].

The city is famous today for its neighbourhoods of colourful houses that spill down the hillsides towards the port. They are a magnet for artists, for photographers, for writers and are especially known for the street art that adorns many of the buildings, which was one of the main things that attracted us here. 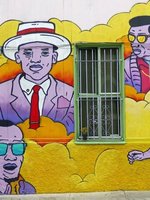 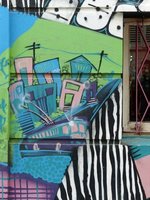 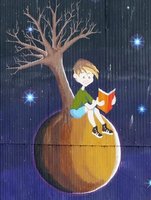 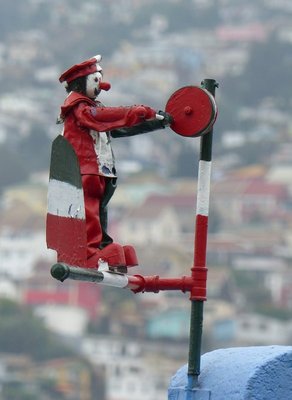 This is one of the oldest cities in the country, and was for centuries the most important port on South America’s Pacific coast, being the first that large ships could dock in after rounding Cape Horn. Its economy thrived in the 19th century in particular, due to the port, and immigrants were drawn here from all over Europe. Here was Latin America’s first stock exchange, the continent’s first volunteer fire department, the country’s first public library and the oldest Spanish language newspaper in continuous publication in the world.

As Valparaíso grew its buildings started to climb the steep hills that surround the port area. Poorer people built their houses with cheap materials such as wood and corrugated metal, covered with the easily available paint used on the ships in the port. And in some of the prime spots those immigrants who had made their fortunes in industry or finance, thanks to the thriving port, also built here, high above the working city. In the 20th century however the city’s fortunes declined with the opening of the Panama Canal and consequent reduction in shipping in the southern Pacific. But more recently it has seen something of a renaissance, helped no doubt by an increase in cruise boats visiting the port which helped to put it on the tourist map.

Today its neighbourhoods of colourful houses, still looking much as they did when first built in haphazard fashion, give the city a unique charm. They are a magnet for artists, for photographers, for writers … and naturally for tourists. The city has been a World Heritage Site since 2003, listed as “an excellent example of late 19th-century urban and architectural development … characterised by a vernacular urban fabric adapted to the hillsides”.

The port is busy again, with container ships as well as cruise ships; the city has become a major educational centre, with four universities based here; and Chile’s legislature sits here rather than in Santiago. Valparaíso is a city on the up, both figuratively and literally!

Our main reason for wanting to visit Valparaíso was the large amount of street art to be seen in its hillside neighbourhoods known as cerros. No doubt this started unofficially and just here and there, but today it is a major feature of the city, helped by a tolerant city council who overlook the fact that graffiti and street art are illegal in Chile and have ensured that there are no regulations that explicitly outlaw it here.

Instead it is widely accepted and even welcomed by local businesses such as cafés and shops, who recognise that it will attract visitors. Many owners nowadays will commission street artists to create a design for their wall, while many artists who spot a likely wall space will pitch their ideas to the owner and collaborate to produce a design with which both are happy. 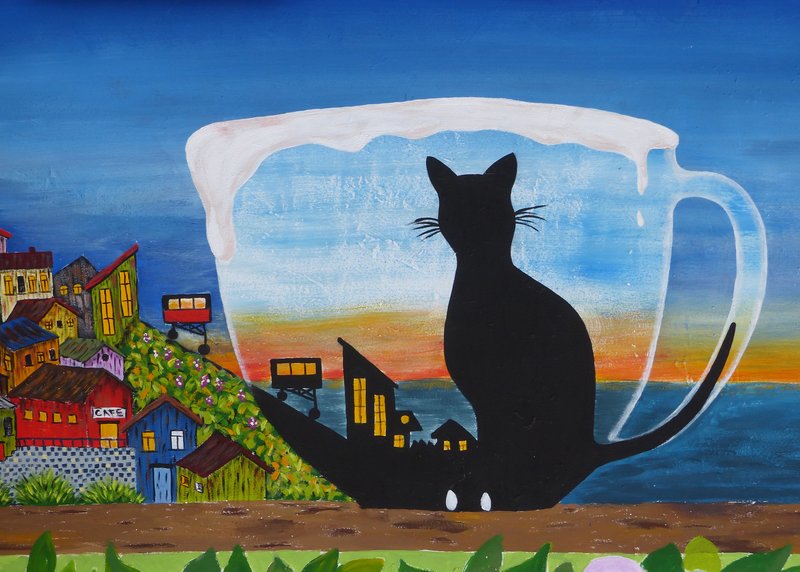 One of the best known of the city’s graffiti artists is Inti, a local who paints huge, vibrant murals influenced by the ancient culture of Chile. The photo below (taken from Paseo Atkinson on Cerro Concepción) shows one of his largest works which portrays two Latin American mythological figures, the Kusillo and the Ekeko (the god of abundance and prosperity). As well as here in Valparaíso and elsewhere in Chile, his street art can be found in many other countries around the world, including Belgium, the US, Slovakia, France, Lebanon, Spain, Germany, Poland, Norway, Turkey, Peru and Puerto Rico. You can see more of his work on his Flickr feed. 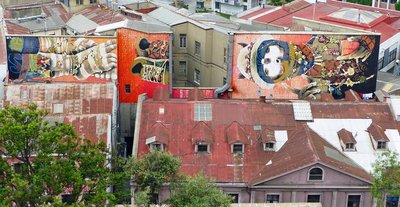 As we only had a few hours in Valparaíso we agreed with Sergio that it would be best to focus on one part of the city, and he recommended Cerro Concepción as there we would be able to see plenty of the street art we were most interested in, as well some interesting old houses and great views of the city. Cerro Concepción is a ‘zona típica’ (designated historic area) and it is easy to see why. It can be reached by the funicular of the same name (the city’s first, incidentally, opened in 1883) but we drove up as some of the funiculars were out of action that day due to a strike by government workers. We then had a lovely stroll along pretty Paseo Atkinson, from where you get super views of the city and port below, and the adjacent streets. 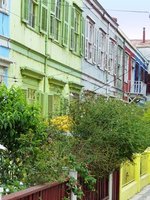 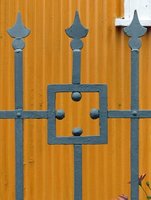 Sergio’s first choice of lunch spot, Restaurant La Concepción on Papudo, was booked out by a tour group, so we had to look elsewhere and in strolling around the streets of this pretty neighbourhood we came across the Café con Cuento. Sergio had never eaten there, although he had been there for coffee, but all three of us agreed to give it a try and it proved to be a great spot for a light meal. There are few tables on a small terrace outside but we decided to eat inside where you are surrounded by shelves of books as the café doubles as a bookstore. Sergio pulled down a couple of these to talk about and show us some other parts of the country, so we happily passed the time until our meals arrived (service is rarely speedy in Chile and here was no exception). When the food did come, it was very good. My quesadilla was delicious – you can choose any three ingredients from about eight, so it's easy to get something to your taste (I had mushrooms, corn and peppers). I also loved my fresh lemonade with mint, ginger and honey. The others both had panini – Sergio’s with salmon and avocado, and Chris’s with goats cheese, tomato and pesto.

As Valparaíso grew away from the port and up the surrounding hills, people needed easy access to the homes they built there, and so the city’s network of funicular railways, known as ascensores, was developed. There seems to be some uncertainty about the exact number of these – I have seen references to 26 at their height (late 19th / early 20th centuries), but also seen 28 and even 33 mentioned. The same is true of the number currently in operation, partly due to frequent repair work which closes one or more from time to time, but most sources describe between six and eight.

Ascensor translates as “elevator” but only the Ascensor Polanco is a true lift or elevator – all the rest are cable cars. The oldest is the steam-operated Ascensor Concepción, also known as Ascensor Turri, which opened in 1883 and is still in service today (albeit closed by a strike when we visited).

We wanted to experience these iconic forms of transport so after spending some time exploring Cerro Concepción we headed to the Ascensor Artillería, one of the largest. This was built in 1893 to transport the staff of the naval school which sat at the top of this hill on Paseo 21 de Mayo (nowadays the National Maritime Museum). This funicular is 175 metres long and climbs a gradient of 30 degrees. We travelled from the lower station on Plaza Aduana, site of the former Aduana or Customs House. We had to queue a short while as this is one of the most popular of the funiculars because of the excellent views it offers of the port. The fare was 300 pesos for a single trip – we didn’t return by the same route but were picked up in the car by Sebastian after briefly exploring the rather touristy craft stalls on the Paseo 21 de Mayo.

I'll finish this entry by sharing some more of the street art I loved here in Valparaiso. 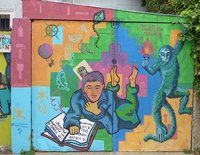 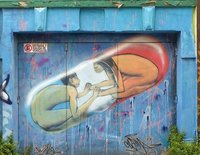 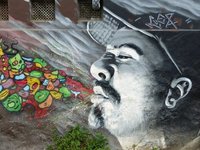