Humpbacks, but no orcas

The Café Demeter sits immediately opposite the Nichols Street apartments so was an obvious choice for breakfast today - good strong coffee and OK muffins.

We had made reservations to go whale watching with one of many companies operating out of Friday Harbor, Spirit of Orca. But we weren't due to leave till 11.00 am, so to put us in the mood we first went to the Whale Museum. Your $6 entrance fee here helps to support conservation efforts so it is well worth supporting, and you will also learn a lot about whales in general and the resident orca pods of the Salish Sea in particular (known as pods J, K and L). We especially enjoyed reading about some of the specific whales who have become known to scientists and researchers over the years, such as long-lived Raggedy. I also liked the beautiful stained glass windows. 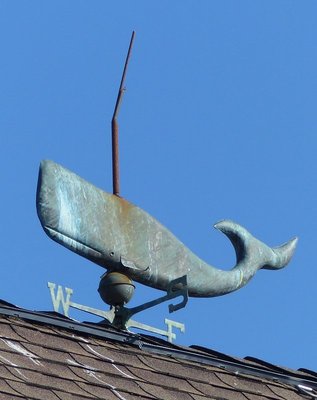 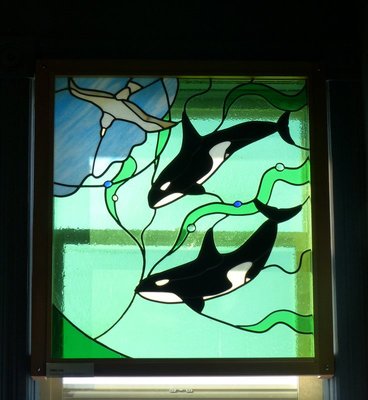 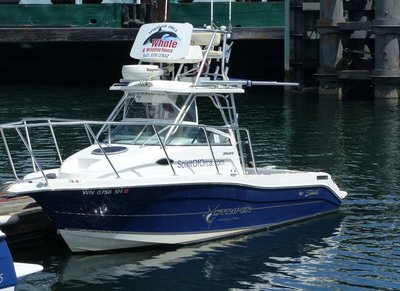 The Spirit of Orca

After our visit to the museum and a coffee it was time to head to the boat and meet up with Ken, our guide and captain. We had chosen this company because of the small size of the boat. The bigger boats cost less but you are jostling for views with lots of other people; the Spirit of Orca takes a maximum of six. We shared our trip just with a young couple from LA and their baby.

As we left the jetty Ken prepared us for disappointment. The only resident orca pod which had been in the area recently, had last night been seen heading west, out to sea. However, we still hoped to see some of the transient orca who visit these waters. 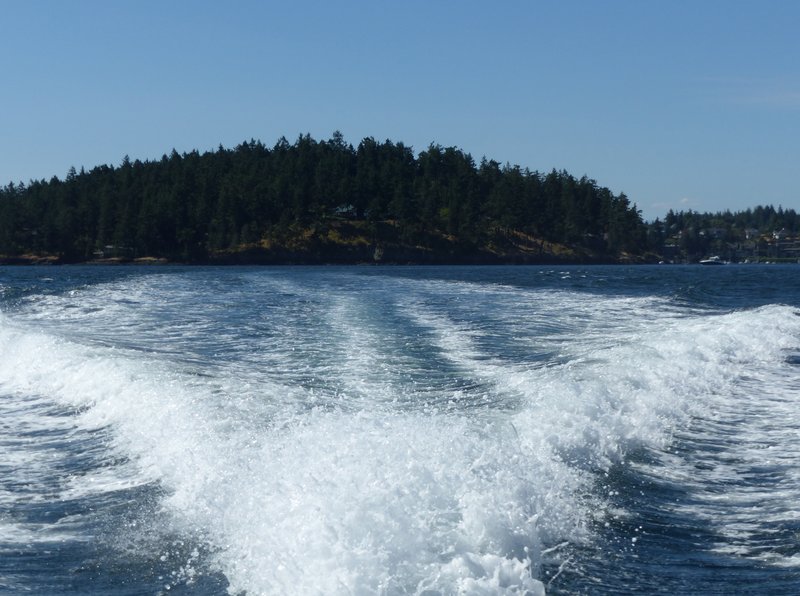 Heading out to sea

But although Ken took us quite a long way to the north, and although we had a lovely ride and enjoyed being out on the water in the sunshine, we saw no whales that morning. We did see a few bald eagles, and some harbour seals basking on the rocks, but no orca and no humpback whales, which are also often seen here. 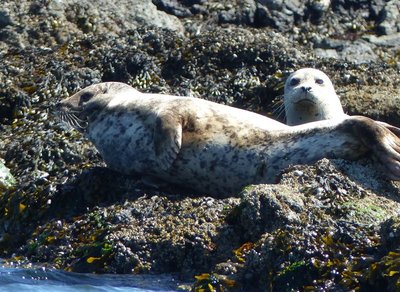 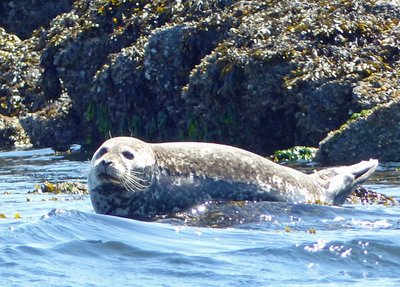 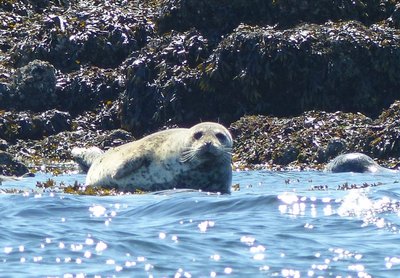 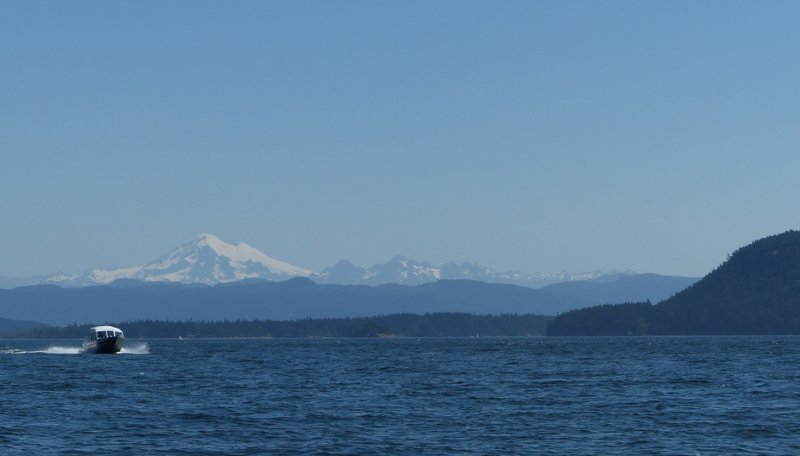 On returning to Friday Harbor Ken offered to take us out again in the afternoon, at no extra cost, as he had space on the boat. His suggestion was that we try to find some humpbacks who had been seen that morning west of Victoria, Vancouver Island. We decided to take him up on this kind offer, so after a quick lunch at the Cheesecake Bakery by the boat landing we were back on board.

This time we were joined by a family of four from St Louis. They agreed to the plan to hunt for humpbacks rather than orca, and off we went. It was a long ride in worsening seas, but rather fun despite the splashes.

After about 90 minutes we arrived at the spot, where a handful of other small boats were gathered (it seemed that the larger ones didn't make it out this far - maybe they can't travel fast enough?) And we did see whales! 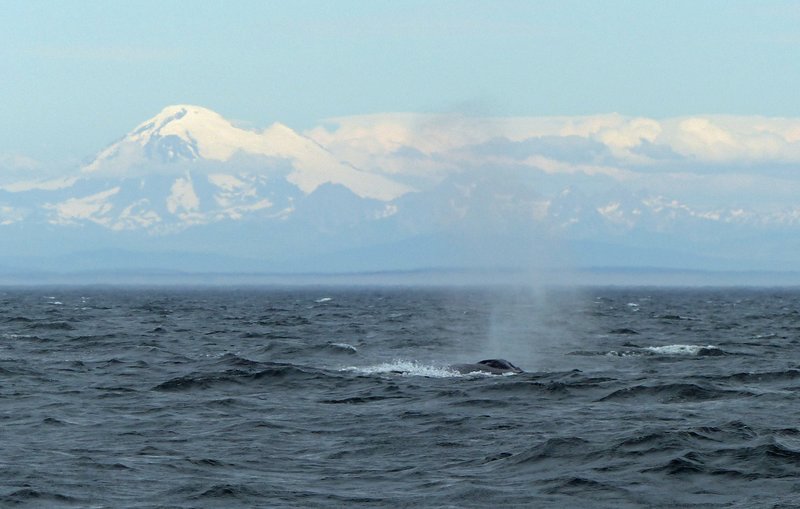 Two or three were in the vicinity, blowing and diving from time to time. The seas were choppy (one of the other pilots, on Ken's radio, described it as a 'washing machine') so it was hard to take photos, and owing to the long journey out we couldn't stay as long as we might have liked, but at least we had seen them. 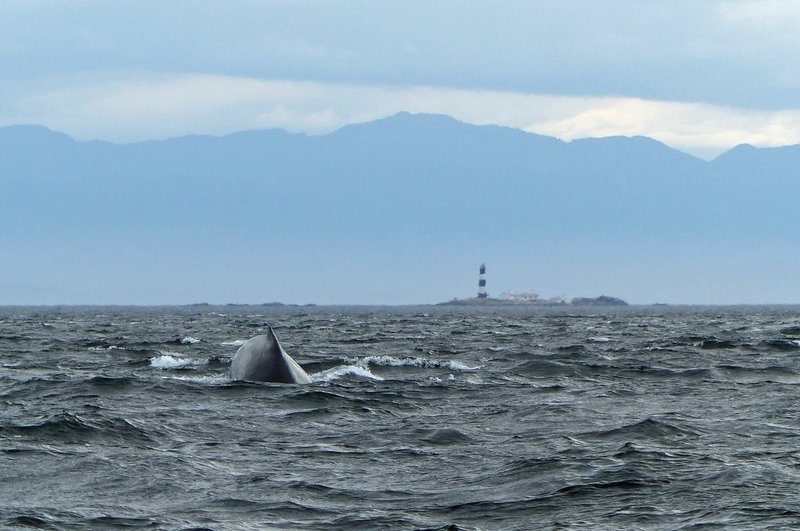 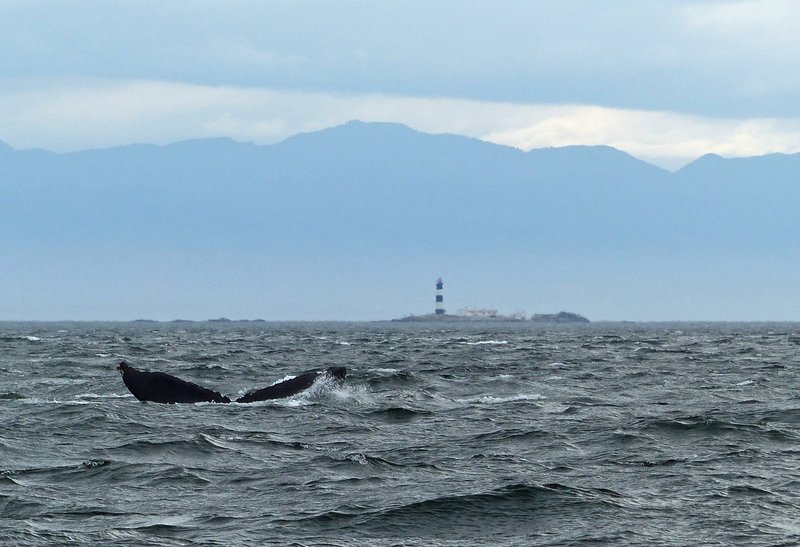 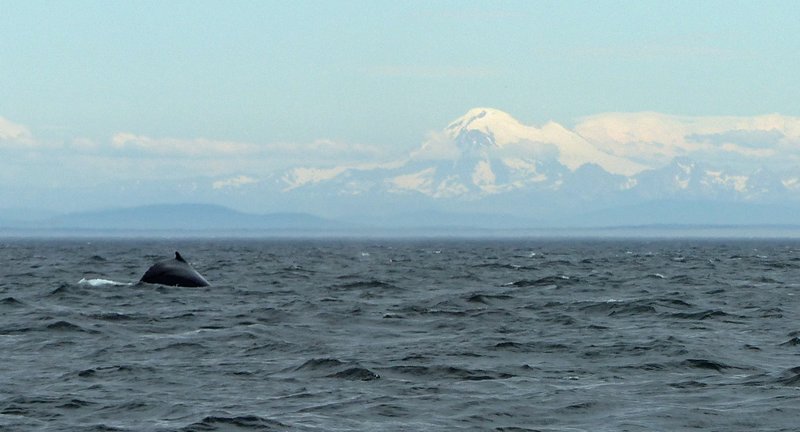 It was a long and rather chilly ride back. On the way, we slowed a couple of times to see bald eagles, including a chick, and the harbour seals again. But it was whales we had really come to see, and we had done so. We were very grateful to Ken for offering that second chance, and very glad we had taken him up on it. 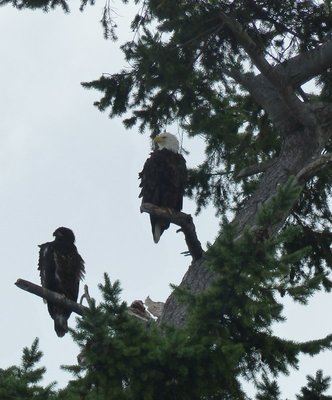 As part of the cost of the trip Ken sends everyone a set of his own best photos from the day. You can see these, and read his blog entry about it, on his website: Humpbacks West of Victoria. I do encourage you to check this out and to look at some of the other entries too, if only to see what we might have seen, with better luck. 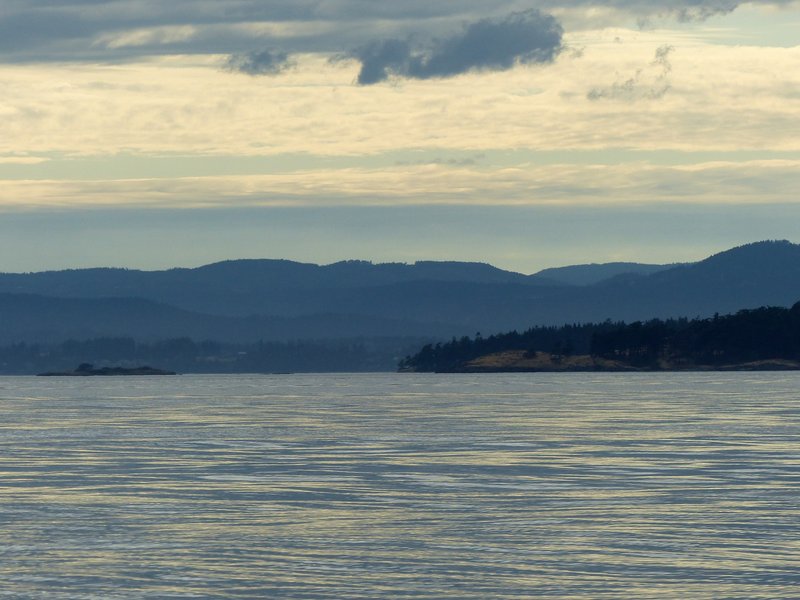 Late afternoon on the Salish Sea

While we were disappointed, naturally, not to see orca, we still had a fabulous time out on the water and were so grateful that we got a second chance and at least saw the magnificent humpbacks. I do recommend Spirit of Orca and Captain Ken should you be looking for a whale-watching experience in Friday Harbor.

We returned to our apartment rather tired and cold. The weather had deteriorated a little here in town too, so we dressed a bit more warmly for our evening and headed off in search of dinner. We found a good one at Downriggers on the waterfront. We decided to start with cups of soup to warm us up - Chris had tomato and I had the clam chowder. Both were excellent and came with warm bread and the restaurant's signature sundried tomato butter - lovely! Chris then had the mac and cheese with spicy prawns, and I had one of the day's specials, halibut with salsa, brown rice and broccoli. Both dishes were very good, and washed down well with a Seattle beer, Rueben’s Porter. A second beer each and we were both full, as well as tired from our long day out on the water, so an early night was in order. 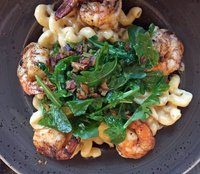 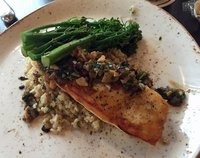